Sometimes corporate synergy is planned, while other times it's by happenstance. With the debut of Wonder Woman Lasso of Truth at Six Flags America, the chain's park just outside of Washington, DC has managed to hop on the bandwagon of one of the hottest superheroes in pop culture right now. While the theming elements of the ride draw more from the heroine’s comic book roots, undoubtedly guests will be drawn to the attraction because of the popularity of the Gal Gadot blockbuster film enjoying its second week on top of the domestic box office. 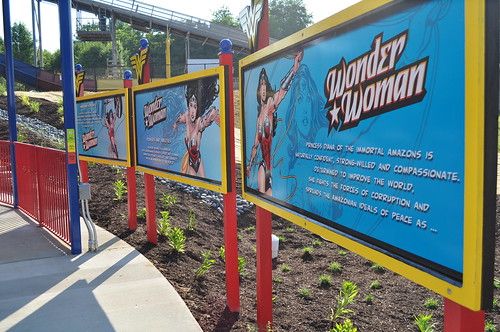 The Wonder Woman brand has certainly taken a huge bump in awareness since the chain announced the addition last September, and whether deliberate or a bit of luck, Six Flags could not have timed this week’s opening of their newest attraction any better. On behalf of Theme Park Insider, I was invited by the park to take a spin on the newest ride, but the opinions presented are my own.

Wonder Woman Lasso of Truth is a standard Star Flyer from Funtime, and towers over the park at 240 feet. That makes this ride the tallest attraction in the park, taller than nearby Joker’s Jinx and Superman: Ride of Steel. With a height requirement of 44”, many children not yet tall enough to ride the park’s big coasters will have an opportunity to tower over them while riding this giant swing.

If you’ve never experienced a Star Flyer attraction before, it’s very much like a very tall, comfortable carnival swing. Guests are secured into cozy, yet non-restrictive bucket seats with a standard locking crossbar and a seat belt that will fit snugly around the midsection of most guests. The design of the seats allows guests’ upper body with a full range of motion to enhance the feeling that your flying. 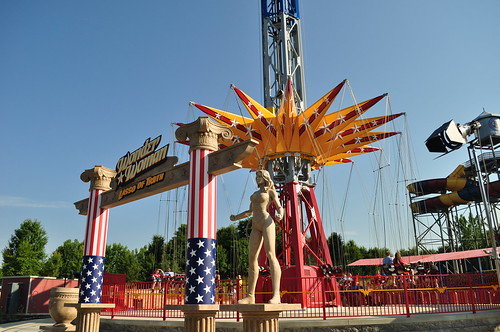 The ride cycle starts by lifting the carriage up the tower with a slow spin. As riders get higher, the spinning rate increases until guests reach a speed of 40 MPH. At the very top of the ride, guests are treated to some amazing views of the park and surrounding landmarks. On a really clear day, I wouldn’t be surprised if guests might be able to spot the Washington Monument and US Capitol on the western horizon. Just as riders think the ride is coming to the end and the carriage begins to descend and slow, it then speeds back up and ascends a second time to the top of the tower seemingly spinning even faster than before.

Wonder Woman Lasso of Truth is certainly not a destination attraction for Six Flags America, nor does it present the same thrill quotient of the adjacent Superman: Ride of Steel. Aside from challenging riders’ acrophobia, the giant swing does not batter riders with intense forces, making it rather approachable for virtually anyone clearing the 44” height restriction. That’s a perfect scenario considering the attraction's Wonder Woman branding is likely to bring to Six Flags America this summer. With Wonder Woman appearing again on the big screen in this fall’s Justice League movie, the drawing power of the mythic Amazon is not likely to lessen any time soon, and whether deliberate or not, Six Flags is poised to reap the benefits of their DC Comics license.

Wonder Woman Lasso of Truth opened two weeks ago at Six Flags Discovery Kingdom, but it is an entire different ride.
https://youtu.be/UOSBHHgVNMg

Well, at least it isn't another roller coaster!

Is it wrong that Six Flags America is one of my favorite Six Flags parks?