Apologize for my Rant.

Sorry for my Ranting. It's just...I'm just a Huge Smurfs fan, but I'm also a Disney fan.

(sigh) I'm going to college, I need a job at Disney to make movies. The Smurfs are just what I need for an Animated film. In this version, You'll see new characters like Oscar, an unnamed talking ferret and much more. Will have a Musical numbers like in Frozen, story will be dark and gritty (similar to The Lion King), will have drama and the characters will not be annoying, that's it.

This is my concept of my own character, Oscar (a young boy who got shrunk in a size of a smurf and join them on an epic adventure) 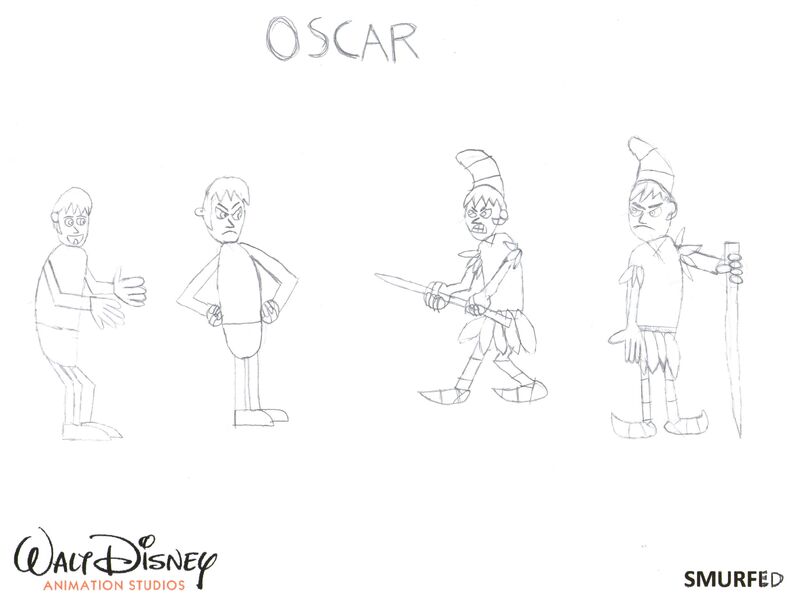 I Love the Smurfs, but some people always said "Smurfs sucks", "Smurfs? No...Just No", "I don't like The Smurfs". All those makes me Angry and Mad. But I love Disney, too. But I can't get way from my childhood again.

You see, When I was a kid, I watched The Smurfs on Cartoon Network, until one day, I have moved to Tijuana, and I watched all Disney films.

I would be so Happy to see The Smurfs at Disney Parks. I mean, Some rumors say that The Smurfs will come to Universal Orlando to replace E.T. Adventure. Thank God, that this ride was scrapped. If my Movie is a success I would make a Flying Dark ride with The Smurfs, similar to the one that was scrapped, but with my own new characters.
Some Many people will say about Avatar. this is more ranting if you say that.

For someone who has Facebook, Will you please help me. Send a message to an Facebook account, Animation Lookback. He IS the responsible of my problem. He hates "Cloudy with a Chance of Meatballs", but he didn't know that's Nostalgia Critic's favorite movie. I'll wait for his video, so that AniMat can response about it.

But I must warned you, he said that he hates Cloudy. you should write "I know you have Cloudy" don't forget.

I'm Cool Down. Thank You.

What... I'm very sure Smurfs is owned by Sony. I don't think Disney will ever make anything Smurfs related.

I know, but if I'll work for Disney, I have to buy their rights from Sony...or someone will do it for me.

Chances are if you work for Disney in a position with any capacity to acquire the rights to "The Smurfs" license, you wouldn't also be working on attractions in WDI and vice versa. Best of luck on eventually becoming an Imagineer though, it's a great thing to aspire to.

Phil B., Not only I'll design attraction, also I WANTED to make a Smurfs animated film for Disney. It will be "Dark, Gritty and Epic", it will feature Musical Numbers like in Frozen; and also feature my own characters, exclusively for my Movie, including Oscar, a main Human protagonist and a Unnamed Talking Ferret, Oscar's pet and a comic relief.

Gargamel and Azrael appears in the film, but they're not be the main antagonists, this time. The main antagonist will be "The Most Evil, Powerful and Strongest" professional Smurf Hunter, this villain will be just like Drago Bludvist from How to Train your Dragon 2, Lord Shen from Kung Fu Panda 2 and Shan Yu from Mulan. You'll see, Gargamel, Azrael and an unnamed obese guy minion hire this villain, in order to capture The Smurfs, until a terrible where a villain make Gargamel, Azrael and a guy into his minions.

the story will be a young boy from present time who got shrunk and get transported in Smurf Village and join them in an Epic Adventure.

I was thinking of adding a sad scene like in Mufasa's Death. Oscar's Father of his old girlfriend (like Gwen Stacy's death)

Phil B. Are you there, Hello?

Ok great Oscar. I applaud your enthusiasm and hope the best for you. You have a long road ahead of you. Even just becoming an Imagineer doesn't mean you get to pick and choose your subject matter to create into a theme park property. You'll need to work very hard for many years before you can make decisions as to what Disney will and won't bring to the parks, and even then it's not decided by only one person in the company. I look forward to perhaps one day seeing what you will be able to accomplish. Never stop dreaming, and always believe in yourself and your ability. Even if "The Smurfs" project never happens, there's a whole world of great ideas and stories out there waiting to be told, and it could be you who brings them into the world, whether through movies or theme park attractions. Best of luck!