Now in its third year, Screamland – the Halloween offering of Dreamland in Margate, UK – sees the park again scale up their ambitions for 2017 with six scare mazes and two alternate attractions. 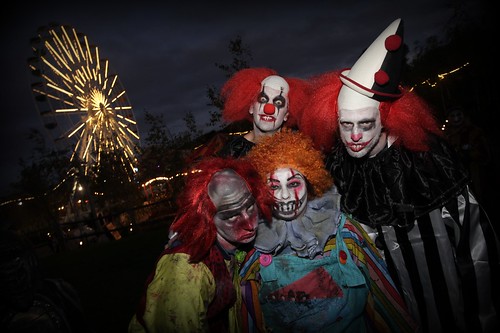 I was able to attend on a media preview but, aside from smaller crowds than you'd expect on a typical night, it felt already like the full experience. The quality of both make-up and performances from wandering scareactors was superb, and the park's attractions were again open to guests – including the star of the show, the historic Scenic Railway. (Which is, of course, twice as good in the dark.)

My favourite mazes of the night remained the returning double-bill of 'The Final Cut' (which is sadly being retired after this year) and 'Dead & Breakfast'. The Final Cut has been given a sci-fi theme throughout that keeps with the goofy fun vibe from previous years, while Dead & Breakfast cleverly builds a new narrative from the mythology established in previous iterations – with a returning character as a surprise toward the end. It's a smart way of keeping returning guests involved without needlessly throwing away a concept that still works for first-timers.

I was a little disappointed in 'The Brotherhood' after hearing rave reviews from other guests on the night. Perhaps I just had a bad run, but I've seen the bag-on-your-head, follow-the-rope concept deployed more imaginatively elsewhere. (Not least at Tulley's Shocktober Fest, which provides one of the best examples I've seen.) Good scares come from being imaginatively engaged in a concept first – but other than a bit of pre-maze spiel, there weren't any effects or characterisation to achieve that. No particular world existed within the maze, other than one of people yelling. 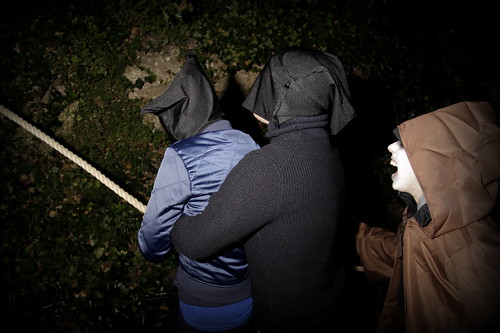 'The Legend of Crank Jack' almost fell into a similar trap (swap bags-and-ropes for crawling-on-the-floor) but ultimately I found it endearing for just being quite bizarre – and perhaps unintentionally 'meta'. At various points throughout, you can peek through flaps to see people in clown costumes backstage mundanely operating tricks and traps. It ends up being an almost Brechtian disengagement tactic, creating a commentary on the very nature of scare mazes. (I know, probably an over-reading, there. But still.)

We got genuinely trapped/lost in the second (walking, not crawling) half of the maze, new batches stacking up behind us for about 15 minutes. All the while, the clowns doing little but flashing lights and blasting air horns. There were probably 30 or so people in a tiny corridor by the time the scareactors had a chat with their managers and broke character to let us out. Again, presumably unintentional, but it kept to the 'scare attraction' theme all the same. “Hell is other people,” right?

'Punchinello's Revenge' takes the space of the small container unit at the back of the park that's been used for other mazes in the past. It's a shorter experience than the others, but the mirror maze works brilliantly – it's playful in ways I've rarely seen in such a conventional element. And by giving us an 'objective' (albeit a pretty disturbing one) to achieve, it offers a different kind of experience that keeps things narratively focussed, as Screamland typically does so well. 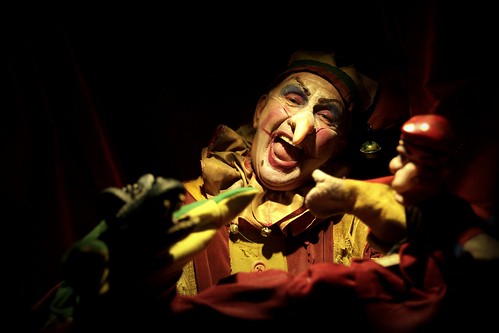 The nearby 'Prop Store' was a quick, curious experience designed to give younger visitors a taste of the scares without having to tackle a whole maze. (And offered a pretty good photo opportunity at its conclusion.)

The other non-maze 'extra scare attraction' was 'The Séance', an upcharge attraction that offers pretty much what it says on the ticket. Set in a genuine, abandoned Victorian folly at the edge of the park, it's a great example of the park using their resources to full potential.

Unfortunately, it was the one aspect of the night that still seemed in preview mode – I found a couple of the effects weren't polished enough for me to really suspend my disbelief, and the host's spiel wasn't quite yet slick enough. That said, a couple in my group looked on the edge of fainting at one point, and a couple guys acting too cool for it got genuinely freaked out. So perhaps I'm just a little jaded. I'd expect the whole thing to be much tighter by now, and it was nonetheless a joy to have diversity in the evening's offerings.

Similarly, the Screamland mazes are as much theatrical experiences as they are attractions simply designed to make you jump. Nowhere is that more evident than in what was my favourite maze of the night, 'Festino's Festival of Freaks' – which felt like a mini-Punchdrunk experience. After an introduction to establish the scenario, we're quickly split up as we enter the building proper, the 'backstage' of an abandoned freakshow. There's no particular route to follow, just a nightmarish landscape to stumble through, finding characters along the way. 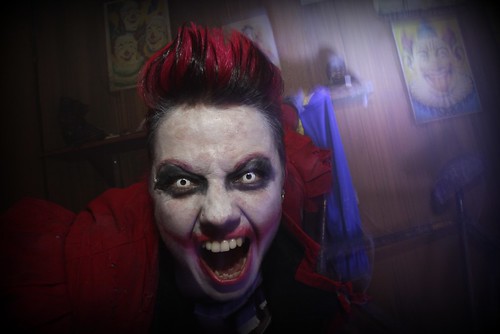 It's in moments like this that the performance work here really shines through. It's entirely possible to have proper interactions with the characters. They don't just jump out and yell at you – every actor in the space has a purpose and reason for being there, and it's often possible to probe and find out more from them, piecing together a deeper narrative. Which, in turn, brings the mazes more vividly and hauntingly to life.

This has been the 'house style' of Screamland since its first year, and it's great to see them sticking with it. Without the budget and resources of some of the bigger scare events in the UK, they're inevitably unable to compete with the number of actors and scale of the set pieces you'll find elsewhere. But by forging a unique identity, Screamland has become one of the essential events in the Halloween landscape. I hope this identity continues to develop in years to come.

Good to see some love for Dreamland. How is the park since its reopening?

It's looking great - they've done an exceptional job bringing the place back to life, in a way that honours its roots while finding a contemporary relevance. And the Scenic Railway renovation honestly made me a little emotional the first time I rode it. The pure *love* that's gone into restoring that ride in particular is incredible.