Park of the Week: Islands of Adventure
Discussion Forum - Other - Thread

Lord of the Rings: Back on the table?

J.R.R. Tolkien's son has resigned as the Director of the Tolkien Estate:

This opens up the rights for a variety of uses that were previously restricted, including Theme Parks. Amazon has recently announced a new deal to create a LOTR streaming series based on this new availability.

Tolkien notoriously disliked Walt Disney, rejecting Disney illustrations for his books and is quoted as saying:

"I recognize Walt Disney's talent, but it has always seemed to me hopelessly corrupted. Though in most of the 'pictures' proceeding from his studios there are admirable or charming passages, the effect of all of them to me is disgusting. Some have given me nausea"

What do you think? Does this open up the possibility of a deal for a themed land? Does his distaste for Disney mean the rights will be more likely to land elsewhere?

Universal does need IP for those 3rd and 4th (oops! those 4th and 5th parks) on the Lockheed-Martin property in Orlando.

I wonder if there's any cash left in the coffers after all the expansion over the last several years?

Let's see. I could go for a park themed to the classic Universal monsters, Middle Earth, Nintendo, Fantastic Beasts, and, oh yeah, Hello Kitty (especially that Chucky Hello Kitty that Douglas talked about in his USJ trip report).

I could definitely see Universal picking this up for the new property over by Lockheed-Martin, Tim. I'm sure Comcast/NBC has plenty of money left lying around, if they are willing to spend it. That seems to be no problem for them lately -- they are investing heavily in their theme parks.

I like your ideas for themed lands. An actual "Jurassic World" land would be great and they could keep the classic Jurassic Park over in IOA for nostalgia.

This is starting to look like a pretty great theoretical park.

Hello Kitty Chucky deserves at least her own theme park, if you ask me, although I'm leaning towards giving her an entire resort! 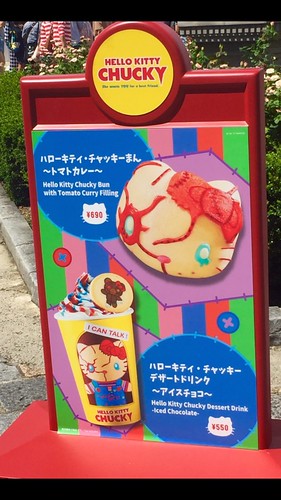 Zombie Kitty looks like much more fun than regular Kitty.

As a diehard Tolkien and LotR fan, who shares many of Tolkien's religious, aesthetic, artistic, and cultural concerns, this new deal concerns me greatly.

I can get past the new Shadow of Mordor/War games, if only on a gameplay level, but if they are any indication of whats to come, I will be bitterly disappointed to the point of genuine anger and rage.

Amazon will try and push agendas that are anathema to the core vision of Tolkien and divert so far away from what Tolkien's intentions that it will be hard to watch. Here's to hoping that by some miracle I am wrong.

As for theme park opportunities, that has me a bit more excited.

I agree, Blake. I hope that anything that is done with this material is up to hight standards of the material.

I'm also excited about theme park opportunities. I know Universal would do an amazing job with a LOTR park.

What would you guys like to see in a theoretical LOTR park?

I think these areas would be neat:

As I have posted previously, Christopher Tolkien and the estate have been the hang up, and there have been family members open to more liberal rights usages. That has now changed. With the negotiations to Amazon and the recent settlement, all things are now possible. I will point out that Peter Jackson does have a relationship with Universal and the theme parks, and while the Kong was not completed at my last Orlando trip, I really like it at Hollywood. If that is what is being planned down the road in Orlando, I am not sure I could contain myself.

Here is what needs to happen, however. IF they do get theme park rights. They need to put the same amount of love and attention t detail that they did in Harry Potter. Middle Earth can easily integrate into a theme park environment. You can have the village of Bree with the Prancing Pony restaurant and even an inn that people can stay at. Having it down the road distances it from the Potter franchise due to the obvious similarities. A walk through Hobbiton to scale. Universal has proven they can pull off the attractions. The way you pull off a flying attraction would be on an eagle, of course. The mines of Moira would be in a mine car. But this is Middle-Earth. You are going to need at least three to four huge attractions. You need a Mirkwood, so I say show up the overly short Avatar river ride with a 15-20 minute attraction that starts in Mirkwood and goes to Laketown. Or starts in Lothlorien and ends after an orc battle. The possibilities are endless. Since Disney is wanting to integrate role playing into Star Wars land, how about your own ring journey once you check in? Have a final Mount Doom attraction? But I guess you get to keep the ring...

There isn't enough technology now a days to do a decent LOTR theme park.

According to my sources...

Middle Earth - Universal won the court case about 9 months ago to use the middle earth franchise in their parks...it has been radio silence since then...assuming they are waiting for the new park as Comic Land and Marvel Land are the only areas right now in need of retheming (Zelda is taking Comics Land and Universal is holding out on Marvel until Disney sweetens the pot)...

Nintendo Land - I already covered this on a different thread, but Mario and Donkey Kong and possibly other Nintendo properties would be at the new park

Fantastic Beasts - Universal signed a contract for the theme park rights to this franchise, but then radio silence since then. I would assume the are holding out for the new park

Jurassic World - I would think this would be a good idea for the new park, but haven't heard anything

Hello Kitty - I believe Universal has the US theme park rights, but could be mistaken

Dreamworks Properties - Comcast bought Dreamworks animation so all of the properties they have could be used in any park...interestingly they are known to be working on sequels for every one of these except for Captain Underpants...
Shrek, Puss In Boots, Kung Fu Panda, How to Train Your Dragon, Madagascar, Trolls, Captain Underpants, Boss Baby, Croods

and has a joint venture for:
Rocky and Bullwinkle Show, Mr. Peabody and Sherman, George of the Jungle

and has licensing rights to:
Dick Tracy, Gasoline Alley, Broom-Hilda

We also know that someone signed a contract for with LionsGate for theme park rights in the US. This doesn't sound like Disney's style, and no one else has said anything about it, so I would assume that Universal is quietly sitting on it. This would give them the rights to:
American Psycho, Saw, Total Recall, Young Guns, Dirty Dancing, It's A Wonderful Life, The Hunger Games series, Twilight series, Step Up, The Day After Tomorrow, Divergent series, Shaun the Sheep, Hellboy, My Little Pony, Madea movies, Power Rangers, John Wick, Blair Witch, Point Break, Now You See Me, The Expendables series, Ender's Game, Texas Chainsaw, Cabin in the Woods, Transporter series

...and if they were really clever they'd go after something a little off the beaten path like getting ahead of the Matrix reboot they are currently working on.

I, as much as anyone else, would LOVE to see Middle Earth become a theme park reality, but if it's juxtaposed in a theme park next to Harry Potter, I think both franchises would be diminished.

I was under the impression that the Tolkien Family Trust won the lawsuit, and Universal had nothing to do with it, but I could be wrong. Christopher Tolkien was vehemently opposed to further expansion of the rights, and he recently stepped aside in his involvement with the trust to allow the Amazon deal to go through. His stepping aside would allow theme park owners to negotiate the rights, which he would have opposed.

I also agree that Middle-Earth next to Potter would be a problem for both, so if Universal got it, and planned for Orlando, it would need to be down the road. Professor Tolkien was very anti-Disney, and that has been pointed out in articles and interviews in the past, and was how Ralph Bakshi ultimately got the film rights, which is actually somewhat more faithful in some respects than the Peter Jackson films, but not all. It was a flop, and only half finished.

I agree that this would not fit in next to HP. However, it would make an amazing anchor for a new park!

If Universal is planning a new gate, and I think they are, it will be amazing to see what they design -- whatever the IP they select.