Coasting For Kids at Kennywood

Coasting for Kids is an event to raise funds for Give Kids The World Village in Kissimmee, FL, a non-profit dedicated to providing free fantasy vacations for critically ill children. This year the event was held, at different times, at numerous parks including but not limited to Busch Gardens Williamsburg, Sesame Place and half a dozen Six Flags parks. The last event was held at Kennywood on September 1, 2019. In order to participate, registrants were required to raise at least $100 for GKTW. In exchange, they got exclusive ride time on popular roller coasters. So it was a win-win situation.

I’d been planning to get an Uber to Kennywood but as luck would have it, I ran into a guy wearing a Coasting For Kids T-shirt during breakfast at my hotel so was able to hitch a ride with him. (It turned out that the reason he already had the T-shirt is that this was the third Coasting For Kids event in which he was participating this year.) Talk about providential! Once at Kennywood Mark and I got in the queue to check in and I immediately spotted Judy, a Facebook friend whom I met five years ago at a Coasting For Kids event at Dorney Park. Judy and I paired up; we hung together all day.

After check- in the group headed to Steel Curtain (we had ERT on Steel Curtain and Jack Rabbit plus two kiddie rides from 9:30am to 10:30am) for a presentation and group photograph. Those instrumental in coordinating the event acknowledged the top fund raisers and announced that our group had raised over $43,000 for GKTW. That was impressive! I believe that it’s the highest amount of funds ever raised at a Coasting For Kids event. 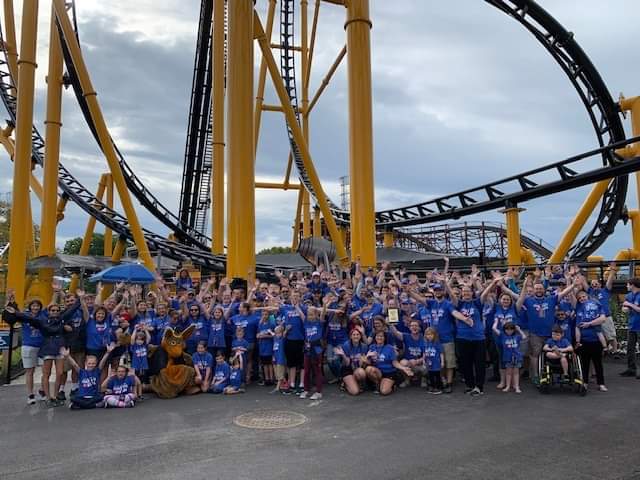 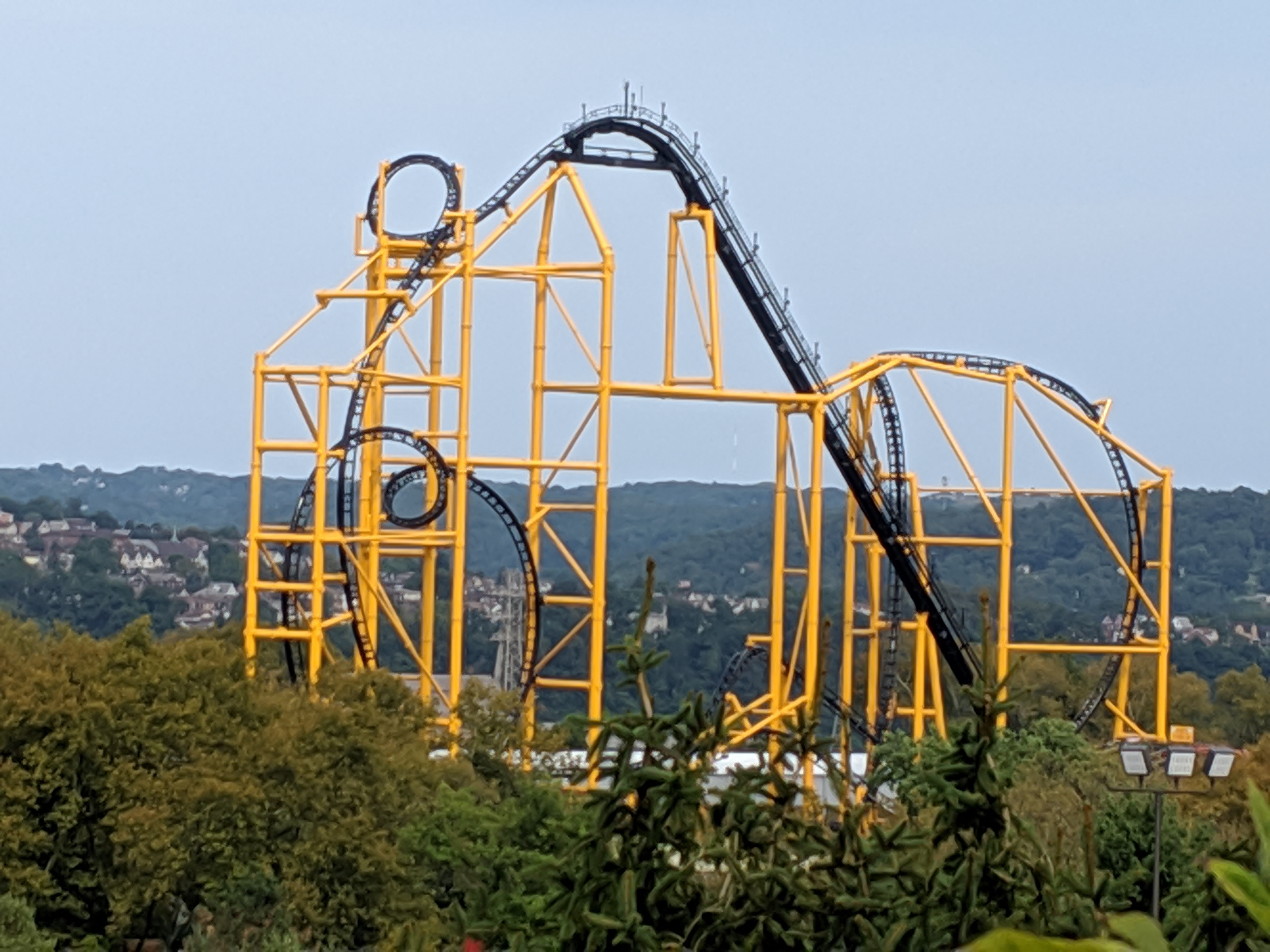 As to Steel Curtain, it’s a sight to behold, with a layout unlike anything I’ve ever seen. Judy and I headed for the back row, for no reason other than the fact that neither of us had a preference and that row was open. (We’re in the below photo.) The ride did not disappoint. From the steep lift hill with a view of the Monongahela River on the right to the final inversion it was a winner in our estimation. It was also exceptionally smooth. After one ride I had already picked out my favorite inversion, a dive loop. For the second ride we moved to the third or fourth row, where we remained. Surprisingly, no-one was waiting for our row so we simply stayed there and rode repeatedly. (We both felt that the G-forces were more intense near the front of the train.) At one point it began to rain and we were pelted with raindrops during the course of the ride but the weather cleared up fairly quickly. We counted ourselves lucky because the forecast was for rain with occasional thunderstorms all day when in fact it turned out to be a very nice day. 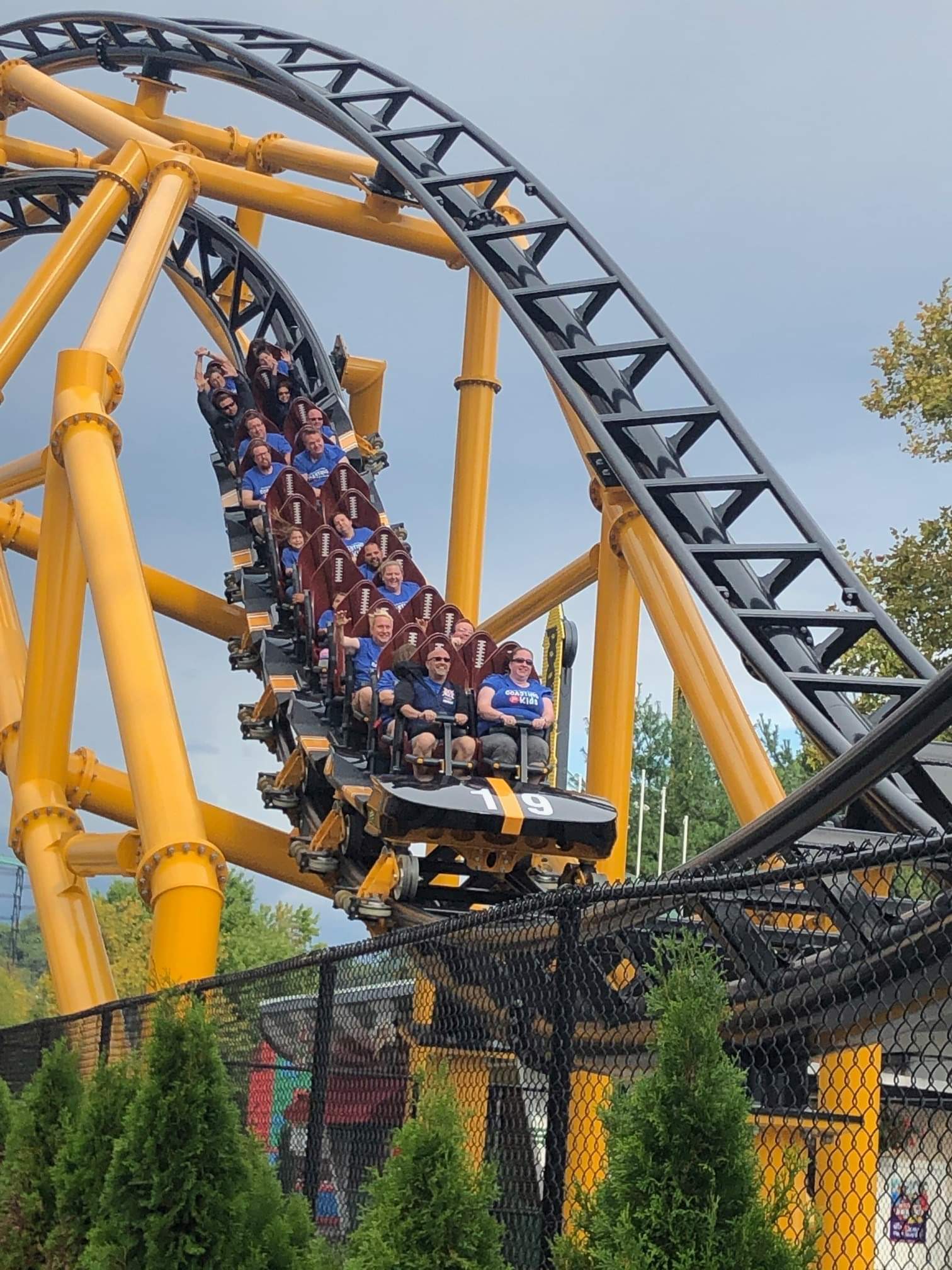 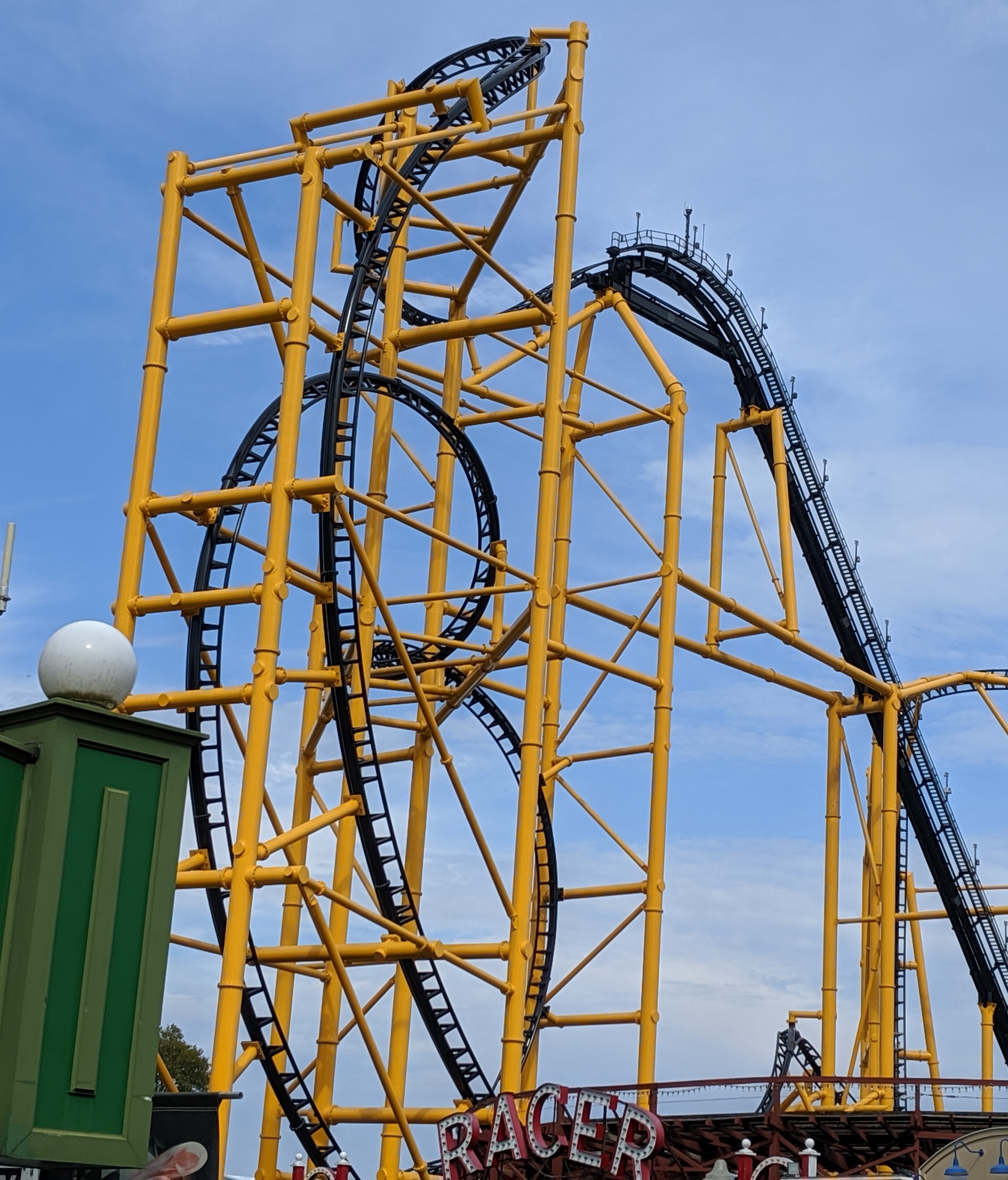 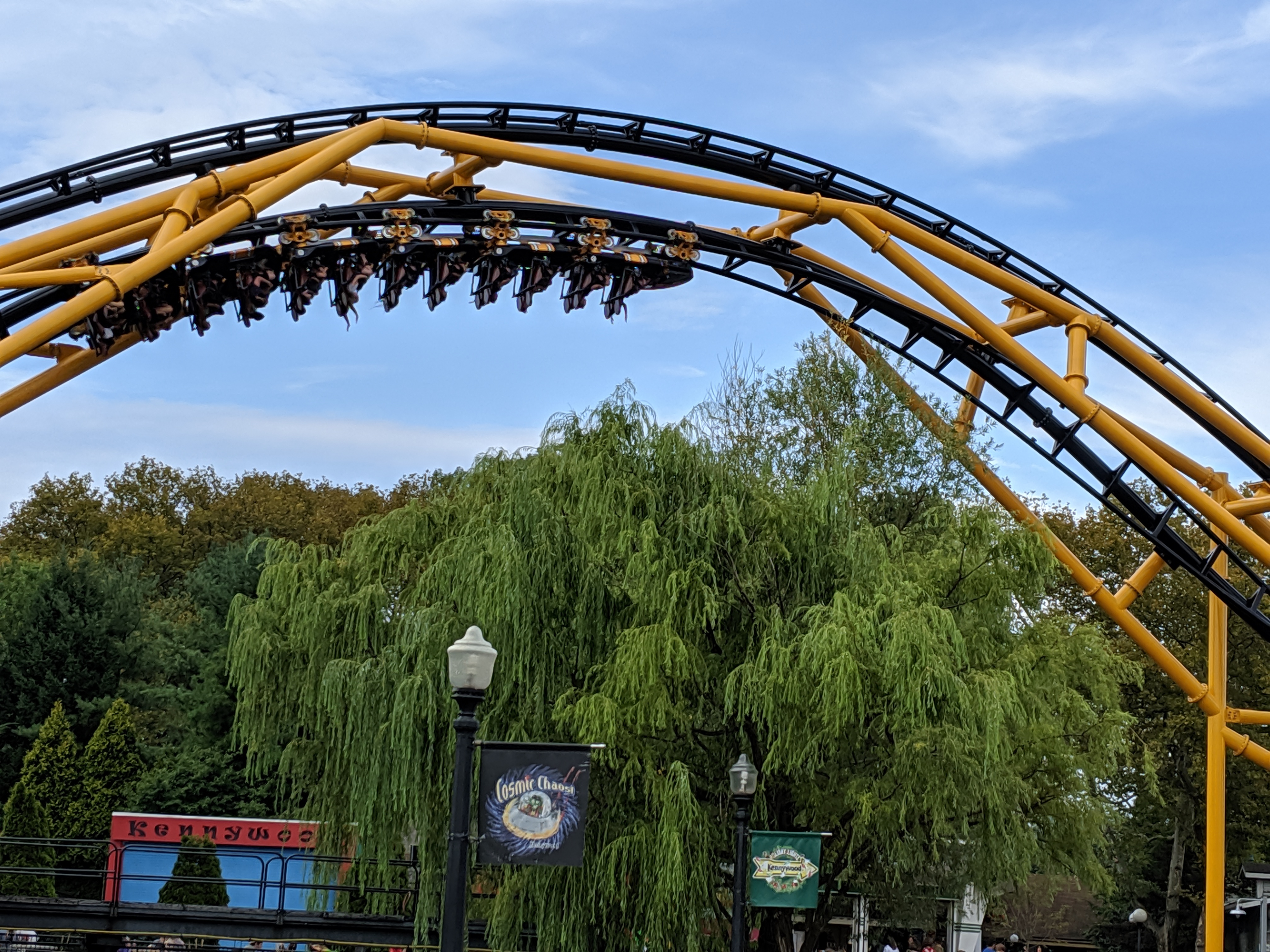 Judy and I would have been happy to ride Steel Curtain indefinitely but after 7 rides we decided that we had better grab a few rides on Jack Rabbit before the park opened to the public. My ophthalmologist had regaled me with stories about Jack Rabbit so I pretty much knew what to expect, including the drop into a ravine before the lift hill. What a fun ride! It may be small but the airtime is big. The fact that this coaster, built in 1920, was given enough TLC to keep it running smoothly after all this time is a tribute to Kennywood. After Jack Rabbit we got a ride on Racer, another fun coaster, which differs from other racing coasters I’ve ridden in that the train returns to the station on the opposite side from which it departs. From Racer we proceeded to the park’s third wooden coaster, Thunderbolt. This is a coaster which requires a partner to ride and I can see why. While the stats are not impressive, the ride is pretty intense, with several jolting left turns. It’s another one which drops before the lift hill. 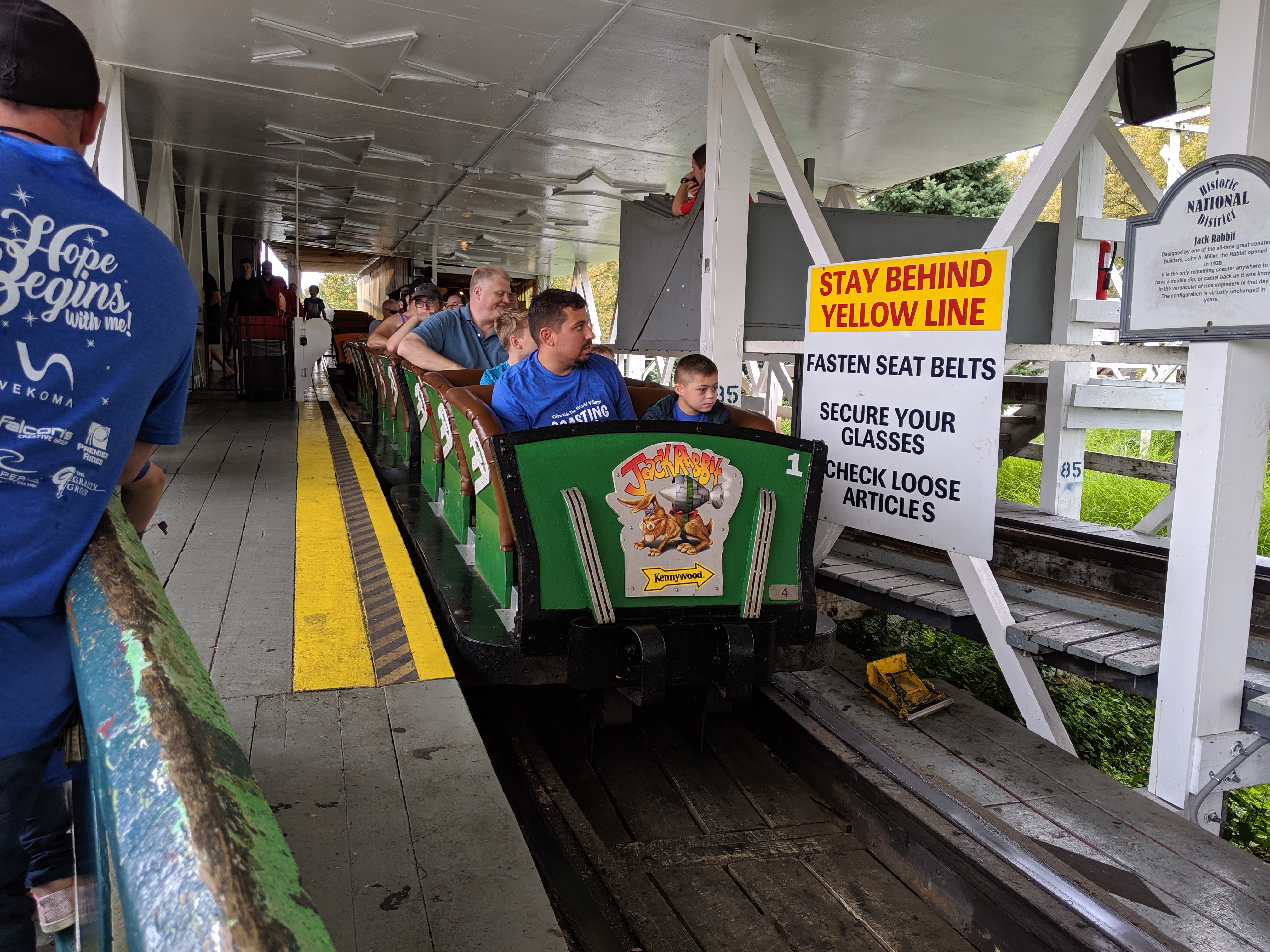 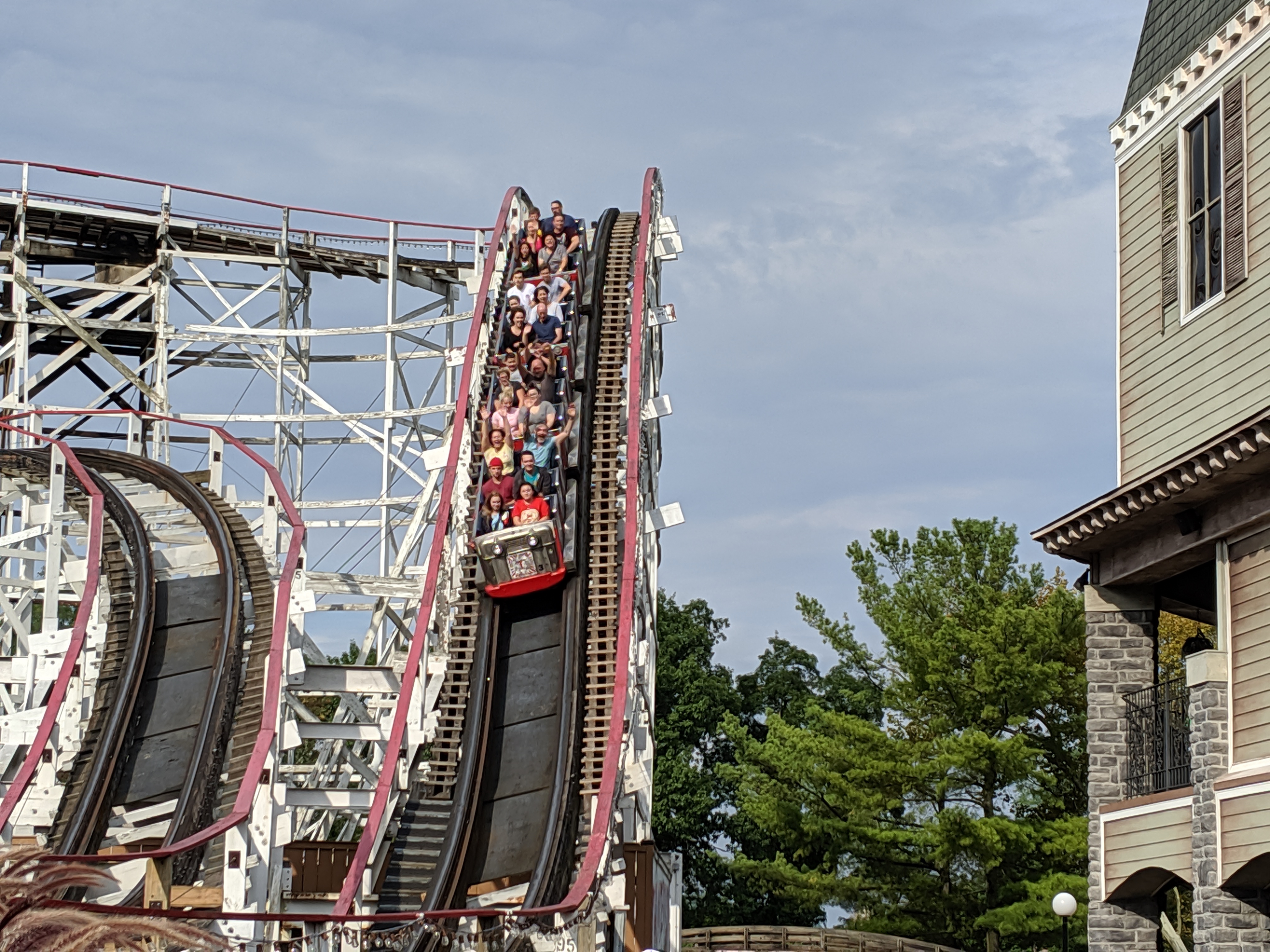 Next up was Phantom’s Revenge. This Arrow Dynamics coaster is remarkable for having a second drop which at 228 feet exceeds the length of the first drop. The fact that the train goes under Thunderbolt is pretty cool. I enjoyed the ride although I found the bunny hills near the end somewhat jarring. (Back in the days when this coaster was called Steel Phantom, it featured four inversions. These were removed due to complaints about the roughness.) We decided to go for a second ride and while we had to exit and walk back to the entrance, it was worth it. We next grabbed a ride on Exterminator, a dark spinning wild mouse which I would have counted as one of the better rides of this type were it not for the fact that my head got slammed against the back of the ride vehicle. I ended up with a lump on my head. By now we’d ridden six of the seven coasters at Kennywood so we headed to Sky Rocket, a launched coaster with several delightful inversions. This was another fun ride. 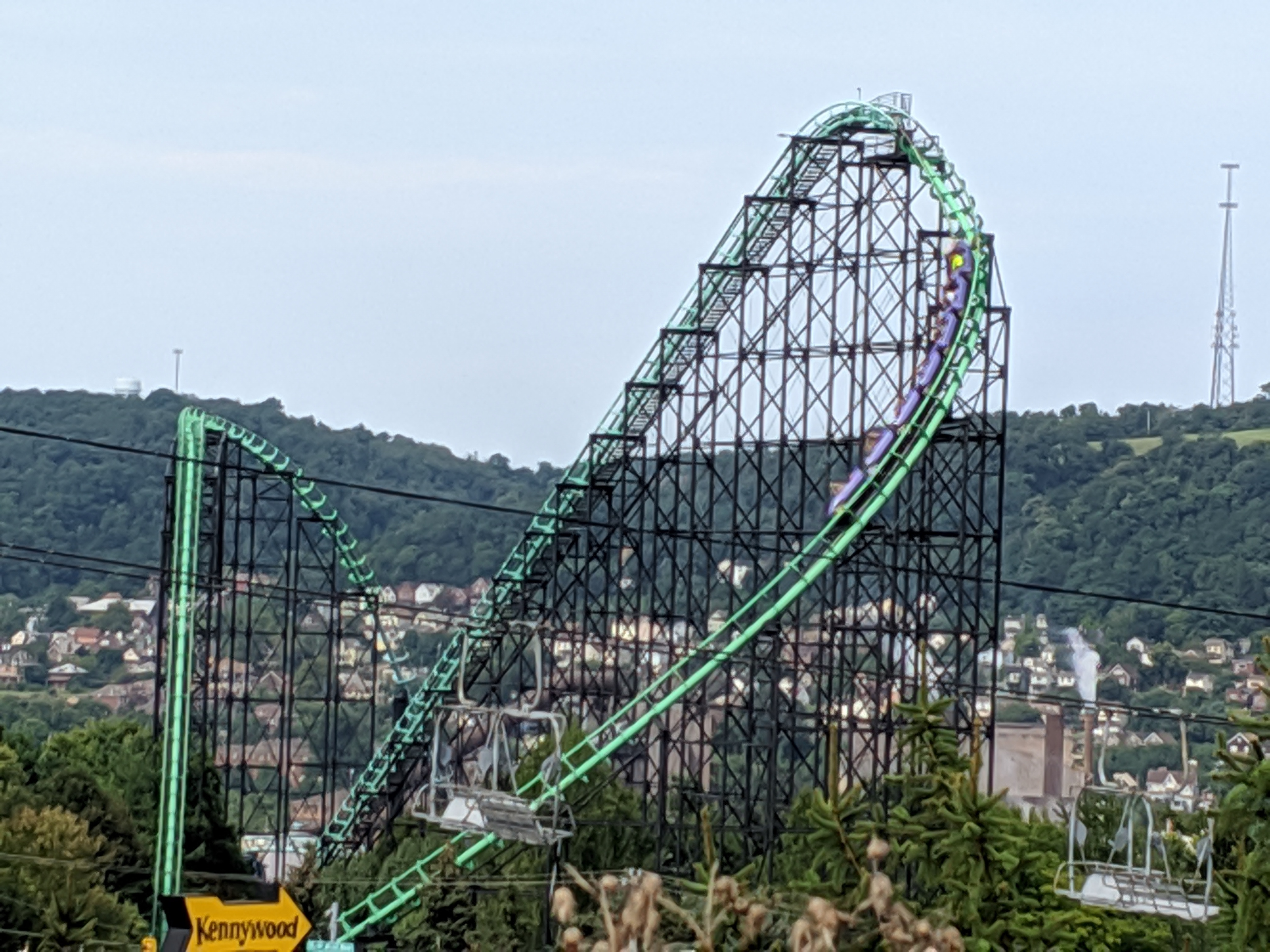 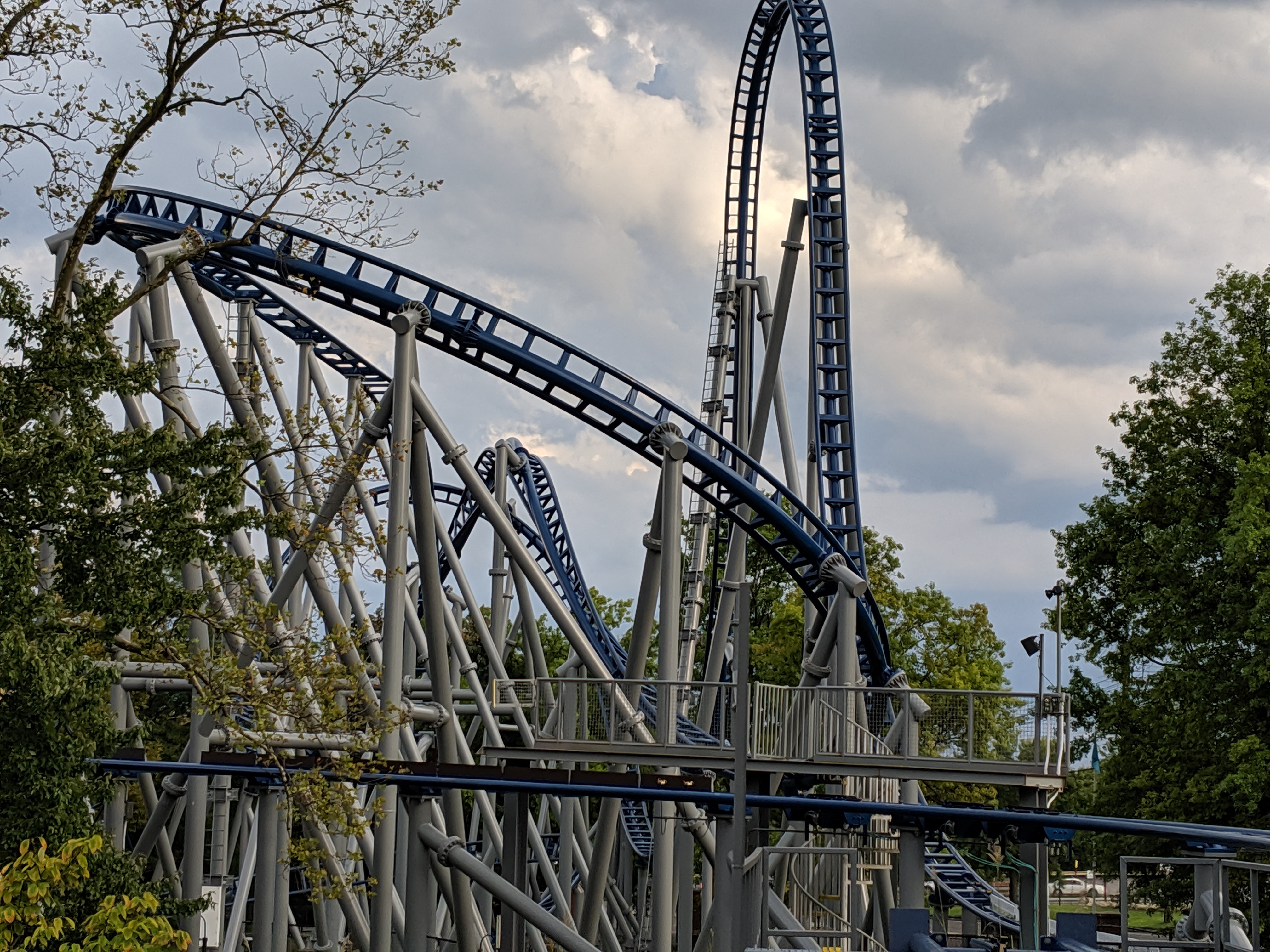 After lunch we met up with Mark, who had raised over $1,000 for GKTW, and contemplated another ride on Steel Curtain but by this time there was an hour wait so we skipped it, instead going back to Thunderbolt. Judy sat this one out. We passed by Aero 360, which as far as I could determine is nearly identical to Meteor at Dorney, a ride I hated. I said as much and although I later decided that I was willing to ride it, Judy nixed the idea, saying that she knew I didn’t like it. Well, I tried to be a good sport. The only flat ride we did all day was Bayern Kurve, which proved to be a mistake. This bobsled-type ride throws you to the left with such force that my right wrist hurt from grabbing the handrail as hard as I could in order to avoid being knocked out of the seat. One unusual thing that happened is that the ride ops stopped the ride mid cycle, saying that it would resume as soon as the people in car 13 were sitting correctly. (Not sure what they were doing wrong but it was enough to call a halt.)

With the weather holding up despite the gloomy forecast, there was now a wait for almost every attraction in the park. The shortest queue was for Sky Rocket so Mark, Judy and I headed over there. That was the end of the day for Judy and me. (Mark had a VIP wristband so was planning to stay until closing.) This was my first visit to Kennywood and a great event. It was rewarding to get quick access to Steel Curtain and to have the opportunity to make a contribution to Give Kids The World.

Note: I do not know to whom to credit the two photographs not taken by me; they were pulled from Facebook.

Glad you were able to make it to Kennywood Bobby, and that you figured out how to embed your photos. Steel Curtain is quite an achievement, and I think if it had been installed at a larger, more frequented park owned by a major chain, it may have received some more publicity outside of the coaster community.

They were just getting SkyRocket back up after a year-long hiatus when we were there for the media day, so I haven't been on it since its first season. It does sound like the presence of Steel Curtain helps SkyRocket to have more manageable lines since my biggest issue with the older coaster was that it has a smaller capacity despite having been the only one in the park with inversions prior to this season.

I really like Bayern Kurve, but can see your issues with the aging flat ride. It not only pulls a surprising amount of g's, but it has a pretty long cycle, meaning riders have to not only brace themselves, but also hold their positions for an extended period of time. This is a throwback attraction that spits in the face of modern safety standards.

I agree that those bunny hills at the end of Phantom are a bit jarring, but it achieves the affect that few other hypercoasters (particularly B&Ms) are able to replicate - ejector air. I particularly like the first one right after you come out of the tunnel on the way back up the hill.