EPCOT International Festival of the Arts

In the past, we have almost exclusively visited Walt Disney World in the fall during the EPCOT Food and Wine Festival. However, our most recent trip corresponded to another, newer EPCOT festival, the International Festival of the Arts. While the World Showcase is still dotted with the trademark booths serving food, the Festival of the Arts features not only the culinary arts, but also the visual and performing arts. Every day throughout the festival features musical performances from Broadway stars performing some of their favorite Disney tunes. While we never sat down to watch a performance, we caught a few minutes of a show while passing through the American Adventure, and while I wasn’t drawn to listen further, the Broadway performers were drawing a pretty sizable and boisterous crowd.

I was most looking forward to sampling all of the interesting and unique foods that were part of the festival, but I was rather surprised by the space around the park dedicated to the visual arts. There were a number of painters, sculptors, and other artists signing and selling their works. The subject matter were primarily limited to Disney characters and themes, but there were some very talented artists showing some interesting pieces beyond Disney themes. In addition to current artists selling their work, there are a number of visual art displays around the park. 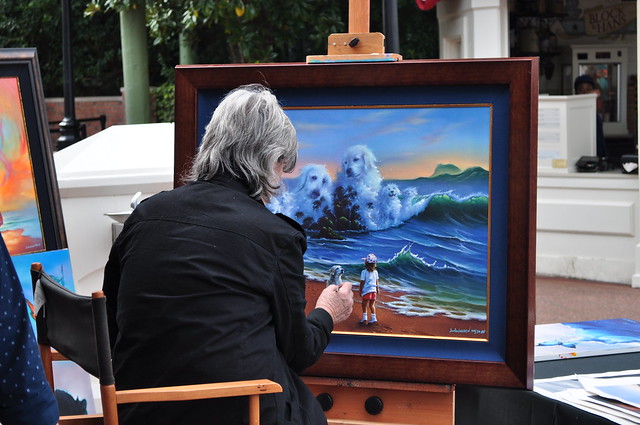 In the space between FutureWorld and the World Showcase there were a number of chalk art displays. Some were simple replicas of famous paintings and Disney characters, but the most impressive pieces were trompe l’eoil works where guests could step into the art to create impressive optical illusions. 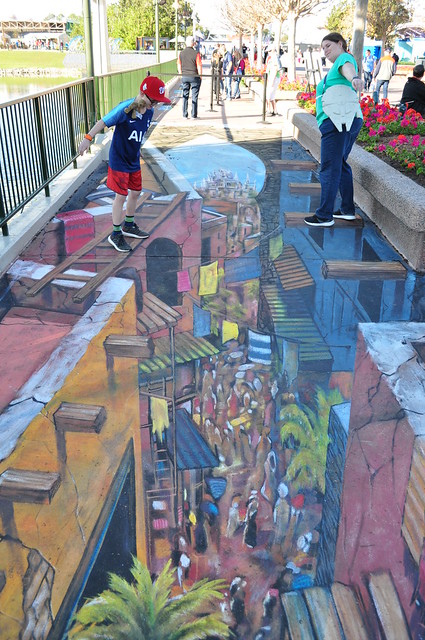 There were also some other places around the park where guests could participate in the art. Around the World Showcase, there were numerous famous paintings set up in 3-D frames where guests could step into the works as characters. From Munch’s “Scream” to Da’Vinci’s Mona Lisa, if you always wanted to be a character in a famous, painting, you could get your chance in these clever displays. 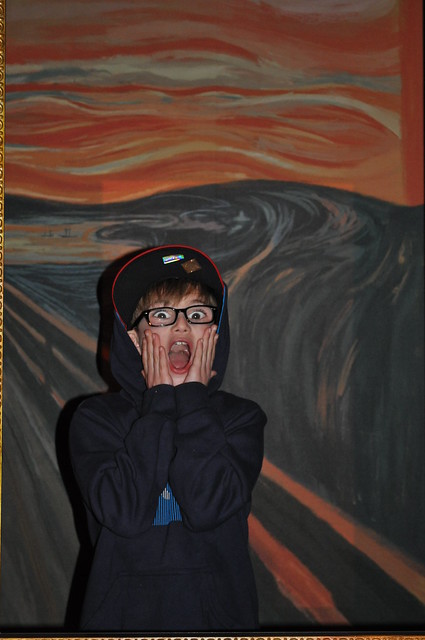 Guests can also participate in a group mural that will be completed throughout the 2020 Festival. A giant canvas is divided into thousands of individual color coded pixels, and you can lend a hand in creating the art by painting one color and square at a time. 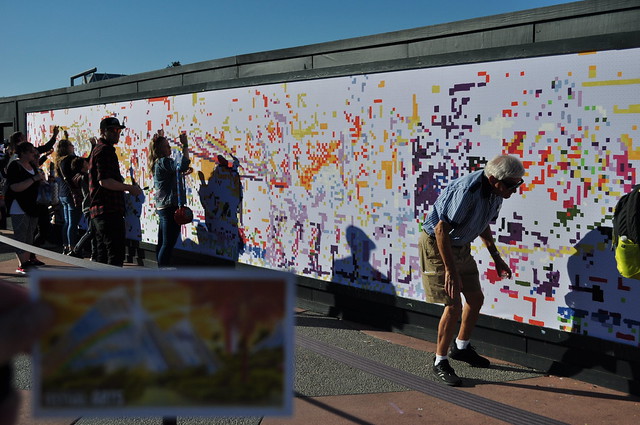 One of the first dishes we tried was from the Masterpiece Kitchen booth near the Canada Pavilion. The smoked salmon and cream gateau with egg yolk cream, paddlefish caviar, and micro herbs is a kind of savory Napoleon. Consider this a gourmet version of bagels and lox, and the slightly sweet cream and salty caviar balance the smoked salmon perfectly. 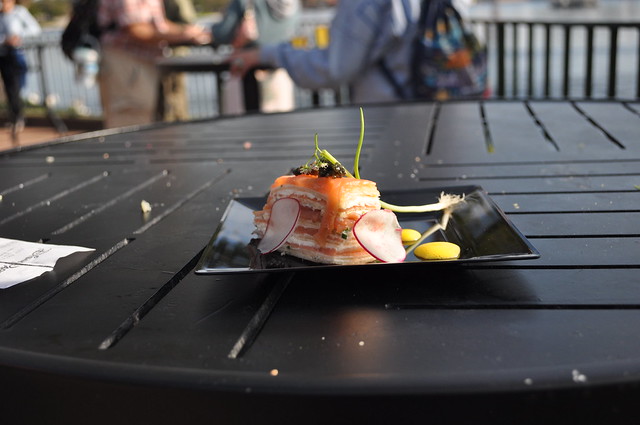 Another dish from the same Masterpiece Kitchen booth was an example of a Festival dish that was almost too pretty to eat. The vanilla, rose water, and pistachio panna cotta is presented in the form of a budding pink rose. A white chocolate shell helps to maintain the shape while not affecting the subtle flavor profile inside. I expected this dish to be overly sweet, but it was just right, allowing the soft rose water notes to sing through the fluffy panna cotta. The pistachio dust adds mostly color and texture to an otherwise perfectly composed dessert. 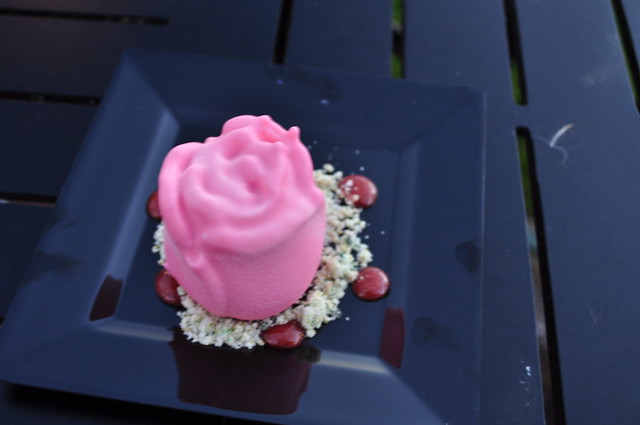 At the nearby Refreshment port adjacent to the Starbucks, the regular menu is supplemented with one of the best tasting Festival items we sampled during our time in EPCOT. The lobster chips are on the more expensive side at $8.99, but with nearly a full lobster tail layered with lobster bisque cheese sauce, pickled jalapenos, and citrus scream on super crispy kettle chips was worth the premium price. 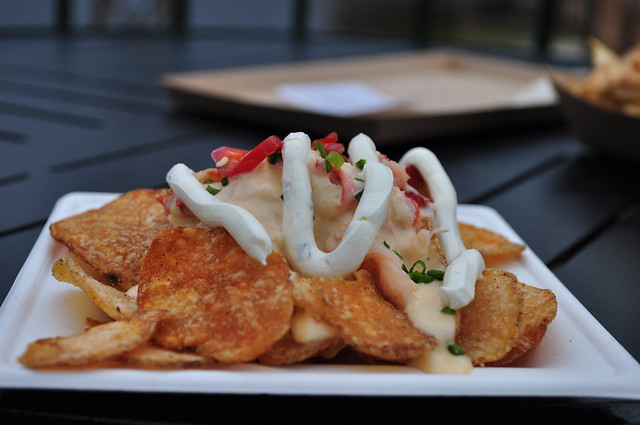 While the lobster chips were one of the best dishes we tried, there were a couple offerings that didn’t quite measure up. The shrimp ceviche with lime mint foam from the Pop Eats! Booth was not as good as other seafood ceviche I’ve had, including an amazing version we had during the 2017 EPCOT Food and Wine Festival. The foam added very little to the overall dish, and the citrus notes were overpowering. Also, the shrimp were a bit on the chewy side indicating that they had been sitting in the marinade too long. 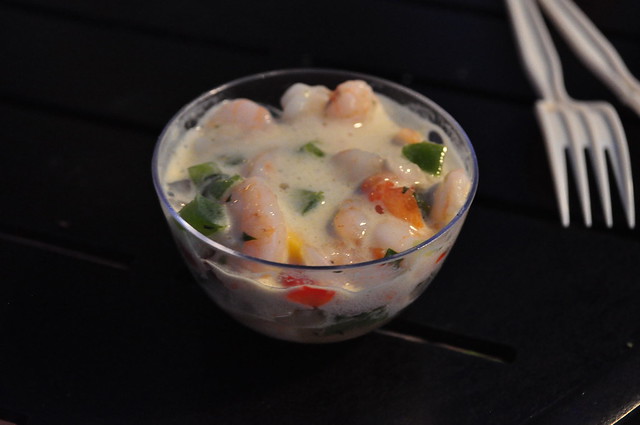 While the ceviche dish from the Pop Eats! Booth was a miss for us, the almond frangipane cake was a visual and taste sensation. The cake was a bit dense texturally, but the raspberry jam layered between the rectangles of brightly colored cake was delectable. 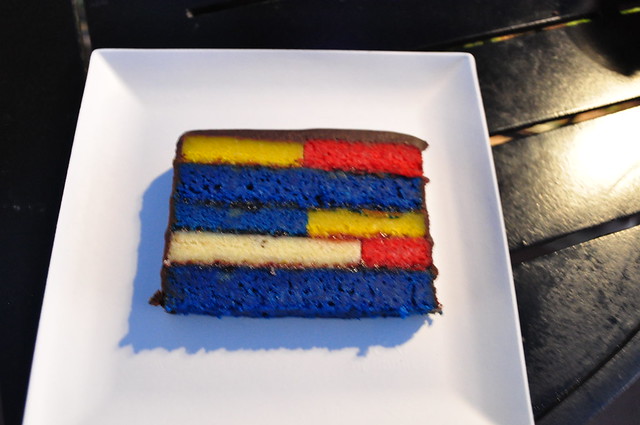 The Deconstructed Dish booth offers a number of classic dishes separated into its component parts. We tried the deconstructed BLT, which featured crispy pork belly, tomato jam, and a soft poached egg. I don’t think I’ve ever had a BLT with an egg on it, and in this version the egg didn’t really add much and was overcooked with a rubbery yolk. Soft poached eggs are hard enough to prepare under perfect conditions, but doing so in a tiny booth with portable cooking equipment was a difficult ask, and probably should have been omitted from the recipe here. 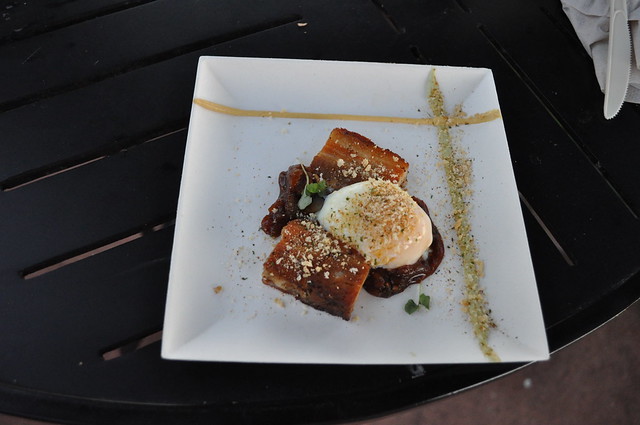 However, the 2 dishes we tried from the Cuisine Classique booth were impressive. The seared corvina with braised ratatouille and lemon-thyme beurre blanc features a well-balanced sauce that held up well to the perfectly seared meaty fish. 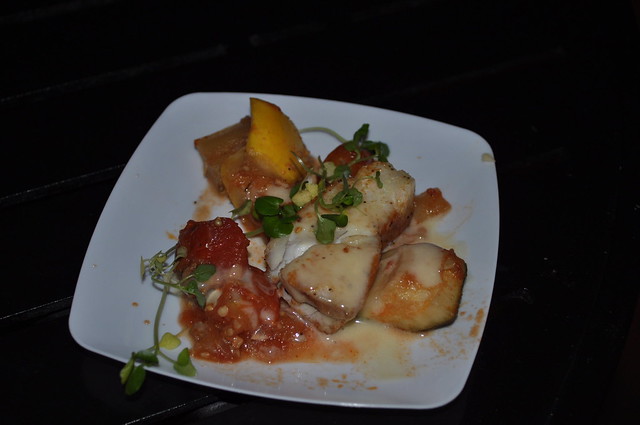 Similarly, the red-wine braised beef short rib with parsnip puree, broccolini, baby tomatoes, and aged balsamic is right out of a French restaurant. The ample portion of short rib is fork tender with an earthy sauce that you’ll want to savor every last drop. 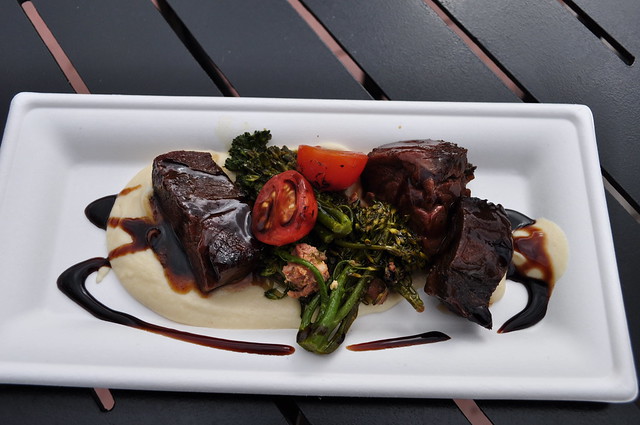 Two of the last dishes we tried further exemplified the creative artistry of items at this Festival compared to the EPCOT Food and Wine Festival. The pan-seared scallop with chorizo, roasted red pepper coulis, and a parmesan crisp could probably feature on a Food and Wine Festival menu, but there’s an extra level of artistry from the plating of this dish that is more appropriate for the Festival of the Arts. My son devoured this dish rather quickly, so I only got to taste a half bite of the scallop, but it was well seared and seasoned. 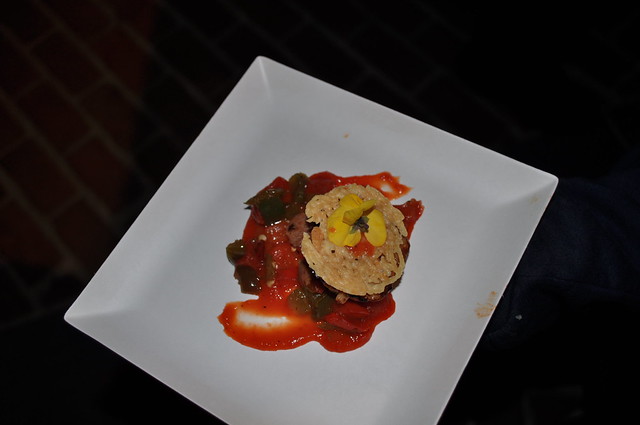 The sushi donut is straight from a food photo shoot with slices of nagiri sashimi layered over sticky rice in the shape of the donut with 3 accompanying sauces (wasabi, eel, and siracha). There’s nothing out of the ordinary about the tastes here, but the presentation is incredibly well done and communicates the themes of the Festival of the Arts. 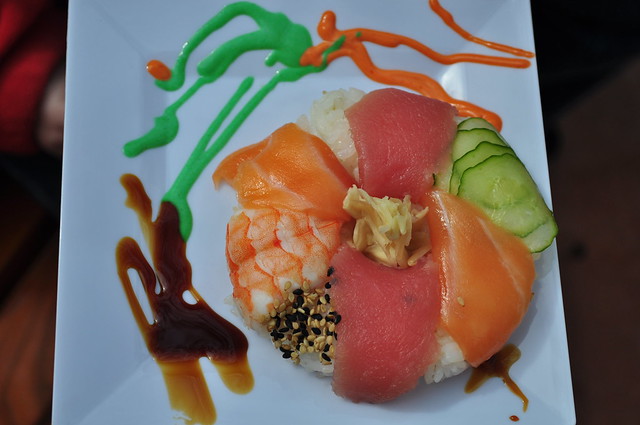 While gourmands are probably better served by the shear quantity and variety of dishes offered by the EPCOT Food and Wine Festival, the EPCOT Festival of the Arts offers some dishes that are clearly a step above with their plating concepts. The additional attention paid to the visual and performing arts set this winter festival apart from its fall counterpart, and the extra attention paid to the visual appeal of the culinary offerings differentiate it from the older, more established fall festival. I expected this to be just a mini-version of the EPCOT Food and Wine Festival, but was pleasantly surprised to see the EPCOT International Festival of the Arts distinguish itself as a somewhat different and enjoyable event. 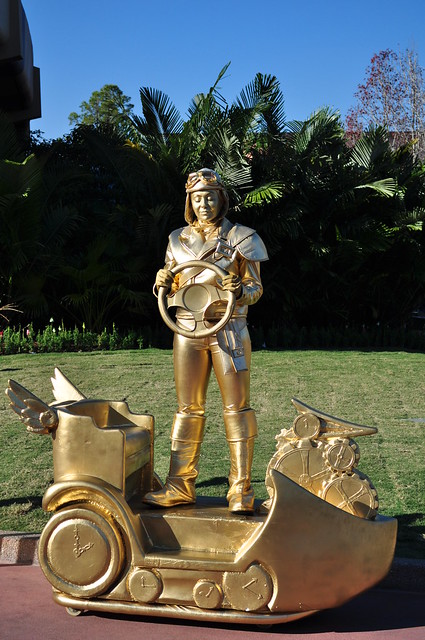 I was at the festival this weekend. My two favorites were the chicken from the both by Italy. Possibly the best fried chicken I ever had. Light breading, not greasy and very juicy. Also loved the deconstructed Reuben.

To be honest, we chose the BLT over the Reuben because it was part of the Festival Passport, but the dish didn't sound overly inventive or a far departure from the established recipe.

We considered the pollo ala parandello (stuffed chicken leg), but reviews of the dish were not great, and the versions I saw people getting from the stand as we walked by didn't look particularly good, certainly not $10 good for a single drumstick.

As with all theme park food festivals, there is always a high variability in quality from day to day and we all have our specific tastes. I think the mark of a good Festival is one where you taste far more dishes than you LOVE than you wish you could send back.

Hey Russell this was a great review. Awesome pics and a good read. Nice work man!