June 1, 2007, 1:22 PM · With all the hype going around Harry Potter, it seems that the fact that Universal has a brand new show was overlooked.

It seems like only yesterday that Universal Orlando announced that Nickelodeon Studios would be closing forever. I remember when we would all speculate on what would take its place. The rumors ran rampant from the Simpsons, to office space to even a new hotel. Funny how things play out. The Simpsons will be taking up residence at the former home of Back To The Future, and there are plans for two new hotels, or so it seems.

I have to be honest that I had mixed emotions when Universal announced that the Blue Man Group would be taking over the old building, and even more, it wouldn't be part of Universal Studios but part of CityWalk. How was this going to benefit a park that had pretty much single handedly turned me from a casual theme park goer, to an all out junkie? 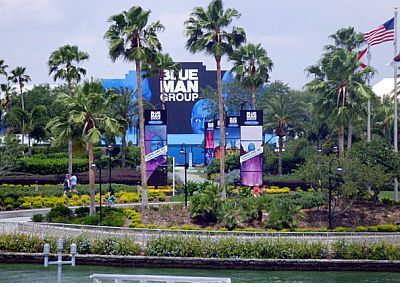 That question was answered as the old splats of green slime paint were covered up by new purple and blue splats of paint, with the faces of three odd blue faced men staring out over City Walk.

What was once a secret place where you could enter the park from behind the Hard Rock Cafe is now a wide open pathway with signs, flowers and benches. Its really surprising to see how far an empty plot of land has come in just six months. The side entrance is still there, but now its a lot more visible, as its right in between the Sharp Aquos Theater and Jimmy Neutron. As you make your way in from the Studios, you can see huge Blue Man Statues. At the right angle they are silhouettes against the Nickelodeon sign on the Jimmy Neutron building, almost kind of paying tribute to the former occupants of their new home.

As I walked up you could see crews still hard at work on a few finishing touches, though the box office is fully operational. The only thing that remained of the old Nick building is a single orange handrail on the second floor. Entering the building, it really seems smaller than it is. A concession stand and gift stand flank on the left across from the theater entrance. The new scenery and tile in the lobby really gave the place a touch of elegance and made you forget that just about a year ago it was covered in slime and gak. Upon entering the theater, it kind of overwhelmed me as it was a lot bigger than it seems on the outside. The theater wasn't completely finished, but it still gave you an idea of what to expect.

After setting up the cameras, and figuring the best place to sit, it was time for the show. We were informed that it wasn't going to be the full show, but a set of three songs. The lights went down, and all you could see was the glowing blue of the faces as the three figures ventured out onstage. The ferocity that they played the drums, even when faced with splattering paint everywhere was breathtaking. The thing that surprised me was how intrigued I was at what the guys were doing with their emotionless faces. They seemed to have a curiosity about everything, communicating with their eyes and head movements. It reminded me of watching children discovering something for the first time and figuring out that even though it might have had one intention, it's just as easily a new toy.

What we got to see was just a preview of the whole show, and I felt heartbroken that it was over. I wanted so much more, not that what was played wasn't good....it was just so good that I wanted more.

Looking around afterwards you can see several bizarre props that were not used. You couldn't help but to wonder what they're going to be used for....especially the huge white flex pipes tucked neatly in the rafters above.

I was really impressed, and I think that Blue Man Group is a fitting replacement for the Nickelodeon Studio.

Another short vid:
http://www.youtube.com/watch?v=q276vdamD8g
Sorry about the audio quality

I know I could just go search and find out, but is there a seperate price for this show and if so, is it reasonable?

Yes it is a seperate ticketed event. And the prices arent bad. They start at just $50 something dollars, and really the first video that was posted from the "bad" seats in the back. There isnt a bad seat in the whole place. The only advantage to sitting closer is to get some paint splatted on you.
Its much cheaper than Cirque Du Soleil. In this weeks episode of IOACentral Radio we talk about pricing, and we also talk to the Blue Men themselves.

You can also check out our BMG update:
http://ioacentral.com/bluemangroup/

I saw the full show at a preview! It's definately worth the extra price. There's so much humor, energy and terrific music. The UO show is a blend of some of their other shows, with some stuff that was created for Universal added in. I'd certainly recommend it.

I really need to get out to Orlando and see this. Why must I live in California? (But I have seen the Vegas show 9 times, so I guess CA has its advantages.)

That show looks like so much fun! Love the video. It would be awesome to get a blue man group show in USH, that could replace maybe animal actors or maybe even Fear Factor. It would be a great addition to a park that has so much potential, but clogs a lot of its space with mediocre shows. Hope to go to Orlando soon, and see BMG in show!

I am pretty sure its there to combat with Cirque du Soleil at Downtown Disney. Not thats its a probalem or anything, but they are more or less the same price admission (Cirque might be a little more). Hey, bringing Blue Man Group to Orlando is always a plus!

Anthony:
According to Disney's website tickets start at 63 bucks, all the way up to 120.
BMG tickets are 59-69 bucks, and there is not a bad seat in the house.

Well then, they upped the price :(

A majority of the seats in the Cirque show are good!

Anyway, Blue Man's group's main purpose is to give a "show" to Citywalk I mean look at the similarities

Thus Blueman Group is a great addition to Citywalk!

The greatest theme park press release of all time

The Wizarding World Of Harry Potter comes to Universal Orlando