Cedar Point serves up another great round of brews and BBQ

June 19, 2018, 1:30 AM · I’m starting this off with a strange confession - I’m not really sure what Cedar Point’s food festival is called. It’s advertised as “Brew and BBQ” on the signage, the website and the event tickets, but on the front cover of the 2018 Event guide is announcement:

“INTRODUCING Hops & Hootenanny! Brew and BBQ is back with a vengeance this year in FrontierTown!” 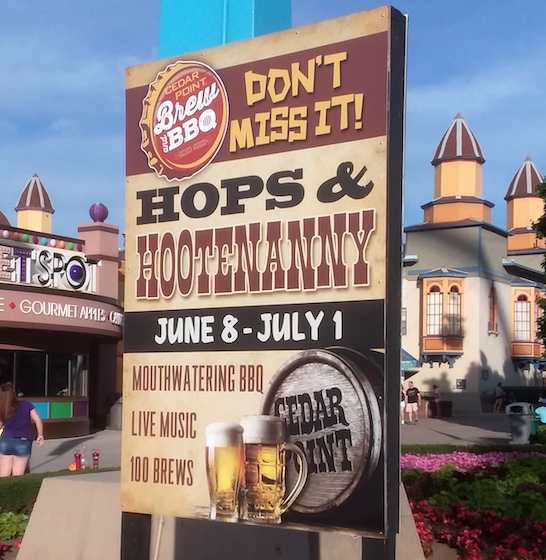 I’m not sure if this is the name of this year’s Brew and BBQ or what, but it really isn’t important. What is important is that Cedar Point has been making a major effort in improving its reputation in the park food world. I don’t care what they call it, as long as they continue doing it - and that they don’t call me late for dinner! 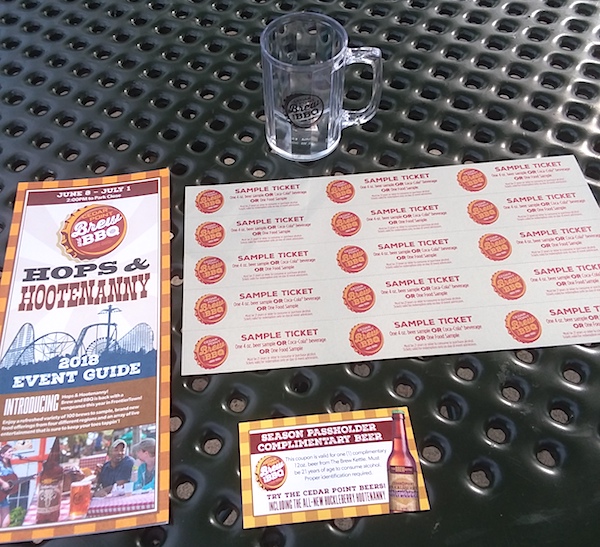 Tickets can be purchased online or at the event ticket booths for $25 ($22 for season passholders), and there are other ticket/admission packages available. The admission package gives you 15 sample tickets, the event guide, a 4-oz. souvenir mug (made of the finest plastic), and if you’re a season pass holder, you also get a ticket for a 12-oz. glass of one Cedar Point’s signature beers (brewed by The Brew Kettle of Strongsville, Ohio). I tried this year’s new brew, Huckleberry Hootenanny, and while there was a definite berry taste to it, I didn’t find it overly sweet. It joins other Cedar Point brews with such names as Slaughter House Red, Frontier Trail Ale, and Shandy Shores. 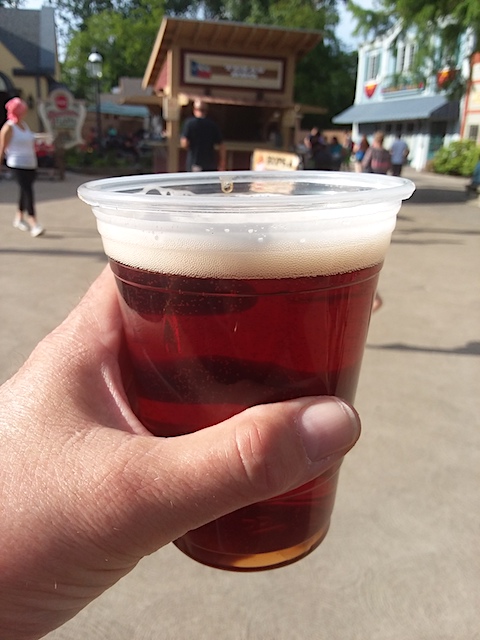 FrontierTown (actually just the original portion of FrontierTown, from the train station to the arcade) is taken over by 11 food booths and beverage tents and dozens of large picnic tables and massive Adirondack-style wooden benches and rocking chairs. There are five food booths — four that feature different styles of BBQ (Kansas City, Carolina, Texas and Memphis) and a fifth that served desserts (Miss Keat’s Sweets). I assumed that Cedar Point brought in different grill masters for each booth and was very impressed to learn that all the food came from Cedar Point’s own executive chefs! Everything tasted freshly-made, nothing canned, no trace of institutional cooking. For one ticket per sample you could easily taste something from every booth and every BBQ style, and if pressed what my favorite sample was, all I can say was that it was what I was eating at that moment. At Taste of Carolina I had a pulled pork slider, spicy shrimp and Carolina spoonbread, and Southern Slaw. The pork was overflowing off the bun, the spicy shrimp was a sweet spice that really brought out the shrimp flavor, and the spoonbread had whole-kernel corn in it. The slaw was sweet, creamy and the perfect foil to the spicy shrimp. 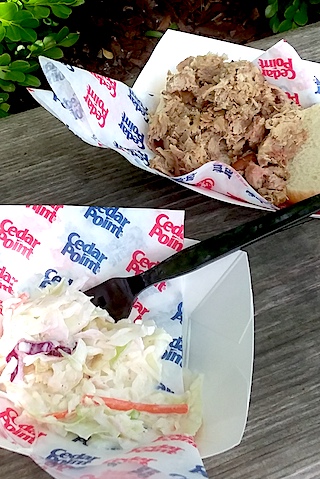 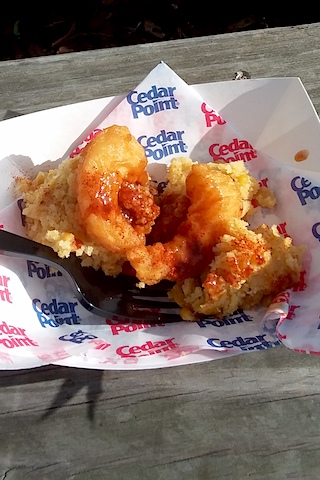 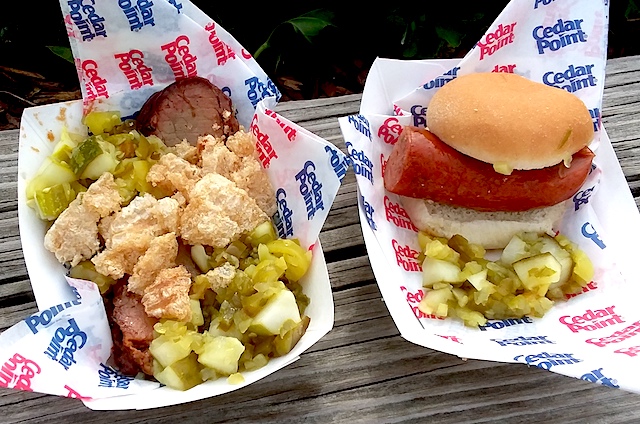 Kansas City had ribs, both wet and dry, and the meat was melt-in-your-mouth tender, and also offered loaded mac & cheese with pulled pork and bacon. What’s not to love! You only got one rib per ticket, but the large helping of mac & cheese made up for it. 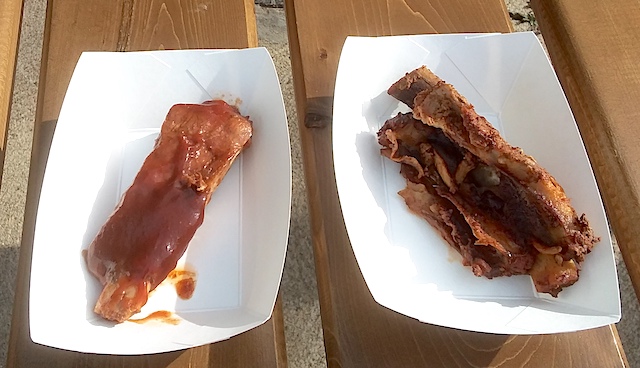 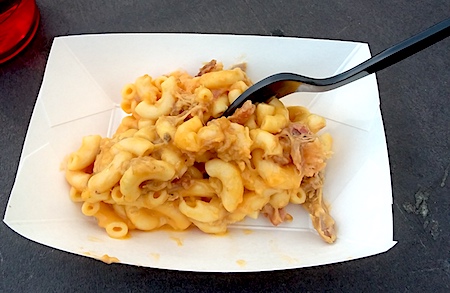 I admit that I skipped the Taste of Texas. They had “Big Horn Kickin’ Nachos with Jicama and Jalapeno Salsa,” and “Three Meat BBQ Beans with Roasted Poblano Peppers.” I don’t do peppers and am not into painful food, but the lines at the booth showed that the food there was as good as it was at every other booth... if you’re into painful food.

Dessert was found at Miss Keat’s Sweets - not that I wanted dessert, but I decide to take one for the TPI team. I passed up the strawberry shortcake (with fresh berries and whipped cream) and tried the Peaches and Cream with pralines and sweet cream. The peaches were freshly-sliced and the pralines gave a nice crunch to the sweet whipped cream and firm peaches.

Now that I’ve taken care of the foodies on Theme Park Insider, it’s time to turn to the drinkers. Each ticket could get guests a 4-oz. sample of one of over a hundred beers, wines and ciders, and also a 12-oz. Coca-Cola fountain product. As I didn’t have a designated driver with me, I only had two 4-oz. samples other than the Huckleberry Hootenanny. Summer Shandy by Jacob Leinenkugel Brewing Company was the best shandy I’ve had outside of Britain. They blended the lemonade flavor into the beer for a perfect match, and the Peach Country Cider by the Cider Boys was - well - VERY peach but also very refreshing. These were just a few of the dozens of breweries represented at the Brew and BBQ, from such well-known names as Anheuser-Busch, with its Bud Light Orange and Shock Top Lemon Shandy, to Jackie O’s Mystic Mama IPA and B Nektar’s Tuco Style Freakout Mead. It was almost overwhelming trying to decide what to try next. 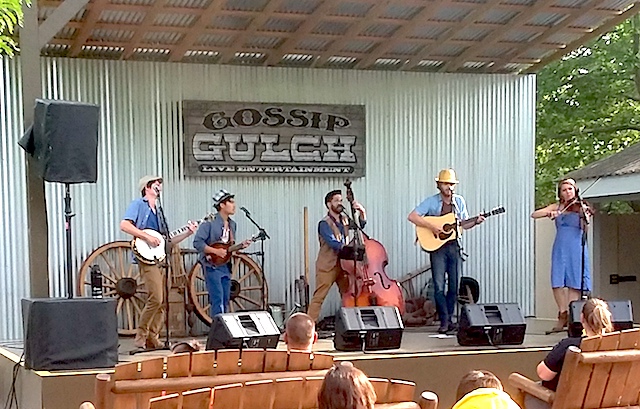 There is more to the Brew and BBQ than just eating and drinking, and perhaps this is where the Hootenanny comes in. You don’t need a ticket to enter the area - in fact, you can’t get to Maverick or Steel Vengeance without entering it, and the Cedar Point and Lake Erie Railroad Station stands at one end of the site. Lots of visitors who weren’t eating or drinking were enjoying the entertainment being presented in the Palace Theatre, the Gossip Gulch Stage, and throughout the site. Lusty Lil’s French Revue and the TomFooleries presented fun, light-hearted country music with some audience participation thrown in, and there even was a cornhole game set up - and a line of guests waiting to play it. 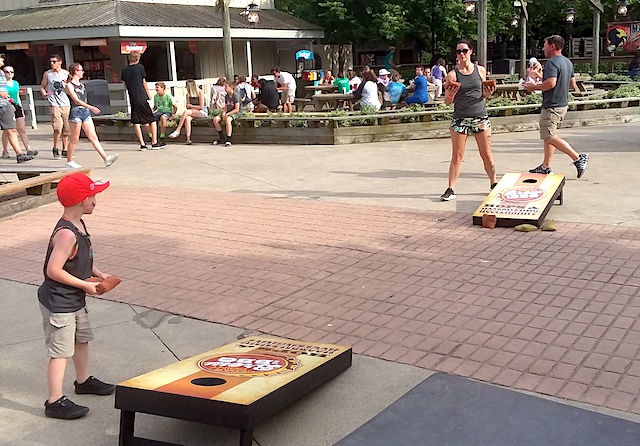 This was my first visit to Brew and BBQ, and it was so much better than I had expected it to be. The food was outstanding, the choices of beverages was nearly endless, and the whole atmosphere was fun and exciting. If you think this was an adults-only event, you’d be wrong. Probably half the people there were families with small children, and the kids were wolfing down the mac & cheese, the nachos (braver than I!) and just about everything else on the menu. Cedar Point had provided plenty of seating, plenty of trash cans and most importantly, plenty of good food and drink. 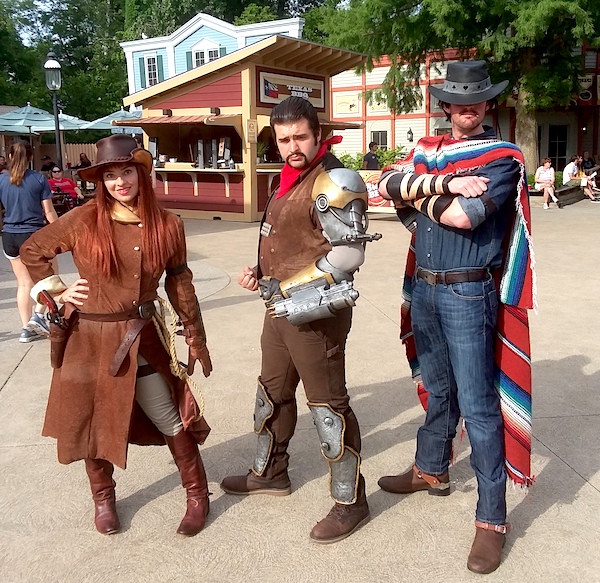 Brew and BBQ runs from June 8th to July 1st this year, from 2 pm to park close (last call is 45 minutes before close). You can use your tickets anytime, and with everything I had to eat and drink I still had four tickets left over to give away to a family with some kids who wanted dessert (and a dad who wanted one more rib!).

If you’ll be at Cedar Point before July 1st, don’t miss Brew and BBQ. This is an annual event and is a terrific addition to the Cedar Point calendar. Don’t miss it!

Sounds and looks great - thanks for making me massively hungry well before lunch!!!

The still have the sandwiches you love so much at Lakeside Express ;+)

Nice review! It's good to know how excellent the food was that went with the drinks. I sometimes worry the food is banking on the samples to make everything taste better. I think it's exciting to see parks doing good things with food.

Thanks for the report James!

We did this back in 2016, and it was a solid event. I have no doubt that with 2 more years of seasoning (and another world class roller coaster nearby) that Cedar Point has continued to improve. I really liked the selection of beer, though a number of important nearby microbreweries were missing (Great Lakes and Platform most notably). I know it's important for festivals like this to have plentiful selections that guests are familiar with, but I would trade every InBev/AB and Miller/Coors (of which the aforementioned Leinenkugel's is a part) product for a local brew, even if it is owned and/or distributed by one of the majors. I definitely enjoyed the Valravn brew that the Brew Kettle developed for Cedar Point (Black IPA). Kings Dominion has a similar collaboration with a nearby brewery (Center of the Universe) that makes custom beer for the park.

My impression 2 years ago was that the food was a bit of an afterthought with most of the dishes just spins and variations of what could be made with ingredients found in existing menu items, so it's good to see the park expanding in that area. I felt that the 15-ticket sampler was a good value for a theme park meal, and that you could easily split dishes with 2-4 people and still have a satisfying light meal with 4 or 5 beers.

Which of Disneyland's flavored churros is the best?

Just how complicated can theme park tickets get?