The Steel Curtain debuts at Kennywood

July 11, 2019, 6:04 PM · The coaster wars have heated back up as Kennywood has staked its claim against some of the biggest players in the industry. The Steel Curtain at the West Mifflin, PA park on the outskirts of Pittsburgh establishes 3 records including the tallest coaster in Pennsylvania at 220 feet, the most inversions in North America with 9, and the highest inversion in the world at 197 feet above the ground. In addition to being a world record breaking coaster, The Steel Curtain represents the first partnership between the NFL and a theme park with the coaster and the surrounding land themed after the Pittsburgh Steelers, one of the most popular franchises in the NFL. The coaster features a web of black track and bright yellow supports that are very appropriate for the Steel City. The trains are patterned after the team’s jerseys complete with football-themed seats, as if riders are being carried into a NFL game. 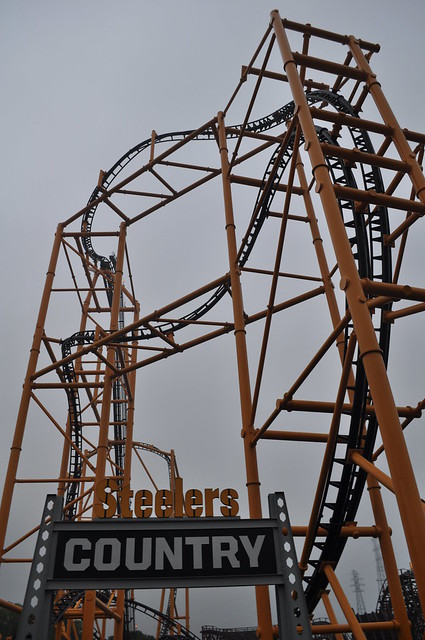 The coaster was designed by S&S Sansei Technologies, who debuted Maxx Force last week at Six Flags Great America, and is a departure from their pneumatic launched coasters and recent free-fly (4-D) coasters. The trains feature seat belts and lap bars, not over the shoulder restraints, which are comfortable, yet provide plenty of upper body freedom, a huge plus on a coaster where you’re flung upside down 9 times. The chain lift slowly pulls the train up to the top of the 220-foot hill at a very steep angle. Once at the top, riders get a couple of seconds to admire the view before going right into the first diving inversion. 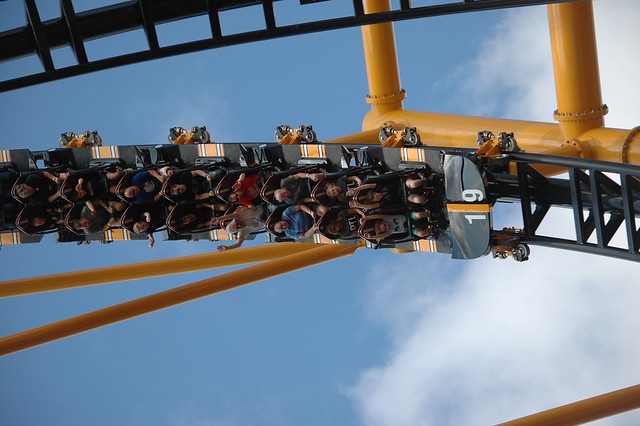 As the coaster accelerates to its 76 MPH top speed, the coaster then shoots upwards into a double inversion around the lift hill, similar to a cobra roll. 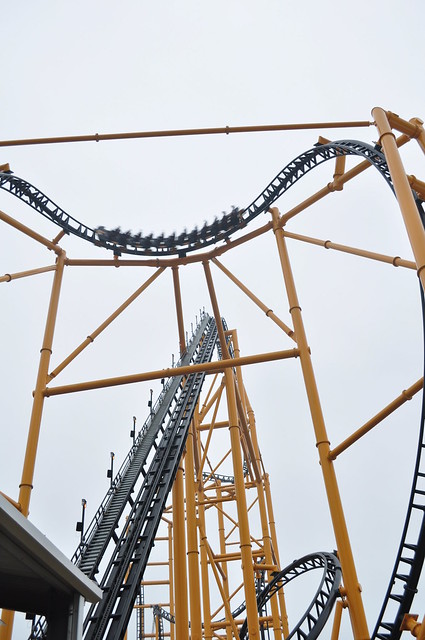 Then comes a high-speed, low-slung airtime hill before entering another double inversion, similar to a “sea serpent” like the one found on Medusa at Six Flags Discovery Kingdom. 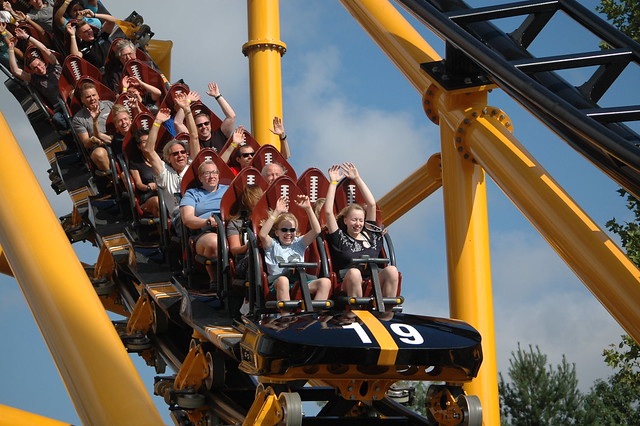 After the second double-inversion, the train goes through what I think are the real highlights of the coaster. The trains speed towards the park’s central lagoon for a rather innocuous, but amazing airtime hill achieving at least 2-3 second of pure out-of-our seat euphoria. After being ejected out of your seat, the train then executes a dive loop to take the train back towards the station, but there are still 3 inversions left. The next inversion is a flip-over that sends riders over a walking path and then quickly into a corkscrew. The train then goes through a tight helix and that final inversion that flips the train halfway over before going right-side up, into a quick bunny hill just before the brake run. 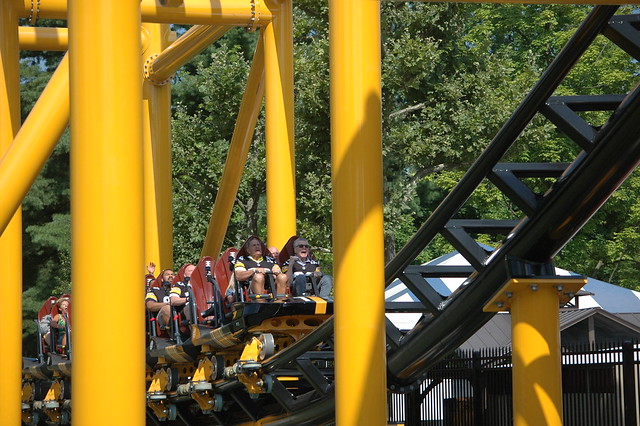 I was initially a bit skeptical whether Steel Curtain would live up to its record-breaking status as well as a coaster manufacturer that has been known more for smaller coasters. Also, having written most recently about new roller coasters that have been smaller but with wider appeal and not needing to break records to build a great ride, I was not prepared for what Steel Curtain brings to the table. For as great as smaller coasters can be, there’s something to be said for being the tallest, fastest, or “most-est”, and Steel Curtain proves it. The overall ride is incredible with smooth transitions between inversions and great pacing throughout. There’s not a single bad spot on this ride, and the intensity is unrelenting throughout without being nauseating, even in the back row where riders experience the highest positive g’s. The record-breaking 9 inversions fly by without being repetitive or uncomfortable, mostly thanks to the lack of OTSRs. While I’ve never been on The Smiler with its world record 14 inversions, the common comments about that coaster is that it the inversions are really repetitive and disorienting. The Steel Curtain doesn’t have any of that, and pairs the high volume of inversions with great shots of airtime, high-g’s, and an overall fun experience. 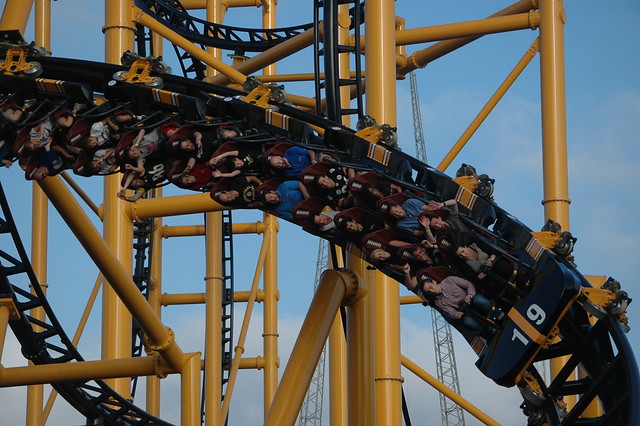 This is not the kind of coaster that guests should be afraid of like Smiler or Intimidator 305 that are known for their over-the-top experiences. While my 9-year old son, Zachary, is a thrill seeker, he described the coaster as “crazy”, but didn’t want to stop riding it during today’s media event. The coaster is easily re-rideable, and will easily thrill guests over and over. So, while I’ll still give it up for the small rides that find ways to do more with less, The Steel Curtain is a record breaking coaster built the right way with more than just record breaking numbers in mind.

Great review Russell ..... although having ridden The Smiler many times, I did not find it repetitive despite the 14 inversions. The theming takes care of that, and the Steel Curtain looks to wow us with great theming as well.

I'm on the fence about detouring to Kennywood for next years coaster adventure, but as I've never been to the park, what's a few more 100 miles to try out the coaster selection at Pittsburgh's finest ... :)

Reads like a great ride, but what a terrible name and what an ugly structure.

Wow, that looks like an incredible ride! I wish my gut's age still allowed me to go ride inversion-heavy coasters. I rode a simple Corkscrew-type ride a few weeks back, and I could barely stand up afterward, with hints of nausea and disorientation. I'm afraid my days of epic coaster road trips are behind me. Pour one out for Clayton the next time you ride!

Looks like a big winner. Very interesting layout and nice transitions. The name/theme is obviously very region specific, but Kennywood isn’t a theme park and Pittsburgh loves the Steelers. Even the Ravens, Bengals and Browns fans will ride this one.

Those whining about the theme can get over it or stay home and make the line shorter for the rest of us.

Excellent review, Russell! Like you, I've been a bit skeptical of this ride since it was announced, but it's great to hear that it's a really good and unique ride instead of one that is nauseating or repetitive. Kennywood has been high on my list for 2020, and I think this locks it in as a must visit for next year.

I'm with you Clayton, while sometimes I able to hit a few coasters and be fine there has been a few times I'll experience slight vertigo the next morning and like you it seems like my coaster days is winding down and i'm only 45! Robert has mentioned in the past he was going to write up some tips for riding coasters as we get older. I know for me, I make sure to drink more water and make sure I get on the coasters I really want to get one and take longer breaks between them. If it's a coaster I've been on many times, I just skip them and just get on the new ones.

@AJ - Not only did Kennywood open Steel Curtain, but it re-opened SkyRocket this weekend, which has been SBNO for almost a full year, though it was only testing on Friday when we visited the park for the media event so I didn't get a chance to ride it. Phantom's Revenge still has the best second drop on ANY roller coaster I've ridden (which is probably close to 200 by now) along with their classic woodies - Thunderbolt, Racer, and Jack Rabbit.

We have personally been avoiding Kennywood because my son wasn't quite tall enough for all of the rides until this year, and with Steel Curtain, it will probably enter our every 2-3 year rotation (we travel to eastern Ohio virtually every August, so a stop at Kennywood is right along our route). If you're visiting both Cedar Point and Kings Island on the same trip, it's not too far out of the way to visit Kennywood when traveling between the 2 Cedar Fair parks, and is definitely worth the diversion, especially with the addition of Steel Curtain.

If I wasn't visiting the park as a representative of Theme Park Insider, I would have absolutely worn some Ravens gear, and you better believe the Terrible Towel I was given at the event will be tucked away in my coaster swag bag never to see the light of day again. It was funny, because the park ran a contest for fans to be among the first to ride the new coaster at Friday's Media Day. There were a couple of contest winners that were wearing Detroit Lions jerseys among all the Black and Yellow. I asked them if they were just trolling all the Steelers fans, and they told me they actually traveled all the way from Detroit to ride the new coaster. From the looks of it, the Steelers Country, which is set to feature indoor games and other NFL-geared activities, won't be ready for at least another 3-4 weeks for those who want to get the full experience in addition to the new coaster.

All clear to dive into 2020 at SeaWorld San Diego