Take a trip back in time to experience Another Man's Dream

August 23, 2019, 5:09 PM · On a warm, rather humid but otherwise beautiful Sunday, my friend and photographer Scott E. and I went back in time at an amusement park. It wasn’t at Animal Kingdom on “Dinosaur.” It wasn’t in Frontierland at Disneyland, or on “Time Traveler” at Silver Dollar City. It wasn’t walking down Frontier Trail at Cedar Point. It was in a corn field just outside the town of Ross, Ohio — a short distance from I-75 just outside of Cincinnati, Ohio.

It was in a little, family-owned-and-operated amusement park that is only open to the general public for four days a year: July 4th, the 2nd Sunday in August, Labor Day and one day in October (along with a few extra days connected with the local 4-H County Fair, with which it shares a location). 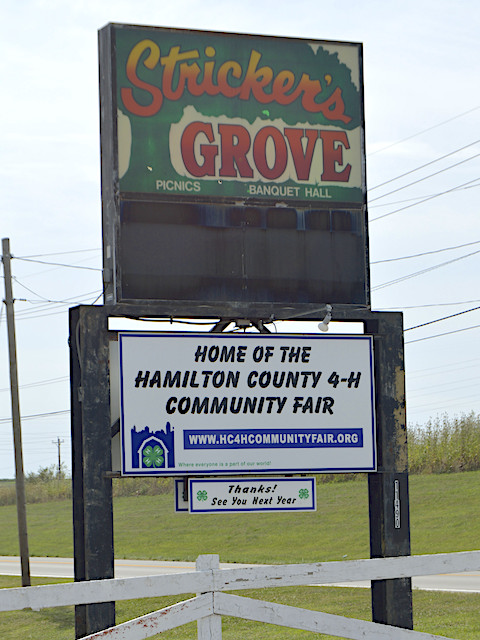 It’s called Stricker’s Grove, and it is a treasure in the amusement park world that must be experienced to be appreciated. You won’t find the biggest of anything here, or the tallest, or the fastest, and that is the magic of the place. It is slow, relaxing, friendly, clean, safe... adjectives don’t do it justice.

Stricker’s Grove began with one man’s dream. Ralph Stricker wanted to build a roller coaster. He contacted Al Collins, the Kings Island engineer behind that park’s legendary “Beast” and asked him to design a coaster that Ralph could build himself. Mr. Stricker began working on it in November, 1990 and finished construction in June 1993. The result of his years of labor is The Tornado, the only self-built roller coaster in America. Tornado is a double out-and-back woodie, 55 feet high with an initial drop of 50 feet and a track length of 2080 feet. 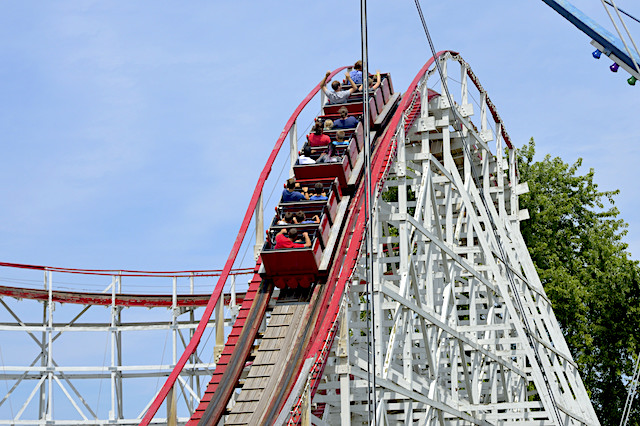 Are the Tornado’s technical stats impressive? No, but the ride is! I was amazed at how much air time this beautiful little gem of a coaster provided. However, if air time is not your thing, sitting directly next to Tornado is the Teddy Bear, a reproduction of a 1935 coaster by the same name at Coney Island in nearby Cincinnati. Teddy Bear is a quintessential wooden family coaster — not high, not fast, no air time, but the perfect introduction to the roller coaster world for children, families and for those who want to ride coasters but have a fear of heights. (I’m talking about Scott E.) With a height of only 28 feet, a drop of 20 feet and 700 feet of track, this “junior double out-and-back” is the perfect junior partner to its bigger brother next door. 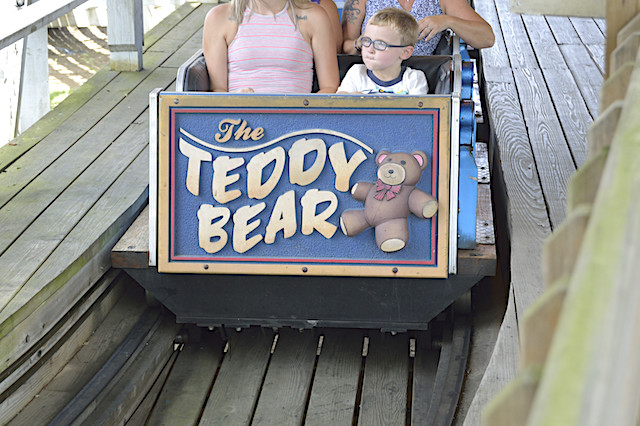 These two classic, history-reliving coasters share the single midway with 15 other classic amusement park rides, including a simple, old-fashioned Ferris Wheel of the kind I haven’t ridden since I was ten at the county fair, a small, beautifully-maintained carousel with a band organ, a Tilt-a-Whirl, a Pirate Boat Ride, and “Electric Rainbow” (a.k.a. a Round-Up) saved from the now defunct Americana Amusement Park in nearby LeSourdsville, Ohio. There' also a half a dozen small children’s rides including a “Junior Whip” and their own tiny version of Dumbo, a narrow-gauge train that circles the entire park property, plus an 18-hole miniature golf course and horseshoe pitch. A shooting gallery, a dozen Skeeball games and even more traditional carnival games and free soft drinks are just a few more of the attractions that bring the past to life at Stricker’s Grove. 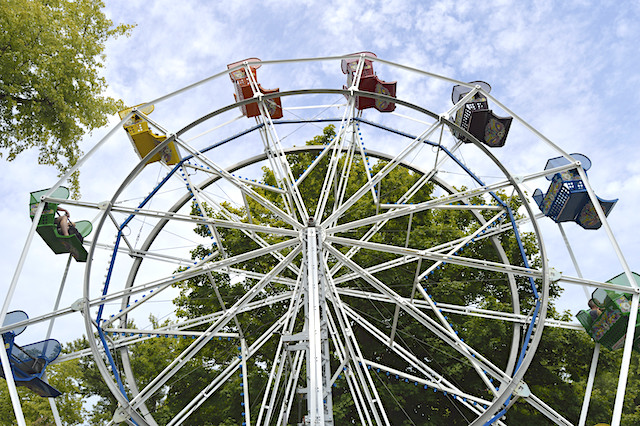 Now let’s mention the food. When you first enter the gate (admission was $14, but if you get on their email list, they’ll send you a coupon good for $1 off the price for up to four tickets), the first thing you smell is the food being prepared directly in front of you. A covered, open-sided pavilion contains an array of charcoal grills where the owners of the park — yes, the owners themselves, relatives and descendants of Mr. Stricker — are grilling hot dogs and hamburgers, roasting corn (which was literally picked that morning from the corn field next door!), and chatting with everyone strolling by. 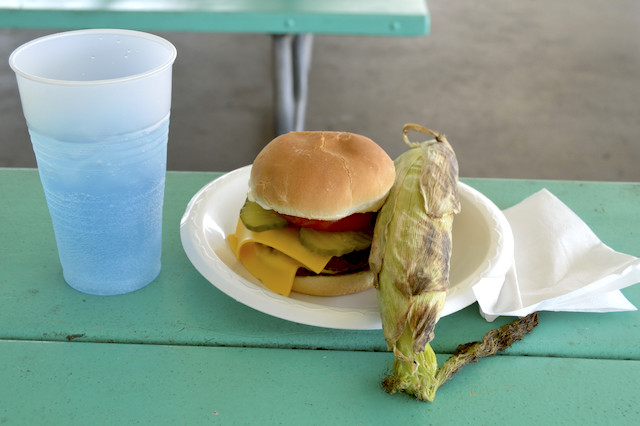 The delicious potato salad and macaroni salad is prepared by the gallon at a nearby family diner. Bowls of hand-cut tomatoes, pickles, homemade relish, and even homemade mayo (along with about a dozen other toppings) are available for you to pile on your burger yourself. As I mentioned, soft drinks are free, but adult beverages such as beer, coolers, etc. are available for about $4 a bottle. Compare these prices with what you pay at any other park in America! 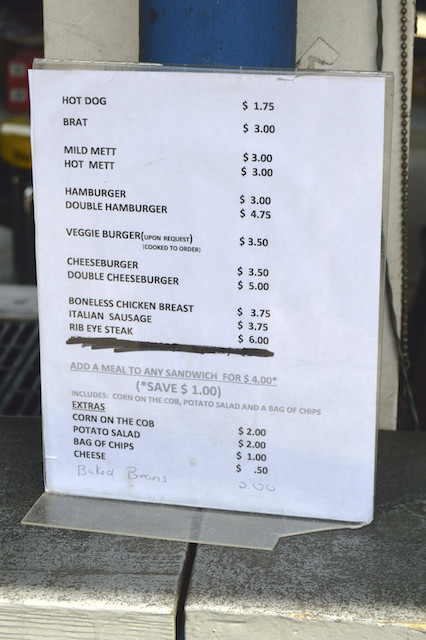 Stricker’s Grove is an amusement park from the middle of the last century, before Walt Disney convinced us all that everything had to be themed. Perhaps it’s a good thing that Stricker’s Grove didn’t exist when Walt took his daughters to Griffith Park, where he got his inspiration for Disneyland. Had he taken them to Stricker’s Grove, he’d have ridden the rides right alongside them. Stricker’s Grove was full of families, often of multiple generations, riding the rides, playing the miniature golf, throwing the Skeeballs, in some cases grilling their own meals (yes, you can bring your own food and even grills and prepare your own meal at one of the hundreds, and I am not kidding...HUNDREDS, of picnic tables located both under a huge shelter and under dozens of trees around the shelter building). Parking is free. 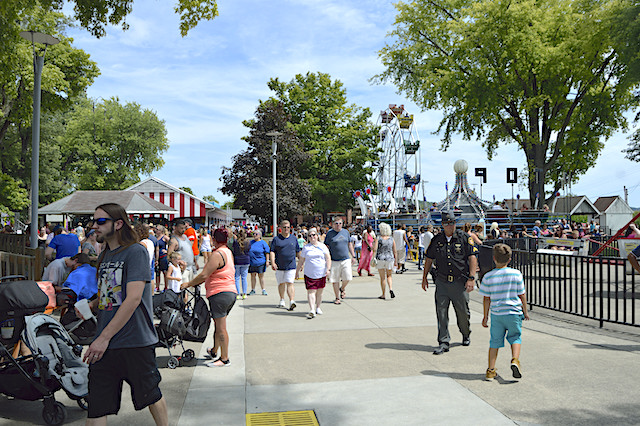 Just inside the front gate there was a lovely, little white-haired woman listening to a transistor radio, smiling at guests and greeting many of them. This was Agnes Stricker, 99-years-young and the sister-in-law to Ralph Stricker, who built The Tornado. I introduced myself to her, and she was absolutely charming in welcoming me to the park. The pride she felt in her park, and the joy she felt in seeing so many families come to spend the day with her was touching. I later met Ralph and Debbie (and some other family members/owners of the park — the ones in charge of the grills) and that pride shown in their smiles and enthusiasm in talking about their park. 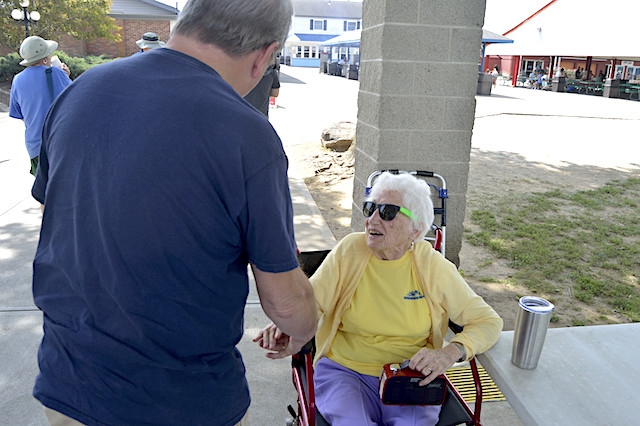 One thing they don’t have are souvenirs. You can’t buy a Stricker’s Grove T-shirt, or coffee mug, or refrigerator magnet. They don’t sell them. You want a shirt? Go to work for them. Every worker there of all ages were wearing them with pride, and the fun they were having showed. The red-headed young man loading and unloading the Ferris Wheel insisted on giving every child a high-five when they climbed into their seat. The engineer of the train greeted everyone boarding his train, and thanked them as they disembarked to head back onto the midway. The park was clean, the flowers adorning the raised planters running down the middle of the midway were lush and obviously well-tended — even the bathrooms were clean and air-conditioned! 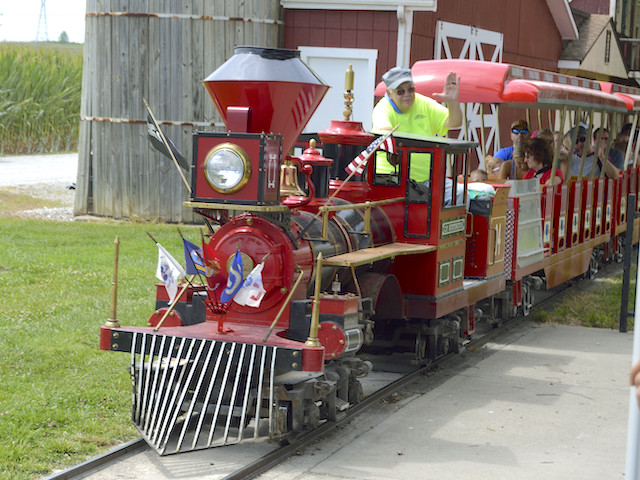 Ice cream comes in two flavors, chocolate and vanilla, and you feel adventurous you can also get it swirled. You can get it in a large cup or cone for a grand total of four dollars. (Want sprinkles? That’s an extra fifty cent. I got sprinkles.)

I’m not sure it’s possible to walk into Stricker’s Grove and not find yourself doing two things — smiling and slowing down. This is what happens when a family pours love into an amusement park, when that family and their extended family of park employees care about what they do, what they are sharing with their guests. I’d never been there before, I didn’t know anybody, but I felt like I was at a big, happy family reunion where everyone was happy to see each other again, to share the day riding the Scrambler and the Flying Scooters, to chat with people while waiting in line for the Tornado or Ferris Wheel, and to go back to a simpler time and place. 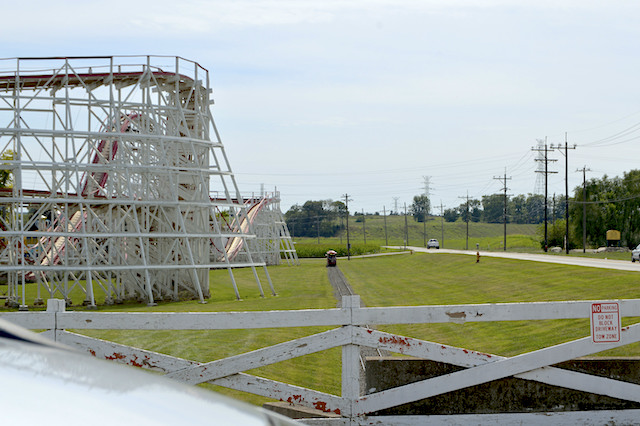 Stricker’s Grove is a national treasure, one to be shared with those you love. I can’t wait to get back!

Really great, unexpected review of a place I never knew existed. I plan on meeting you at this little gem of a park on one of its four operating days in 2020! Count on it!

I was incredibly glad that I was able to stop by this park myself in 2014. Like you say, it is a treasure and very unique in the world of amusement parks. Many enthusiasts look at only the big corporate parks like Six Flags and Cedar Fair, but when you travel beyond those you can find all sorts of interesting places. Excellent report, Jim!

Thanks for your kind words, but I'm almost disappointed that you've been there already. I thought I might have actually ridden two coasters that you haven't! Actually, I think I have. The Jumbo Jet at Cedar Point (1972-1978) which is now in Minsk, Belarus, and Avalanche Run, also at CP (1985-2012). I just loved driving to this park- as you leave the small town nearby and are driving out into the countryside, you look up ahead and in the distance you see what looks like a roller coaster! It's a coaster junkie's version of the Field of Dreams! He built it, and we came.

Beautiful report James, thanks so much for sharing. I love hearing about unique little places like this.

Thanks, Ben. It had been too long since I sent something in for Robert to post. I feel that we need to keep reminding everyone that not everything in the theme/amusement park universe is located in California or Florida.

Excellent report! I'm glad that you covered something so out of the way and unusual. What a charming place. One thing I don't get is why it's open to the public only four days a year.

Thank you for such a great report. We are losing far too many of these great family parks and it's nice to hear the history of Stricker's. I grew up near Tulsa, OK and still mourn the untimely demise of Bell's amusement park as do so many Tulsans. The Zingo was also a self built coaster and I would argue Phantasmagoria as the best small park haunted dark ride. Gonna have to make a trip to Stricker's next time I'm in the area.

This is fantastic, James! I have a new destination on my park bucket list!

Thanks, everybody! I wondered if there was going to be much interest in a little park where the only mouse to be found came from the neighboring corn field! Bobbie, Stricker's Grove is only open to the general public those four days, along with during the 4-H Fair (see the park's sign) but it's open lots of other times for company picnics, church events, weddings, etc. Go to their web site and you can see a list of the services they offer for rentals. Sometimes a company will rent the entire park, while other times a few smaller companies will get together and share the cost (and the rides). I don't know exactly how often they're open during the average year, but it's certainly worth going to if you're in the area (or can plan on being in the area during one of the 4 days).

What's going on with Disney, Sony, and Spider-Man?