Cedar Point Celebrates Its Anniversary With the Unexpected

June 22, 2021, 7:28 PM · Cedar Point has returned from the problems of the past pandemic year with a vengeance. Not with a Steel Vengeance, but in a way quite unexpected for a theme park known for roller coasters and Peanuts characters. In May it reopened with a majorly successful Frontier Festival of food and fun, in support of the Prayers From Maria Children's Cancer Foundation, and this year it has decided to premier two major events to celebrate its pandemic-delayed 150th Anniversary as the nation's second-oldest amusement park.

The first is the return of a beloved and deeply missed attraction from the past. The Cedar Point lagoons that have woven their way through the western end of the Point since the late 1800s have long been used for rowing, canoeing, and more recently as the site of the Western Cruise, where paddlewheel boats carried visitors past slightly-animatronic scenes of backwoods life with wild critters. Closed for several years to provide access for Dinosaurs Alive, Shoot the Rapids II and Forbidden Frontier on Adventure Island, the lagoons once again can be enjoyed by visitors - or should I say adventurers - boarding one of Trapper Dan's riverboats on Cedar Point's newest ride, Snake River Expedition. 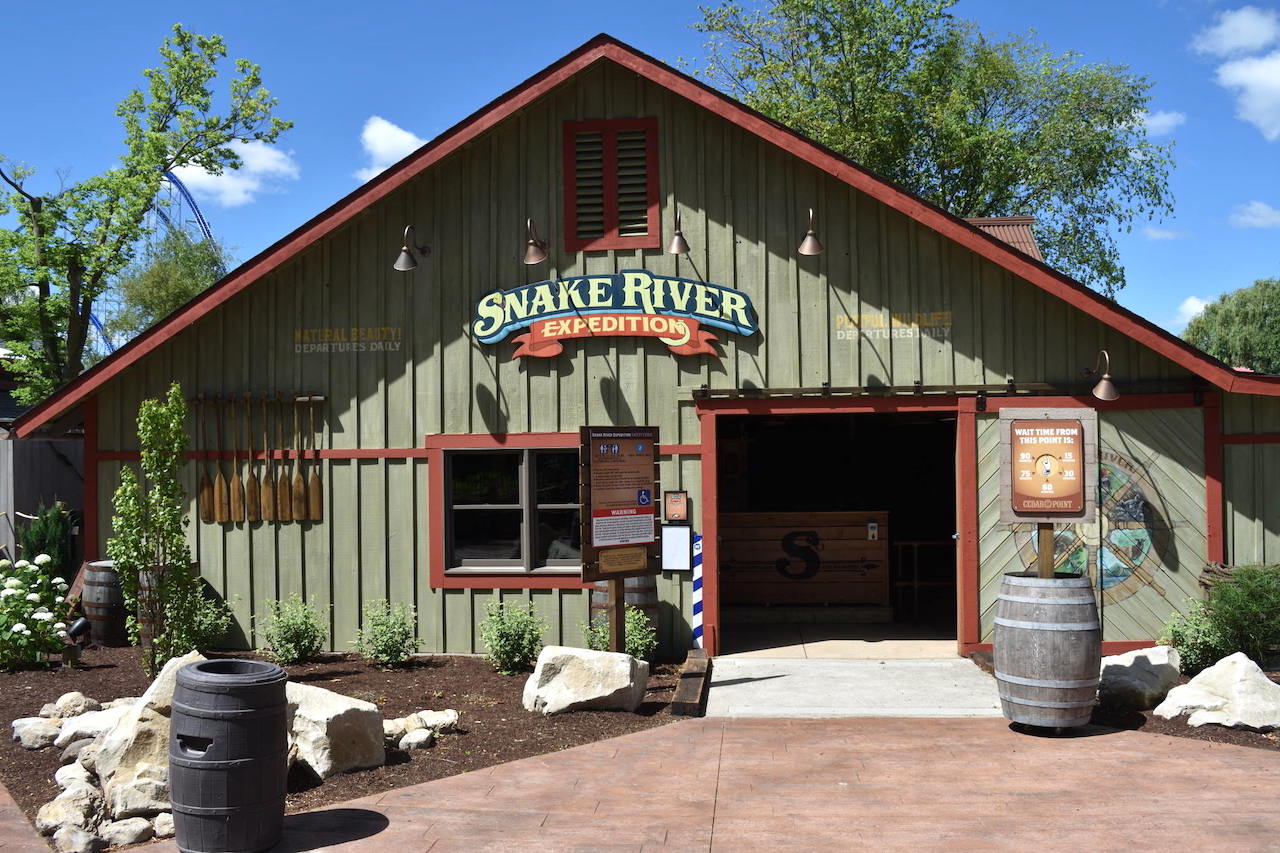 New boats, new scenery, new animatronics, live actors and a rather silly and campy storyline help to fill a gap in Cedar Point's options that has been obvious for years - the need for a fully accessible, family-friendly interactive adventure for all ages. The jokes are corny - not Jungle Cruise groan-worthy corny - but fun and presented energetically by a cast that was obviously having fun and made sure we did, too. 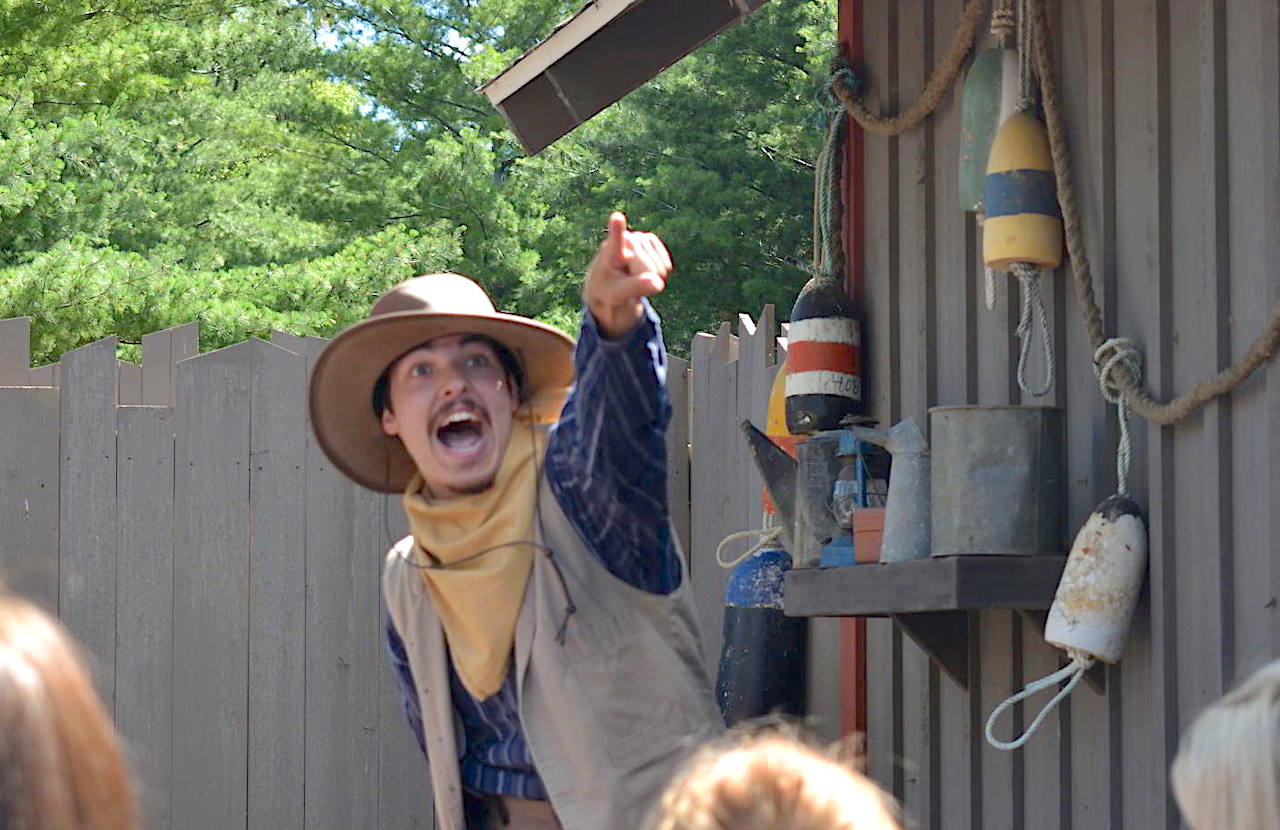 The Media Day event where we got to ride it made sure that we didn't need to wait in line, and what I briefly saw in the queue building made us go back after the ride and explore the remarkable theming that we had been rushed past earlier. Someone has been collecting an amazing assortment of antique stuff - farm tools, hunting traps, antique furniture - the list would go on and on. Imagine that old abandoned house and barn you've driven by for years. Wonder what was inside? You can find out just by exploring the entrance queue building of Snake River Expedition. It is hands-down one of the best themed queues I've ever seen in any park, Disney included. 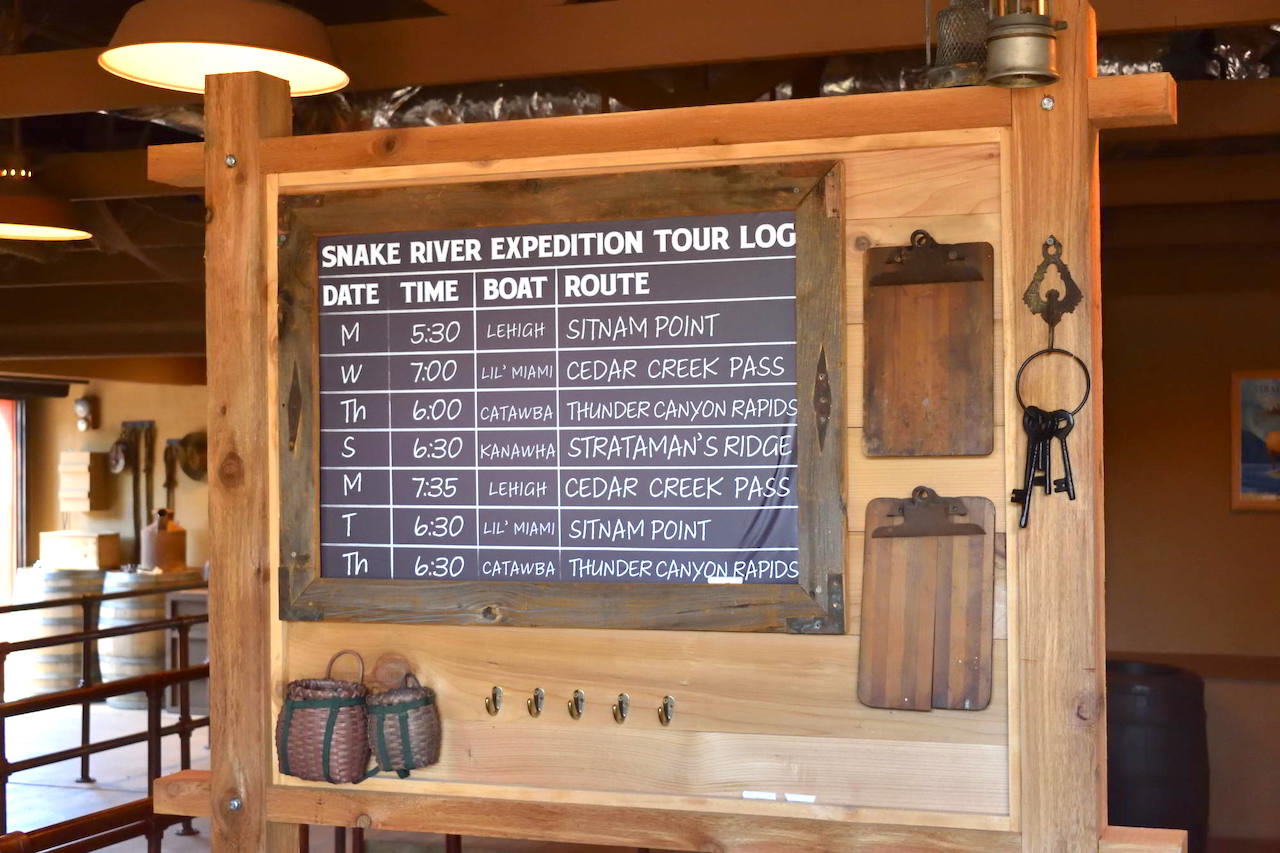 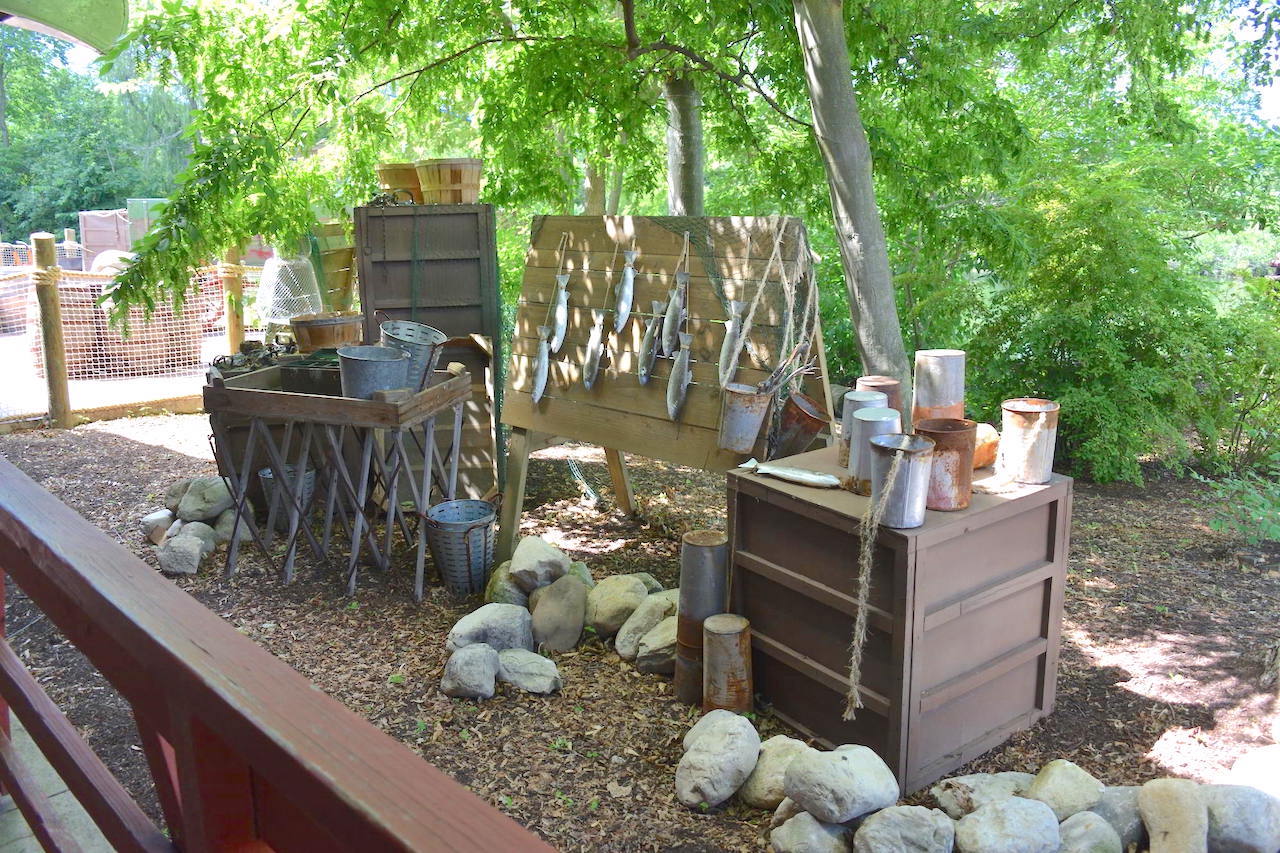 It's not the kind of attraction you'd probably want to ride multiple times during one visit to Cedar Point, but I'm looking forward to re-riding it throughout the season to see how different cast members present the Expedition and how they change and develop their presentation. I suspect that it - like the granddaddy of all water excursions, Jungle Cruise - will have the skippers and cast members grow into their roles and that their roles will grow through the season. 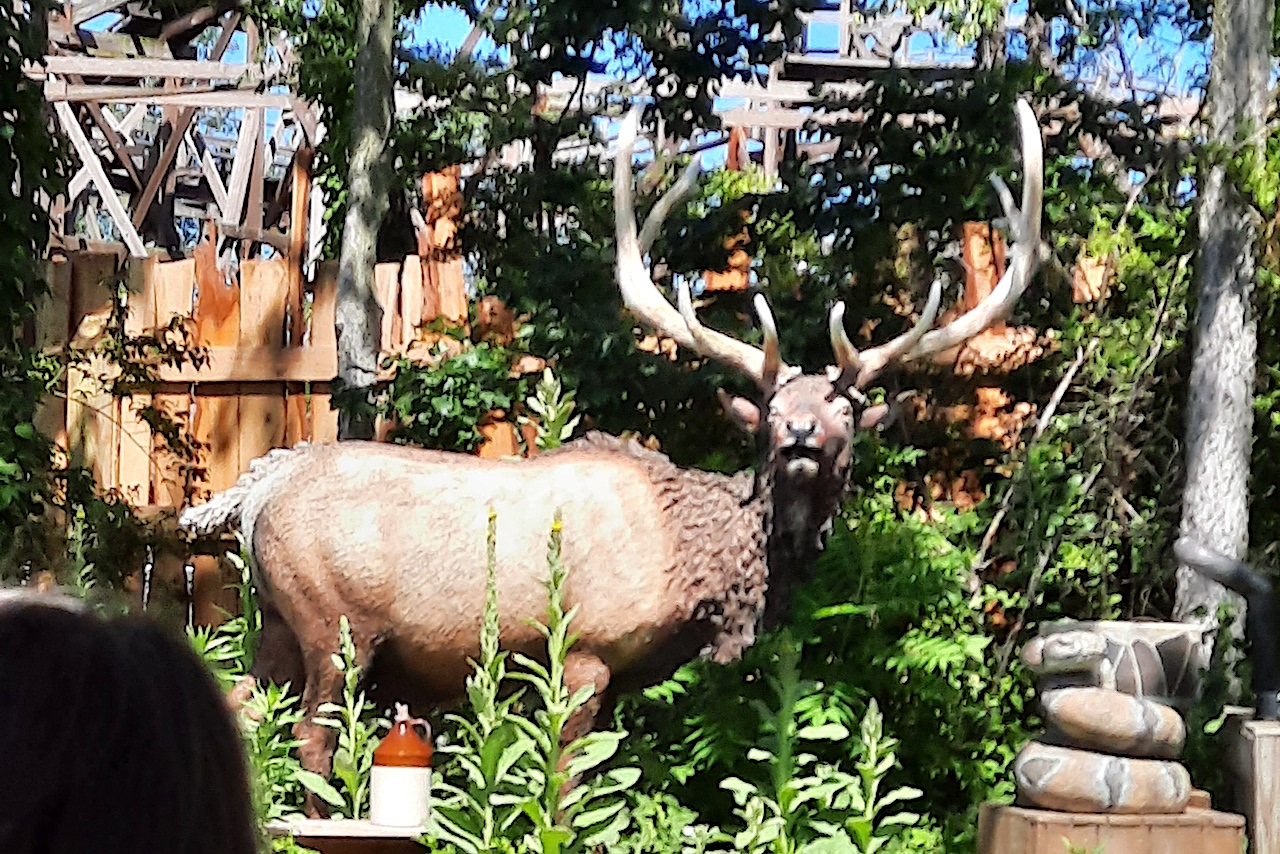 Even in its early incarnation, Snake River Expedition is a welcome addition to the Cedar Point family, one worthy of Cedar Point's rich traditions and history and well worth exploring.

The second major event that is being presented to celebrate the Sesquicentennial (150 years) of Cedar Point is the first major parade the park has ever offered (I don't count the below-average HalloWeekends parade they roll out every season). Celebrate 150 Spectacular is just that - spectacular, especially for a park not known for presenting parades. 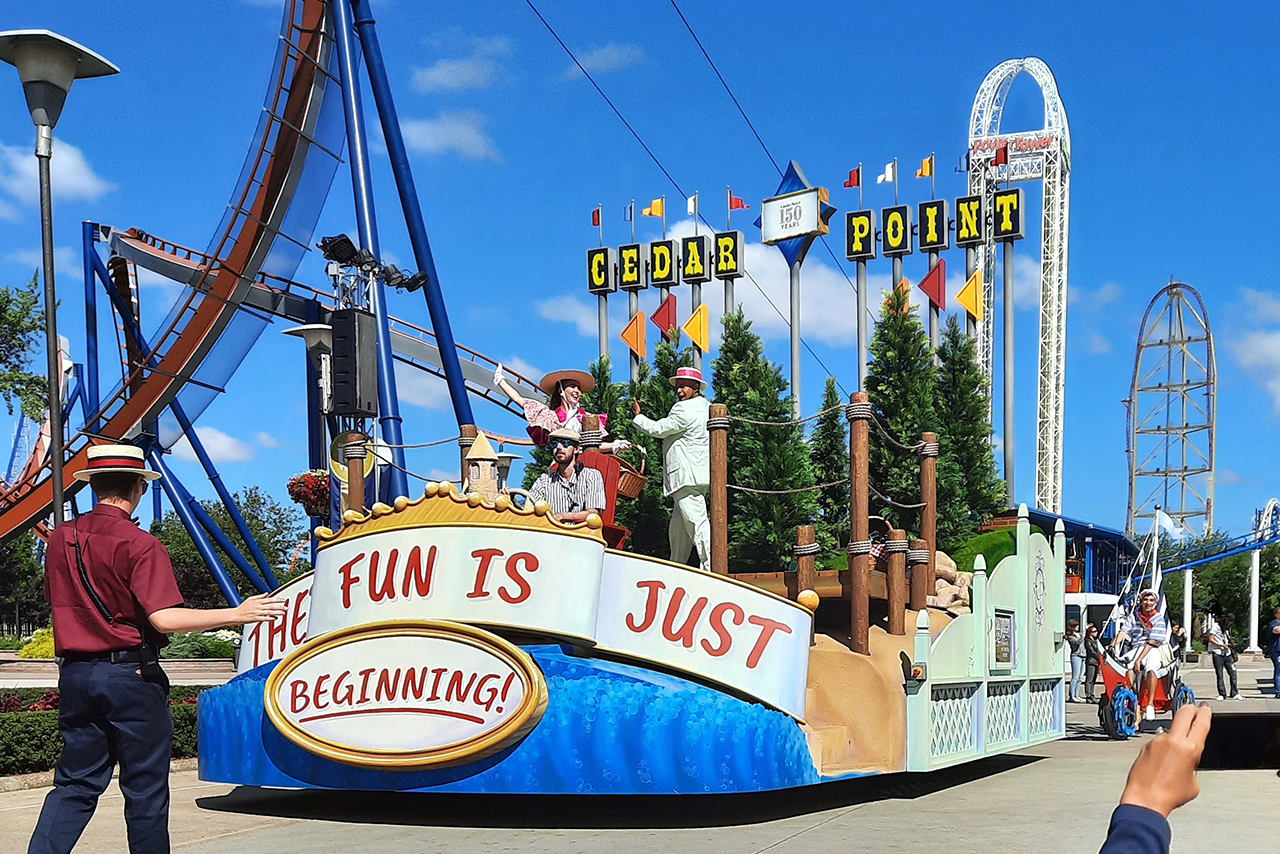 Twelve floats and more than 150 performers, dancers, drummers, skaters and acrobats presented an amazing tribute to the past 150 years of Cedar Point. Recreations of past Cedar Point attractions, going back to the Wave Swing that actually sat in Lake Erie just off the beach (and that reportedly tended to tear some rider's swimsuits off...but not in this parade!) and the original Paddlewheel Boats, and much-loved carnival games as Fascination and Guess Your Weight are joined by floats depicting modern favorites as Valravn and Gemini, along with Power Tower and Cedar Downs. Even the Breakers Hotel float is the setting for some high-bouncing acrobats. An original soundtrack and song, "The Fun is Just Beginning!", an enthusiastic, extremely talented cast and what promises to be a magnificent light show makes Celebrate 150 Spectacular the best live performance that Cedar Point has ever offered. 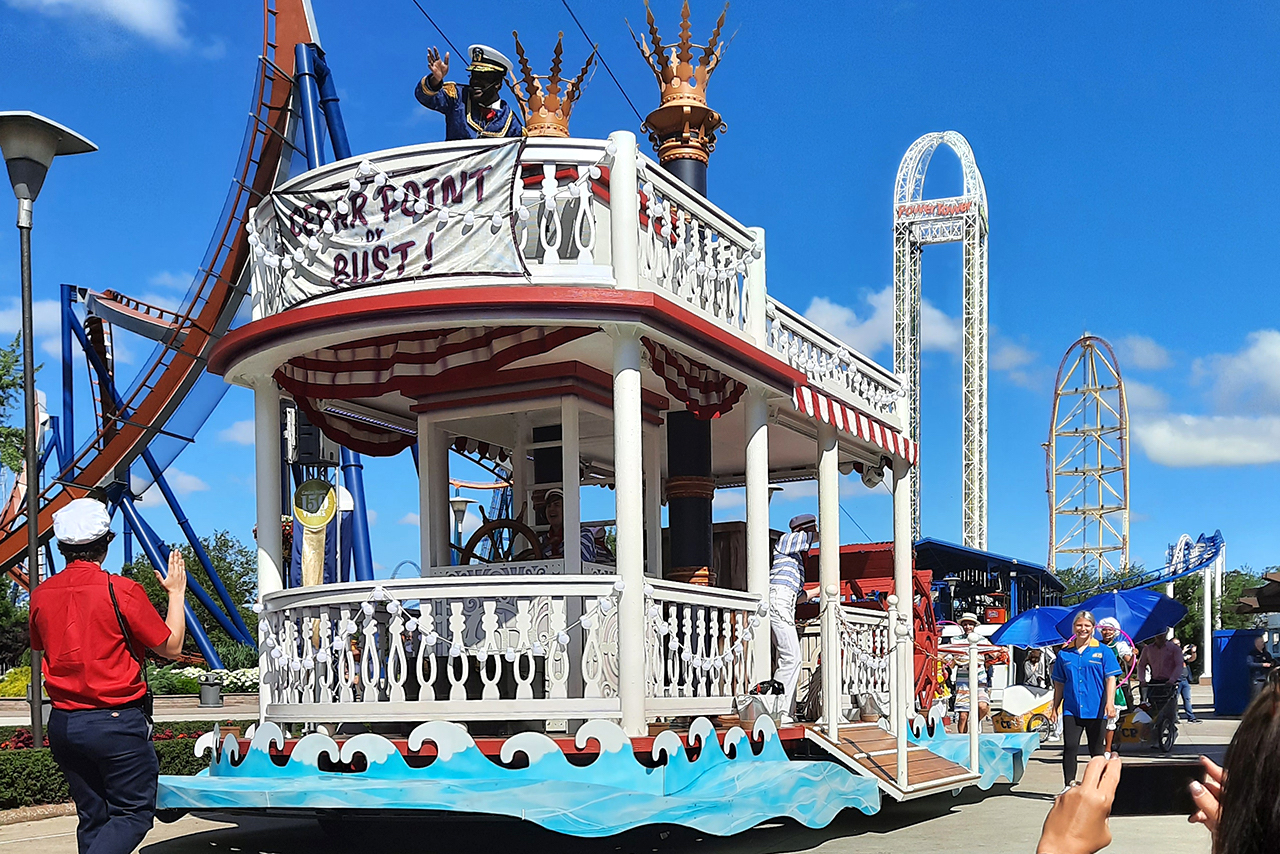 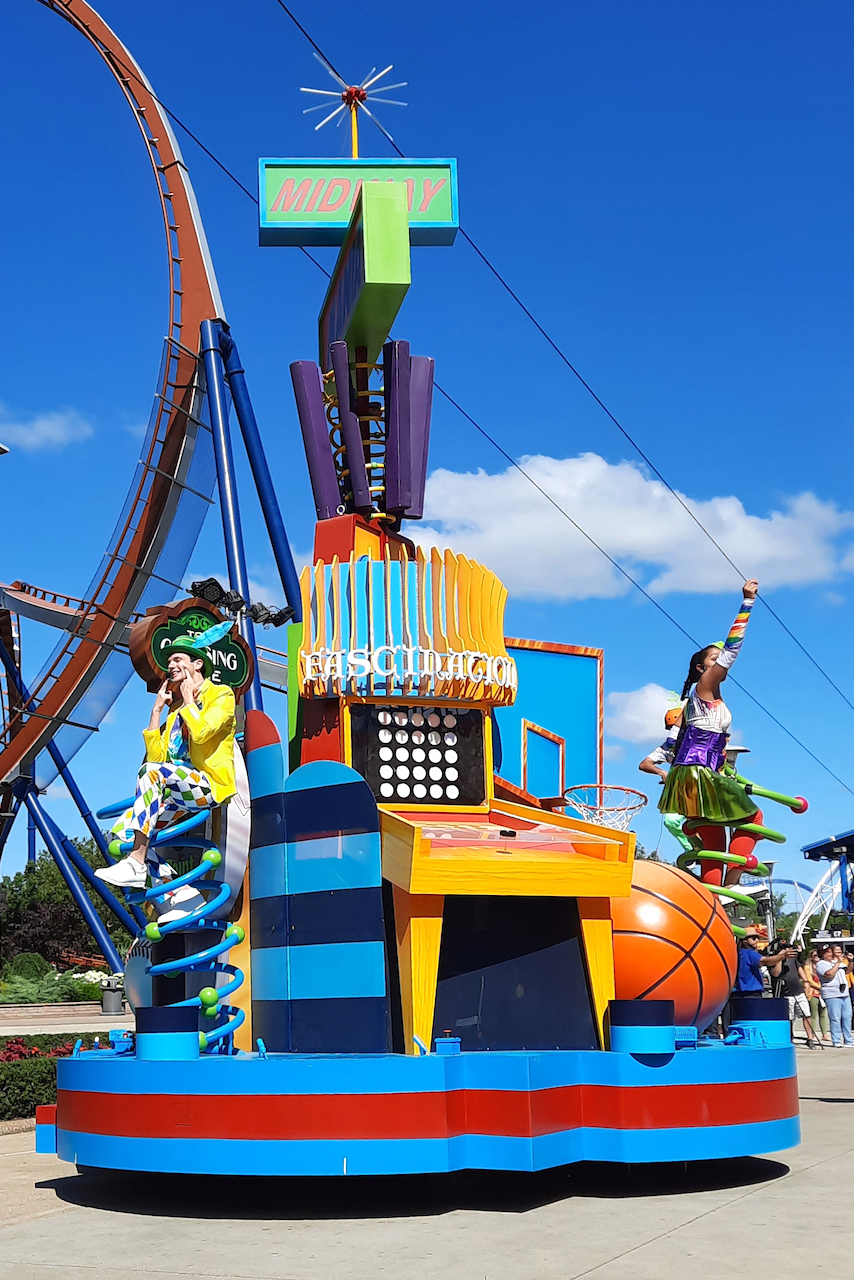 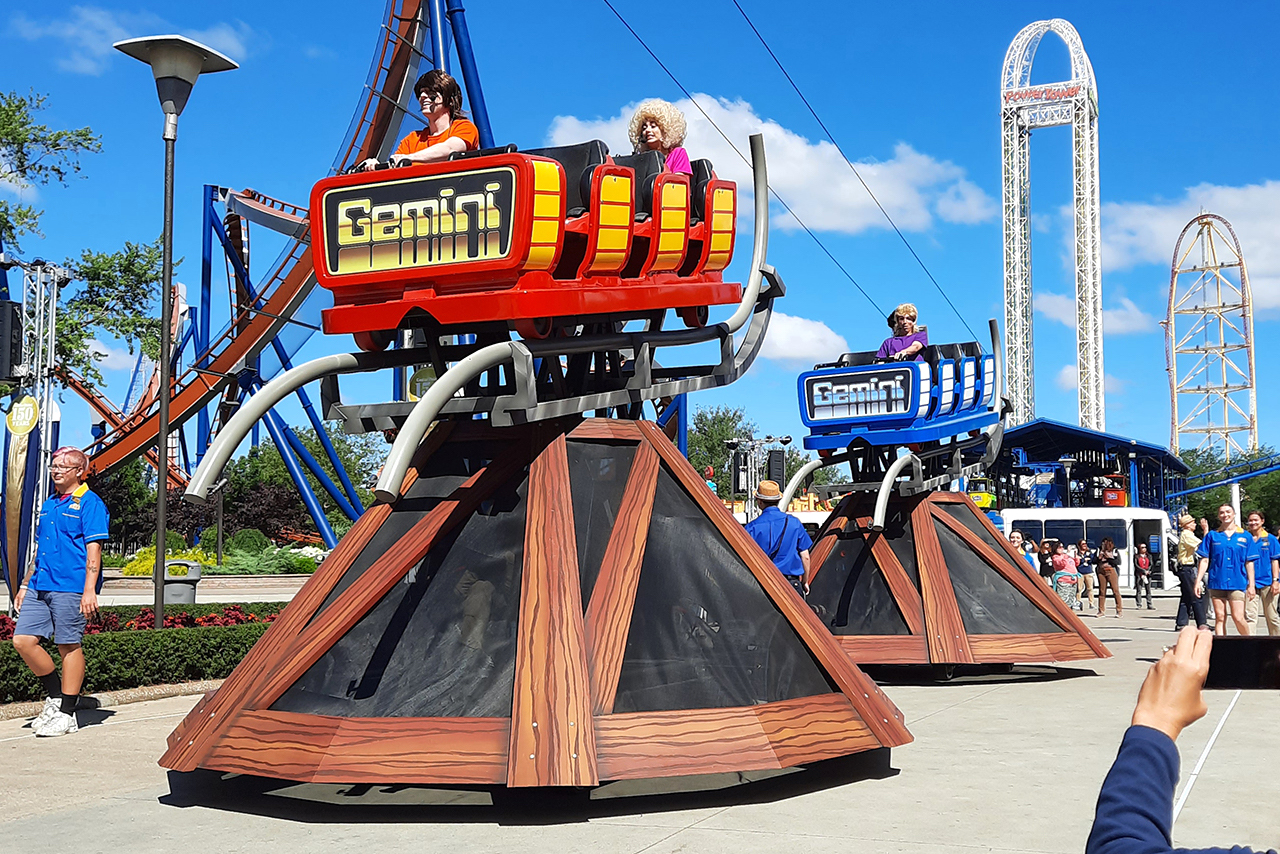 The parade will be presented every evening from June 26th to August 15th at 8:45 p.m., and the parade route starts near Gatekeeper, passes down the Lakeside Midway, turns past Planet Snoopy, then heads down one side of the Midway towards the front gate, turns and proceeds on the other side of the Midway to Celebration Plaza, where the parade and its cast will proceed to invite everyone watching to join in for a huge dance party. We saw the parade at 10 a.m. on a beautiful, sunny day. I can't wait to see it at night, with the on-float and surrounding lighting in full effect.

Cedar Point got off to a rough start this year, hit especially hard with the staffing problems that are affecting so many major operations. It regrouped, made some tough decisions to rectify the problems, and has come back with a vengeance - ok, a "steely vengeance"! New food options, a vastly expanded collectible button program, some terrific new ride and entertainment options, and a general feeling of commitment I got from the staff we met showed me that Cedar Point is back.

Having just spent a couple of days at the 100th anniversary celebration for Knott's Berry Farm, it seems clear that Cedar Fair is "borrowing" the best ideas from their various properties to build a brand that feels, dare I say it, unique. The Cedar Fair brand is starting to represent: immersive, story-driven theming (built on the original frontier-land concept of Knott's Ghost Town, or the histories of the parks themselves), delicious, over-the-top (and instagram-worthy) food building on local traditions (boysenberries at Knotts, cherries at Cedar Point), high quality thrilling attractions, well-produced entertainment, and family-accessible rides that make a day at the park fun for young and old alike. If that sounds like Disney, I'm sure it's no coincidence, but I was startled by how well Knott's was setting up the story that they've always had this central role in their guest's lives. As an example, my family and I went on the rapids ride several times, even though it used to be a snoozer, because every time we went we noticed more details, including a yeti animatronic that actually works (haha). When Cedar Fair bought Knott's, it seemed like they were going to try to turn it into a cement coaster park. Now it seems like they know what they have, and are using it to build something much more impressive. (At Knott's, we also noticed the cast members' pride in being back to work, and in newly-refreshed costumes). Glad to hear that Cedar Point is getting similar treatment, and bravo to Cedar Fair for building something bigger than the sum of its parts!

Were you able to tell if operations were better James? We're planning to head up to the Point at the end of July (after they return to 7-day/week operations), but don't want to deal with the operational and short staff issues that plagued the park through most of May and early June.

The park was closed to the public- same today. I think this is the last week of that. I've not been there yet this year other than for media day, but I've heard that it's getting marginally better, but still long waits for major rides. I know that they made a big push for employees and still are advertising all over, so if you do come prepare for some waits. I wish I had better info for you, but you might want to watch the fanpages for more info, good and bad.

Went to Cedar Point for the first time last Friday. We spent 4 consecutive days at the past since we drove from Virginia. Overall, I was very pleased. The park was very clean and had some great rides.

Ride ops were poor generally. Very slow and unclear. Painful to watch them loading rides at that pace.

Many food locations were closed but a few more started reopening our last day. No entertainment open Friday or Saturday but one small show opened Sunday.

Really enjoyed the boardwalk/beach area and the marina which are unique for this park compared to all others we've been to.

This is great news. Thanks for sharing it with us.

The music for the parade might have a Disney connection since the composer for Cedar Fair's Grand Carnivale Parade (Scott Erickson) likely produced the music for Celebrate 150. He has done parade and show music for Disneyland Paris and Tokyo Disneyland, so he knows his stuff!

Hello, Its post very fantastic. I don't know about this, But with the help of this article, I have understood very well. I will talk to you later about this, Now I would love to cheap research paper writing service from https://studyclerk.com/research-paper-writing website because one of my friends has bought it and really impressed by the writers.

Disney to Try Again on Tower of Terror Movie

Six Flags Gets Into the Credit Card Business