March 7, 2022, 2:30 PM · Food and drinks are big business in theme parks, and many parks are following Disney’s lead in using seasonal food festivals to draw guests to parks during traditionally slower times of the year. The festivals help to encourage repeat visits from locals and help virtually every month of the year feel special. The Seven Seas Food Festival at SeaWorld Orlando is just one of the many seasonal food festivals that even regional theme parks have started to introduce into their annual schedules. This year's festival runs Thursdays through Sundays through May 8 and features over 200 different food and drink items served at 24 kiosks scattered around the park, along with 28 concerts staged at the Bayside Stadium.

We stopped by SeaWorld Orlando on the Sunday of President’s Day weekend and as we explored the various kiosks, we couldn’t help but notice the immense popularity of this festival. While it was a holiday weekend, there were lines for pretty much every stand from the early afternoon until well into the evening. Also, some items and beers became unavailable later in the day as I think the crowds and popularity of certain dishes caught the park by surprise. Guests can purchase individual items at various prices noted at menus posted at each kiosk, or they can purchase 10 or 15-item tasting cards that can represent as much as a 50% savings compared to buying items individually. We ended up buying a 15-item tasting card and made our way around the park using it as our lunch for the day. FYI, while you can use the tasting cards for samples of beer, wine, and mixed drinks, the sizes of those samples are smaller than what you receive if paying the individual menu price. The sizes of the food items are identical whether you use a tasting card or purchase items individually, so I would recommend using the tasting cards for food items only for the greatest value, and purchasing drinks separate for a full serving of those beverages.

Our first stop was the Caribbean Market. We sampled 2 dishes from this kiosk. 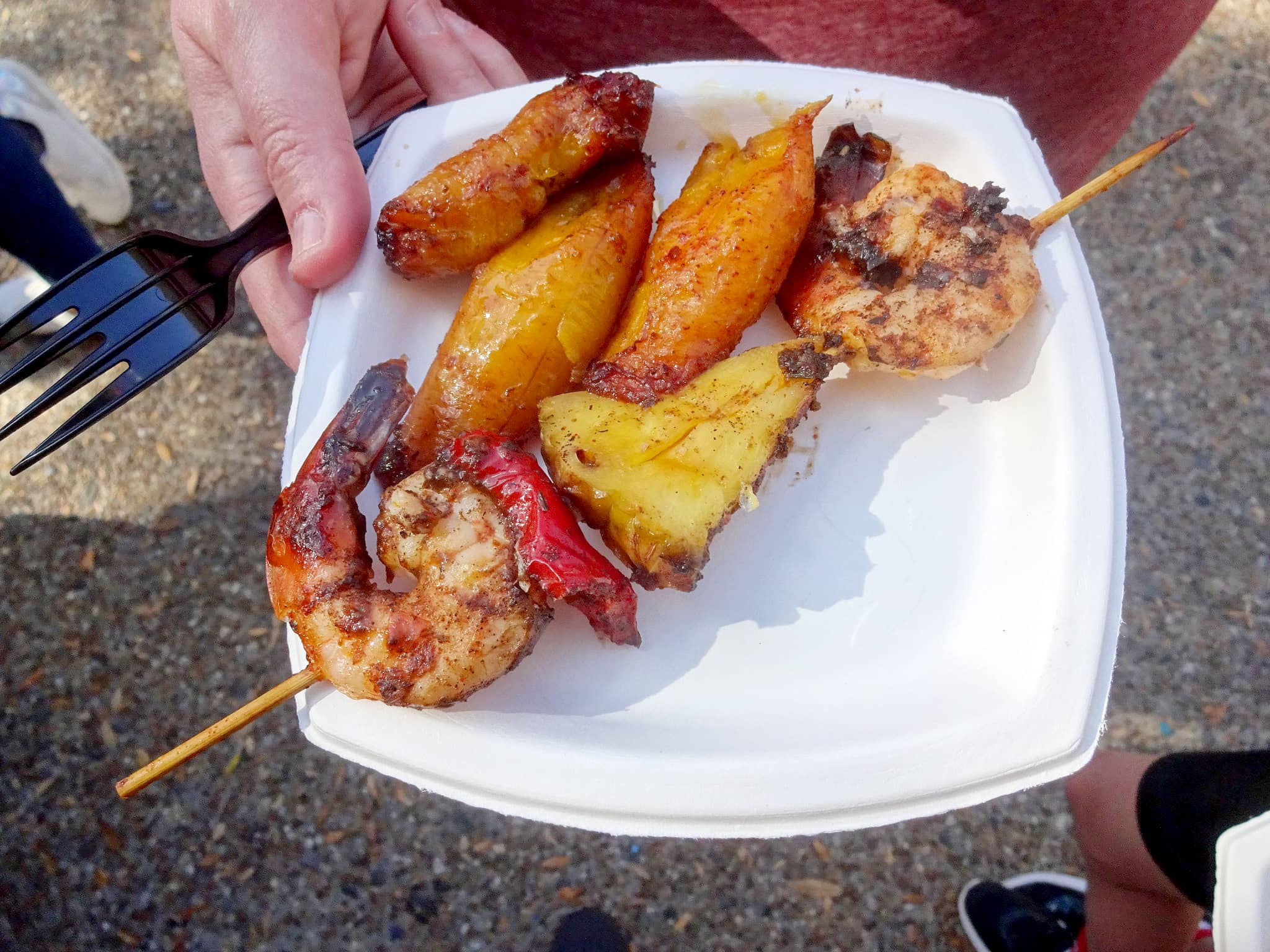 Montego Bay Spicy Shrimp Skewer was a tasty first dish. The shrimp were large and well cooked with a good bit of spice, but not too hot. The grilled pineapple chunk and pepper slices were fine, but I would have traded these 3 pieces for a 3rd shrimp. The fried plantains were delicious and balanced perfectly with the shrimp without being too sweet. 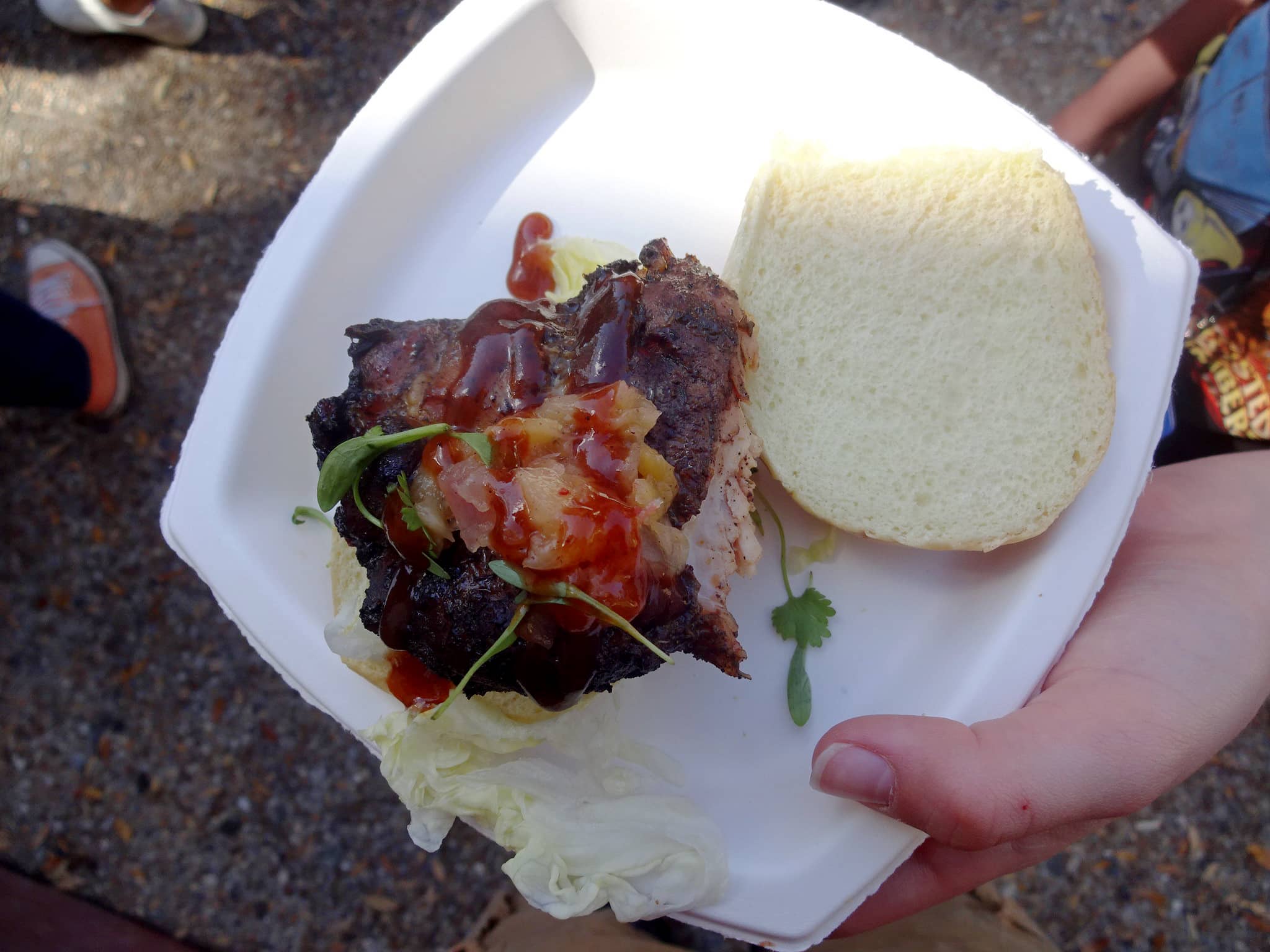 Next up was the Jerk Chicken Hot Slider. I was pretty impressed with the flavor of this dish, because it didn’t look that special at first glance. Maybe it was because I was hungry from an early morning of travel to Orlando from DC, but this was a well composed sandwich. I think some might want a bit more jerk seasoning, but I thought it was just the right amount to balance with the dollop of pineapple salsa. Zach isn’t a big pineapple fan, but still enjoyed this dish.

Our next kiosk was the All-American Market (presented by Kraft). 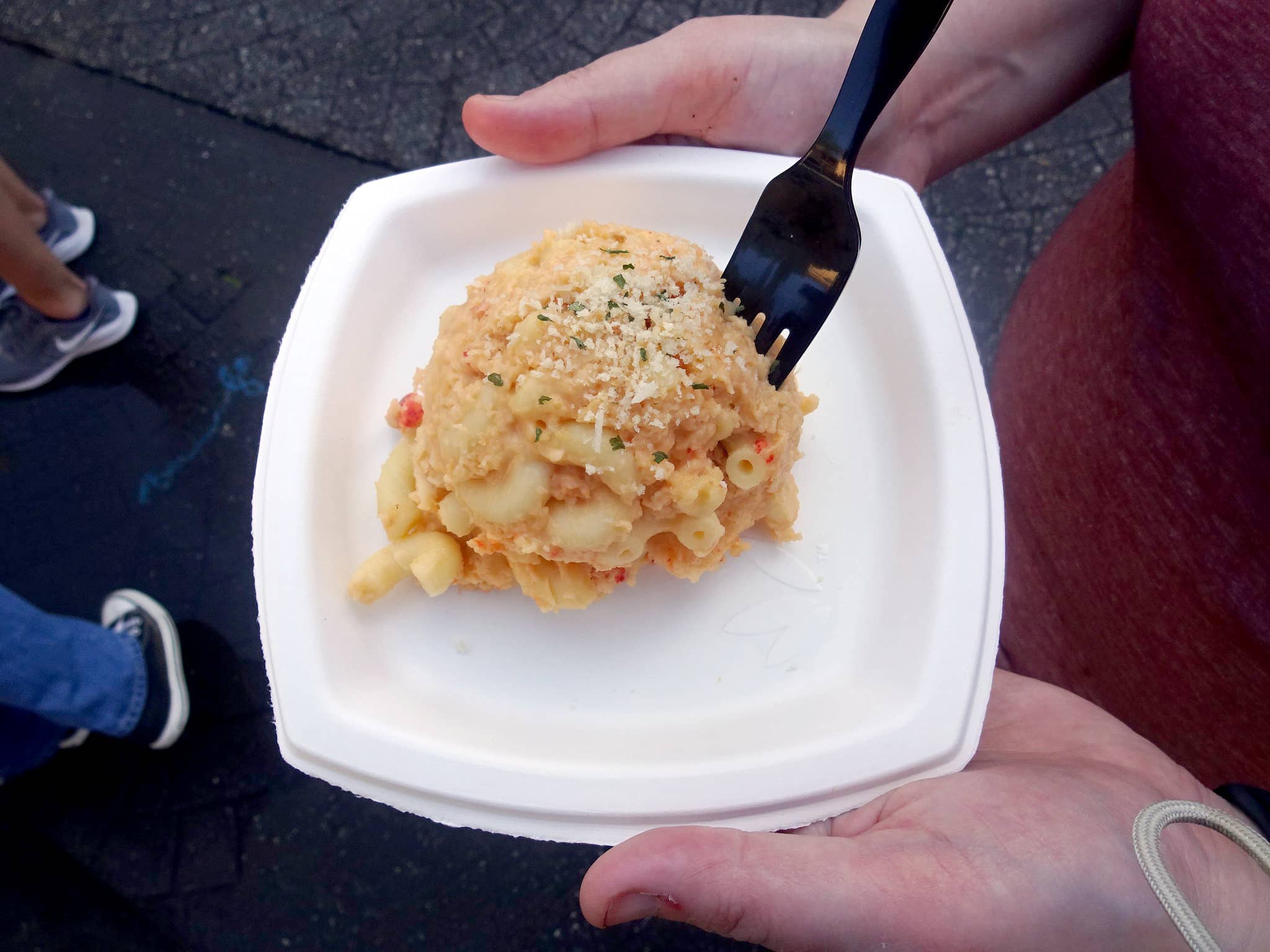 We decided to go top shelf here with the Lobster White Cheddar Kraft Mac N Cheese. We probably should have skipped this dish, because it wasn’t that great. Typically, lobster mac and cheese has chunks of lobster placed on top of a bed of cheesy macaroni, but here it was a scoop of a cafeteria-style casserole with the lobster already mixed in and some dry bread crumbs sprinkled on top. There was a decent amount of lobster in the serving for its price, and there was a strong lobster flavor throughout through the addition of lobster bisque to the mixture. However, the texture wasn’t that great, and the presentation left a lot to be desired.

The Polynesian Market was next on our tour.

Our first time around the park we grabbed the Spicy Tuna Poke Bowl. Zach is a massive fan of poke, and we knew this dish was good when we had to practically pry the bowl away to taste a single lonely cube of tuna before it disappeared. The chili aioli drizzled on top adds a good kick to the melt-in-your-mouth tuna, and the marinaded seaweed, pickled onions, and cucumbers added a nice contrast to the savory fish. 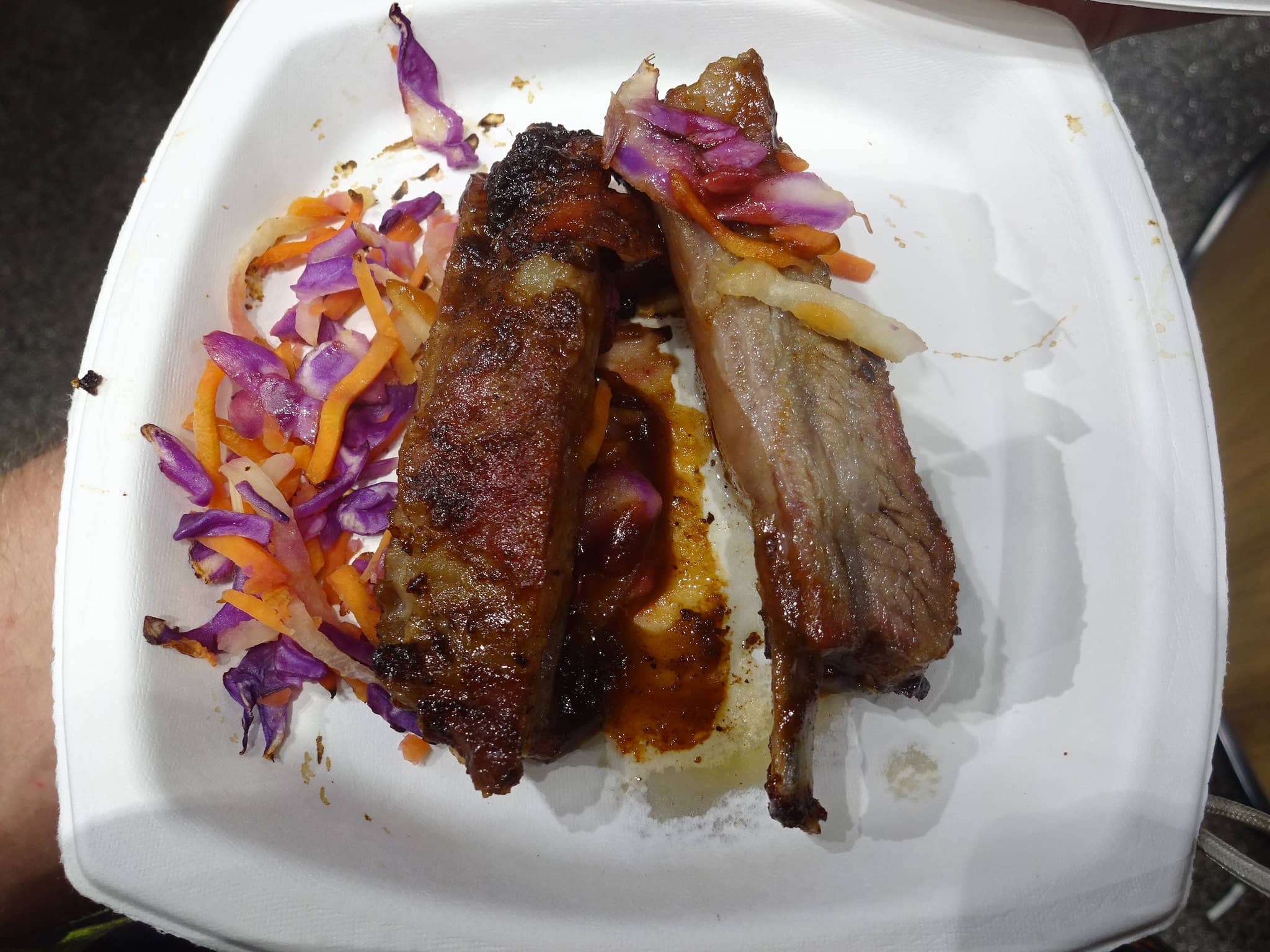 Later in the evening, we ordered the Lu’Au BBQ Lamb Ribs. The sauce on these ribs is a textbook example of a Polynesian BBQ. However, while the lamb was cooked well and the ribs were tender, I think this would have worked better with traditional pork ribs.

Next up was the North Atlantic Market, featuring tastes from New England. 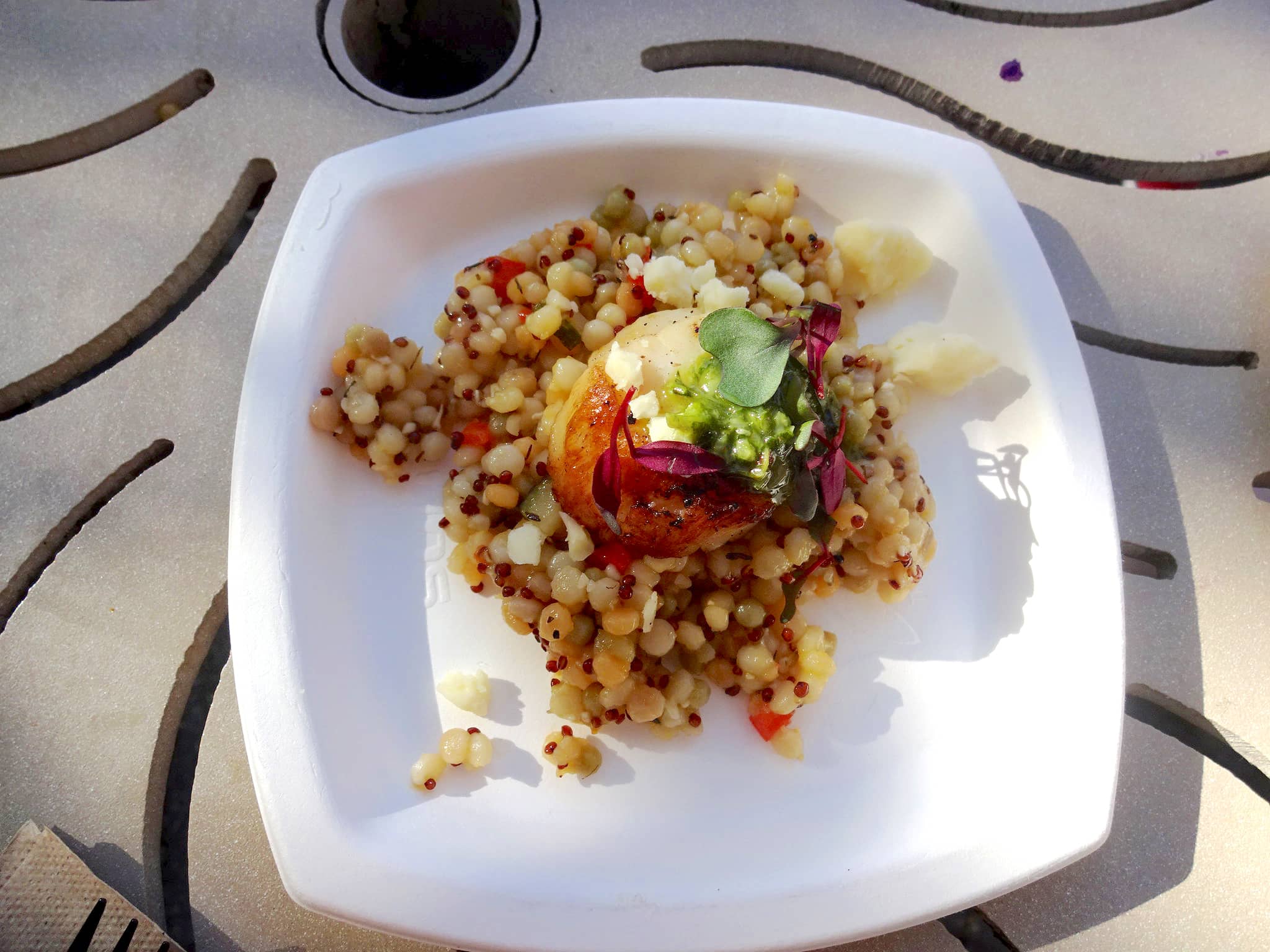 We ordered the Pan Seared Scallop, which came served on a tapioca risotto, grilled vegetables, and Cabot cheese. The tapioca risotto was an interesting spin with grains larger than quinoa or couscous, but smaller than rice or corn. The lone scallop was quite large and was well seasoned with what tasted like a chimichurri sauce on top. 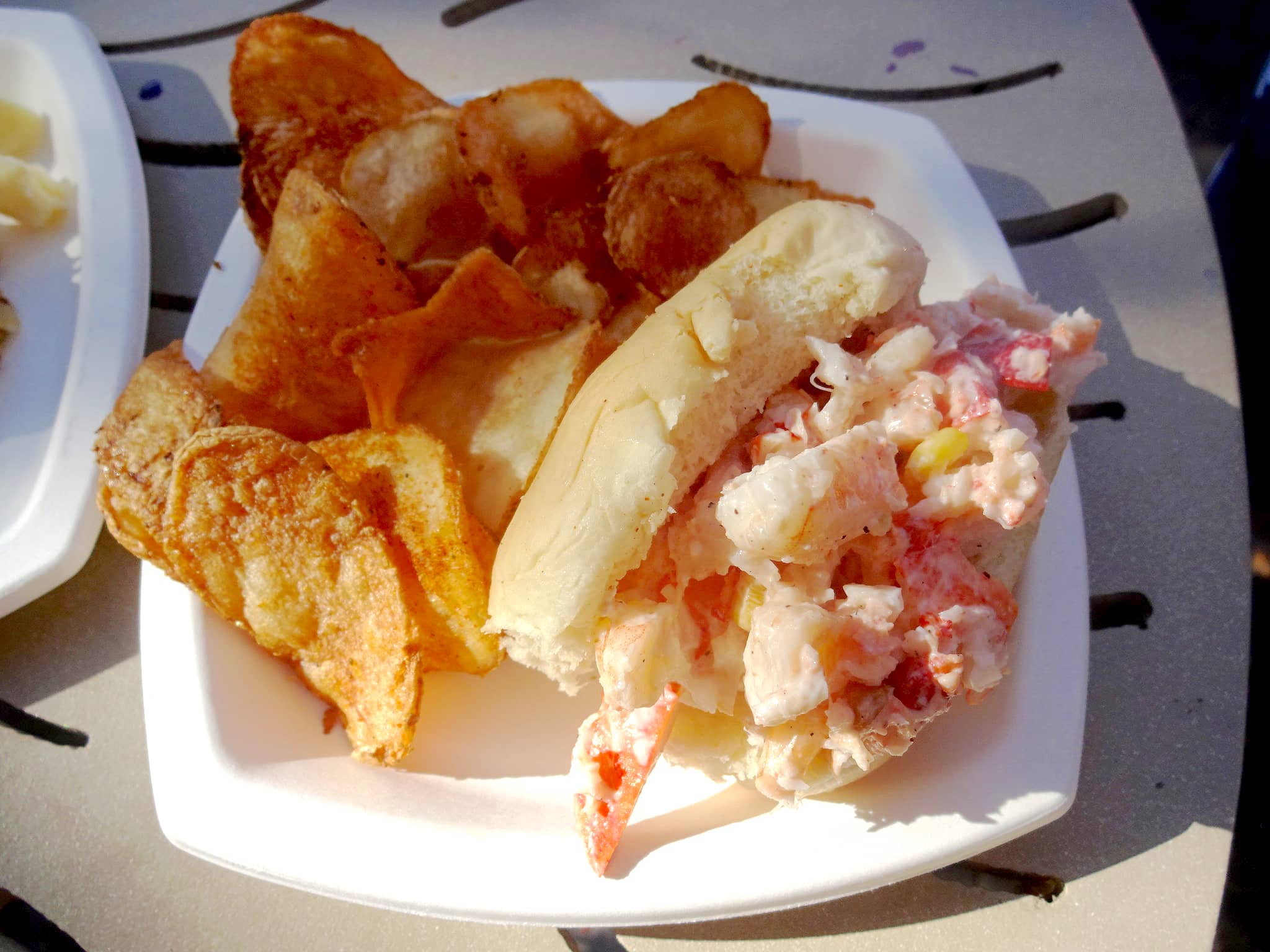 The other dish we tried from the North Atlantic Market was a New England Lobster and Shrimp Roll. I think mixing lobster and shrimp was an excellent choice here since lobster can be so expensive that the amount of meat on a roll at this price point would have been disappointing. Mixing shrimp in allows for a heartier portion with a roll that’s overflowing with protein and not drowning in mayo. The hand-cut chips were also quite good, and obviously not from a bag.

After we passed a number of booths that served predominantly drinks and dessert, we made our way to the Mediterranean Market. 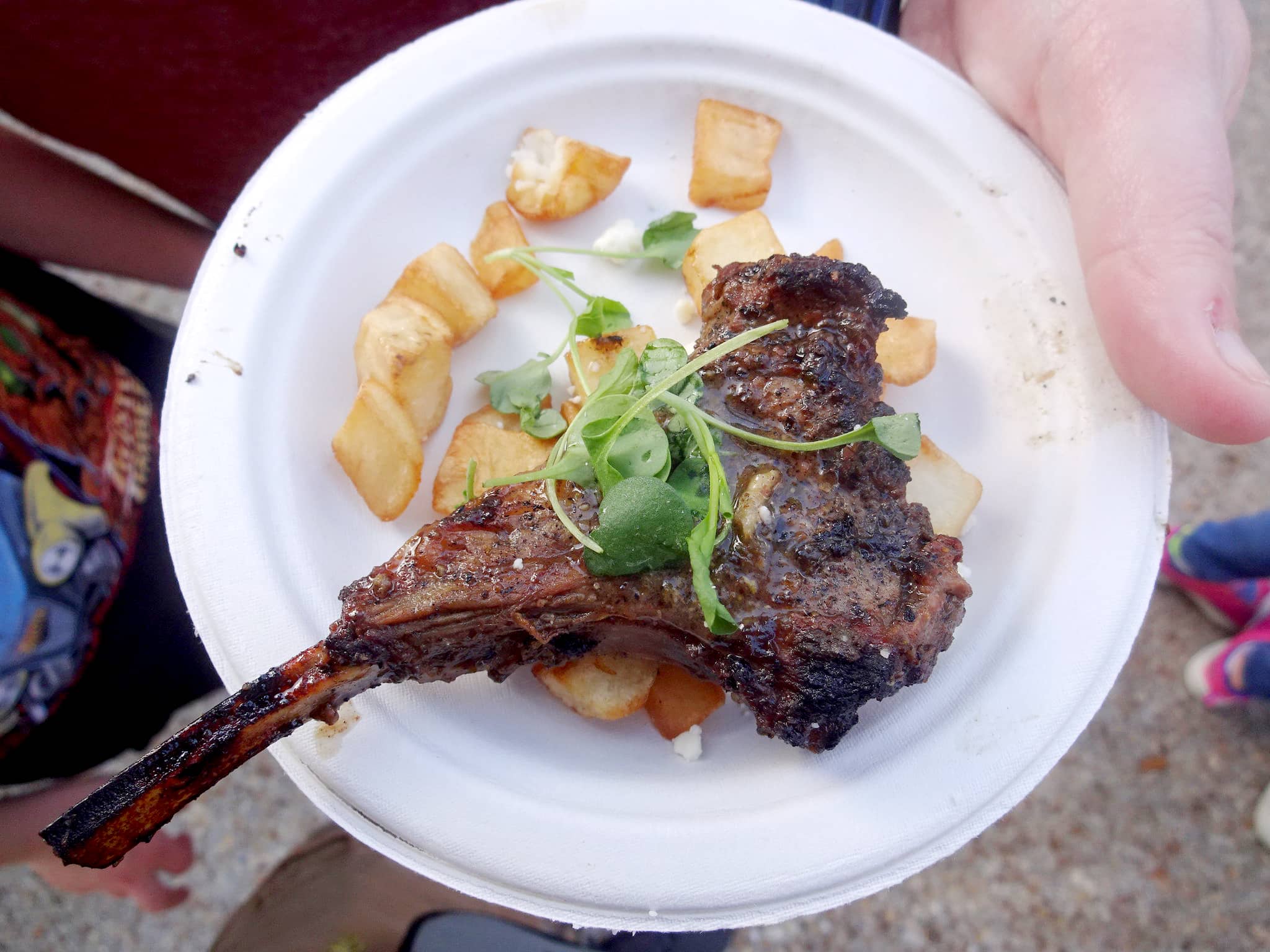 The Grilled Lamb Chop was the clear item of choice from this kiosk. The lamb here was a superior cut to that of the ribs, and the rub applied was a nice blend of Italian and Greek spices. The only downside to this dish was the boring cubed potatoes served alongside the classy lamb. I would have rather the chop served by itself or maybe a chunk of feta or couscous, since the potatoes didn’t add a thing to this dish.

Nearby was the Brazilian Market where we sampled one item. 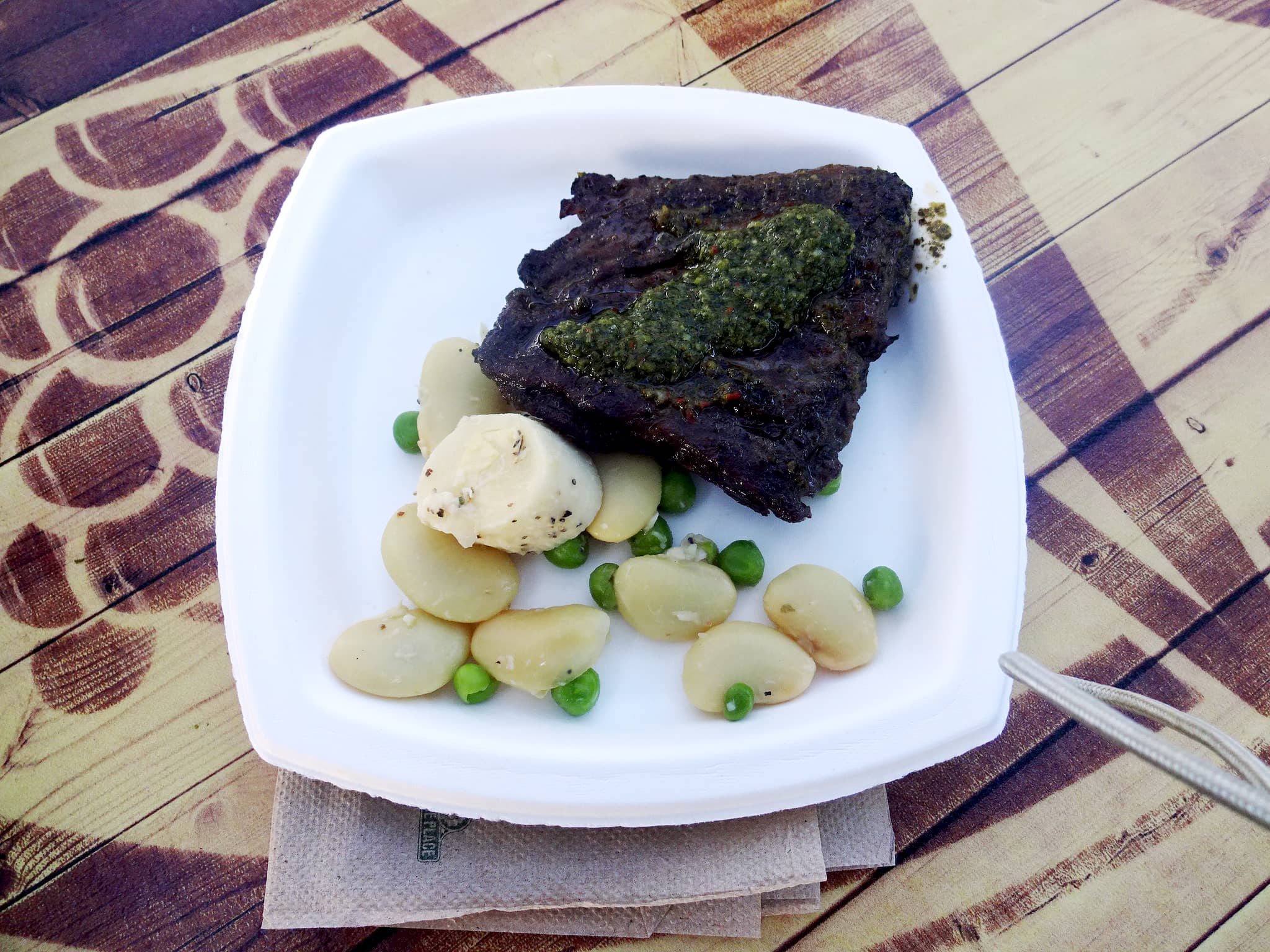 The Brazilian Picanha Steak was straight from your favorite churrascaria restaurant. The flank steak, which is typically a very tough and chewy cut, was fork tender and coated with a salty rub and topped with chimichurri that was near perfection. I wasn’t a fan of the butter beans served with the meat (I’m not a huge legume fan), but the meat more than made up for the undesirable side.

Further along the path was the Asian Market where we tasted two dishes. 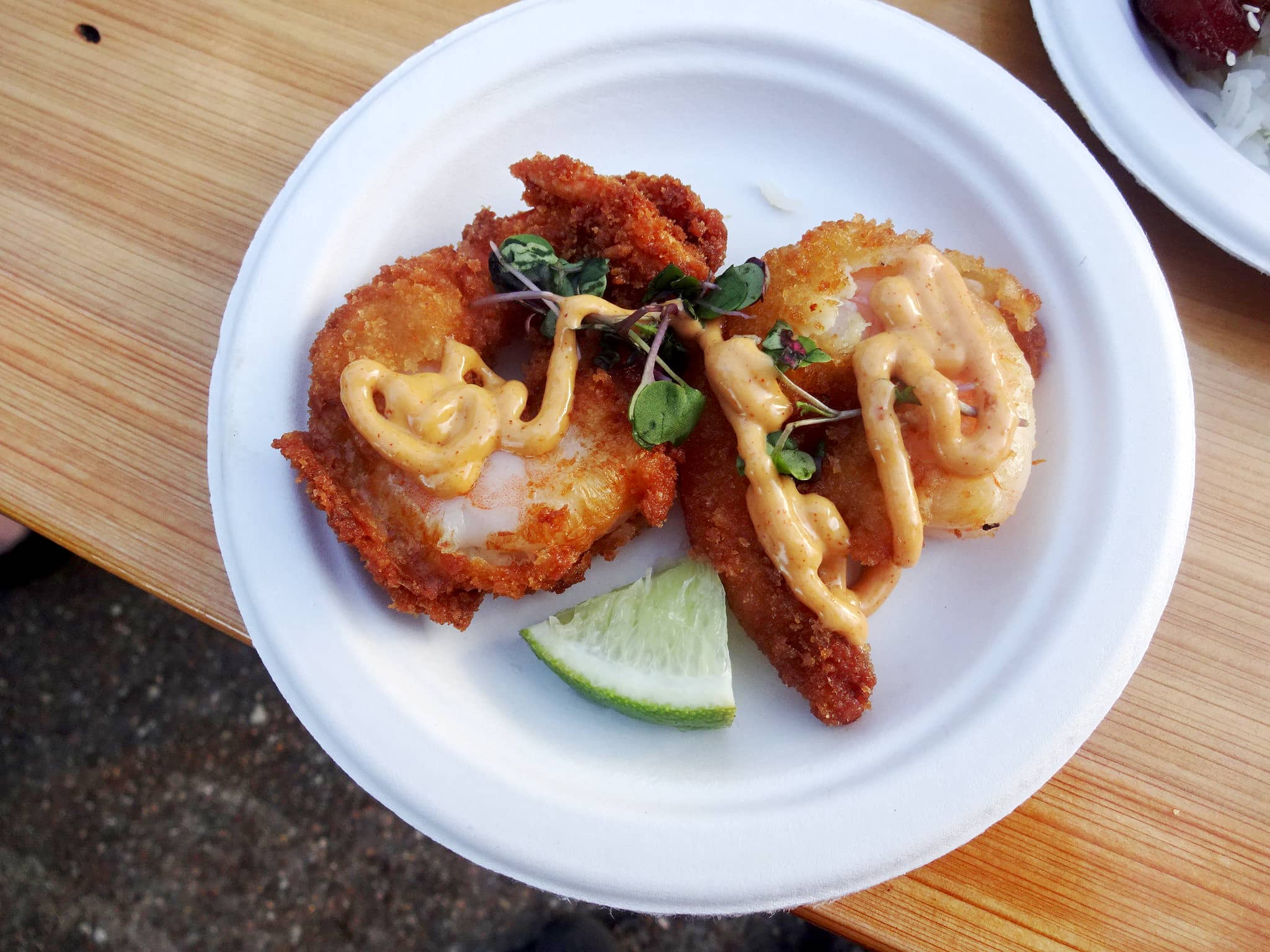 The Giant Panko Prawns were crispy and delicious with a sumptuous sea urchin aioli. My only complaint here is that I would have preferred some more aioli on the side. 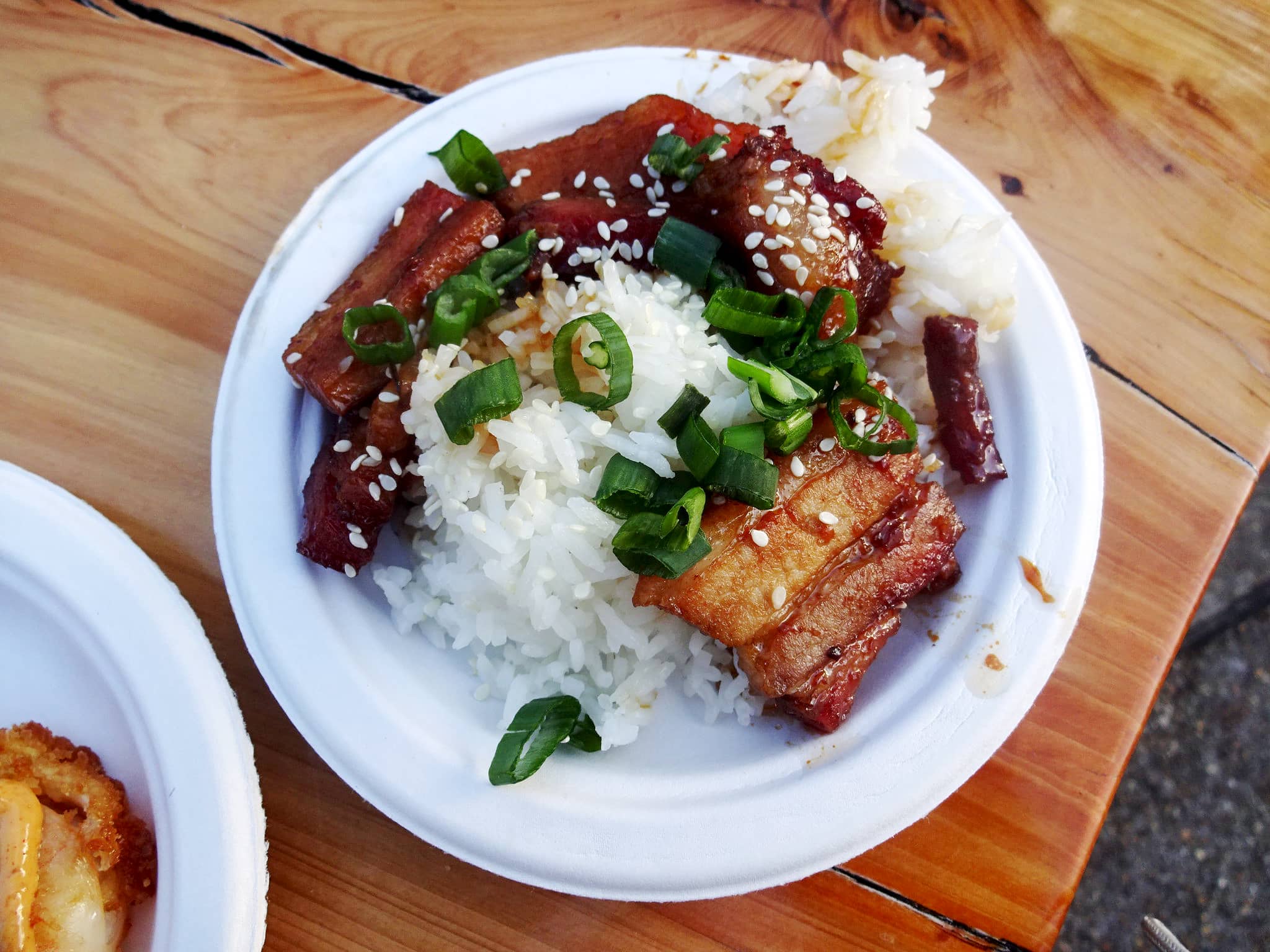 The Crispy Pork Belly Bites were amazing and served on sticky rice. The bites were incredibly tender and had a sweet and salty glaze to solidify the Asian flavor provide. The sticky rice served as a base was fine but needed a sauce (just a simple soy sauce packet would have been fine) or some extra glaze from the pork belly to give it some more flavor.

Across the path from the Asian Market was the Ireland Market.

We were hoping to try the Classic Mini Shepherd’s Pie, but by the time we made it to this stand, they were out of this item temporarily, and it was unclear when it would be available. 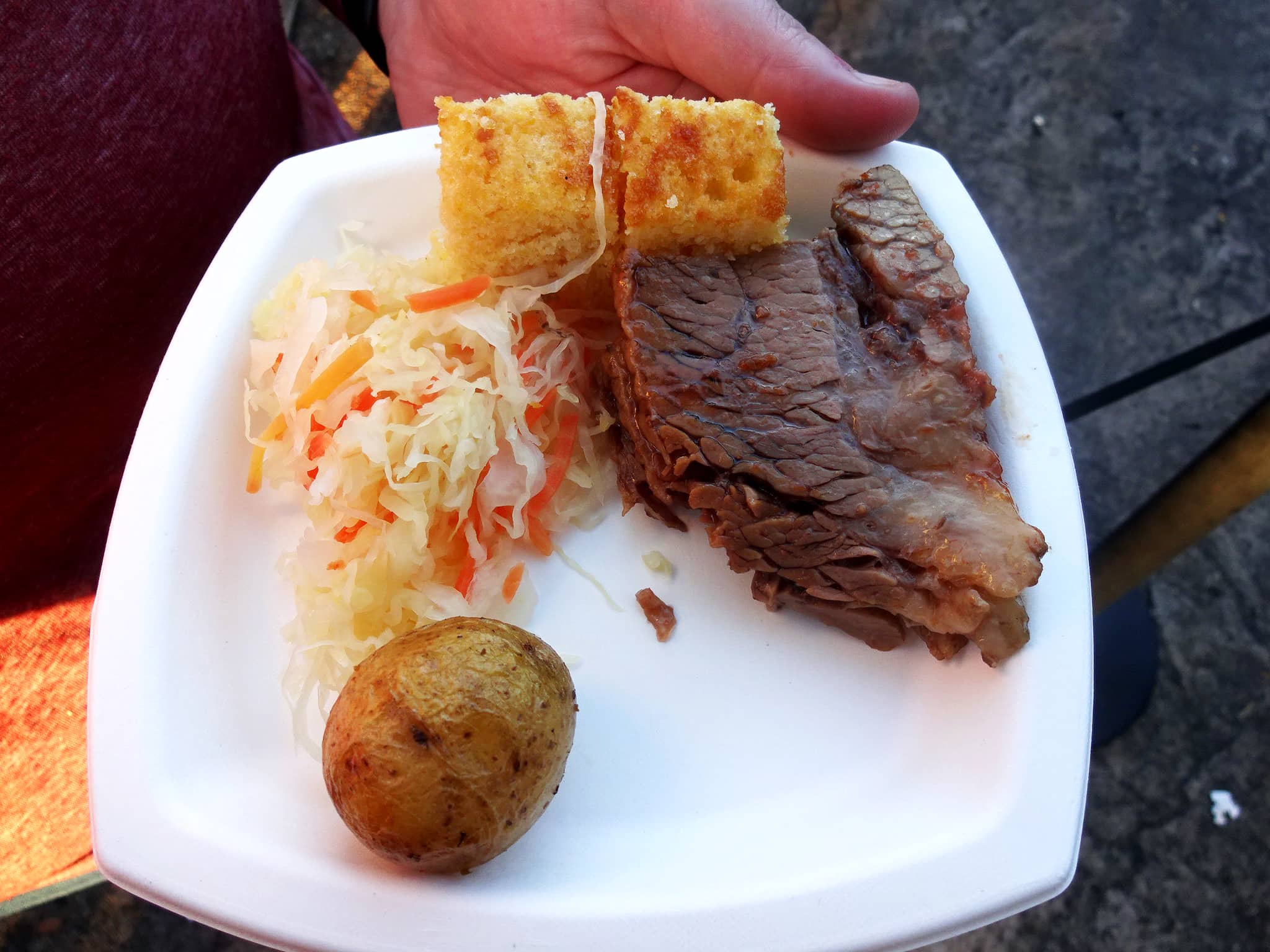 We did get the Glazed Corn Beef, which was served with a whiskey glaze, potatoes, cabbage, and a small piece of cornbread. The meat was very tender, but the glaze was a bit too sweet for me. Also, the cabbage here was more like sauerkraut than stewed cabbage you’d typically see served with corned beef. This wasn’t necessarily a bad dish, but I would have much rather tried the Shepherd’s Pie if it were available.

The next kiosk was the German Market, and our plan was to get either the Pretzel Bratwurst or Heritage Park Schnitzel Slider. However, both dishes were temporarily unavailable with no indication as to when they could be ordered. We ended up moving on to the Mexican Market, where we sampled two different items. 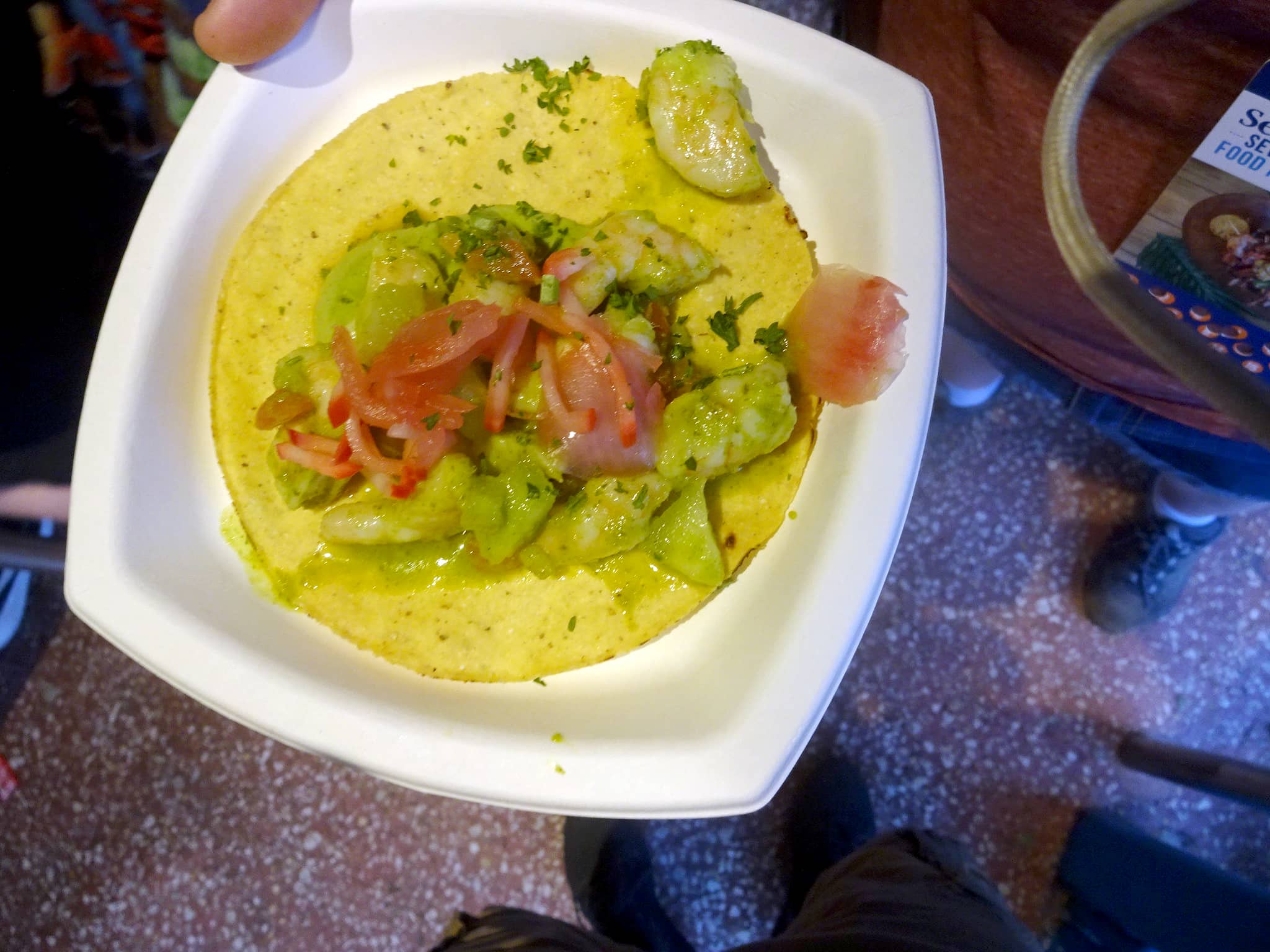 The Drunken Shrimp Tostada was served with a cooling cilantro avocado crema. There was a good portion of shrimp here with a pickled onion garnish to provide a bite to the otherwise neutral flavor profile. 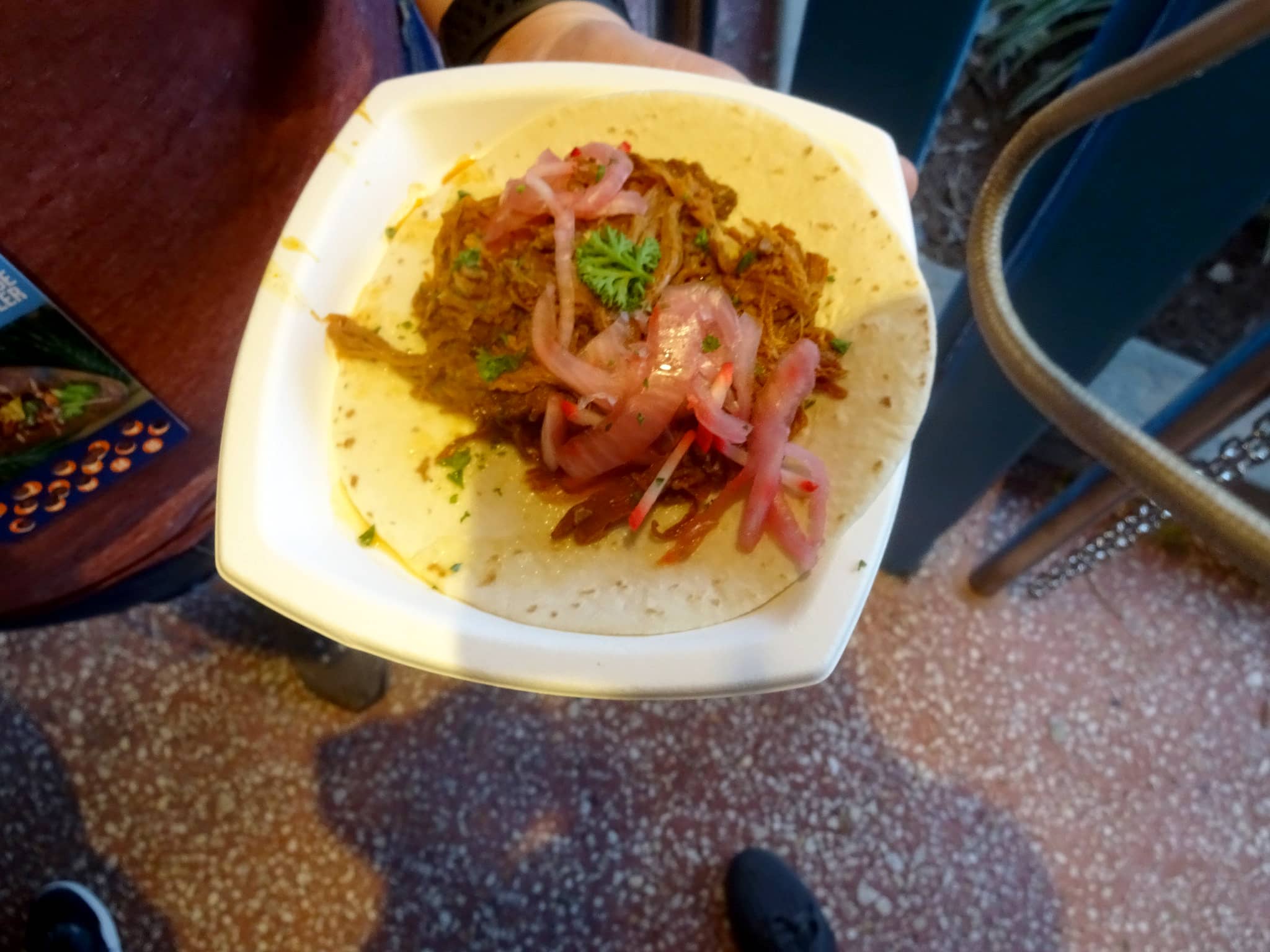 We also tried a Beef Barbacoa Taco to make up for the items that were unavailable earlier in the day. This taco was a pretty standard street taco with some pickled onions added for flair. The meat was quite flavorful and tender, but I was hoping for it to be a bit spicier. A dash of hot sauce would have kept this from being among the bottom tier of dishes we tried.

Our final stop of the night was the Italian Market. 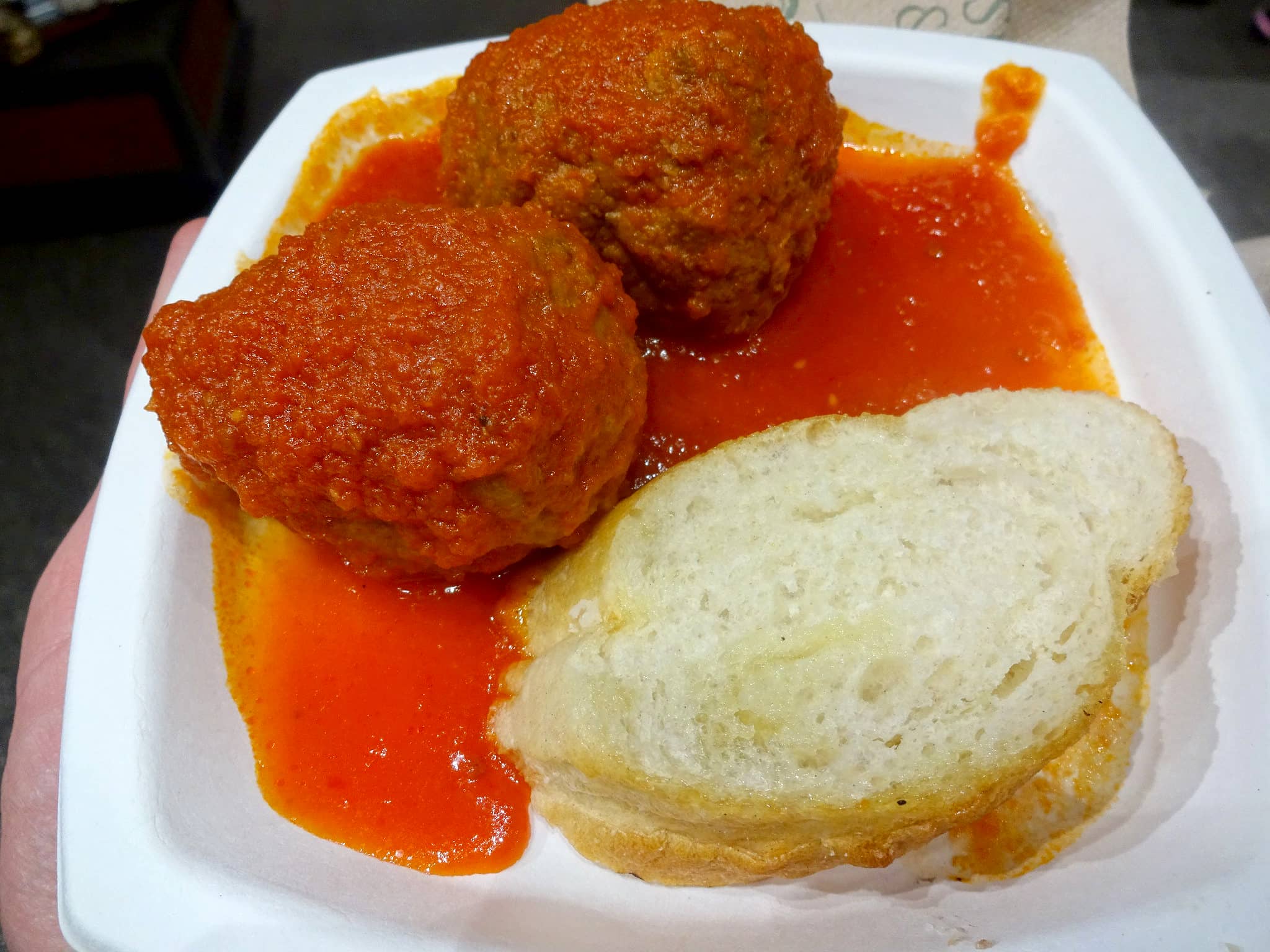 I saw a pre-plated version of the Palermo Fontina Cheese Meatballs, and they looked delicious. The meatballs weren’t quite as large as you might find in a traditional Italian restaurant, but they were bigger than most fresh and frozen meatballs from the supermarket. The sauce here is a very basic tomato sauce to allow the meatballs to shine, and the slice of bread helps to sop up any extra liquid.

With the 15 dishes we sampled, the three of us had plenty of food to get us through the afternoon and early evening. The variety and quality of the dishes is right up there with the best food festivals I have attended, including the industry’s best, Epcot's Food and Wine Festival. The crowds and lines we experienced demonstrate immense popularity in well-executed food festivals. SeaWorld is offering the Seven Seas Food Festival for the next two months, through May 8.

We wanted you to read this article before we make our newsletter pitch, unlike so many other websites. If you appreciate that - and our approach to covering theme park, travel, and entertainment news - please sign up for our free, three-times-a-week email newsletter. Thank you.

My top favorites are the pork belly, lamb chop,chocolate covered pretzel on a stick, and the watermelon vodka pouch drink.

Anthony Stice came on as the VP of F&B for SEAS two years ago. He did tons of work during Covid. Unfortunately he just left to go to Holland America because his background is in cruises, but these food festivals require a lot of planning, so we probably have to give him some of the credit. I hope they find a worthy replacement.

Really wish they would allow leftover punches to carry over to the next festival ...

I hope you left room for a dessert after that lot, Russell.

@jeremygary - I'm just glad they offer punch cards, because it allows you to get an excellent cross-section of the Festival at a pretty significant discount. The punch cards can be used throughout the festival, so locals can sample a few items over multiple visits during the nearly 3-month event. Allowing cards to bleed over to the next festival would be nice, but ultimately undermines the purpose and urgency of guests to visit and use samples during the current festival.