Tomorrowland
Boat Ride
Not enough votes yet to rank 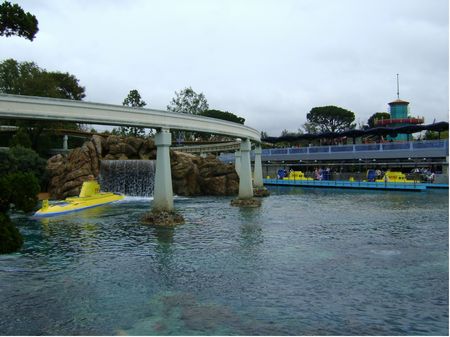 Disneyland's submarine ride to the North Pole and the lost continent of Atlantis opened in June 1959 before closing in September 1998. The attraction reopened in June 2007 with a Finding Nemo overlay, inspired by the Pixar movie.

The submarine ride uses Disneyland's largest show building, as all elements needed to be duplicated so that both sides of the submarine could see the same thing. Thanks to "sonar hydrophones" you can hear Nemo and friends talk as you ride underwater past reefs, through caverns and into the East Australian Current. The 15-minute ride also includes encounters with Bruce and the sharks, deep-sea anglerfish, whales, and an underwater volcano.

The Nemo overlay added new life to this attraction, but it's still an awkward experience getting in and out of the subs. CMs do a great job of keeping the lines moving, but most times the wait is longer than the ride is worth because of the tedious loading process.