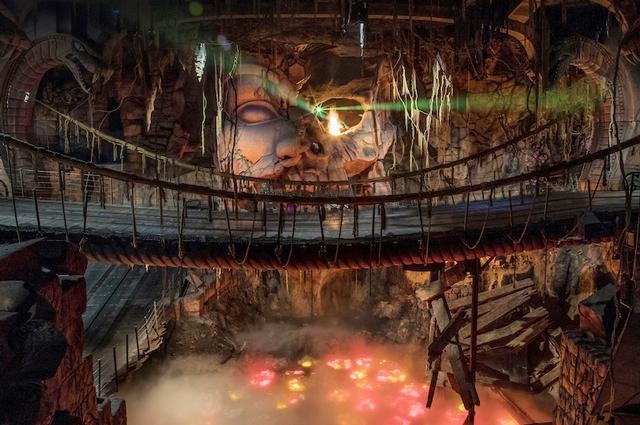 Indiana Jones Adventure: Temple of the Forbidden Eye is a dark ride attraction at Disneyland. It opened on March 3, 1995. Based on the Indiana Jones films, guests are taken on an adventure in modified military transport vehicles through an ancient Indian Temple with Indiana Jones. It was formerly sponsored by AT&T, where cards to translate symbols (Mara-glyphics) on the walls were handed out.

This ride has an intricately detailed queue taking explorers through much of the temple.

A nearly identical ride entitled Indiana Jones Adventure: Temple of the Crystal Skull is located at Tokyo DisneySea theme park in Tokyo, but takes you through a South American Temple with minor changes to the ride.

Before Rise of the Resistance, this is what I held as the top dog in theme park attractions. It's highly themed environment mixed with thrills and many innovative tricks pulled off by Disney Imagineering, makes for one of the best rides built. The half mile queue could be a walk through attraction itself. I always ride this whenever I go to Disneyland and I don't expect to stop that. Shame though the door effect doesn't work anymore...

It's a great ride, but it's incredibly frustrating that it still suffers from constant downtime and delays. I don't think I've ever had a "clean" run after dozens of rides over the past decade plus, and while the queue is the gold standard for all future line waiting experiences, it's incredibly frustrating for FP guests who still have to walk nearly a half mile to reach the load platform and wait more than 15-20 minutes to board because of the way CMs mesh the FP and standby lines.