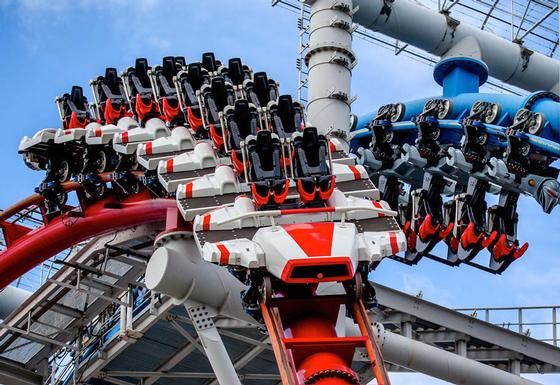 Battlestar Galactica are launched, dueling Vekoma coasters: "Human," a sit-down coaster, and "Cylon," an inverted. The ride closed at the end of July 2013 "for review" and remained closed until reopening in May 2015. It now features Viper-styled Human trains that seat two across, rather than the four-seat rows on the previous trains.

Battlestar Galactica opened with the park in early 2010, only to close a week later due to what was later revealed to be cracks in the seat-post supports on the Human side. The ride remained closed for 11 months before reopening with reinforced seats on both sides.

Despite several downgrades over the years -

halving seat counts on the coaster per launch,
launches no longer being done simultaneously (presumably another measure taken to increase ride safety by having only one coaster straining the entire system at a time),
the halt of souvenirs for what is basically a media property a decade old and forgotten by all but hardcore sci-fi fans,
and even the repainting of the rails on the Cylon half in a duller gray compared to the shiny bold blue of the original reboot's Cylons (granted it's mostly visual but... :( )

- this ride remains one of the highlights of Universal Studios Singapore.

There is no Single Rider Queue for either half of this attraction, though Crew Members will regularly exercise discretion and reorder the front of the queue to allow single riders to board slightly earlier in order to fill empty single seats. Queues for the ride are divided into two separate coasters.

Pre-flight on both sides consists mainly of static displays themed accordingly based on which side of the coaster you're in - Battlestar hangar for the Humans, and techno-organic wall panelling and standing modern-style Cylons for the Cylons. Brief looping mood videos from original actors from the show also sets the mood (in English without subs of any sort). A safety video is also played occasionally as well as at boarding points in both English and Chinese (spoken on one language and subtitled on another, alternating)

The Human coaster is the less convoluted of the two coasters - at no point does the coaster invert, and there is a floor on the coaster cars, though in practice you'd have to dangerously close to being too tall to ride before your feet touch the flooring. There is nothing enclosing the sides though - leaving only the harness to keep you tightly in your seat.

The Cylon coaster is a suspended coaster, with the seats suspended beneath the track instead. The coaster could be considered more wild, with actual inversions and loops with points where it may even feel like the coaster is trying to toss you right out (even if the seat and restraints work every well to ensure that is never something that occurs ever)

On a peak day, expect wait times of 45-90 minutes on each normal queue of this coaster for a ride that lasts two minutes at most, with queues halved severely on an Express pass to maybe 2-10 minutes.

To prevent undue accidents involving loose articles inadvertently hitting other riders or passers-by, crew members regularly scan for such items and direct them to be stored in nearby free lockers with other bags. Depending on the fit of footwear and glasses, you may also be asked to temporarily deposit such items in racks near each coaster while riding.