The Cincinnati-area tradition, gone for more than a decade, shows theme park fans that a cold-weather park can deliver holiday cheer, too.

It was a tradition: WinterFest at Kings Island. Approaching the park at dusk, from I-71 you could see the Eiffel Tower replica draped with glittering white lights altering the architectural nod to France -- just for the season -- into a giant American Christmas tree. It stood tall and star-topped, visible for miles in every direction, proclaiming that the holiday season was upon us. Once inside, the park was transformed from a place of cotton candy and roller coasters to a holiday village where ice skating and (for me) funnel cakes topped the attractions.

You could get a darn good turkey dinner at the WinterFest Haus and it was accompanied by a holiday show that left no question about the season. Truth be told, the show was pretty corny -- usually set under the premise of young people purchasing a Christmas tree or attending the "Snowball Dance" in their quaint little town or some such contrivance. However, it provided many opportunities for talented young performers to sing Christmas carols while bundled up and snuggly as fake snow drifted down upon them. As much as I resisted outwardly, inside I was eating it up.

The only ride open was the Grand Carousel, which for some reason was how we always ended our nights at WinterFest. It was dreamlike riding round, the rest of the park a blur of night and lights. I took a date there and we rode that carousel till the park closed. This year, that "date" and I will celebrate our 12th anniversary. 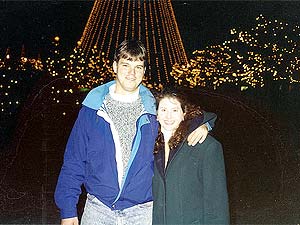 I tell you all this because WinterFest was a tradition that meant something to a lot of people in our region. Even so, the cost of opening the park for a few hours a night for a month and half was not profitable and the tradition ended. And it was gone for years. I had a photo on my desk at work of my husband and me on that special date. That photo sparked many a conversation similar to this: "Oh my gosh, is that from WinterFest? I remember WinterFest..." And we would reminisce about our fun times at the holiday event gone by.

The good news is, this year Kings Island is bringing back the tradition, which promises to be bigger, with more attractions than ever. I don't know about the funnel cakes or the Grand Carousel, but there will still be the holiday lights, the ice skating, the turkey dinner at the WinterFest Haus and the holiday show to accompany it. In addition, however, will be a nightly Christmas Parade; train rides on the White Christmas Express; Holiday Illuminations, an outdoor light show on Swan Lake; Santa's Christmastown, where kids can share their secret holiday wishes with Santa; and the Nickelodeon Holiday Tree Lot where children can meet their favorite Nickelodeon characters and have photos taken with them.

General admission (if available, call ahead, this event may sell out) is $24.99. 2006 Season Pass holders can purchase tickets for $16.99. WinterFest parking is offered at a reduced price of $5.