Recently, I had the opportunity to visit world-famous Chimelong Paradise theme park, in beautiful Guangzhou, China. I kid. I'd never heard of it either.

In fact, this theme park is only ten minutes from where I live, and it's right across the street from a subway stop, so it's very convenient.

Guangzhou's weather is similar to Orlando's, in that you can expect 9 months of Summer, and your safest bet is to pack an umbrella, because it's going to rain. Thankfully, the rains came early, and had concluded by 11am.

Upon entering the park, you're greeted by "Drop Coaster", which from my recollection, is an exact copy of Busch Gardens Tampa's ShieKra. 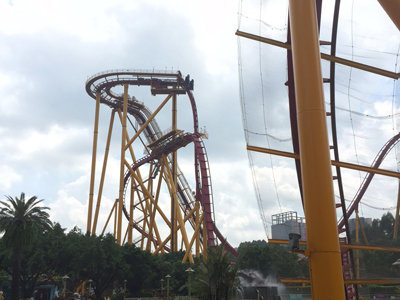 The wait time listed was 60 minutes, but from the time I got in line, until exiting the ride, approximately 90 minutes had passed, though this easily the longest line in the park, most likely because of its proximity to the park's entrance.

Before climbing the stairs to the loading area, you are required to take off flip flops, glasses and sunglasses, hats, backpacks, etc. You put all of your loose belongings into what is best described as a TSA security tray, and you're given a rubber wristband with a letter and number, which you use to pick up your stuff later. I thought that was really smart, and it sure beats paying for a locker, such as at Sea World.

The park has your standard carnival type rides, including bumper cars (or rather, boats), spinners, and the like. Midway games. Lousy food, at least at Happy Restaurant. I wasn't too happy.

I was quite surprised to see that they had the animated movie Rio playing in their 4D Theatre. 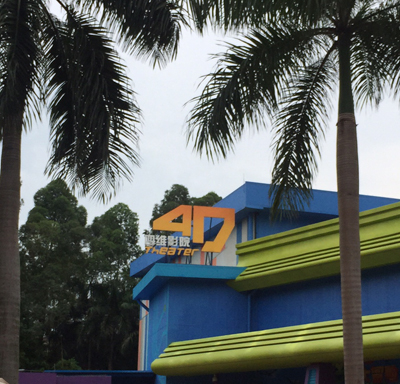 This ended up being a 15-minute condensed version of the first Rio movie, showing key scenes, while incorporating rumbling and shaking seats, water and air spray mechanisms, and 3D glasses while you watched. It was fine. I don't know what I was expecting, but the whole time I kept wondering to myself "how did they get the rights to Rio?". But this was fun for the kids, and the audio was in Mandarin. No subtitles, but as I'd already seen the movie, it didn't matter.

Yes, the audio in the park is all Mandarin, which I find odd because Guangzhou's also known as "Canton", birthplace of the Cantonese dialect that dominates Hong Kong.

All the way at the back of the park were two more roller coasters, including "10 Inversion Coaster". 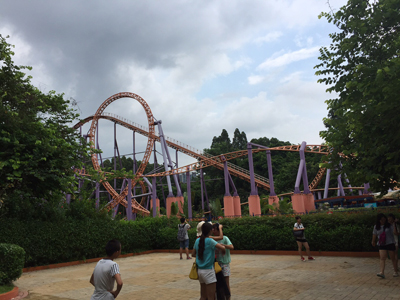 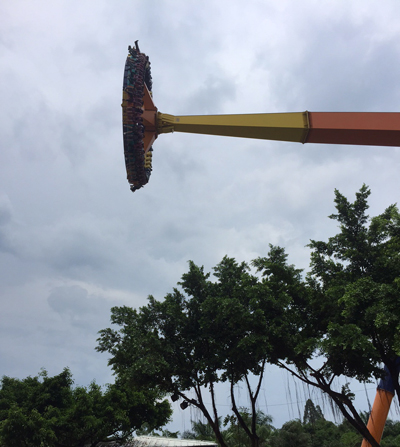 I mean, maybe one ride could be called "Kung Pow!" or another "The Emperor" or maybe "The Dragon". Something. Anything. Gosh!

10 Inversion Roller Coaster was exactly that. Ten inversions. Unfortunately it was shaky and after knocking my head on the head pads going through the first loop, I was just as focused on how not to give myself a headache, as I was with counting the inversions and enjoying the ride. Where is Bolliger? Where is Mabillard? Meh.

But yes, it has ten inversions, including 4...umm...corkscrews? Barrel rolls? Lol. In a row, at one point. If it were a smooth ride, I'd have done it 3 or 4 times, and the wait time was all of 10 minutes.

The guide map says this roller coaster has the most inversions in the world, but checking Wikipedia for confirmation, The Smiler at Alton Towers has more....though it apparently injured 5 people and is closed the rest of 2015.

All in all, it was just okay. It's not a park I imagine I'll ever go to again, though they do have a water park next door that I often see commercials for on the subway tv monitors.

If you're looking for great theming and an immersive atmosphere, this is not the place for you. However, if you happen to be in Guangzhou, and you're bored, check it out!

That's all I got for y'all. I considered trying to write a really good, thorough review, but I didn't really have a lot of feeling for this park, and ended up just wanting to share a little.

If this stuff was made in China it will all be rusted and rotted out in less than 3 years... Just like most products made there...hahahahaa...

Thanks for writing the TR...

Great article. Although I'll probably never visit this park it's fun to read about other people's experiences. I'm headed to Hong Kong Disney (my 13th and last Disney park) in September and wonder how the Chinese experience compares to the French, Japanese, and Angelenos? Are you excited for Shanghai? I will definitely be headed there when it opens.

IP rights in China?They couldn't care less. They steal anything they can. LOL

I am very excited for Shanghai Disneyland, and my wife and I are going to try relatively hard to be there on opening day. That'd be a real treat, even if I have to nab my ticket on the black market.

I'm only about 90 minutes from Hong Kong, and I plan to wait until Iron Man Experience before I go for a third time, because it is quite small. Then again, it's freaking DISNEYLAND, and who am I kidding? I'd go for any reason, at any time.

This theme park in 4 words:

The 10 inversion coaster is a replica of Colossus (Thorpe Park, UK) which is in turn an adaption of Monte Makaya in Brazil (although the latter has 8, not 10 inversions, the former has 10). All three built by Intamin.

I love Colossus. I'm usually in extactic laughter by inversion 6.