Back in late August this year (2015), I took my second visit to Sea World San Diego. Despite living in Orange County, I had not visited the park since 2006 due to high ticket prices. When I first walked in, I was surprisingly impressed by the Explorer's Reef exhibit. It was nicely themed and it was fun to touch the fish. After that I checked out the underwater Shamu exhibit. That was really cool, as you got to be really up close with the orcas. These two exhibits both pleasantly surprised me and gave me high expectations for the rest of the park. Once the park opened, I headed straight for Journey to Atlantis (in hindsight I should've listened to disneyversal's advice about riding Shipwreck Rapids first and I was planning to ride it first, but I have a horribly bad habit of riding the ride closest to the entrance). On the way to JTA, I saw Animal Connections. Although I did not enter, I was really unimpressed by its theming. Explorer's Reef and the Shamus made me feel like I was at a well themed amusement park and Animal Connections made me feel like I was my a local zoo. 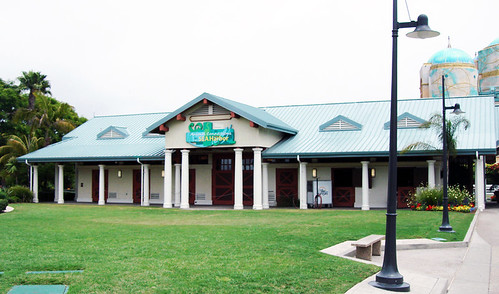 I love San Diego's Manta. It's very different than Orlando's, but a delight in its own right.

This post reminds me that I really need to get back down to SeaWorld some time. I haven't been since the Explorer's Reef opening (the last new attraction to open at the park).

I've never been to a sea world park, but I hope to go. Was it crowded? I've heard that the park gets a lot of bad press.

Great trip report, Juan. Having just visited the park for the first time in a few years last month, I definitely agree with some of it and disagree with some. SeaWorld has some things that they do really well, but there are definitely areas that could use improvement if they want to justify charging the price that they do. Manta is great, Journey to Atlantis is great, Shipwreck Rapids is great, and some of their shows and exhibits are pretty good, but unless you want to see every show it is really a half-day park that is probably only worth $50-60. I wouldn't go as far as saying don't go to SeaWorld San Diego, but I would say that it is more of a one-time park (or once per major addition...I've only made 4 visits in the past 15 years) and that if you've visited the other SeaWorld parks it probably isn't worth adding to a So Cal trip unless you'll be down in San Diego anyway.

I have an annual pass, but never thought to write a trip report. JTA is so amazing, I rode it over and over again. The good thing about the negative press is that there are very few lines. I still feel that after Universal and Disney, they make the best theme parks.