January 19, 2006, 2:12 PM · Carlsbad, Calif. -- Legoland plans to build another theme park, probably in North America, within the next three to five years, the CEO of Merlin Entertainments Group announced Thursday.

Nick Varney said that Legoland is "actively engaged" in seeking partners to develop another park, which would be the company's fifth worldwide. Merlin Entertainments acquired controlling interest in Legoland in 2005, with funding from the private investment firm Blackstone Group. Blackstone holds 50 percent of the Universal Orlando resort, but Varney told Theme Park Insider that Blackstone's involvement would not move Orlando to the head of the list of potential sites for the next Legoland.

"Blackstone is the passive investor in Orlando," Varney said in response to TPI's question. "GE [NBC Universal owner General Electric] makes the decisions there." Varney would not rule out Orlando as a possible site, however.

"We have three parks in Europe. Looking to the future, in the blue sky, I could see three parks in North America, too. With a Legoland here in Southern California, it does not take a genius to see the Midwest and the East Coast as potential new sites," Varney said.

Varney also left open the possibility of working with another theme park company in developing the new park.

"We have a pretty strong track record in working in partnership," Varney said. "We have a SeaLife [aquarium] at Disneyland Paris Resort, and we are the only company to have partnered with Disney on an attraction in that way."

"We don't see it as a trench-defined battle," he continued. "If someone else has a complementary attraction, we'd be open to working with them."

"You can still get the same sort of [attendance] numbers [with seasonal parks]. Legoland Denmark is a case in point. It does the same sort of numbers as Legoland California, even thought it is only open only part of the year."

Varney said that the company's goal is to develop its Legoland parks as "mini Disney Worlds," destination resorts attracting visitors over several days, rather than just destinations for local day-trippers. As a result, Varney suggested that Merlin might build new installations of its SeaLife and Dungeon amusements next to Legolands, as well as working with local governments and developers to encourage more tourist development around the parks. 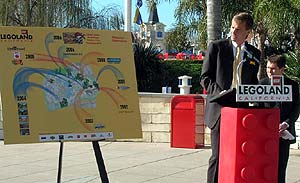 Varney spoke to TPI and other reporters after a press conference to unveil "Pirate Shores," a $10-million new themed land in Legoland California. The land, to be built between the Flight Squadron attraction and Garden Green restaurant, will be anchored by "Splash Battle," an interactive aquatic shoot-'em-up, where riders cruise through pirate-infested waters, in boats armed with their own water cannons.

The area will also feature "Treasure Falls," a 12-foot-drop mini-flume ride that shows "what pirates do on their vacation," according to Legoland President and General Manager John Jakobsen. Two water play areas will round out the new land. "Squabbies Deck" is aimed at younger visitors, while "Soak-N-Sail" will provide 60 water elements for older kids.

Jakobsen declined to provide a specific opening date for Pirates Shores, announcing only that the land would debut sometime this summer. Construction has not yet begun on the site, as the Carlsbad city planning commission just gave its approval on Wednesday night.

In other news, Jakobsen confirmed that a new "Spellbreaker 4-D" movie will debut in May, alternating with the current Racers 4-D movie. (This corrects the initial report that Spellbreaker would replace Racers.)

Anthony Murphy
January 19, 2006 at 3:46 PM · I think Orlando would be a big mistake because of all the Theme Parks down there. However, while writing this, I realize that this site would have the same competition as it does in California, but I feel that Disney rules that area and most people go to Orlando for Disney World, maybe Universal. I still think it is a bad idea because Disney World can cater to children much more effectivly that DL. I am not sure, but I am guessing Legoland is for younger kids. Also, I just thought of this: There is a giant Lego Store in Downtown Disney?!? How is that going to work out?

Robert Niles
January 19, 2006 at 4:34 PM · In my opinion, Legoland is a far, far more kid-friendly park than anything offered by Disney or Universal. A Legoland Orlando, properly marketed, within a few years could become a major player in the Central Florida theme park market. I would much rather take my kids, ages 8 and 5, to Legoland than a Magic Kingdom. And they'd rather go, too. Personally, I think a Legoland Orlando as a third gate for Universal Orlando makes great sense for Universal, for Blackstone and for Merlin. But that's NBC Universal's call. Do they want to go kid-friendly, or would that hurt a more teen and young adult image that they might instead wish to present? I don't know.

That said, I'm not sure how well a Legoland would scale to five million visitors. Anything more than two or three million would seem too much for these parks, I suspect. The attractions are too small-scale for a much larger crowd.

More for the rumor mill: Mall of America just scuttled its contract with Cedar Fair for the former Camp Snoopy. Cleveland has been very aggressive about developing tourist attractions. If Six Flags is looking to sell locations, might Merlin be interested in buying? Much here to consider....

Derek Potter
January 20, 2006 at 6:55 AM · Cleveland could be a contender. There are a couple of things that could stand in the way there. First is the combination of geography saturation of the market. Cleveland isn't Orlando, so there isn't a wide tourist base for Cedar Point, Kennywood, Geauga Lake, Waldameer Park, and then Legoland. True...all not the biggest draws in the country, but draws nonethtless. I'm not sure what kind of calender Legoland has, but they would only be open 6 months out of the year if totally outdoors. Combine those two factors, and it may benefit Legoland to go a little further south. Could they make it in Cleveland...absolutely. Could they thrive in Orlando....possibly, but another place comes to mind.

Myrtle Beach, SC. Financing for the Hard Rock Park has come through, and construction will be starting soon. It probably will be a nice park, but nowhere near enough to merit being the only theme park in the area. I would think that Legoland would take a look at that area. Millions of people come each year, with no theme park to speak of yet. I still say that Myrtle Beach is a goldmine for park developers as long as they make a good product. Legoland could make a killing bringing in all those families that I see down there every year.

Pete Brecht
January 20, 2006 at 8:17 AM · I wonder if they'll use their site-search info from last time (when they built the California site) or if they'll start from scratch. Last time the runner-up was Prince William County, Virginia, which is an outer suburb of Washington, DC.

Robert Niles
January 20, 2006 at 9:13 AM · Varney said that the previous Lego research would provide the starting point for this search. I would think Prince William County would be a strong candidate.