August 23, 2006, 11:34 AM · Busch Gardens Europe has announced Griffon, a 205-ft. B&M dive machine with two vertical drops, a water splash and not one, but two, Immelmans. To make the ride even better, the trains are floorless so that your legs dangle helplessly during the two vertical drops. This ride will be open to the public in Spring of 2007. 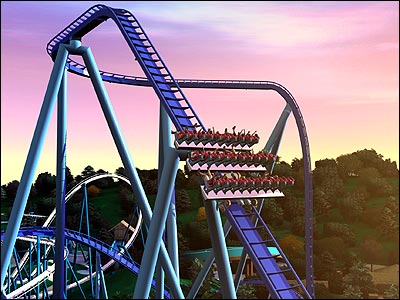 Editor's note: Here are excerpts from the press release:

Teased since early July with park billboards touting "Like Nothing Else in the World," Busch Gardens Europe took the plunge and unveiled its latest steel marvel, Griffon, the world's tallest and only floorless dive coaster. Currently under construction, this diving, driving force in roller coaster engineering will debut at Busch Gardens late spring 2007.

Griffon will send riders through an extraordinary journey 205 feet up and 90 degrees straight down at more than 70 mph – and that’s just the beginning. The name Griffon evokes the power and speed of a mythical beast that is part eagle and part lion. The ride twists, turns and plunges – giving riders a breathtaking adventure unlike any coaster experience in the world.

Griffon will incorporate two Immelman loops (a simultaneous loop and roll, the name of which was derived from the World War I German flying ace who invented the tactical maneuver). The world’s first floorless dive coaster also incorporates a second 130-foot dive and one water feature with spectacular viewing platforms where ride watchers can share in the thrills. Each floorless coaster car will consist of three, 10-person wide rows.

The roller coaster is being constructed by Bolliger & Mabillard of Monthey, Switzerland on the former LeMans Raceway site in the French section of the Williamsburg theme park. Griffon is the fifth member of the park’s family of renowned coasters.

Construction began July 6, 2006. The most recent roller coaster to debut at Busch Gardens was Apollo’s Chariot in 1999.

youngstud
August 23, 2006 at 2:41 PM · not impressed, looks like the train doesnt match the track color at all either

Erik Yates
August 23, 2006 at 2:56 PM · I think those are concept pics. If you like Sheikra, then it seems destined that you'll love this one. This is going to be the "only" floorless dive machine. That kind of squashes the rumor that Sheikra will get floorless cars anytime soon. I hope its really fun, two immelmanns....better than one.
Lets hope it competes with Mystery Mine at Dollywood opening soon as well.

Russell Meyer
August 23, 2006 at 4:56 PM · I assumed Mr. Saunders would not be impressed with the announcement, but from what I could tell from those gathered at the press announcement today, most were extremely excited about this new coaster. It's hard to believe that BGE has not added a coaster since 1999, and in that time, 2 roller coasters have departed (Drachen Fire and Wild Maus). The park's collection of coasters is still among the top 10 parks in the world, and the addition of Griffon will only increase its standing.

Everyone is going to want to draw comparisons to SheiKra, and rightfully so since this coaster is very similar. However, the designers have made enough changes to the coaster to differentiate it from SheiKra with a second Immelman and wider, floorless trains. Griffon is definitely not a clone like we've seen from some other park chains (Six Flags and Paramount).

Walking around the park today, I was trying to visualize what a 205' coaster in the middle of the park would look like, and all I could think is that it would dominate the landscape. Where Griffon's drop will be is topographically one of the highest spots in the park, which means the top of this coaster will be seen from just about anywhere in the park. Not only that, but riders will look down over Alpengeist, no slouch itself at 190 feet, as they round the first turn before the ominious first drop.

I think the most significant detail revealed about Griffon is the trains. With floorless trains 10 seats wide, riders sitting in the 2 seats on either end of the front row will be wide open with nothing in front of you, nothing above you and nothing below you, not even the track. Griffon will offer the closest experience to flight we've seen in a coaster since X and Eejanaika (the new 4-D coaster at Fuji Q Highland). The outside seats on SheiKra are pretty amazing, and I'm just salivating to think what the outside seats will be like on Griffon. The only problem will be trying to manage the queue to get people on and off a coaster with such wide rows. Theme park guests have a hard enough time counting to 4. I can only imagine how difficult it will be to force people to fill in every seat in every row.

Am I completely satisfied with Griffon? I can't really say since so many details were already known about this coaster before the announcement that it was a bit of a letdown to find out there wasn't much of anything that we didn't already know about Griffon. The coaster does bring a MAJOR attraction to a land in desparate need of one. Guests frequently just walked right through France just to get to their next destination. Now guests have a destimation in France. However, I'm a bit dissapointed that neither of the drops go through a tunnel or underground, a feature that was a staple of the three previous dive machines. The first drop does go under a pedestrian bridge, but other than that, both drops are wide open. I'm also a bit saddened that two Immelmans are the best the minds at B&M could come up with for this coaster. I realize rolls and corkscrews are pretty much out of the question for trains so wide, but a dive loop or a straight loop would have further separated Griffon from SheiKra. I am also a bit concerned that the park has eiliminated two family attractions (Wild Maus and LeMans Raceway) in favor of a huge coaster and a massive dark ride. The park still feels they have a strong collection of rides for all ages, but I would contest that BGE could use an infusion of smaller, well-themed flat rides targeted at the whole family.

As BGE management have said, this new coaster will not come close to breaking any height or speed records, but having the tallest and fastest coaster is not what they're aiming at. They want to have the "BEST" coaster, and Griffon is likely to be near the top of "best coaster" lists for years to come.

For those who are curious, the construction site is pretty difficult to view now since they have close the skyride. The skyride will remain closed through the rest of the 2006 season. For the best glimpses of the construction site, guests can ride Loch Ness Monster and Alpengeist to get the best view of what's going on. Today, they were in the process of driving piles and digging pits for footers, which would mean that a crane and track are probably still about a month away from showing up at the site.

Russell Meyer
August 23, 2006 at 6:31 PM · Actually Ryan, according to the most accurate and scientific poll conducted each year, SheiKra was ranked the #10 steel coaster in its first year, the highest debut of any steel coaster built in 2005 (better than both Kingda Ka and Dragster). To be ranked so high in the first year is actually quite an accomplishment on this particular poll.

Check it out for yourself...Steel Coaster Poll

Adriel Tjokrosaputro
August 24, 2006 at 3:06 AM · I think this coaster will be great. Much better than SheiKra. I think the 10 person-per-row system is good. High capacity so the line won't be too long. Floorless dive coaster... Great idea too. Imagine you see nothing below you except the track.

Jason Jackson
August 24, 2006 at 9:21 AM · Ryan, you must be reading that poll with your CP Rose Colored Glasses, because TTD was not at the top.

Erik Yates
August 24, 2006 at 2:18 PM · Regardless of whether or not Sheikra has won a lot of awards as of yet, it still pulls in the visitors. It still operates on a regular schedule without a lot of complications. Can the same be said about TTD or Kingda Ka? A resounding no comes to my mind. Therefore, Sheikra serves its purpose, brings people into the park and keeps them screaming for more. Griffon will do the same.

Xerox Copier
August 24, 2006 at 3:22 PM · Looking forward to Griffon ... love the theme. Never rode the "dreaded" Drachen Fire, so all my BGE coaster experiences have been top notch.

Busch is obviously a top park and a major contender in the biz ... so I'm sure Griffon will be a great ride that will be enjoyable year after year. After several years of season passes, I still love the BGE coasters and still can't pick a fave between AC and Alpie -- so great in their different ways.

Anyway, nobody needs me to say how good Griffon will probably be. Any park that can inspire the kind of singleminded devotion to its every move, every nuance, and EVERY SINGLE discussion thread as BGE does at TPI has got to be excellent. Can't imagine anyone getting that excited about (CF)PKD, for good or ill. You've gotta be a major factor or nobody would bother criticizing you at all, much less your every move.

youngstud
August 25, 2006 at 10:24 AM · go to coasterbuzz.com and you will see that there is not too much convo about BGE's new ride but people are totally excited about what CP's new ride will be. BGE is left in the dark cuz its a dull park but CP gets so much attention cuz it's more than a park with the best coasters in the world, its a world class resort getaway. CP, here i come in '07, watch out.....

Erik Yates
August 25, 2006 at 1:49 PM · Fine, we get it, you like CP. But there are other people other than CP fans, and there are other websites than those devoted almost entirely to CP. In that world outside of yours, we are all very excited about Griffon, as we were all excited about Sheikra. The fact that you are not excited about it does not dampen our spirits any. So have fun....thats one less person in a line that will be huge.

I no longer reside in VA, but when I return to visit, I will make special plans to visit my favorite park to view the new attraction.

Chris P.
August 25, 2006 at 2:11 PM · "go to coasterbuzz.com and you will see that there is not too much convo about BGE's new ride but people are totally excited about what CP's new ride will be. BGE is left in the dark cuz its a dull park but CP gets so much attention cuz it's more than a park with the best coasters in the world, its a world class resort getaway. CP, here i come in '07, watch out....."- ryan saunders

And what the hell is your point exactly?

For someone who lives in VA, he has zero respect for other's opinions.

scott sorensen
August 25, 2006 at 9:33 PM · Say Ryan,
I went to coasterbuzz.com like you suggested. It had a nice write up about Griffon. Actually, it didn't have much to say about CP. Oh yeah, it said Ryan's a loser.