Of course, Disneyland's success encouraged many others to build or develop their attractions into theme parks, so the day also ought to be considered the birthday of the modern theme park industry as well.

So slice up some chocolate fudge cake and celebrate the theme park way -- by waiting in your favorite queue. ;-) Grocery stores or the local DMV will do if you can't get to a park, I suppose....

I'll celebrate by offering you the earliest photo I have of me at Disneyland: 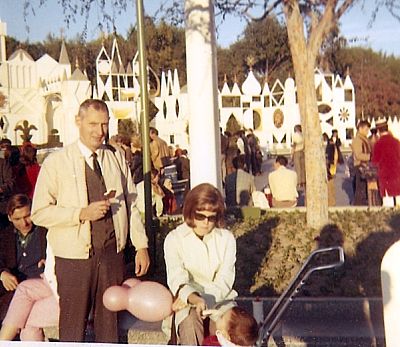 That's me in the stroller, sucking down an ice cream, Mickey head balloon in hand.

And here I am a few years later, tricked out in my best Disneyland garb: 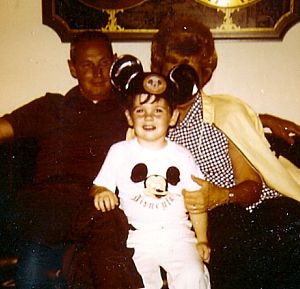 I'll leave y'all to guess the years in which these were taken. Please use the comments to share your earliest (Disneyland or not) theme park memory.

rick stevens
July 16, 2007 at 10:54 PM · Nice pics! I remember that my Dad would always wear a suit to go to Disneyland and we would wear our Sunday finest. My earliest memories are from home movies. I do remember sitting with the engineer on the Casey Junior train and ringing the bell, riding Dumbo with my mom, and being scared on Mr Toads wild ride. I think I was around 2 or 3 so it would be 1958 or 59. I also remember the flying saucers, 20,000 leagues, and of course the sky buckets (that is what we always called them). My Mom had a friend that had a couple of kids around my brother's and my age. We would do a yearly Disney Birthday trip to celebrate all four of our birthdays. Then there was Grad Night.....I don't remember much about that but my program said there were a couple of good bands playing. We wore suits and ties and were searched for alcohol before entering. We went on it's a small world near the end since we were all so tired.

Jake Countiss
July 17, 2007 at 11:25 AM · Disney is the reason that the theme park business is so big today. Walt Disneys escape from the boring county fairs was the fuel that lighted the fire of parks. Thank you Disneyland, and Walt Disney. Also thank you Robert for starting up this site. Happy 52nd Disneyland.

Mike West
July 17, 2007 at 5:07 PM · Here is what I sent to my Disney Sales Rep!
I just wanted to say Happy 52nd Birthday!
Just what a gal wants to hear, eh?!
As you all may know, it was 52 years ago today that Walt opened Disneyland to the press for its’ televised debut.
And what followed were the happiest memories for all of us.
Fondest regards,
Mike West
AAA Sojourns Tour Product Manager

I will always be known by everyone who knows me as the Disney guy. Fuelled my love for coasters, for theming, & ultimately for tourism which is how I make my living.

Of course, I dream of a Tomorrowland that is no longer barren. Hopefully the return of the subs harkens that. Perhaps they will give the Astro Orbiter the height it once had, return the Peoplemover to moving something, & America Sings where we can learn folk music of America instead of bluetooth technology. (A guy can dream, thanks to Walt Disney). Don't get me wrong, I still love DL & still have much to experience there, no doubt, for the next 52 years or so.
Someday I’ll dig up my eigth grade end of year project which was a collection of art projects I’d done on DL. Mostly just tracing, but quite the obsession.
I even had a t-shirt made when I was a kid…with those velvet iron on letters. It said: Imagination is the only key to Disneyland.
The guy at the t-shirt shop really got into it, & crafted an old fashioned key out of the characters 8 & F.
That guy who made it remembered me years later, & we became friends. We even built a Haunted House in Monterey to benefit the boy scouts one year. Hows that for imagineering?
Never been to World
Never even been to DL for the holidays.
Joaquin & I have vowed to go this year since he’s from L.A. & had never been during the holidays either.

Betty Rohrer
July 17, 2007 at 7:28 PM · i am the odd one here. i was 5 years old when the park opened but i was 13 before i went for the first time. my grandmther was a pie baker at Knotts and my family was Knotts or nothng. my teen memories of Disney are the private parties after hours and of course grad nite. my favorite Disney memory was a party with a friend's
family. she and i rode everything we had wanted. still had an hour left, so we rode the jungle cruise for the rest of the night,about 8 times. cm's were having fun with us. even made one last trip when others had been turned back.a cm got us on at the very last minute. we were 30 or 40 minutes after closing getting to front gate but we lived to do again.

Dwight Graham
July 17, 2007 at 8:27 PM · Made it to the Magic Kingdom for the 40th birthday party back on July 17th, 1995, and found the park that day as crowded by evening time as I've ever experienced in the now 52 years of going there. Randy Travis sang our National Anthem from atop the Mattorhorn Mountain that day too. It seems that "Birthday Cake" was being given away at 2 or 3 locations around the park also...still the only rememberance of any kind of free-bee food wise ever at Wally World. Though crowded that day I still look back with a nostalgic fondness that this Disney Kid was able to be there on such a special day. AAAUGH !