One week after Halloween Horror Nights kicked off at Universal Orlando, Universal Studios Hollywood unveiled the 2007 version of its annual Halloween affair.

The evening started off with actors congratulating one another during an awards show. (Hey, it's Hollywood, folks. This is what they do.) Film director and rock star Rob Zombie held court, recalling stories about horror directing legend Roger Corman... 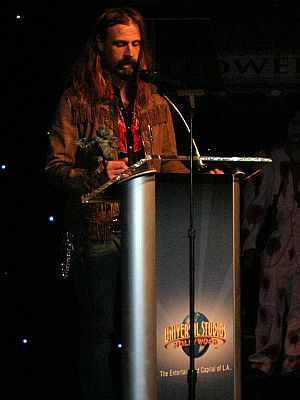 David Arquette showed up in full Halloween garb, a Zorro get-up fresh off of Castro Street... 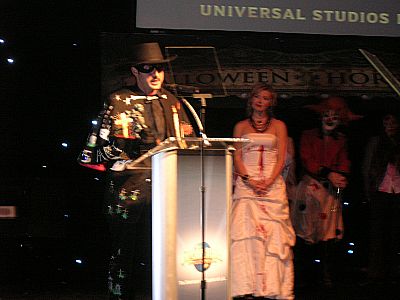 Actor David Arquette gets a rare chance to be the most famous person in the room.

But Child's Play director Don Mancini stole the show with a politically-charged speech that accurately summed up the horror genre's appeal.

"There is a code in the horror genre. Jason [from Friday the 13th] kills people who engage in premarital sex. Hannibal Lecter kills the rude... but no one dies who has committed no wrong."

"If I could borrow a line for Sally Field... if Freddy, Jason and Leatherface ruled the world, there would be no more goddamn wars. These characters, unlike some governments, always insist on having reasonably plausible motives for killing people."

So let us accept this reasonably plausible motive for a Blog Flume entry, and get away from the made-for-media photo op and into the park.

Full disclosure: This was my first Halloween event. Yep, your TPI founder and editor has managed to avoid Halloween events up until now. So I've got nothing for you in terms of context to pass judgment on tonight's entertainment. I'll just lay out what you've got here: