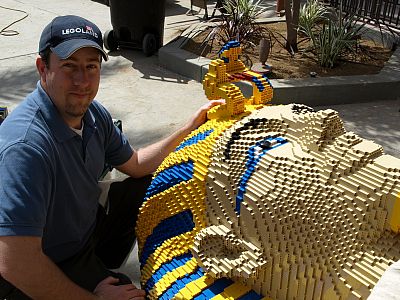 The idea for Land of Adventure was born one year ago, Vollbrecht said, when Legoland officials asked him to submit a concept for a new themed land, based on Lego's popular Adventures line of characters. Vollbrecht opted for an Egyptian theme, and after many more concept drawings, construction began last year.

Visitors to the new land will first notice the towering 16-foot pharaoh who stands guard outside the Lost Kingdom Adventure building. Made from more than 300,000 Lego bricks, the pharaoh is supported by a core of six-inch box steel. 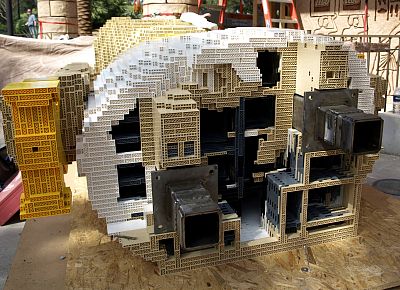 Vollbrecht explained that Lego's master builders start with a prototype design for each model that they build in the park. Drawing from a massive collection of Lego bricks, sorted by color and style, master builders assemble these prototypes based on concept drawings. When they are satisfied with the design, they then create a duplicate -- the final model that will stand in the park. Larger models are built on steel support frames, animation and audio elements are added as needed, and, yes, all the bricks are glued together. A spray of "sunscreen," a UV light protector, completes the construction before the model is sent into the park for installation.

Lost Kingdom Adventure itself, though, features very few Lego models inside the ride itself. Black light floods all but one of the ride scenes, and after testing every color of Lego brick available, designers found that almost all appeared washed out under the black light, according to a park spokesperson. That left designers to create a Lego-inspired adventure, without the bricks themselves. (Actual brick models do appear in the ride's final scene which, located just before the outdoor unload platform, is lit with natural light.)

I was not able to ride the ride, as engineers from Sally were making their final tests. But I did get to walk through the attraction, and found more than a few prime targets. Vollbrecht promised that every target in the ride will trigger some animation element, in addition to scoring riders points, but some targets will deliver more than others....

If you don't mind the spoilers, click on the photo gallery below for a scene-by-scene walk though Lost Kingdom Adventure:

Sylvain Comeau
March 7, 2008 at 3:50 PM · I have a question. Why does Fantasmic show up twice on the top attractions list? It's a great show, but come on. Can someone fix this mistake?