Please visit our Four-Hour Tours page for an explanation of the concept, as well as links to additional Four-Hour Tours. The attractions and restaurants selected for this tour are those at Disney's California Adventure most highly rated by Theme Park Insider readers. You may click on the attraction links below to see complete attraction descriptions and reviews. 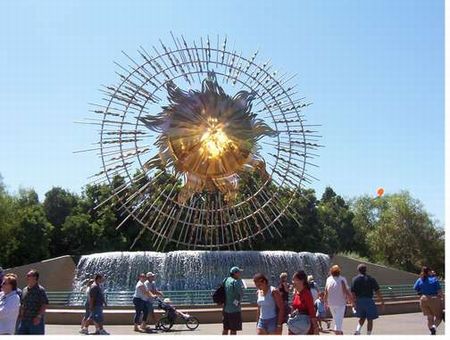 Disney's California Adventure opened in 2001 on the site of Disneyland's former parking lot. The park is beginning a multi-billion dollar make-over, altering the look of much of the park and culminating in the debut of the Pixar film-themed "Cars Land" in 2012.

Before you go: Avoid the wait at the park's ticket booths by buying your tickets online at the Disneyland website and printing them out at home. Most visitors will visit California Adventure as part of a trip to the original Disneyland Park, which stands just steps away, across an esplanade. Keep in mind that, unlike with Walt Disney World tickets, there is no option to buy an upgrade that keeps your Disneyland tickets from expiring 14 days after their first use. So do not buy more days than you will use on this trip. If you wish to upgrade your ticket to add additional days once you arrive, you can do so through Disney's Guest Relations desks at the front of each park. (In addition, FYI, all multi-day tickets sold at the Disneyland Resort are park-hoppers, so you can visit both parks on the same day.)

Finally, Disney will debut the eagerly anticipated Toy Story Midway Mania ride at California Adventure sometime in June. Be aware that crowds are likely to be substantial in the first few weeks that ride is open.

When you get there: If you, like most visitors, are driving to Disney via Interstate 5, you'll likely part in the Mickey and Friends parking garage and take the tram to Downtown Disney, where you can make the short walk to the two parks. Plan on at least 45 minutes (an hour in the summer) to park, take the tram and walk to the park after you leave the highway. You will want to arrive at the park's front gate a few minutes before the park opens. You can check California Adventure's operating hours on the Disneyland website.

1. Once in the park, make a sharp right and get Fastpasses, Disney's ride reservation tickets, for Soarin' Over California, which you will visit later in the morning.

2. Next, moved quickly back to the Paradise Pier section of the park and, if Toy Story Midway Mania is open, get in line for that new Pixar-themed shoot-'em-up dark ride. Otherwise, just skip to the next ride on the itinerary.

3. California Screamin', located next door to Midway Mania, is built to look like an old-fashioned wooden boardwalk roller coaster, but it's really a modern steel design, with a high-speed launch.

4. After riding Screamin', head back across the lagoon to the Golden State section of the park and your ride on Soarin' Over California. (If Midway Mania was not open and you have several minutes before your Soarin' return time, hop on the Grizzly River Run, a white-water raft ride, on your way back to Soarin'.)

5. Make your way back toward and past the entrance plaza and into the Hollywood Pictures Backlot, where you will now pick up Fastpasses for the Twilight Zone Tower of Terror before queueing up for the next showing of the live musical show, Aladdin.

6. After Aladdin, walk next door for your ride on the Tower of Terror, an abbreviated, yet still worthy, version of Walt Disney World's classic indoor dark ride.

And... that's it. For lunch, we suggest walking back to Downtown Disney and selecting one of the sit-down restaurants there, such as Ralph Brennan's Jazz Kitchen or Naples Ristorante e Pizzeria. After lunch, the rest of the day is yours, to enjoy a swim, nap or to wander either Disneyland or California Adventure and discover what else these popular theme parks have to offer.

[Tomorrow: We wrap up this round of 'Four-Hour Tours' with the tour plan for Disneyland.]

James Rao
April 25, 2008 at 7:00 AM · Man, seeing this touring plan makes one realize just how flawed DCA truly is right now. Disney made a huge mistake when they tried to make a midway, iron ride park...and 1.2 billion in changes may not be enough....

Monsters Inc and Tough To Be a Bug may be the only things missing....with Monster's Inc being the one unique thing people may want to hit if they have some extra time.

But they are not missing much. Sadly this park is a four hour tour by default.

Bradley Robertson
April 25, 2008 at 8:23 AM · James I agree with you. DCA is a smaller park and a four hour park by default. My wife and I saw everything there that we wanted to in about three hours and still had time for ice-cream.

Deidre Dennis
April 25, 2008 at 10:03 AM · I have to agree with you guys. Unfortunately the only reason we visit this park is for Tower of Terror because our son absolutely loves this ride and the one at WDW. It's a nice break from the crowds at the park across the way at Disneyland, but when we went last year we literally rode TOT back to back to back and never needed a fastpass for any of the rides. This park really can be done in a matter of hours. Not sure how they went so wrong with this particular park when all the others are a really good product.

As a group of 10 of us are going to Disneyland in late August, (all of them first timers except 2 of us), really looking forward to the 4-hour tour plan for that park.

Brian Afdahl
April 26, 2008 at 11:04 AM · If your only going to be there for 4 or 5 hours. I suggest parking in downtown disney. You get like 3 or 4 hours free and then if you eat in downtown disney you get an extra 2 hours with validation.