May 15, 2008, 12:52 PM · ORLANDO, Fla. - Universal Orlando cut the ribbon Thursday on The Simpsons Ride, declaring the attraction, which had been in 'soft opening' for weeks, officially open to the public. 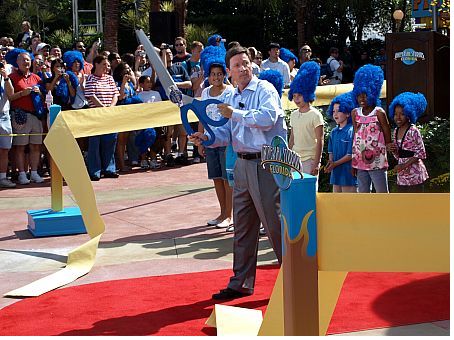 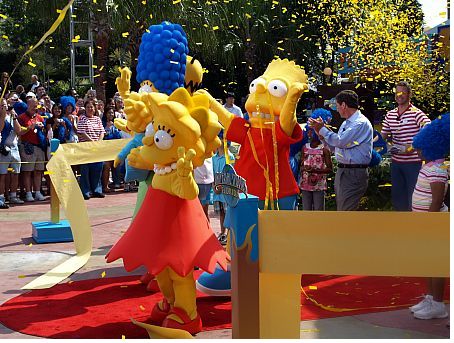 Simpsons characters celebrate the opening of their ride at Universal Studios Florida.

Inside, visitors will find the building structure and ride mechanism the same as it was as Back to the Future, which closed last year. Only the ride film and interior and exterior decor have changed.

The IMAX-style film retains the same spirit of abandon that made Back to the Future a fan favorite, though The Simpsons Ride adds a massive dose of irreverence. The show plays off its theme park setting to elevate the TV series' characteristic irony to an even higher level. It's a deconstructionist's dream (or nightmare): a theme park attraction that simulates... a theme park attraction.

What else would you expect from The Simpsons?

This might be the most script-heavy theme park attraction ever built, with a gag-filled storyline that begins on video screens in the queue and continues on to the massive IMAX-style dome at the attraction's heart. Every word in the attraction's script was written by Gracie Films (the production company behind The Simpsons TV show), said Mike West, Executive Producer of The Simpsons Ride for Universal Creative.

All the animation and voices for the attraction are original, performed by the original voice cast. The animation in the queue is traditional, 2D animation, while on the dome screen The Simpsons are the more 3D-looking, computer-animated versions. That show is digital video, not film, West said, processed at a ridiculous speed of 8 GB a second. 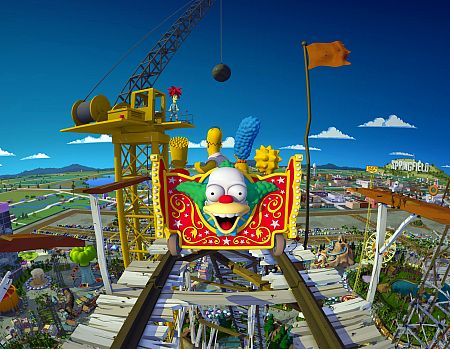 On-ride image from the beginning of The Simpsons Ride, as Sideshow Bob prepares to send the Simpsons to their doom. Oh, and you, too. (Image courtesy Universal.)

"It was a daunting challenge for the tech guys," West said. The ride also features the first 360 rollover in a simulator ride, he added. (Don't worry, riders don't actually go upside down.)

Pay close attention and try to catch all the references to other major theme park attractions during the ride. Following the ride's roller coaster opening, you'll see homages to Pirates of the Caribbean, Indiana Jones Adventure, Jurassic Park River Adventure, the Waterworld show at Universal Hollywood, Revenge of the Mummy, SeaWorld's Shamu, and more. 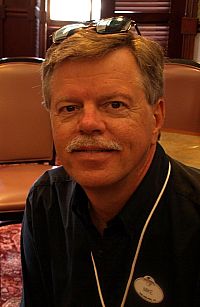 But what I wanted to know at the end was... whatever happened to Maggie?

The Simpsons Ride also opens to the public at Universal Studio Hollywood on Monday, with a press opening there this weekend.

Overall, The Simpsons Ride hits all the right notes, satisfying both fans of the show and theme park junkies. There high "repeat ride" value here, too, as you'll need multiple viewings to catch all the references.

AWESOME! I'm glad it's all Digital. That was one of my biggest fears right now with this and any attraction that uses IMAX or Film screens like this. Growing up with BttF and Star Tours was somewhat painful in more recent years as you could see the damage to the screens and film. 8MB per second? NICE.

I look forward to riding this attraction in Hollywood later this summer!

Brandon I believe it says 8GB a second. And I am going to assume that it is actually 8 Gbps and not 8 GBps. I don't even want to think about the processing that would be involved for the latter. But I agree with you and am also glad it is digital. I hope the same thing is done with the rumored Star Tours 2.0

The attraction was excellent. What I was most scared of was that it wouldn't be funny, but the humor was a step back towards the glory days when I would laugh out loud.

As you walk in to the wait line, you get to enjoy "Krusty's Favorite Moments" of the Simpsons last ten seasons. A friend that I was with suggested they should play the movie instead, but I'm glad they didn't, after all, you wouldn't want to see a movie from the middle to the end and not have a clue what's going on, so I like the funny and entertaining clips that were selected. The wait time for me today was 60 minutes and the "Favorite Moments" video on the screens just barely started to re-run what I had already seen as I was waved in to stand in line to get on Car 2. The inside was also done very creatively with character interactions, but you have to go and see it yourself, I don't want to spoil anything, they were quite amusing. The Ride itself with the huge IMAX screen was phenomenal. It was what i'd like to call a "simple, but effective and well done attraction." The Ride was very well done. I had no idea what the ride would exactly be about besides something having to do with Krustyland Theme Park and I was surprised by the fun filled action with many classic Simpsons Characters.

So in all, I was impressed by the attraction and it was more than I was expecting. I was one of those that were skeptic about whether or not The Simpsons Ride could fill the shoes left behind by Back To The Future. I'm glad to say it did.

Oops... good catch Bradley. I think I was definitely amazed at the 8 Gb per second that I wasn't even thinking about what I was typing. 8Mb per second was cool... what, ten years ago? Haha, anyways, I agree, don't wanna get into the GB/ Gb thing. And I'm excited to know that there's some sort of "inversion" on this ride!

I wrote last week that I would be covering the two events in Orlando this week, but I didn't post the specific times and dates. Several TPI readers wanted to attend, and would have if I'd posted the info. Sorry for dropping the ball.

Most times when parks are doing mid-day openings, park visitors can drop by to watch (or at least get a glimpse from behind the press and invited guests). I'll try to remember to do a better job of posting the time and date details for such events that I plan to attend, in the future.

Is anyone going to cover the Hollywood opening on Saturday?

Before I left for Orlando, USH sent me an invite to a sneak peek day today, from 6am to 10am for selected press. So there might be a public soft opening today at USH after that, too.

And lest I forget... this classic TPI discussion thread, where readers submitted their ideas for a Simpsons theme park.

It looks personally to be to be really stupid and Universal should have kept Back to the Future. If they want to compete, they need to get rid of the bad rides, not the classics. Dumb, Dumb, Dumb!

I agree, Anthony. Losing BTTF was a bad idea. I assumed they were doing it because the ride broke down so much, but then they didn't update the mechanical components and just threw in a new movie, so that was pointless.

Although I loved the new attraction, I think it could have replaced something else, or just received its own new section.

We experienced Krustyland during the soft opening and got to ride it from two locations. The middle is by far the most effective location. Avoid the edges. Oh, and take your Dramamine (tm)!

Was never impressed with BTTF. That or Star Tours. They both made me sick and I just wasn't impressed. I see nothing wrong with changing rides. Parks probably feel like they have to stay up with the times. I grew up loving BTTF the movie, but my son has no idea what that is. I'm sure they're just trying to keep current.

Vote of the week: The Simpsons or Toy Story?