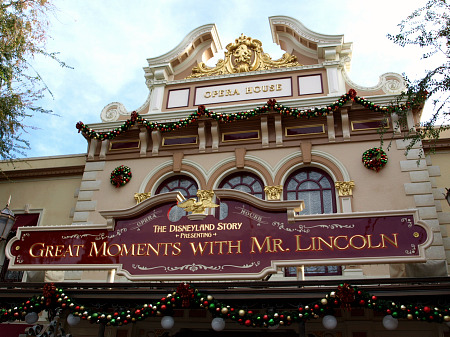 This new Mr. Lincoln is based not upon the hydraulic technology that powered all animatronic figures from the original Mr. Lincoln through today's characters. Instead, it's based on a new electronic model, one that allows Disney's Imagineers to construct more realistic human forms from the skeletal level, explained Disney Imagineering Executive Vice President Scott Trowbridge. 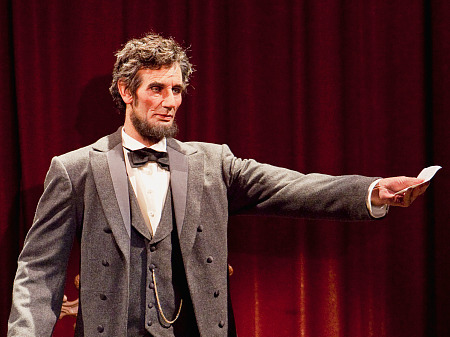 I asked Trowbridge and Imagineering Senior VP Tony Baxter to explain what this new technology will allow Disney to do with theme park storytelling. (Your new buzzword is "autonomatronics." And don't miss Baxter's wish to see a new generation Indy in the Indiana Jones Adventure ride, either.)

As for Mr. Lincoln himself, the newly designed show jettisons the binaural gimmickry of the 2001 version, which was replaced in 2005 by the "Disneyland: The First 50 Magical Years" film, with Steve Martin. We're back to a modified version of the pre-2001 Mr. Lincoln show, with narration by Paul Frees and Lincoln's voice again performed by Royal Dano.

In doing research for the show, Imagineers found forgotten studio recordings of Dano's vocal performance, allowing them to replace the previous audio track with a much cleaner version, Baxter said. Indeed, the audio in the show sounds crisper than I've ever heard it. A new digital projection system also displays the filmed prologue to Mr. Lincoln's appearance in vivid color and sharp contrast.

Imagineers have better captured the asymmetry of Lincoln's face and body in this newest figure. Lincoln furrows his brow, wrinkling the skin above his nose. His eyes twitch and eyelids droop. As Baxter and Trowbridge promised, this new Lincoln offers a greater range of facial expression than ever accomplished before with an animatronic figure.

Not yet realized, though, is convincingly lifelike oral articulation. No, a deaf person could not read Lincoln's lips. The lip and tongue movement that would allow that level of detail appear to remain a step beyond current technology. Yet Lincoln remains the strongest step yet toward the ideal of a full articulated human replica.

And let's not forget to celebrate the return of this poignant take on Lincoln's life and the American Civil War. Buddy Baker's score, incorporating music from both previous versions of the show and Epcot's American Adventure, musically sets the stage for Lincoln's appearance, animating the still photos and paintings that precede him.

Good nominee just because of it being the classic example of Disney's human animatronics. However, my only problem that I see, which might just be the Hall of Presidents, is that Lincoln needs an updated audio track. Its quite scratchy IMO at the Hall of Presidents. I only assume the track is from Disneyland.

Still, a solid runner I think!

AAs that emote...that is amazing. That would address the main weakness of AAs, even through all the technological breakthroughs, like Buzz and Mr. Potato Head. I hope they pulled it off.

By the way, Robert, where was this panel discussion? At the D23 Expo?

Sorry for not being clear about that. The two were speaking to reporters, in the Opera House lobby, before the preview showing Thursday morning.

I'm so happy to hear that the Royal Dano speech has been restored. While the Gettysburg Address was interesting merely from a historical perspective, the original speech offered a timeless message relevant to Americans of every time. Lincoln's firm belief that "if destruction be our lot, it must spring from amongst us; it cannot come from abroad" was a caution to audiences coping with Cold War fears in the 60's, and we have a similar need for this message today.

I saw it yesterday morning. The new Lincoln AA is astoundingly cool! First show of the day, first show open to the public (Tony Baxter was in the audience), it was nonetheless poorly attended; of course everyone else was full-speed ahead for Buzz Lightyear or whatever... If only they'd known!

Thanks for the quick review Rhys... and I agree, too often folks are racing around searching for the next three minute thrill, when some of the best stuff is waiting right beneath their respective noses.

Robert - time for a Tuesday Visit To The Park, eh?

What a thrilling surprise to arrive at Disneyland on my birthday Dec. 20 and see that Lincoln is re-opened - and an even better surprise that it's a whole new figure. The facial is good, not perfect, but what really bothers me is that the body is still very stiff and mechanical. The eyes sure dart a lot, but I was in the second row. Perhaps it looks more real, as if Lincoln is speaking to the audience, from a few rows back. Finally, the voice is not muffled.
KUDOS for returning the best closing music ever, the Battle Hymn of the Republic. I don't like the Lincoln projection on the sky. Just leave the clouds forming the flag like before.
Thanks for a wonderful surprise birthday present!