January 29, 2010, 11:40 AM · Universal Orlando announced today that it has bought airtime for a TV ad during the first half of this year's Super Bowl. (Featuring, of course, my Indianapolis Colts, playing the heel for a change, against the pretty much universally beloved New Orleans Saints.)

Last year, Universal ran an ad that kicked off its million ticket giveaway promotion. This year's commercial will promote the Wizarding World of Harry Potter at Universal's Islands of Adventure, though it will also promote the resort in general. But what caught my attention was the screen grab Universal released from the ad: 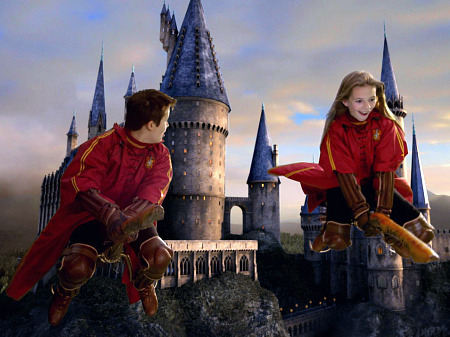 I'll put 9-to-1 odds on the sticks being on the former Dragons. 10-galleon minimum bet.

I think this is probably just being far too much looked into.

Commercials are always exaggerate themes of what you really experience or ride on in the park.

Remember the Surrender ads? They don't let you ride with Captain America on the ATVs and you don't run and shoot aliens on the streets of New York in Men in Black.

It would also be like saying you stand in tower of terror while a bellhop operates the drops.

I'm voting sticks on the Dragon, too. Mostly because I've heard that the Hogwarts ride is built around the Floo Network and the image capture shows the exterior of the castle (which would be consistent with the position of the Dragon Challenge).

It makes sense, too, since Harry rode his broomstick in the challenge.

I agree with the anonymous poster, though, in that putting a little broomstick decoration on each seat won't overcome the fact that you're still sitting in that bulky suspended coaster train. It won't look anything like that picture, folks. (Nor will riders be issued Gryffindor Quidditch kit before riding, I assume.)

i dont see them adding broom sticks to any attraction. What they should do is build a ride around quidditch where riders compete in a virtual quidditch match.

side note, does anyone know if they will be selling maggie smith posters????

MOTHER TO YOUR WORD.... strike that, reverse it

No, but I consider the absence of Helen Mirren from any installment of the Harry Potter series to be a crime against beauty and humanity.

I just think its more of a visual than on any attraction. I mean, you don't stand on the Tower of Terror (like they show in EVERY ad)

they will not put it on dragon challenge because like duelling dragons its still going to be two dragons battling each other so, if they did convert the seating to broomsticks it would ruin the theme. and it wont be on the new ride either that would be too complicated with a kuka arm system, its either just false advertisement or they are building another ride that they did not want aynone knowing about??

Are they gonna give free tickets again this year? sure doesn't seem like they need to with all the publicity HP land is getting. But still giving away tickets like last year was awesome.(especially now since the prices have gone up)

The broomsticks will not be on the dragon coaster, because careful examination of the ad reveals the car design. the roller coaster is meant to represent the dragon chasing the two children.