June 16, 2010, 9:06 PM · ORLANDO - Universal Orlando Resort opened The Wizarding World of Harry Potter (sort of, you can't get in until Friday morning) this evening with a celebrity-filled ceremony in the Islands of Adventure theme park.

Author J.K. Rowling was there, though she ducked the media in favor of greeting some of the invited children. I did pick her out of the crowd at the ceremony, though she deftly managed to keep folks between her and anyone with a professional-quality camera, preventing me from getting a clear picture to show you.

Several readers tweeted and messaged me that the sound cut out on the speeches during the live webcast, but no matter. You didn't miss much, as Tom Williams and Ron Meyer of Universal and Barry Meyer of Warner Bros took turns congratulation each other, as well as the Universal Creative team and Harry Potter artistic director Alan Gilmore and production designer Stuart Craig for their work on the project, all to polite applause.

The invited crowd roared more loudly, though, in welcoming conductor and Academy Award-winning composer John Williams to the stage with the Orlando Philharmonic Orchestra. Williams led the musicians in two numbers from his Harry Potter scores. 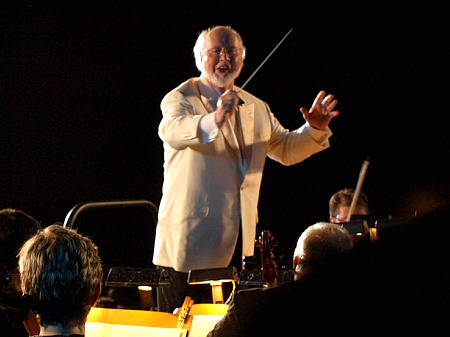 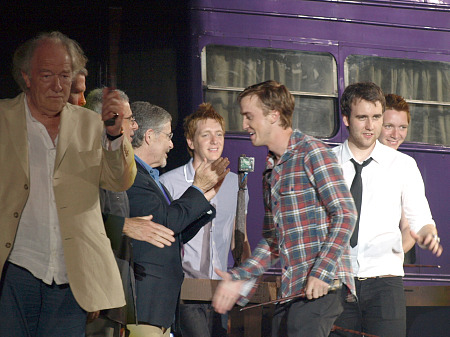 A Ford Anglia then drove up, and out hopped Rupert Grint (Ron Weasley) and Harry Potter himself, Daniel Radcliffe. Radcliffe addressed the crowd, urging them to wave the souvenir wands they'd been given toward Hogwarts Castle, while casting a "Lumos" spell. 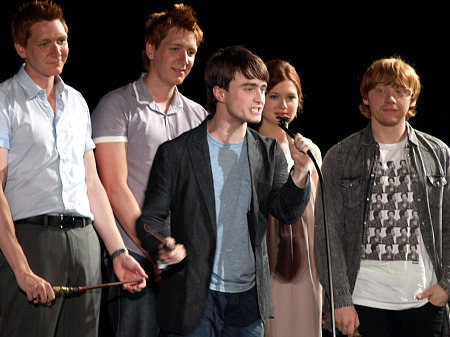 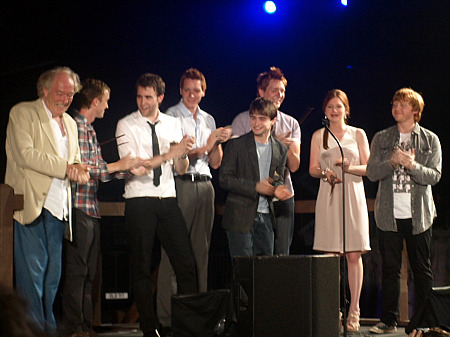 The first two attempts elicited little more than a flicker, but on the third - "Lumos Maximus!" - the previously darkened castle glistened with light as fireworks then exploded behind it. 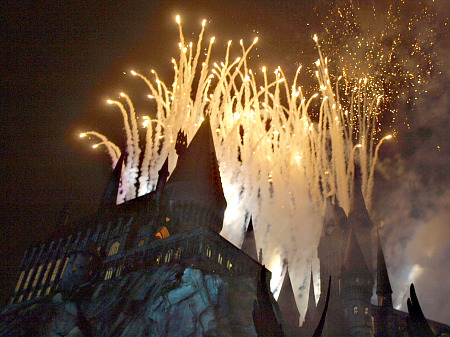 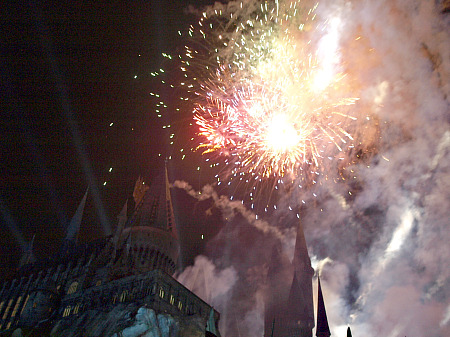 After the finale of the Thinkwell-produced ceremony, many of the invited guests crowded the Forbidden Journey queue, while the Orlando Phil serenaded those who remained behind to nosh on fish n' chips, Scotch Eggs, haddock, salmon, roast beef, Cauldon Cakes, Treacle Fudge, life-sized Chocolate Frogs, and, of course, Butterbeer.

By the way, having tried it now, I'm convinced that this magical potion is part of Universal's diabolical plan to force return visits to the Wizarding World - I could develop a ruthless addiction to this stuff.

Check in tomorrow for a video report from inside the Wizarding World of Harry Potter, along with my review of Harry Potter and the Forbidden Journey.

Were there any audio issues there, or was that all bad tech work for the live stream (online, there were long segments where the sound was nonexistent)?

Audio at the event itself sounded flawless to me. And the symphony rocked.

Butterbeer oh Butterbeer, how I can not get enough of thee.
That is some seriously addicting stuff and sure has me coming back to the land just to have one. Universal is going to be making a killing off the sales of butterbeer.

Wait... i was watching online too. the only part the sound cut off was when the USO and Warner Bros Heads were speaking. Thank goodness it was at that time, b/c if it was in any other part of the ceremony I would have killed someone.

i'm immensely JEALOUS of you Robert. I keep thinking I wanted to be there more than anybody in the crowd. and i'm curious looking at the time stamps on this post. How was it written at 9:06pm when the ceremony began at 9:30? Is this on Cali time?

who's thinking USO might market butterbeer in the future? Coming to a Wal-mart near you?

Great pics! Okay but I still want to know what butterbeer tastes like! Butter? Beer?

As always, the best coverage of theme park related news and events (including this, what will be the biggest industry story of 2010) is provided by Robert Niles and Theme Park Insider. I encourage everyone of the TPI squad to post (share) this story on their Facebook pages to continue spreading the word about this extraordinary website.

Yes, the webserver is on Pacific Time, thus the timestamps.

As for butterbeer... well, imagine root beer - how creamy a good cup of that soft drink can be. Now, let's take away the "root" flavor, the flavor of one of those root beer barrel hard candies. Replace it, then, with a rich buttery flavor, with carmelized sugar undertones. So instead of being "root" beer, it's, well, butter beer.

Once you taste it, you realize that this is exactly what butterbeer should taste like.

My thoughts exactly, TH. Great reporting as usual, Robert! Thanks for continuously keeping us in the loop. Can't wait to get there in another week!

Does anyone know if Universal will be re-broadcasting last night's webcast?

Thanks for the updates....

Yeah, butterbeer is definitely addictive - I've blown $100 so far on butterbeer alone since WWoHP started soft openings. (Of course, I'm in a slightly better position then most people to buy it everyday.) ;)

Sidenote: My spellcheck recognizes WWoHP but not butterbeer?!

I'm obsessed with the idea of trying Butterbeer, which I've read described as shortbread cookie dough with butterscotch in the foam. Seriously, I think about this wonder elixir while I'm out walking the dogs. I'd be amazed if Universal could resist eventually working out a deal to sell bottled versions of this nectar of the gods to the masses at every Kwik-E Mart in the United States. How would this work? I understand it requires a real soda jerk to add the final touch of butterscotch foam to complete this miracle thirst quincher. What do you guys think? Will this liquid ambrosia remain a theme park exclusive or will a lesser home version be made available to travel reluctant Muggles.

Looking forward to hearing your thoughts on the attractions and atmosphere!