A review of 'IllumiNights: A Busch Gardens Encore'

July 15, 2010, 7:58 AM · With a park that prides itself on having a small park feel and big park attractions, it’s often difficult to come up with a way to put an exclamation point on the evening and to keep guests hanging around until the park closes. In the past, Busch Gardens Williamsburg has showcased two different end-of-the-night Cirque-style shows in the Royal Palace Theater featuring acrobats, clowns, gymnasts, and other amazing performers. Both Imaginique and Kinetix were great shows, but forced guests to break up their day to head to the theater and stand in line, hoping to get a good seat for the show. As good as the shows were, it sometimes just wasn’t worth the hassle to take time in the day to see. This season, Busch Gardens Williamsburg has re-envisioned the nighttime spectacular, taking it down a notch or two and making it more intimate and organic. I was invited by the park to check out this new concept over the weekend as part of the park’s media day for IllumiNights. 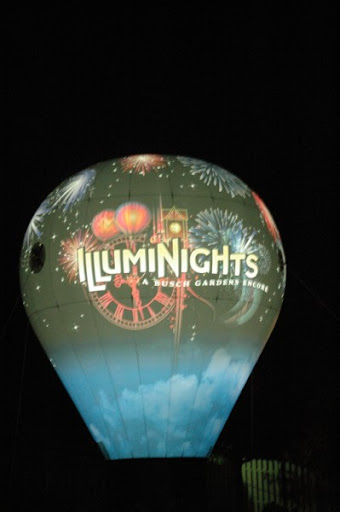 Instead of staging a spectacular fireworks/water cannon show similar to Sea World's Mistify or Disney’s big lagoon shows, the creative team at BGW wanted to come up with a way so that everyone in the park could be part of the show. The result of their planning is called IllumiNights, and it fits in well with the park’s overall themes and mission to provide high quality family entertainment. Vice President of Entertainment Scott Gasparich and his team came up with four different shows that occur around the park throughout the evening. At the top of every hour, starting at 5 PM, the shows start, with each one capturing the character of the country where it takes place.

In Killarney, there’s a leprechaun searching for his pot of gold, taken by his lost love. The show is staged in the main square between the Abbey Stone Theater and Grogan’s Pub with action occurring all around guests gathered to watch, and even includes some audience participation. The whimsical, playful show involves puppetry, music, and some special effects. Guests who have experienced the popular Howl-O-Scream attraction “Jack is Back” will probably see some similarities in staging and style. 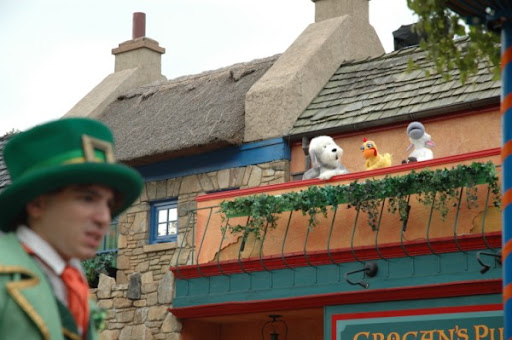 In Aquitaine, guests who happen to be strolling through at the top of the hour will see a grand parade, the first in Busch Gardens' history. From bakers to Can-Can dancers to poodles, the performers strut their stuff through the streets of France interacting with guests along the way. The costumes and mini-performances are well done, and young ones will be excited to see the performers come right up to them and welcome them to France. The props and floats, along with a piece of Busch Gardens’ recent history, make the 5-minute mini-parade definitely worth seeing. 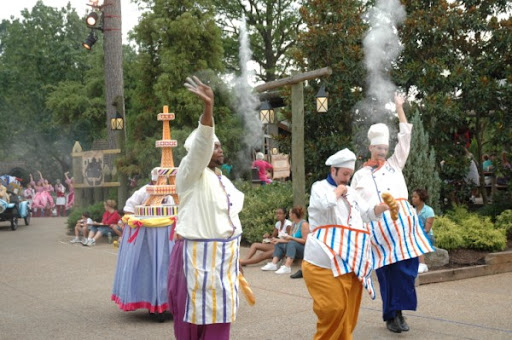 In the Oktoberfest section of Germany, the set designers at Busch Gardens outdid themselves by turning the front of the Festhaus into a gigantic cuckoo clock. At the top of every hour, the clock comes to life with actors that play the roles of the characters found on most Black Forest clocks. The lumberjack, the shepherd, the milkmaid, and others all take their turns doing their thing until it’s time for the cuckoo to announce the time. The set is a sight to behold even before the show starts, and the actors do a marvelous job bringing the clock to life. 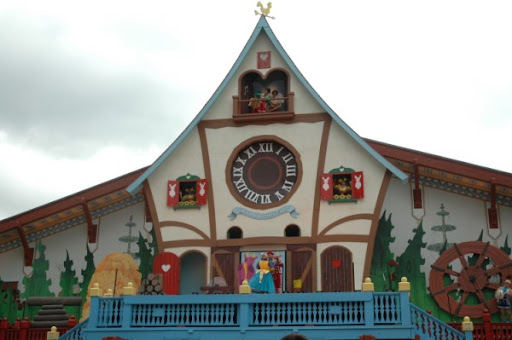 In Italy, the gardens near The Flying Machine, Battering Ram, and DaVinci’s Cradle turn into a wondrous show involving balance and strength. Four performers come together in a Cirque du Soleil styled balancing act to display their amazing skills on an intimate stage. 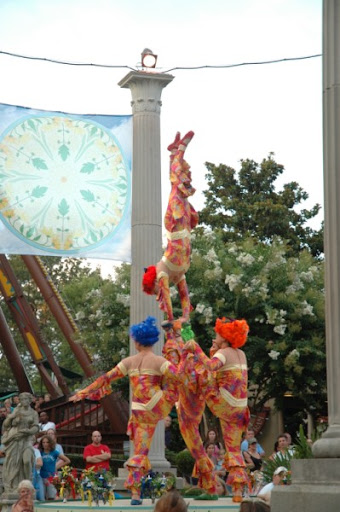 All four of the shows run for between 4-8 minutes, and repeat every hour, so there’s a good chance for guests to stumble upon one or more of them as they walk around the park in the evening. However, IllumiNights is not over when the shows are completed in the 9 pm hour. In the past, BGW has limited fireworks to the 4th of July weekend and other special events, but now a well-choreographed fireworks show finishes IllumiNights with a bang. A stirring soundtrack of music representing the countries of Europe (Ireland, France, Germany, and Italy specifically) accompanies a solid, but not overwhelming, pyrotechnic display. At BGW, the topography and park design make it tricky to put on a fireworks show, but with shells launched from Oktoberfest and Killarney, along with the primary shells shot off from the eastern edge of the park, there aren’t too many bad spots to see the show. The three bridges across the water likely provide the best views, but our spot near Griffon wasn’t too bad aside from the mammoth coaster’s supports sometimes getting in the way of a clear view. The park also offers an exclusive Rhine River Cruse to experience the fireworks from the water, and a dinner package at Bistro 205 that includes a buffet meal and reserved seating for the show. Is IllumiNights in the same league as a Disney evening show? Not a chance, but for a park that has a small park feel, and doesn’t want to build a gigantic arena for a nighttime spectacular, it’s just about right.

65.202.77.98
July 15, 2010 at 11:54 AM · My family and I have season passes and live about 2 hours away from the park. We love going but you are right that in the evening it really had nothing to push you to stay. We have seen all of the illuminights mini-shows and they were totally cool. (plus my nephew is a chef in the parade.) My daughter, as well as all the other children make it a game to collect confetti (streamers, butterflies, etc.) from each of the shows. For younger kids especially, the shows are just short enough to hold their attention. The acrobats in Italy are very talented, the parade in France is hysterical, the cuckoo clock is really neat, and the story in Kilarny is awesome. The fireworks display every night is the best. (MY nephew got to see them from the top of Griffon on the first night.) A really good reason to stick around after dark. Also, if you want to catch on of the shows and eat dinner, Grogan's Grill is reasonable (2 adults and 2 kids in my family and dinner was $40)and it is a good spot to hang out while waiting for the show in Kilarney.

Rod Whitenack
July 16, 2010 at 8:08 AM · Actually, your postion behind Griffon during the fireworks gave you a spectacular shot that is worthy of the cover of a Rollercoaster book. Nice job.

Shannon Beauchemin
July 17, 2010 at 7:24 PM · I was there on July 6. You must be at each location early or you will miss the 2 to 6 minute shows. The living clock in Germany is Very short. I arrived at four after the hour, and it was already over. The fireworks are nice and last seven minutes.