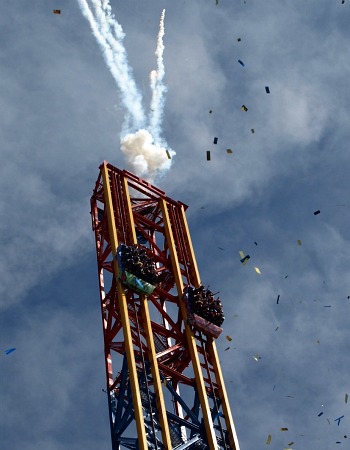 Superman is America's first backward launch coaster, whisking riders from its Krypton-inspired station at more than 100 miles per hour. Magic Mountain General Manager Tim Burkhart talked with me before the ceremony, explaining how his crew worked with Intamin to develop new, lighter trains for the ride, as well as a high-tech computer control system that allows the ride to operate at a fraction of the power it consumed before. That translates to higher speeds, bigger air and greater uptime, Burkhart said. 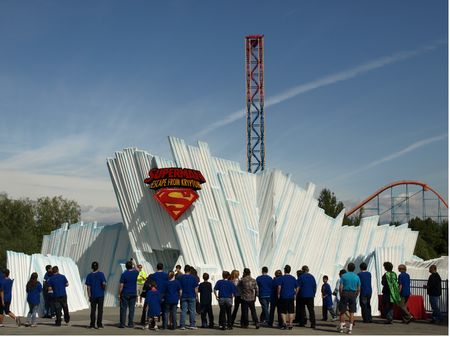 Burkhart said that the new Superman trains are built symmetrically, allowing them to be run forward or backward on the track. "I went and got a bumper car and stuck it on the train to ride it backward" when the trains were being built, Burkhart said. "As soon as I got off the ride, I knew that backward was the direction this needed to go."

On a traditional launch coaster, you feel the G-force pressure as the thrust pushes from the station. But on Superman, the sensation is opposite. You're sucked out of the station, feeling light as a feather, as you fly from zero to 104 mph in less than seven seconds. 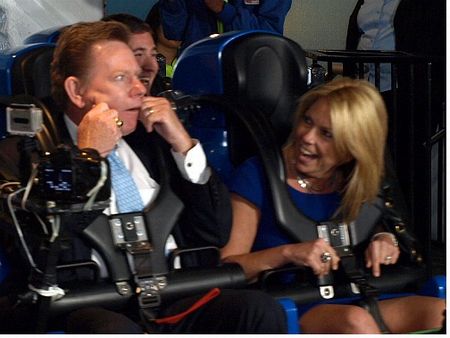 Superman delivers riders four distinct speed and G-force sensations during its brief, up-and-down ride. After being sucked from the station, the positive G-forces return, pushing you into your seat, as the train makes its momentum-propelled ascent up the 415-foot tower. At the top, you'll have a moment of weightless before the third stage of the ride, a face-down, 90-degree drop back down the same tower you just climbed.

From there, you transition to horizontal for the final stage, a gravity-driven race back to the station. You can feel the 100-mph wind pushing your face into a smile as you fly back into the station. The final brake is surprisingly smooth; I didn't notice any force to the deceleration, just a gentle glide to the finish.

Comparing Superman to traditional up-and-down launch coasters such as Knott's Xcelerator or Cedar Point's Top Thrill Dragster, riding backward definitely offers some visual advantages. As Burkhart explained to me, "riding forward, all you see on the way up is blue sky. There's no visual point of reference. Riding Superman, you can see the ground; you know exactly how high you're riding."

Magic Mountain's helped the visuals by painting the tip of the tower red, as opposed to the blue on the rest of the track. So when you see that red track, you'll know you're pushing the summit of the ride even before your moment slows you to weightlessness.

Take a ride with me:

Superman: Escape from Krypton opens to the public on March 19. Don't be surprised by long lines in Superman's first months of operation. The speed and sensation will draw the crowds, but the nature of the ride limits its capacity. Superman runs one 14-person train on each track at a time. The ride last just 30 seconds or so, but load and unload takes some time with over-the-shoulder restraints.

Thanks for the review, Robert. Nice work yet again.

As for the revamped ride, it's still a one trick pony, but that one trick sure seems like a lot of fun for the thirty seconds you experience it!

Maybe I don't know much, but is Six Flags Headquartered by Magic Mountain?

The only reason why I say this is because the "corportate" has never come to a SFGA opening (and they have had a bunch and significant ones). Especially with the Little Dipper, they could have made it into big positive press.

I would ride this attaction! Looks fun!

SF HQ is in suburban Dallas these days.

It's the little things that make it special. The red track to alert you of your impending drop, the symmetrical cars to increase your speed, the John Williams soundtrack to blow your mind. Nicely done, Six Flags.

Am I wrong on this?

Okay, to be honest, the music was laid in on the video by my video editor. (Hey, he's 10 and has a firm sense of what he considers cool. But he cut together four different video feeds for this, which I couldn't do, so I defer to his judgment on these things.) You couldn't hear on-ride music on this ride if they had it, anyway, 'cause the air's so loud when you're riding this fast.

As for the car shape, let's remember that the train doesn't turn around at the top. What was the back of the train effectively becomes the front when it changes direction on the course.

What an awesome job to have!

I am wondering why the big wigs made a trip to MM? I mean, don't get me wrong, the ride looks great, but I wonder why the trip, but never to SFGA or SFGAdv?

Because bigshots prefer LA to Chicago or New Jersey? #startingaflamewarijustknowit

Certainly appears to get much closer to the top of the tower than any time I've ridden in the past.