June 15, 2012, 9:04 AM · Disney CEO Bob Iger rededicated the company's Disney California Adventure theme park this morning, as thousands of fans awaited their chance to see the results of the park's $1-billion, five-year transformation. 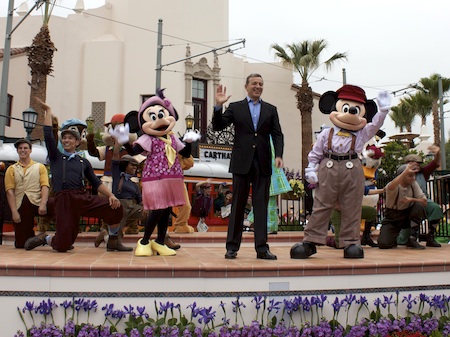 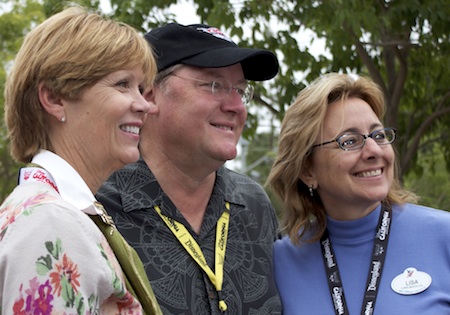 The creative team behind the most recent additions to DCA: Imagineer Kathy Mangum, John Lasseter, and Imagineer Lisa Girolami, before the ceremony

Fans started lining up Thursday afternoon for the grand re-opening, but a super-early arrival wasn't essential to claim space in the park at its opening. 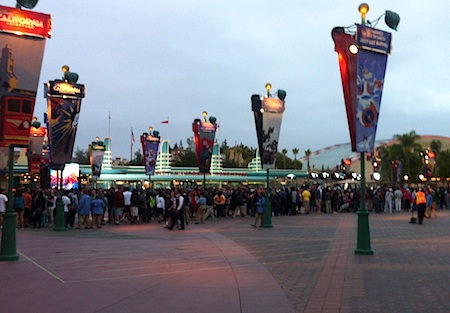 Though the waiting crowd filled the Disneyland Resort's drop-off lot on Harbor by 11pm last night, by 6am the resort's esplanade between the two parks was only two-thirds full, and Disney admitted most of those fans into Buena Vista Street in time for the 8am ceremony. (You would have a had a better view by remaining in the esplanade and watching it on the giant screen Disney had erected there.) 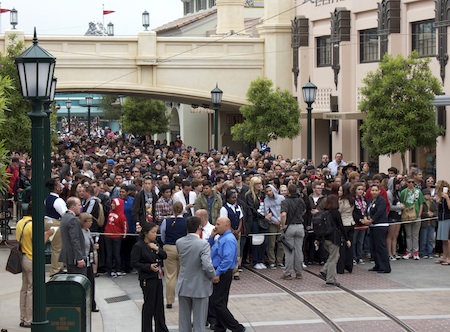 After the short ceremony, where Iger was joined by Mickey and Minnie Mouse, as well as hundreds of costumed Disney California Adventure cast members, the crew from Cars Land's Radiator Springs Racers walked the crowd back to the park's new land. 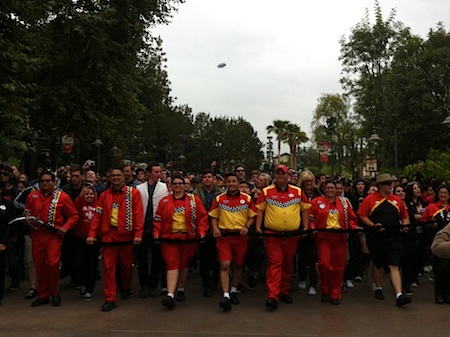 With the Goodyear blimp overhead

Within half an hour, the wait already was pushing an hour, but the early crowd didn't match the throng that swarmed Disneyland last summer for the opening of Star Tours: The Adventures Continue.

We'll have video of the opening ceremony later today, and I hope that any Theme Park Insider readers visiting California Adventure today (or this weekend) will share their experiences in the comments.

Here are the links to our coverage and reviews:

Radiator Springs Racers went down for about an hour around 9:30, backing up the queue through Cars Land. Late arrivals (perhaps encouraged by reports of the lighter-than-feared crowd) also packed into the area, and by noon, Radiator Springs Racers was reporting an estimated six-hour wait. I'm wondering what the crowd will be like when people get off work this evening and think about heading to the park.

Whoa. Glad I didn't even bother! I can wait and watch parts of the ceremony online. Too many people all at once = not so fun!

Looks like a fun opening celebration but nothing close to what Harry Potter saw. I remember the video of the 5-hour wait just to get into IOA when it first opened.

I'm heading to the Carthay Circle restaurant tonight for dinner. Can't wait to see what Andrew Sutton has in his skillet.

I may try and hit up the Single Rider RSR after but only if the line is less than an hour.

@Robert
Have fun today celebrating. If you see John Lasseter, give him a Hug for me. He's seems like He would be the coolest guy to work with.

While everyones seems to agree Cars Lands is visual great and the signature ride is great.

What is the shelf life?

Cars despite having two movies is generally considered one of Pixars weakest efforts ironically along with Bugs Life, granted a weak Pixar movie is stronger than most companies best efforts.

While attractions like Star Wars and Harry Potter have long lineages and shelf lifes, it will be interesting to see guest reactions in 2020 to see if this park was a billion dollars well spent?

I think the popularity of theme park related franchises is clear at this point: Harry Potter > Star Wars > Cars. (FWIW, I'm guessing Avatar beats Cars, but not Star Wars at this point.)

It's hard for me to judge Transformers vs. Cars because I can't isolated the Disney vs. Universal influence there. (Plus, I wasn't at the Transformers opening in LA.) Harry Potter is with Universal, but it was by so far the most popular premiere that the Universal market-share/fanbase disadvantage versus Disney didn't matter.

I was at IOA the day Harry Potter first opened and it was crazy. I was interested to see how this opening would be against that one, and it seems as if the crowds for Cars aren't as immense as the ones for HP. Regardless the crowds are huge and will be for a long time to come.

Shelf life may not be a comparable issue. Waterworld was a popular show at USH long after the movie's near instantaneous flop. Sorry to hear others feel these CARS movies were dismal but they have a good enough following to be likable and very "Disney". Also, the Muppets were stale for quite some time but I always saw people going to the Muppet Show at DCA. Fun is fun, and evaluations of what should have been fun based on box office turnout is another thing.

The films aren't the thing - it's the Cars toys that are huge, and have taken on a life of their own. As long as the toys are still being made and engaging kids then the park will be relevant.

Six hours?!?! Insane! Oh, and I would rank it in terms of movies Star Wars>Harry Potter>Cars>Transformers

With IOA this year beating DCA in guest, was that the first time a Disney park lost to another park in attendance for the USA

The crowds will only get worse as the annual pass holder blackouts end this Sunday... 1 million more locals will descend en masse.

From all the glowing reviews I have read, it looks like Disney has a real winner on its hands with Cars Land and the whole DCA rebirth in general. I don't know when I will get to visit this great "new" park, but I can't wait to do so!

Disney California Adventure has been beaten attendance wise (based solely on estimates) by the following parks over the years:

James- a sizable portion of the annual passholder population (Southern California Select) is now blocked for the entire summer. Their passes are not valid again until August 20.

Southern California annual passholders were able to visit the parks today for the first time since the opening, and the crowd's been the largest yet. The Deluxe APers also were blocked yesterday, though they were able to visit on the 15th.

The SoCal AP'ers will remain eligible to visit tomorrow and Tuesday, then they are blocked until next Sunday, when they can visit through Thursday the 28th. At that point, the SoCal APers are done for the summer - until Aug. 20, when the SoCal Select AP'ers come back, too. The Deluxe APers are blocked every Saturday between now and Aug. 19, as well as on July 4. Premium APs are good every day.

With Fourth of July week visitors hitting the park starting June 30, I expect Cars Land crowds to settle down starting July 9 and remain pretty much constant until blowing up again on Aug 20 and through Labor Day weekend.

That said, this Wednesday and Thursday might not be too bad. They'll definitely be the best days this week to go.

I went back this evening to experience Cars Land at night. It's truly amazing. My twitter feed has some photos. (@theadtraylor)

Upon arrival around 6pm, Racers was at a 200 minute wait (3:20). The queue did not stretch down the highway as it did opening day. There were quite a few times as the cars came racer down the camel back stretch that they weren't racing. Not sure what was causing this, but it happened more and more as the night went on.

Rode the Red Car Trolley. It has 4 stops, Buena Vista Street, Carthay Circle, Animation Bldg (Departure Only), and Hollywood Tower Hotel. I advise getting on the trolley at either Buena Vista or Hotel. Each car can accommodate 20 riders, therefore some have to get off at Carthay in order for others to hop on.

I'll be back for the last trip of the summer (SoCal blockouts) on June 28th for a AP showing of "Glow with Show" WOC.

World of Color's 'Glow with the Show' and the Prisoner's Dilemma

Is Universal Studios Florida about to Transform?