February 5, 2013, 3:31 PM · Great roller coasters do more than overwhelm you with physical force. They find a way to deliver something clever -- a literal twist or other element that catches you by surprise the first time you ride. Great coasters amuse and entertain, rather than push and pound. 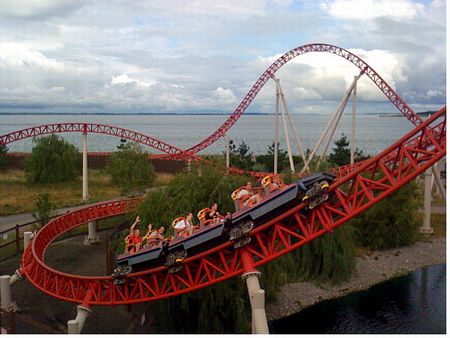 In a park filled with one-time record breakers for height and for speed, Cedar Point's Maverick remains my favorite coaster in that park. It's far from tall -- topping out at (just) 105 feet. But this frisky Intamin launch coaster delivered a unique first drop when it opened in 2007, a 95-degree plunge. That's right, you're not just dropping straight down, but down and in.

From there, Maverick is a twisting and twirling delight, hugging the beach-side terrain at a top speed of 70 miles per hour. I especially enjoyed the in-tunnel launch mid-ride -- it reminded me of the false ending in Universal Studios Florida's Revenge of the Mummy. Returning to the station building for the launch setting "sold" the pause the better than on all those other coasters with mid-ride launches out on their farthest reaches of track. You're not tricking anyone by stopping out there.

For our friends up north, shake off the mid-winter blues with a video trip on Maverick, courtesy Cedar Point:

Sadly, Maverick was not at Cedar Point the last time I visited. But, in this day and age of fully immersive themed environments, and ultra expensive, copycat attractions, there is still nothing better than the sublime thrill offered by a high quality, unique roller coaster. Maverick looks like a real sweet ride - and is definitely high up on my "to do" list. Now that my kids are all over 54" tall it is time to plan a trip to the Point....

I didn't care for Maverick on my first rides in '07. I have come to like it after my more recent visits, especially in the back. Several points really catch me by surprise. It's also one of the few coasters in what people call "iron parks" with a single rider line that's usually open. It's nowhere near my fave coaster at the Point, but I wouldn't skip it if the line is manageable...and it does remain VERY popular.

Every time I ride Maverick, it reminds me why it is such a great coaster. It grabs you from the start and never lets up, never lets you go and relax. It is constant speed, turns, inversions- just an all-around great coaster. Thank you, Robert, for featuring it!

Maverick took the spot of my favorite coaster ever since I first rode it in 2007. I love the intensity and speed, and it doesn't need to be the tallest and fastest coaster in the world.

This is not only my favorite coaster at Cedar Point, but one of my top five steel coasters overall. The ride has a bit of everything andm other than a small amount of discomfort due to the restraints, it's very smooth and enjoyable. I just wish it had higher capacity as the line was at least an hour the one time I visited the park, so I only got to ride once.

Maverick is definitely a winner, but something Robert failed to note about this coaster is that it's initial design was flawed. There was an additional inversion on the second half of the ride that was found to be so intense during initial testing that it had to be removed.

It doesn't necessarily detract from the enjoyment, but demonstrates the inability of Intamin from a design standpoint to deliver a reliable, well engineered attraction. I do applaud Cedar Point for installing a well-themed coaster that runs pretty consistantly at a high capacity, but I wonder what this coaster could have been had it been properly designed from the get go.

Yes, after the train passes through the second launch and over the lake it goes between the rocks, that was the location for an inline roll that was found to put too much stress on the trains, and delayed the opening of the ride. I don't put the blame entirely on Intamin though, this coaster (my personal favourite) is the 500th designed by famed coaster engineer Werner Stengel, so even with all of his experience mistakes were made.

What I find most interesting about this coaster though is the use of linear motors rather than a chain or cable lift. It's incredibly smooth, and you feel the acceleration up the hill and over the top.

Yes, after the train passes through the second launch and over the lake it goes between the rocks, that was the location for an inline roll that was found to put too much stress on the trains, and delayed the opening of the ride. I don't put the blame entirely on Intamin though, this coaster (my personal favourite) is the 500th designed by famed coaster engineer Werner Stengel, so even with all of his experience mistakes were made.

What I find most interesting about this coaster though is the use of linear motors rather than a chain or cable lift. It's incredibly smooth, and you feel the acceleration up the hill and over the top.

I don't get the love for this ride. I really do like it -- except for the restraint system. For those of us who are a bit shorter in the torso, it puts your ears right at some rather harsh pieces of shoulder gear, which hurts like heck when it bounces your head around.

Kings Dominion's Intimidator 305 shows that you can design a restraint system for those cars that is supremely comfortable. It is only expense that keeps Cedar Point from making this a truly enjoyable ride, rather than something to be endured.

I'll admit, I like the thrill enough that I've considered bringing earmuffs to the park, just to wear them on the Maverick.

BTW, the Fahrenheit ride at Hershey park has the same problem, as to a lesser degree some other rides.

The restraint system on Intimidator 305 is a retrofit---It started as the same that is present on Maverick and the other Intamin OTSRs. I'm not sure if they can convert Maverick to the "soft pad" system because of the inversions, but I do understand the hate for the restraints, especially from those shorter-torsoed guests.

"I don't put the blame entirely on Intamin though, this coaster (my personal favourite) is the 500th designed by famed coaster engineer Werner Stengel, so even with all of his experience mistakes were made."

The inversion removal is a black eye on Intamin, and is not a one-time deal. Intamin has had some serious design issues over the past few years. The cable fraying on their hydraulic launch coasters, the additional set of motors needed for Volcano, the complete debacle of Intimidator 305's opening season, and the issues this past season with SkyRush. Intamin hasn't opened a new coaster in the US without a significant problem in years. I'm sure I'll get a lot of flack for saying that, but it's the truth. Other coaster manufacturers don't have months of tweaking requiring major redesigns after installation. Everyone aside from Intamin typically gets it right the first time, and while every coaster goes through a "breaking in" process of minor adjustments, only Intamin has seen major retracking of their coasters within a year of installation.

When is the last time B&M had to take out an inversion? Even now-defunct Arrow only had one installation that required a major restrofit (Drachen Fire). So as good as Maverick may be (I happen to like it a lot), it should be noted that the ride we see today is not the same that was designed on paper, which is not how roller coaster design should go in the 21st Century,

And let's not forget that Intamin's design flaws are not limited to roller coasters. Shoot The Rapids, anyone?

...and their drop towers (Acrophobia at SFOG and Superman Tower of Power at SFKK).

Many of us know what happened at Kentucky Kingdom, but I don't recall ever reading about an incident on Acrophobia. Can you elaborate?

There were no specific incidents, but the attraction was eventually modified to eliminate the tilt, and was closed temporarily in response to the SFKK incident.