I-Drive Live gets a new name: The Orlando Eye

December 18, 2013, 10:19 PM · Orlando's I-Drive Live development, now under construction on International Drive, is ditching that name in favor of branding itself to its main attraction: The Orlando Eye.

The 425-foot-tall observation wheel, a sibling of the London Eye, is scheduled to open with its surrounding development in a little over a year — on New Year's Eve 2014. In addition to the observation wheel, the development is slated to include a Madame Tussauds wax museum and a Sea Life aquarium (all Merlin Entertainments properties), as well as a Ben & Jerry's, an Outback, Buffalo Wild Wings and a Yard House, among other restaurants and shops.

The same developer, Unicorp, also is developing an I-Shops project on the site of the Wyndham Orlando Resort at the corner of I-Drive and Sand Lake Road.

Update: A current construction photo, of the wheel strut installation, from TH Creative: robert morris
December 19, 2013 at 2:33 AM · Titanic Exhibit & Bodies Exhibit is also moving to The Orlando Eye

The are rumored to add one more attraction

With of course Kings also adjacent with Ripley's

N B
December 19, 2013 at 6:53 AM · I hope the Orlando Eye doesn't end up looking like it does in the renderings. There are struts and cables everywhere with a huge logo at the hub on both sides.

Even the struts that connect the spokes are straight lines. The wheel at Navy Pier (Chicago) uses curved sections so it appears "round" and not a huge polyhedron.

71.46.216.42
December 19, 2013 at 5:35 AM · I can see the crane installing the supports for the wheel from my office window way over by Universal (as well as the lift hill for the Fun Spot wooden coaster - makes it hard to work when you keep watching the train go up and over all day). The Eye will be a huge "wienie" for the visitors to I-Drive because you'll see it from I-4 and the surrounding I-Drive areas.

Anon Mouse
December 19, 2013 at 8:53 AM · Orlando has lots of attractions. They don't need more, which are the scraps from Disney.

It is interesting that SeaLife Aquarium will be in Orlando instead of near Legoland. I've been to the one in Carlsbad CA where Legoland and SeaLife Aquarium are next to each other. The aquarium is rather sparse. Not ambitious. Barely entertaining.

Add the Trader Joes's going in about a mile down the road on Sand Lake and Apopka Vineland and you will have an even bigger crowd of wild eyed crazy drivers...*sigh*

That is where I-Shops is being built...Longhorn and BW3 will open soon and the massive Walgreens amongst others

Kings is where the long rumored Target was going to go

I Respond: Which is totally incongruous with the elegance and class of International Drive.

And I also agree with the other poster who commented about how much more of a cluster I-Drive is going to become than it already is. Ugh!

TH Creative
December 19, 2013 at 7:04 PM · Note to Ms. Howe and ... others, don't slip into cynicism regarding International Drive. Yeah, I offered some snark in response to NB's perspective. Shocker. But I-Drive is ABSOLUTELY a place to watch. A sizable chunk of I-Drive real estate now belongs to Universal Orlando. Wet & Wild (Universal owned) used to sit on rented land. Universal dipped into its checkbook and bought the acreage for a price north of thirty million. Over the haul it seems likely that Comcast will want to kick the attraction up a notch.

Down by Eye Drive in The Sky ... whatever the thing will be called ... new restaurants and taverns are thriving.

Don't write I-Drive off as inherently tacky ... It's got some history and a fair share of soul.

N B
December 20, 2013 at 2:08 AM · My point was the London Eye was designed by an artist, then passed off to engineers to tweak the design and actually make it work. If it didn't even move, it would still be beautiful.

The I-Sore looks like it will be built using a K'NEX set as a blueprint.

This thing will dominate the Orlando "skyline" at 425 feet. It is their Eiffel tower, Burj Khalifa, etc....

When I think of taller structures that are beautifully designed in Orlando, the Tower of Terror ride building and IOA lighthouse come to mind. I read that the height of ToT was purposely built at 199 feet to avoid putting red lights on top which are required by the FAA for structures at 200 feet and above. Now that is attention to detail. 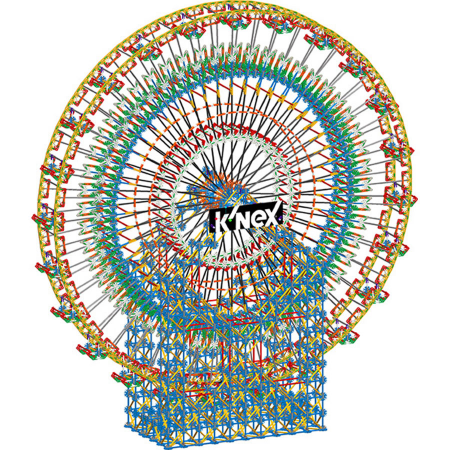 Kelly Muggleton
December 20, 2013 at 4:24 AM · N B, the London Eye is pretty gorgeous. My family are Londoners born and bred and in a taxi last night we all glanced at the eye and Mother declared 'London really is beautiful at night'. It has a real impact. Hopefully this will be even half as good!

Although even as a tourist we tend to avoid I-Drive...traffic!!!!!!!!! (We always tend to use Universal Blvd) That corner at Sand Lake will be somewhat rage inducing if those shops are going there!

I get to cross I Drive going to and from work and for a 9 mile drive, it can take at least 30 minutes in the mornings and close to an hour going home at night. Going west on Sand Lake Road in the evenings from Universal Blvd towards Restaurant Row is enough to make even the sanest among us reach for an extra large Valium. I suppose that's better than the paint ball gun I would rather use on some of the other drivers...LOL