June 12, 2014, 1:00 PM · Theme park fans appropriately give Walt Disney immense credit for the creation of the theme park industry. But fans who know their history want to ensure that Walter Knott and Bud Hurlbut get their fair share of credit, too. After all, Walter Knott had his themed Ghost Town attraction open next to his wife's Chicken Dinner restaurant in Buena Park long before Disney opened his land down the road in Anaheim. And it was Bud Hurlbut's dark rides for Knott's Berry Farm that first fully demonstrated the potential of what a theme park attraction could be.

But even masterpieces need a little TLC now and then. Last year, Knott's owner Cedar Fair brought in Garner Holt Productions to refurbish Hurlbut's Timber Mountain Log Ride with modern animatronics and lighting. The work breathed new life into the experience, allowing young (and new) theme park fans to better understand why a previous generation fell in love with the Log Ride.

This year, Knott's turned its attention down the pathway in Calico Square, bringing back Garner Holt Productions to refurbish Hurlbut's original masterpiece, the 1960 Calico Mine Ride. 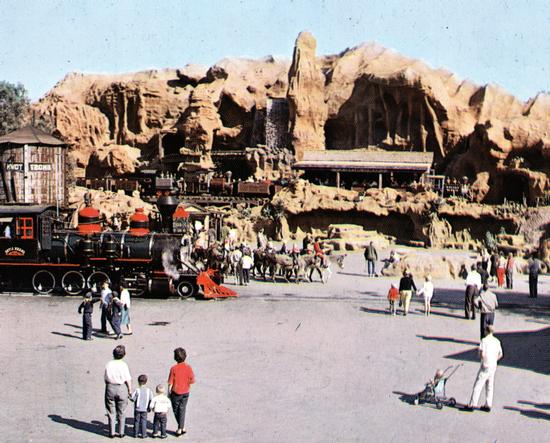 The Calico Mine Ride in the 1960s. Photo courtesy Knott's

The Calico Mine Ride elevated "dark rides" beyond flat tracks in boxy rooms filled with painted cutouts. Hurlbut built a mountain for his Mine Ride, then sent ore-car trains deep within it, where they would see and hear three-dimensional, life-sized miners working in a practical, three-dimensional "underground" space. As Garner Holt said during today's reopening ceremony, kids then really did believe they were going through an authentic mine — Hurlbut's work was so convincing.

The latest refurbishment should rekindle that sense of awe. No, there's no movie-franchise IP here. But with state-of-the-art animatronics, clear new audio, fresh lighting, and even some nifty special effects enlivening an already-engaging setting, Knott's Calico Mine Ride should regain its old — and rightful — position as one of the world's leading dark rides.

Knott's also today honored another of its past innovations upon the 30th anniversary of the opening of Camp Snoopy, the first themed children's land in a theme park. Cedar Fair has shown its TLC for this land over the past months, too, with new decor, surfacing, and fresh landscaping throughout, plus three new kiddie rides for families to enjoy. Here are some video highlights from this morning's opening ceremony, as well as shots of the new attractions in the land:

In addition to the area improvements, here is what's new in Camp Snoopy: 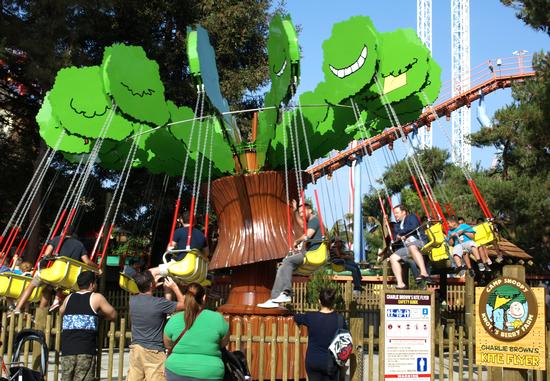 I especially liked the "flipbook"-style effect on the top panels of the new Kite Flyer waveswigner ride, which animate the "kite-eating tree" at work. It's a little touch — one that many visitors won't notice — but that's the type of extra detail that long has distinguished the leading parks in the industry.

And that's not all. In his remarks at the reopening of Camp Snoopy, Knott's Vice President and General Manager Raffi Kaprelyan promised "more interactive and cutting-edge fun in 2015" in the park's Boardwalk, the site of three new family rides last year, as well as one underutilized old dark ride building that's just begging for a new attraction. Could that be the site of Kaprelyan's promise?

The Calico Mine Ride is the first themed attraction I remember visiting when I was a kid living in SoCal - even before my first visit to Disneyland. Kudos to Knott's and Cedar Fair for restoring this classic dark ride. I have no choice but to plan a return visit to SoCal and this time, a stop at Knott's is a must!

I really like the Calico Mine Ride! I rode it last year & forgot how cool it was. Glad its opening back up & that Knotts, with all its roller coasters coasters, still focuses on it's "themed" attractions.

The rumored dark ride is what I'm looking forward to. I love seeing Knott's restored to its former glory. This park was neglected way too much.

What needs to be fixed in the entry Marketplace. This assortment of shops and restaurants is very lame. The stores sells plenty of outdated merchandise that I don't want.

They need to fix the park lot pricing. The 3 hour grace period for the first 3 hours at the Marketplace is revoked. The daily rate for the theme park is way too high for locals. Perhaps they should sell a locals parking pass for those that own annual passes.

Looks very good. Too bad Disney didn't use a setting like that for the 7 Dwarfs Mine Ride. That could have been a great ride with 7 Dwarf & cast animatronics throughout the mine.

Knott's Mine Ride is much longer than the Seven Dwarf's ride. The Dwarf's indoor part should have been longer.

Imagine the Seven Dwarfs Mine Ride with the scope and scale of the Calico Mine Ride! One of the things that bothers me, in terms of storytelling, about the dark ride portion of the Seven Dwarfs Mine is that it seems backwards to me. It should have started with the dwarf ringing the work bell, the call of "Hi, Ho" and the animated images of the dwarfs projected on the walls and then turned a corner to see all the dwarfs working in the mine. The way it stands now, I thought the dwarf ringing the bell was signaling "lunch break."

I was also at this event today, and I have to say that Knott's has done a terrific job with their 2014 additions. The new Camp Snoopy additions are great. The entire north end of the area has been redone and now feels more like a wilderness area, and although the three new rides are just stock Zamperla attractions they are nicely themed to blend into the area.

As for the Calico Mine Ride, I knew it would be impressive based on what happened to Timber Mountain Log Ride last year, and I was right. I would say the ride is now at least as good as a D-ticket Disney attraction and has gone from being I ride I liked, but didn't necessarily ride every visit, to one of my top three attractions in the park (along with the Timber Mountain Log Ride and Xcelerator). Great job Garner Holt and Knott's Berry Farm!

I can't wait to see what is coming next year. Based on hints dropped today and recent sightings in the area, I've got a feeling some type of dark ride in the former Kingdom of the Dinosaurs space is a very likely possibility.

Heigh Ho signals the dwarfs that the workday is finished, not beginning or lunch breaks. Thus the lyrics "Heigh Ho, Heigh Ho, it's home from work we go!"

Agree with previous posts that this 50 year old attraction puts the brand new 7 dwarfs mine train to shame.

Amazing. Here we are celebrating a fantastic refurbishment of a classic dark ride and we have to descend into sniping about Disney's 7 Dwarves Mine Train -again- an attraction on the other side of the continent. How can I say this politely? IT'S NOT THE SAME ATTRACTION!!! Disney did not set out to create "7 Dwarves of the Caribbean" - they set out to create a family coaster with an indoor segment, but the emphasis was always on the coaster part - and again I emphasise FAMILY coaster.

Can't we just get over the fact that Disney didn't spend billions on creating 'Harry Potter and the 7 Dwarves' and enjoy what they did create instead and whilst we're at it enjoy these other, very different, classic rides. Credit to Knotts Berry for such a fine refurbishment. But let's not kid ourselves that they'd have built it from scratch.....

Congratulations to Knott's Berry Farm on a job well done! Looking forward to more improvements in the near future. Maybe something along the lines of Space Mountain or Toy Story Midway Mania? Something similar, but different.

This story is so nice in so many ways. First, it's up to Robert's usually high standards: a breezy read, informative but not too long, with a great ride-along video to boot. Second, it shows the new management in charge of Cedar Fair recognizes how special and unique Knott's Berry Farm is, and is spending the money and effort to polish classic gems until they shine once more. And, finally, it reminds us how, once upon a time, a fellow named Walt didn't have to have a Disney after his name to be widely recognized by families for delivering a high quality, entertaining place to spend the day.

Disney World tweaks its Fastpass+ line-up, but our advice for using Fastpass+ remains the same