Where to Eat: Breakfast at Tusker House in Disney's Animal Kingdom

March 17, 2015, 9:29 AM · Breakfast is frequently regarded as the most important meal of the day. That can be even more important when you plan to walk around one or more theme parks for hours, logging miles upon miles on your Fitbit (or Apple Watch, in a few weeks). Getting a good meal to start the day can be a critical decision in planning a successful theme park day. Many people may choose to eat some cereal, fruit, or granola bars in their hotel rooms, while those staying off-site may choose to take advantage of their hotel’s breakfast buffet. Those at an on-site Disney resort hotel may grab breakfast at their resort’s food court or sit-down restaurant. However, an increasingly popular way to enjoy breakfast at Walt Disney World is at a Disney Character breakfast. There are restaurants all over Walt Disney World that offer breakfast along with an early chance to meet your favorite characters. One of the most popular, and frequently documented, is Chef Mickey’s at Disney’s Contemporary Resort. We’ve experienced that meal on a previous trip and really enjoyed the early morning character interaction and wide variety of options on the buffet.

However, those who want to not only get an early character interaction, but also a chance to enter the parks before other guests, reservations at an in-park character breakfast, before rope drop, can give guests a great start to their day. At Disney’s Animal Kingdom, Tusker House offers an excellent in-park character breakfast, and has the bonus of being directly adjacent to one of the few attractions in all of Walt Disney World where experiencing first thing in the morning can offer a significantly better experience than later in the day. Tusker House is located in the Africa section of Animal Kingdom near the new Festival of the Lion King Theater and just a short walk from the entrance to Kilimanjaro Safaris. 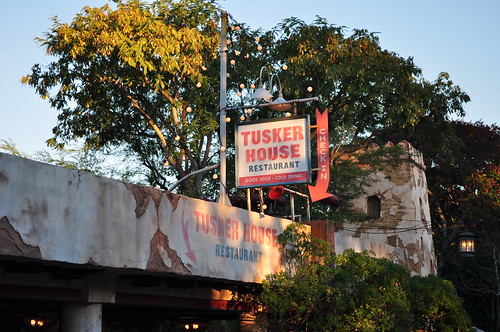 Guests with pre-park-opening reservations at Tusker House are allowed into the park before opening by providing their name to a cast member with a reservation list near the front of the park. Guests then walk to the restaurant in the virtually empty park, past cast members preparing for the day. I’ve always found it interesting to walk through a nearly deserted park, particularly in early morning hours as you can feel the quiet and slow build as the park “wakes up.” At Animal Kingdom, it's even cooler because not only are rides and people quietly preparing for the day, but the unpredictable animals are as well. Once crossing the bridge into Africa, Tusker House is located to the left, and guests check in at the host stand. After just a few minutes, our family was called to be seated. Like many character meals, guests can take a photo just before entering the dining room, which can be immediately linked to you PhotoPass account with a quick tap of your Magic Band. Once seated, guests are greeted by their server who takes the drink order and explains how the buffet and character interaction works. Drinks include a special “Jungle Juice,” which is a mixture of orange, guava, and passion fruit juices, and reminded me of a juice mixture that is a common breakfast drink in Hawaii. Like virtually every Disney character meal, guests stay at their table and the characters rotate around the room. Depending upon how full the dining room is, and the time you’re seated, it typically does not take more than 30-45 minutes to see all of the characters. At Tusker House, the characters are Mickey and his friends in their safari outfits. The dining room is not overly large and is divided into smaller seating areas that make the character interaction seem more intimate. 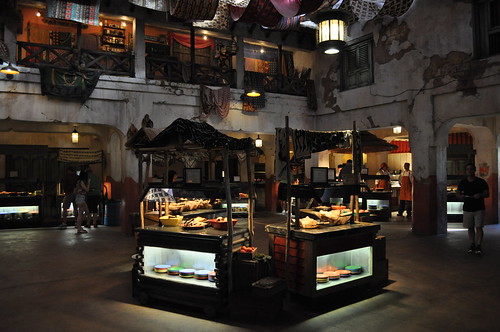 The food is where Tusker House shines. The selection includes many of the expected selections like eggs, bacon, sausage, cereal, and fruit. 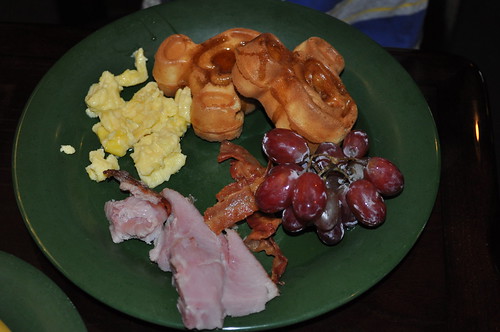 However, if your family is willing to be a bit more adventurous, the buffet will provide a cornucopia of options. There’s an amazing collection of breads, cheeses, and spreads along with two varieties of bread pudding. 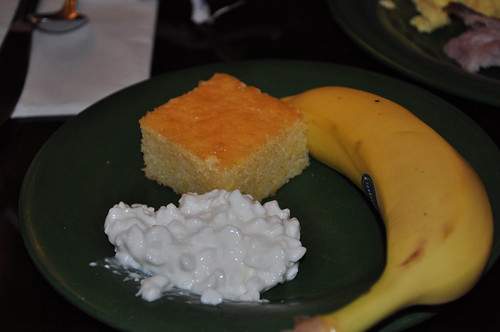 There’s a full station devoted to yogurt and every imaginable topping. If that’s not enough, there’s another section of the buffet devoted to more unusual items like yam casserole, bobotie, corned beef hash, and blintzes. Guests could easily fill four or more plates with a small portion of each item and still have a dozen or more selections to try. As with many buffets, food quality can vary depending upon how fresh the item is. I felt that the bobotie (similar to a Shepherd’s pie but with a cornbread crust and more spices like cumin, cardamom, and nutmeg) was not as good as what is served at Boma, a non-character African-inspired buffet restaurant at Animal Kingdom Lodge. However, the blintzes were particularly tasty, and the fresh mini-donuts were addictive. As you would expect, service at Tusker House is brisk and efficient, and we were able to get our fill and meet all of the characters at a comfortable place in under an hour, which got us onto Kilimanjaro Safaris just before the huge rush of guests as the park opened. For an attraction that is best experienced first thing in the morning, our pre-park opening Tusker House reservation gave us a chance to ride the attraction without a much of a wait (about 3 minutes to load, including walking through the queue). However, not only does the pre-park opening reservation at Tusker House get you in the park early, but the food really stands up, and I would recommend the restaurant for breakfast even if you’re not trying to get into the park early. As with most character meals, it can be a bit pricey (about $30 for adults and about $16 for kids, depending upon season), but the costly price can be marginalized a bit through the use of the Disney Dining Plan. If I were to choose between Chef Mickey’s and Tusker House for breakfast, I would choose Tusker House every time. 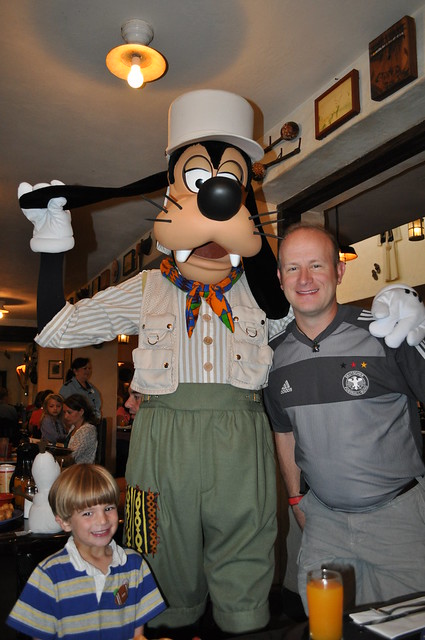 Amanda Jenkins
March 17, 2015 at 11:54 AM · Tusker House is a great place for breakfast. One of my favorite items is offered here, the strawberry tart. I agree that for food and atmosphere, it is better than Chef Mickey's.

Sven Leichsenring
March 17, 2015 at 12:27 PM · Sweet Germany jersey you got there. Didn't really have the money to reserve dinner when I visited last summer, but all these great restaurant reviews make me excited for my next visit. So much stuff still left to see.

64.30.99.91
March 17, 2015 at 7:37 PM · The "Jungle Juice" is almost worth the trip by itself. The one thing that was a distraction to me was the noise level. The place was just plain loud once it filled up and made an otherwise decent breakfast less than fully enjoyable. On the last visit we made, our reservation was at the same time as park opening and they would not accommodate us going in early so we had to wait in the regular queue for park entry. I had really hoped on getting in 15 to 20 minutes of picture taking on the way in, but it was not to be. Not sure if it was a fluke or not, but it didn't appear that any breakfast people were getting in early that day.

Russell Meyer
March 18, 2015 at 9:17 AM · The noise level inside didn't bother us too much. It was pretty similar to other Disney Character meals, maybe even a bit quieter in fact. We entered the park almost an hour before park opening, with a reservation at 8:20 AM. The dining room was about half full when we were seated, but was just about full when we left, so perhaps that affected the noise level. They deliberately stagger seatings in the first hour so that guests aren't waiting around for characters, so I could see how a full dining room may seem loud, especially later in the morning when many of the children get going. I have noticed that really early morning breakfasts at WDW can have a very sleepy atmosphere, while eating later in the morning can bring out that rambunctiousness in everyone.

Perhaps you weren't talking to the right cast member to enter the park early. At all of the parks, there's typically a cast member at one of the gates to the far left or far right specifically designated to check in guests with pre-park-opening dining reservations. As the plazas fill up with anxious guests waiting to get in 30 minutes or less before rope drop, those cast member can be tricky to find. Asking a turnstile cast member may ultimately result in being directed to the back of the line, because those cast members are being bombarded with questions about whether their line is open, when the park will open, and all kinds of other redundant questions. If you're unsure of where the advanced dining reservation cast member is, talk to someone in a booth, someone who looks like a supervisor, or speak to the turnstile cast members at both ends of the entry gates.

Tuna MD
March 18, 2015 at 7:21 AM · Love Tusker House breakfast. interactive, good food, and characters. what more could you want.

Gabriel Schroll
March 21, 2015 at 12:24 PM · I've never eaten at Tusker House for breakfast, but I've been there for dinner quite a number of times and it's outstanding! I always get a picture with one of the characters. Last time it was Daisy Duck. :p

Breakfast is tricky for me because I just don't feel like I'm getting a good deal when it's scrambled eggs, waffles, sausage links, and juice/milk/bad coffee.

Though I admit it doesn't look too bad, I don't see myself eating there for breakfast. Perhaps once Avatarland opens, we'll be able to eat "blue eggs & ham". Lol.