A visit to Shanghai Disneyland, part 2

October 19, 2016, 12:49 PM · In this week's episode of Theme Park Insider, Robert and I continue our discussion about my recent trip to Disney's newest theme park, Shanghai Disneyland, including getting evacuated from Pirates of the Caribbean, riding the TRON Lightcycle Power Run and the rest of my day at the park. (If you missed part 1, here it is.)

It's hard to capture the grand scale of the entrance to Shanghai Disneyland's Tomorrowland, on elevated walkways, heading toward TRON, housed in a huge structure that looks like something between a giant airplane hangar and a billowing parachute as it reaches the ground. 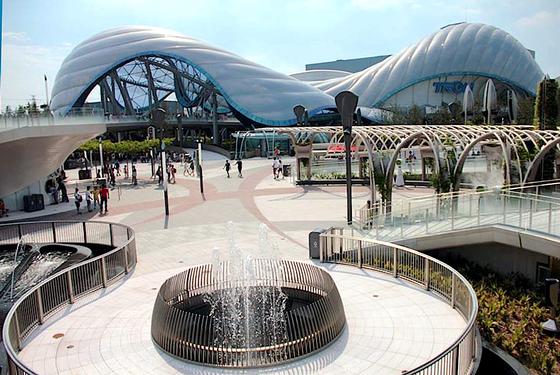 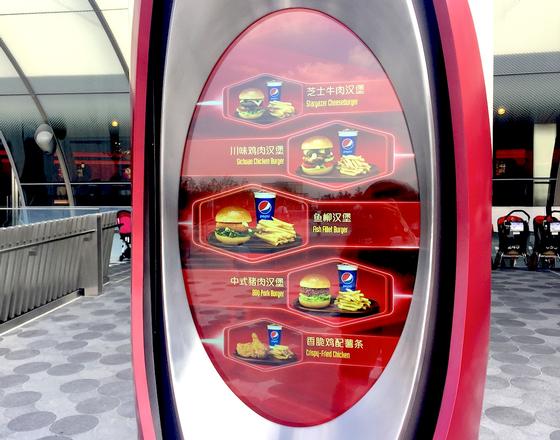 Lately I have not been a fan of roller coasters because of the inevitable headache that I get after being knocked around on them. So I was definitely not going to go on TRON Lightcycle Power Run, billed as "one of the fastest roller coasters in any Disney park." But once inside that giant blue tent, I just couldn't resist. I packed my possessions away into a locker and then got in line, which got darker and bluer as we descended onto the loading dock. Then I climbed aboard this crazy motorcycle-like seat with a very different restraint system than anything I've come to trust. Instead of a seat belt, or a harness that goes over your shoulders, this one has you kneeling into something that kind of takes hold of your legs, and then a metal flap goes down on your back. Except it's kind of a moveable flap. Am I supposed to just "hang on"? Too late now!

The way this thing ramped up at the beginning was SO dramatic, with music and blinky blue lights enhancing the feeling of going faster and faster until it just shoots off, going outdoors and indoors, up and down and around, with the music continuing throughout. It was a really fun ride, and no headache! You do have to be able to hold up your head, there is nothing to lean on. But in my case, this was better than having my head rattling against the back of a seat.

Next came Buzz Lightyear Planet Rescue, a ride in which one racks up points for shooting at the "Z" -- that symbol for the Evil Emperor Zurg. The times I've done this ride with my family at Disneyland in California, I always lose; somehow I never can aim the light gun. These were somehow much easier for me; I could really see the red laser coming out of my gun, thus, I could actually aim it! I still got the lowest score in my group, but at least it was an "honorable" score!

As we left Tomorrowland, the Mickey's Storybook Express parade was making its way around the park. All the familiar Disney songs were in Chinese, of course, and most of the familiar Disney characters were also Chinese. No lack of talent here, some great dancing, gymnastics and tricks, playing with the crowd, all good-natured and fun. 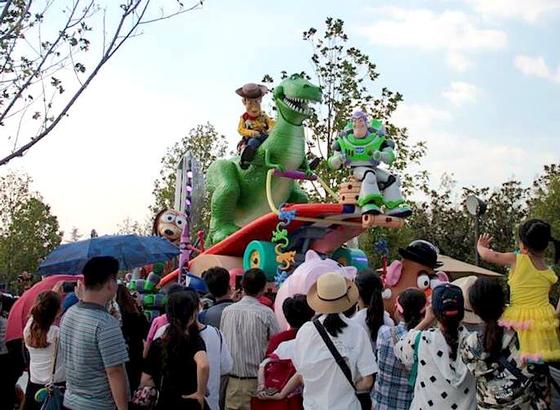 By this time, we wanted ice cream, we were feeling hot! There is no ice cream place, that we could find, if you want ice cream, you get an ice cream bar. Of course, a Mickey Bar is a very good thing! (Robert later told me that we simply failed to find Il Paparino, which has sundaes and cones, though I'd rather have a Mickey Bar than soft-serve!) 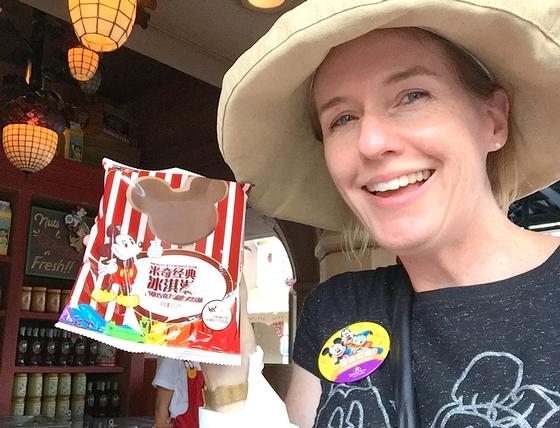 We thought we'd check the wait time for Roaring Rapids — it was posted at 75 minutes, and that just seemed like a long time to wait. I do wonder if it really would have been that long, but we did not end up riding Roaring Rapids.

We decided to return to the Enchanted Storybook Castle and try the Once Upon a Time Adventure, a walk-through inside the castle. We were hoping for big views from castle windows, but there were no such windows. The walk-through tells the story of Snow White through a series of displays with special 3D effects. Watching the first scene, with Snow White singing (in Chinese of course) at the well, I noticed that her song, which is from the movie, is very high-pitched and warbly. It made me think of the Chinese Kunqu traditional opera that I'd heard just a few nights before, with its very high-pitched and highly fluctuating intonations. I wondered if Snow White's rather old-fashioned and warbly way of singing is more appealing to Chinese culture than some of the other princesses. 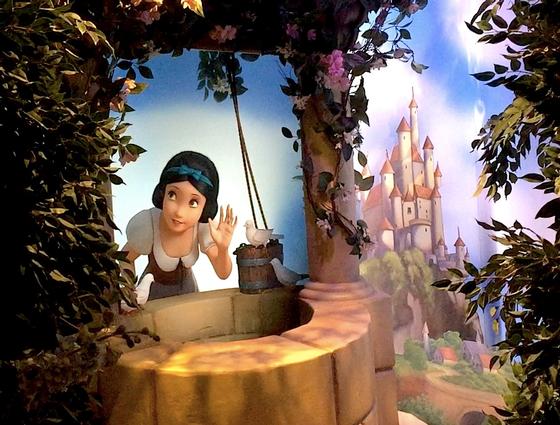 Our last attraction of the day (after checking Pirates one last time and being disappointed that it was still closed) was the Tarzan show. It was really original, impressive, and terrifying to watch. OSHA does not rule in China!

It opens with a moving picture, projected onto the four walls of a curtain hung in the center of the stage — kind of a big cube that looks a little like a giant lantern. It depicts the story of Tarzan's birth, the death of his parents, his adoption by the gorillas. The curtains rise, then we have a stage show, full of stunts, many of them done by a troupe of dancers dressed as monkeys. Tarzan and Jane do the most daring stunts though, dangling from rings and silks, some 30 feet in the air, with no harness that I could see, no net below. But they were highly competent and it was thrilling to watch stunt after stunt, some stunts done by individuals, and other stunts done with a group. 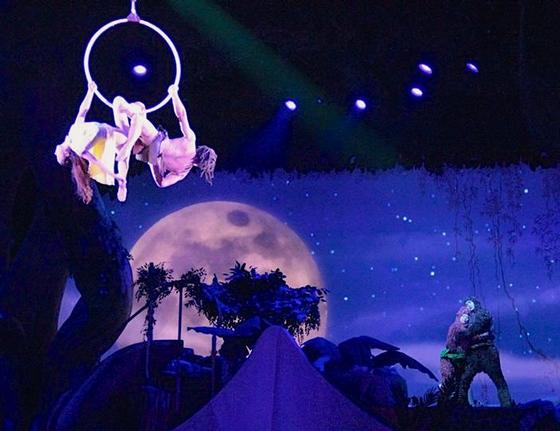 Our last stop was at the park's main Chinese restaurant, the Wandering Moon Teahouse. This was a lovely place to eat, with beautiful lighting — Chinese lamps and other lamps that looked like fish — but it was not the best food we had. I had the "Eight Treasure Duck" with Wandering Moon Tea. The tea was good, but the duck, which came wrapped in a large lotus leaf, really did not taste good. The rice was nice and sticky, but the duck itself — I even wondered if it was duck. It just didn't appeal. The Wagyu Beef Noodle Soup, however, was much better. 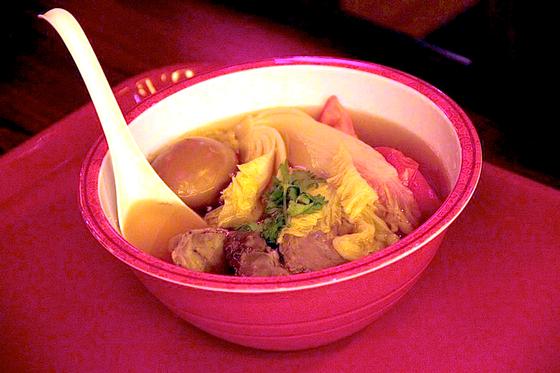 On our way out, we looked at the Avenue M Arcade for some gifts to bring home. This was the first time anything felt crowded. I found some nice T-shirts for my family, but be warned, if you are an average-sized American, you are probably a size XL or XXL in Chinese clothing!

Transportation was actually very straightforward, coming home. There was a taxi stand, with some 30 taxis lined up and waiting. As always, I carried with me a card with the name of my hotel on it, written clearly in Chinese. You don't want to get lost at the end of the day!

Nice trip report. I would love Tron to come to the US. This ride is a winner. The Snow White singing style has nothing necessarily to do with Chinese preference. I do think the innocent portrayal of Snow White is how most Chinese prefer to see their young daughters. You should stick with western food. The Chinese food is really for the Chinese.

The taxi stand is very organized, as she mentiones in the video. But I used it on my second day at the park (and the second day of it actually open to the public) and the lines were indeed huge! Over an hour to get a taxi to my hotel...
So keep that in mind if you're leaving with the rest of the crowd at park closing

Was the park really as empty as it seems in the pictures?