April 7, 2017, 10:44 PM · WILLIAMSBURG, Va. — Big things can come in small packages, even in the ultra-competitive world of roller coasters. With the introduction of InvadR, Busch Gardens Williamsburg has demonstrated that you don't need to break any records to create a world-class thrill ride.

I was invited by the park to represent Theme Park Insider at the coaster's media day, but all opinions presented here are my own. InvadR is the first attempt by Busch Gardens Williamsburg at developing a wooden roller coaster. The installation, designed and built by Great Coasters International (GCI), has been a multi-year process that went through various tweaks, redesigns, and adjustments. Busch Gardens even allowed fans to vote on certain aspects of the ride, including the name and logo, as part of a year-long social media campaign initiated at the beginning of the 2016 season. This morning represented the culmination of that effort.

InvadR's stats are nothing extraordinary, and most coaster aficionados may even dismiss this as a kiddie coaster at first glance. In fact, one of the goals the park and designers had with this ride was to bridge the gap between the few moderate thrill rides in the park with a 42" height requirement and the larger roller coasters like Verbolten and Loch Ness Monster that have a 48" height requirement. InvadR falls in-between with a 46" requirement, but the forces generated by its nine airtime hills and various twists and turns are definitely not what I would call "kiddie."

Riders board refurbished Millennium Flyer trains that were formerly used on Busch Gardens Tampa's Gwazi. As Jonathon Smith, Corporate Director of Rides and Engineering for the chain said, "Gwazi now lives in Williamsburg." He pointed out that the park took pride in reusing what they could from what is now a standing but not operating (SBNO) coaster. They even reused parts of the lift mechanism and chain from the Tampa coaster. The trains feature a very open seating design that's quite easy to enter and exit. The only restraint required is a simple lap bar that contours to fit snugly around your waist. The two trains feature eight rows with a maximum capacity of 16 riders per train, but each train has its own personality – one with a dragon motif (representing the invading Vikings) and the other with a carved wooden bear (representing the defending villagers). Smith also noted that the park and GCI collaborated to delicately weave the track through the existing Le Scoot Log Flume and train tracks to create a custom layout that went through a number of iterations before the final design was approved.

While theming on the coaster course itself is limited, the station, queue, and ride entrance are well themed, while still fitting in with the surrounding New France area where the coaster resides. The entrance is particularly well done with guests passing beneath a giant Viking war machine that has taken numerous hits from villager arrows. 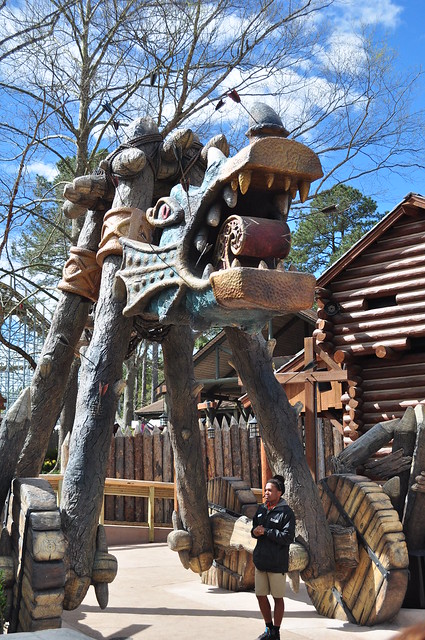 The coaster itself starts with a quick drop out of the station and turn up to the lift hill. Once at its highest point, the train then takes a slight left turn and then plunges down a covered drop. At the bottom of the 74-foot hill, the track passes through a second tunnel underneath a maintenance road and back up into a right hand turn. The coaster continues around a semi-figure eight circuit with lots of subtle hills and drops. No one single drop seems all that impressive from the surface, but once the train passes over the sequence hills and turns at full speed, guests are treated to a flurry of airtime and g-forces that are far more intense than I expected. The timing on the individual elements keeps guests guessing, as the smaller bunny hills provide far more airtime than you would expect on a coaster of this size.

The trains definitely enhance the enjoyment of the coaster with plenty of security, while giving guests enough freedom to move their upper body without banging into parts of the train. The one drawback of the ride is that it's over rather quickly, but perhaps it's better that a coaster leave guests wanting more instead of spending the last half of the course burning off speed in relatively boring maneuvers. I was also hoping that some of the theming elements would extend onto the track (possibly in the tunnels), but considering how quickly the train passes through each of the hills and turns, it would be difficult to create elements that guests would notice and/or care about. The ride can be over in a blur, particularly if it's your first time. 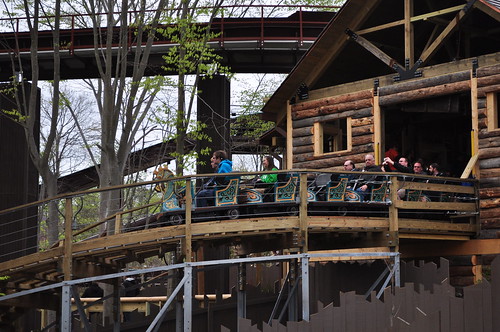 I have to admit that I was a bit skeptical that a coaster with rather modest stats could deliver an enjoyable, intense experience. However, InvadR is far more than the numbers would indicate yet is approachable for even the most timid guest. Even with record-breaking roller coasters steps away, InvadR brings a unique experience that is every bit as fun as the other world class coasters in the Busch Garden Williamsburg collection and shows that big things can be found in small packages.

Chad H
April 8, 2017 at 2:32 PM · That looks like a great woodie. I was feeling pretty dismissive at the small lift hill, but seemed to hold a great pace through the run.

AJ Hummel
April 8, 2017 at 4:49 PM · Looks like GCI has delivered an excellent family wood coaster that perfectly fills a hole in BGW's coaster line-up. While this isn't something that most would travel for, it does look like a fun ride and I'll definitely give it a try next time I visit the area.

Rob McCullough
April 9, 2017 at 9:14 AM · Bigest, tallest, fastest, longest, "most-est" are not adjectives ever needed in describing the "BEST" of anything. There will always be something built down the road that will exceed any "est" that is built today. What matters most is the total package. Sounds like BGW has a winner here.