Disney's first theme park outside the United States officially broke ground on its 2020 expansion project last April. But full-scale construction had to wait until the Star Jets ride closed last month. Now, the construction crews can move into place to begin removing the Star Jets and get to work on building several new attractions for the park.

Tokyo Disneyland's Tomorrowland will welcome Disney's first theme park ride themed to Big Hero 6, featuring a spinner ride that in function looks a bit like Mater's Junkyard Jamboree from Disney California Adventure's Cars Land... except that the lead cars are driven by Baymax. In addition, Toontown will get a new Minnie Mouse meet and greet attraction, and a new Broadway-style theater will go in between Fantasyland and Tommorowland, similar to the new theater that Walt Disney World's Magic Kingdom is getting on its Main Street.

But the biggest project in the expansion is a new Beauty and the Beast-themed mini-land for the park's Fantasyland. This area will feature a new trackless dark ride themed to the 1991 animated classic.

The new attractions are scheduled to open in the spring of 2020, just in time for the Summer Olympics that will come to Tokyo that July. 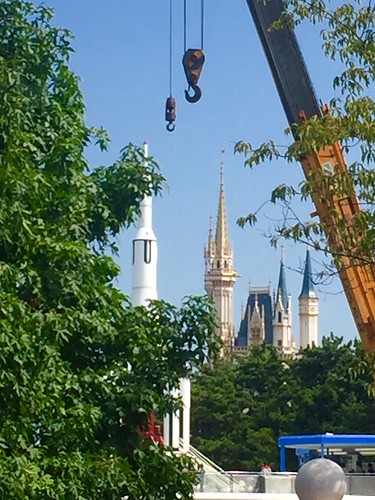 Robert Niles
October 27, 2017 at 10:11 AM · Nice! Can't wait to see these new attractions as well as the Super Nintendo World coming to Universal Studios Japan in Osaka that summer, too.

82.12.117.88
October 29, 2017 at 3:53 PM · Why is Tokyo Disneyland getting another trackless ride in the same park as Poohs Hunny Hunt? Ridiculous. They should have put in in DisneySea instead, maybe in Mediterranean Harbor.

Daniel Galvan
October 31, 2017 at 10:11 PM · DisneySea has a trackless ride aswell: Aquatopia. Mediterranean Harbor will be getting a version of Soarin'.

Marvel Summer of Super Heroes comes to Disneyland Paris in 2018