Yeah, that sounds like an awful idea, at first. No one wants to be trapped in a sinking sub, wondering when your air is going to run out. That's not a theme park ride. It's a nightmare.

That's what a company called Sub Sea Systems is offering with its new ride system, the Aquaticar, that it will show at an upcoming trade show in Dubai. 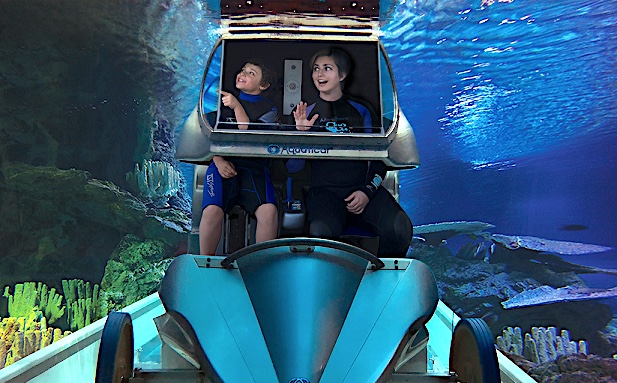 The two-person cars have height adjustable seating and a waterproof canopy that covers the riders' upper bodies, providing an air bubble for them during their underwater adventure. The car descends into an underwater pool, through which drivers drive on an customizable track as they go through any variety of environments or show scenes. Guests can steer the vehicle, but can't go off the defined track. 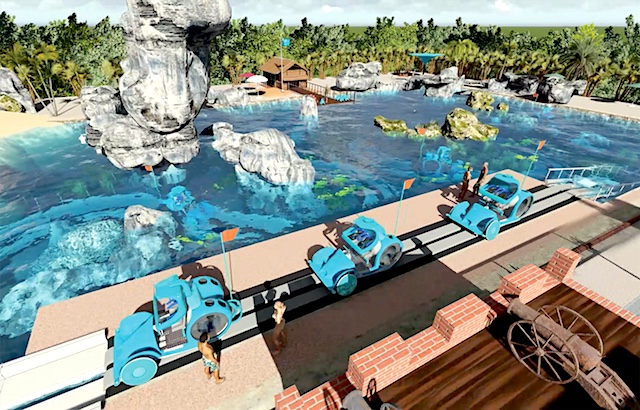 The propulsion system for the ride is pretty neat, too. Air registers embedded in the ride track release air into the vehicle as it passes over. That airflow not only fills the canopy, it also powers the car's "Bubble Engine," turning the car's wheels for a ride speed of about two miles per hour. 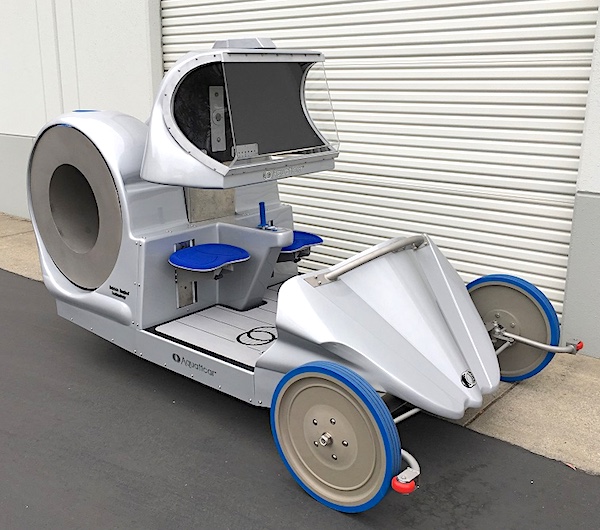 As a "wet" ride, the system likely would fit best at a water park that's looking to blur the lines between it and a theme park experience. (Oh heavens, I would love to see what Universal Creative could do with this at Volcano Bay.) But with two-person vehicles, a slow ride speed, and self-driving, the capacity on this likely pushes it toward an upsell or limited-attendance-park experience. That said, with the right designed environment to explore, this looks like a supremely cool experience, especially for kids.

Sub Sea Systems is showing a model of the Aquaticar system at the Dubai Entertainment Amusement and Leisure show, April 9-11 at the Dubai World Trade Center.

this would be an amazing Harry Potter tie-in! Recreate Harry's swim through the lake for the 2nd task.

"Hey, lets submerge guests 2 at a time in a bubble of air where the vehicle is connected to a track with no escape hatch to the surface."

I can see it now when a vehicle first goes under and then a guest freaks out and tries to swim to shore. I think it's very clever, but when you have to design ride systems to be safe enough for the dumbest people on the planet, something like this screams like a lawsuit just waiting to happen. Even if they restrain guests in the vehicle, there's liable to be someone that panics and either injured themselves or the person riding with them.

So you'd need to be able to swim and sign a release a la a dive helmet or SNUBA-type experience. (Apparently, the person who runs this company was a co-founder of SNUBA.)

Given the capacity, likely price point and need for some, uh, legal flexibility, I think these guys picked the perfect place to show this - Dubai.

If you have to go through all the trouble to sign a release and have to be able to swim, what's the advantage of this over SNUBA or snorkeling? I guess you could create a ride program that is part of an overall show or story, but I just don't see the application here. Perhaps as an upcharge or new attraction for a park like Discovery Cove?

I'd much rather have Shark Reef at Typhoon Lagoon back.

When I was in the army I was an YPR drive. Because the thing also could float (and sink) I needed to learn to dive with a special system that doesn't produce bubbles (so enemies won't see you). During the training a guy got a panic attack and almost drowned. We had to sit in a tank that was submerged in a pool and took water fast.l It was very claustrophobic and you had to put your gear in place fast.
I think a regular guest, without diving experience, could get a panic attack. I'm sure (or at least hope) divers are standby but that makes the ride very expensive to run and a problem creator.

This will have to be an extra charge attraction. The passengers have to self select for the experience. It won’t be cheap either. I can imagine $15 to $25 per ride. It requires a change of clothes and a tutorial on safety.

They were at IAAPA showing this off. So many liability and logistical issues to work out. Neat concept, just don't see anyone picking this up anytime soon, not without some major changes.

Next should be Walt disney world
in Florida. wetsuit or bathing suit.

Interesting idea. But they'll never do this in the states, with the potential for a huge lawsuit if someone were to drown. It would really need a failsafe so that people can escape it, should something go wrong, without being Houdini.

Wait, Shark Reef is gone?.... I don't see an issue if people sign a release form. Kind of like skydiving. Sign saying, "yes I could die doing this".

The Aquaticar ride system does not require guests to have swimming skills, similar to our Sea Trek helmet diving system (54 worldwide locations). Minimum age is 5. The canopy of the vehicle is approximately 2 feet beneath the waters surface at typical maximum touring depth. Multiple redundant air supply systems are provided for propulsion and air supply to the canopy. Additional redundancy is provided via an air cylinder located under the hood of the vehicle. A pneumatic inflatable bladder is also built into the vehicle which will raise the vehicle to the surface in case of an emergency. Each Aquaticar is equipment with a VHF radio where the antenna always remains above the surface. Ride duration is between 3 to 4 minutes (depending on track length) and capacity per hour is approximately 300 - 500 guests (also depending on track length and quantity of vehicles). Safety is paramount in our product designs of over 35 years. Jim Mayfield, President - Sub Sea Systems, Inc.

I think this would be a perfect ride to show case the MEG books and film coming out next year. An underwater ride themed to the Megalodon shark of prehistoric times, and one of Steve Alton's books Hell's Aquarium. Where the Megalodon is captured and put in the Aquarium in Dubai and the park sees this perfect way to show off the shark and something as usual goes terribly wrong.

Why don't they just build a car that covers the whole body?

Why don't they just build a car that covers the whole body?