March 23, 2018, 2:10 PM · (*Updated) For the last two years, a not so great wooden roller coaster laid dormant in the Central Virginia Countryside. Hurler, the bumpy and generic homage to an SNL skit gone prime time, slowly had its brown wooden frame trimmed back, only to rise again to new heights with a sleek and smooth orange track. Twisted Timbers, Kings Dominion’s newest roller coaster, has been resurrected from the Hurler’s remains, and goes to show that size doesn’t always matter.

For a park that already has a roller coaster topping 300 feet, and another with speeds exceeding 70 MPH, it’s clear Kings Dominion didn’t feel the need to break any records with its Rocky Mountain Constructions’ creation. Instead, Twisted Timbers builds on the original Hurler layout and maximizes every ounce of inertia that is generated over the 3,361-foot-long track. With a height of 111 feet and top speed of 54 mph, the casual coaster counter might dismiss this somewhat diminutive ride. After all, RMC is about to debut the world’s first hyper hybrid roller coaster at Cedar Point later this year with Steel Vengeance, and RMC has already build some impressive speed machines including Goliath (72 mph), Lightning Run (73 mph), and Iron Rattler (70 mph). RMC has also designed coasters with steep, near vertical drops and death defying inversions. Twisted Timbers does have one of those death defying inversions, and it hits riders right on the first drop. No, this isn’t like the Jo-Jo roll on Hydra out of the station that acts more as a take a penny jar for the ground below, this is a barrel roll down the longest drop on the coaster. 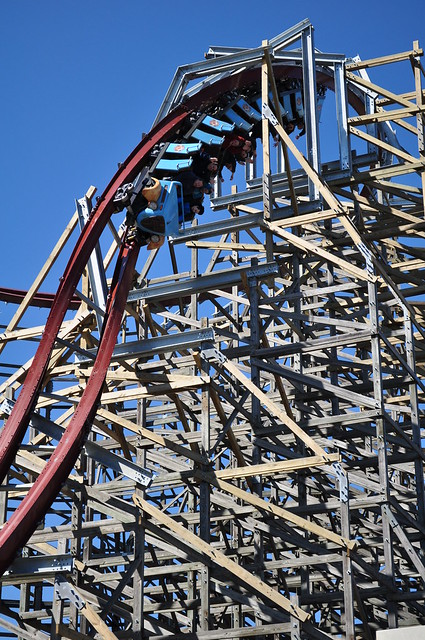 Even though it is the most unique element, that diving barrel roll is just the start of an incredible ride. But boy, it is executed to perfection, and is consistent from front to back. There’s just enough of a dip at the top of the hill that the tractor-themed trains gain enough speed to give virtually every row a pop of air as the coaster train careens down the drop. The result is riders getting popped out of their seat and then spinning head over hills as the train accelerates. It’s like a B&M zero-g roll on steroids, and that’s only the ride’s first maneuver. After reaching the bottom, there’s a very small bunny hill that gives another pop of air before a sweeping overbanked right turn. What follows is one of many trick-track style elements that are scattered around the course. These are not the classic wooden trick-track elements where designers deliberately misaligned the track to create a bump, these elements are smooth yet jolting changes of direction that lift you out of your seat and to one side. Luckily, the molded seats and snug lap bars, in combination with shin pads, are well designed to allow riders the freedom of movement along with the security and comfort.

After that first trick-track element, the coaster goes through three floating airtime hills, each ever so slightly smaller. The amount of airtime generated by these three hills alone could rival some steel hypercoasters. The coaster then takes a turn to the right into its second inversion, starting with a half roll clockwise only to go back counter clockwise. This inversion is probably my only main gripe about the layout. It’s a bit of a tease to get upside down and then go back the way you came, and it almost didn’t even feel like the train was ever completely inverted. The next section is a series of trick-track and ejector airtime hills that will remind many experienced coaster riders of El Toro. This section is really like riding on the back of a bull, and those in the back that can’t see exactly where the track is going will be even more surprised with the rapidity and forcefulness of these elements. 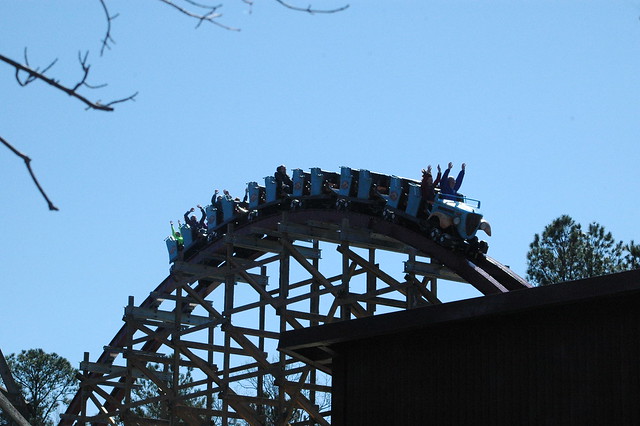 After coming around a bend with another trick-track element, the coaster hits riders with the coup de grace, a low to the ground, slow motion barrel roll. This inversion is very different from the diving barrel roll as it feels like someone literally hit the slo-mo button on the remote. The train just went through a series of rapid ejector air and trick-track elements, and this barrel roll is just slow and buttery smooth with a good half-second of hangtime (not as much as the hang on Goliath though). 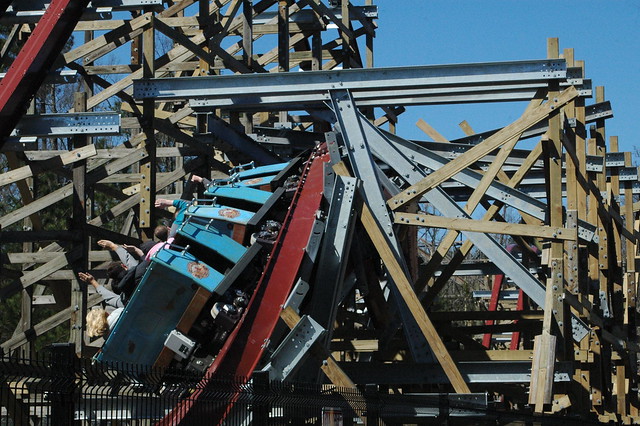 After the roll, it’s one more sweeping right turn and a couple of more quick airtime hills before the train is back at the station. On a cold day, as it was for the media preview, you could feel the train running on fumes as it crested the final hill into the station. 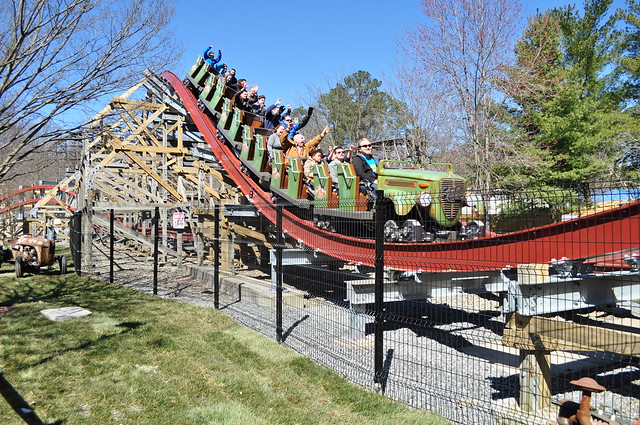 Twisted Timbers builds a bit of a backstory, told through a few theming elements and landscaping. There’s what appears to be some type of alien asteroid or other astral body that has landed near the base of the lift hill. There’s also twisted metal and wood throughout the grounds to set the scene along with some farm equipment strewn about that was obviously affected by the impact. It’s a good theming job for a coaster that probably could stand on its own. 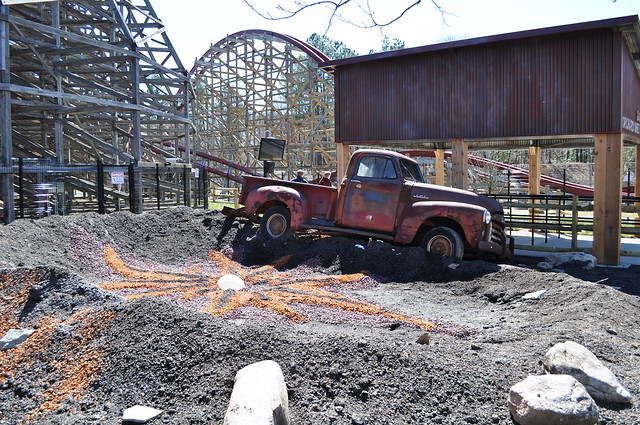 I have to say that I was a bit skeptical when Kings Dominion first announced Twisted Timbers and revealed the details of their newest coaster. It seemed rather small and slow for a world-class thrill machine. However, don’t let those stats fool you — this is no kiddy coaster. Very much like InvadR did last year at Busch Gardens Williamsburg, Kings Dominion has managed to pack a punch into a relatively small frame. While Twisted Timbers will probably quickly lose luster once Steel Vengeance opens in a couple of months, Kings Dominion shows that you don’t need to break any records to create a world-class roller coaster. 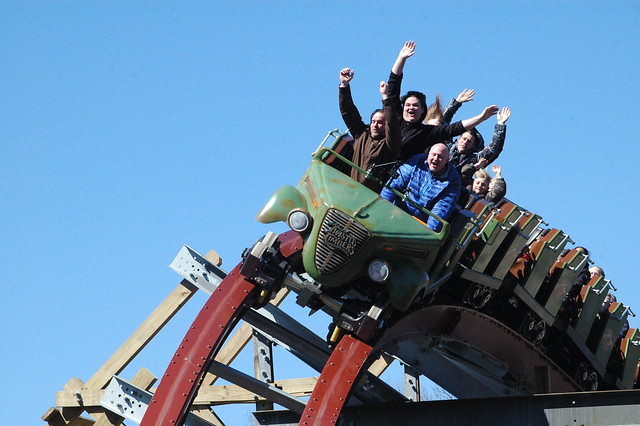 Amazing. Considering it's been many years for a new coaster, or a reconstructed one, I'm totally excited for Twisted Timbers. This will have to hold me over until I make my Cedar Point trip for Steel Vengeance in July.

Anything is better than the original in this case. The Hurler was awful and now it looks great. I’ll have to check it out next time I am visiting friends in Annandale.

Robert, no media preview? Thought Russell was a VA local? Shame... I like Russell’s reports!

Finally one of my local parks has a RMC. After riding Twisted Colossus at MM, I've been hooked and thirsty for more. This will have to do until Cedar Point visit for Steel Vengeance.

I am awaiting a report from Russell, which I will swap in here ASAP. But I wanted to get the POV up as soon as I could.

Excellent review, Russell! I can't wait to try this ride out for myself next weekend. While I'm a little worried I may be too spoiled by having Twisted Colossus locally, it looks like a very fun ride and the perfect addition to Kings Dominion's coaster lineup. It will be interesting to see where the ride ranks compared to the four RMCs I've ridden, but considering all are in my top 25 (out of over 400) I've got fairly high expectations.

Agreed, great job, Russell! Love the technical descriptions and the comparisons to other rides and elements to give a real sense of "place". You are a much better Coaster Boy than I am, for sure!

That first roll into the initial drop is spectacular. Looks soooo fun! And that slo-mo roll at the end reminds me of the double corkscrew on Outlaw Run at Silver Dollar City where you feel like you are just hanging there FOR-EV-ER as the train naturally slows and heads back into the station. Fantastic! I can't wait to visit my old stomping grounds and ride both this coaster and InvadR down the road. Terrific stuff!

Between Twisted Timbers, Time Traveler, Steel Vengeance, and all the other coaster goodness on the way, we don't have to worry about a stupid water slide being selected as coaster of the year in 2018!

Awesome! This coaster looks much better than I had anticipated.

Twisted Timbers is a Hybrid Steel Coaster on a Wooden Frame.
Oh boy this sure is one fast coaster. You go upside down 3 times.
But you don’t feel like you are upside down. Because you go so fast 54 MPH.
I just love the layout of the Coaster. The Train car is an old type of Car.
I rode it in the front seat. And I liked following the track. They do take your picture on Twisted Timbers. You can’t have any loose items while on the coaster. But there’s Lockers next to Twisted Timbers. And it’s only $2.00 for 2 hours. And you create your own Combination. You have to put your stuff in a locker or with a none rider. I really love the air time and there’s lots of air time on Twisted Timbers coaster. In fact you feel like you are coming out of your seat. Oh there’s lots & lots of twists and turns. And lots of humps. At the entrance of Twister Timbers there’s an old car. And you also see old tracker, truck, car & as you go up the stairs to the train you see a tracker up high.
Twisted Timbers Coaster is a must ride. I rate Twisted Timbers 10 out of 10.