March 27, 2018, 1:47 PM · Warner Bros. World has revealed its final set of attractions, as the indoor theme park prepares for its grand opening this summer in Abu Dhabi. Today's announcement includes the new rides and restaurants in its Flintstones-themed Bedrock and its Dynamite Gulch lands.

The attraction in Bedrock will be The Flintstones Bedrock River Adventure, a flume ride through the Stone Age city. 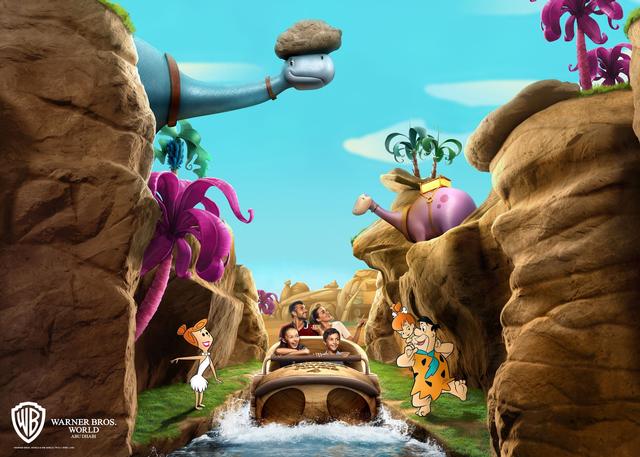 "Tucked away in the natural beauty of Bedrock's Stonetrail Park, passengers will embark on a scenic boat ride through stone-age wetlands, prehistoric neighborhoods and the city's picturesque downtown area," the park announced in its press release. "While aboard the eight-passenger boat, guests will enter through boulder-strewn pathways, framed in oversized native palm trees and foliage, and pass by the occasional fountain or statue honoring one of the town's leaders."

Bedrock's main restaurant will be the iconic Bronto Burgers and Ribs, featured in the opening closing sequence from the 1960s television cartoon. The land also will include a quick-serve Mammoth Munchies, serving a variety of snacks.

In Dynamite Gulch, visitors will find attractions themed to The Jetsons, Road Runner, and Looney Tunes. On the Fast and Furry-ous inverted roller coaster, passengers will climb onto Wile E. Coyote's ACME Road Rocket 9000 for yet another (probably futile) chase to catch the Road Runner. 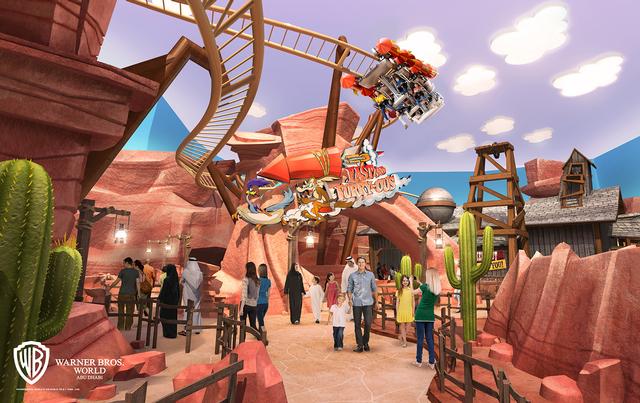 Other rides will include The Jetsons Cosmic Orbiter (a spinner) and Marvin The Martian Crater Crashers (bumper cars).

Dynamite Gulch appears to be well themed to a Road Runner attraction. How you cram The Jestsons into that is beyond me. This whole concept and choice of IP is a head scratcher.

One Day, Sonic the Hedgehog could have his own launch and looping roller coaster for Six Flags parks and the Warner Bros. theme parks (Warner Bros. Movie World and Warner Bros. World)

^ Barry makes a great point. The Jetsons and the Roadrunner together is like putting Big Thunder Mountain in tomorrow land. Very odd.

This is all enclosed right? I wonder if these old American cartoons are well-known and popular with most guests?

MarkSharp: "I wonder if these old American cartoons are well-known and popular with most guests?"

I reply with my original comment: "This whole concept and choice of IP is a head scratcher."

The geek in me has to point out the following sentence is incorrect. "Bedrock's main restaurant will be the iconic Bronto Burgers and Ribs, featured in the opening sequence from the 1960s television cartoon." The Iconic rib scene is actually from the closing sequence.

I don't think this park is going to make it. Not trying to be negative. . . but. . . I don't see a lot of international travel drawn to this venue. If I were Universal, I'd consider a smaller indoor park near the Convention Center to counteract the massive heat in Orlando. . . Also, Universal, keep an eye on this property--if it goes under--buy these rides and re-theme them to DreamWorks IPs.

Well they still sell Flintstone's chewable vitamins and make "pebbles" cereal here in states. But it only seems relevant to an "older" demographic. Sure kids have cable channels and internet to watch these classic characters, but I don't see today's youth spending much time doing that with all the current trends out there. There is so much more contemporary IP to choose from the Warner library.

Those look like very fun rides. Hopefully as they keep adding, they will get more showing up.

These look well themed, but it's true that the IPs are as old as the hills.

The Grand Canyon AZ campground themed to the Flinstones has been for sale and floundering for years. No idea why they picked this IP except that maybe in reruns these shows were cheap and got played in the middle east. They don't have offensive content or western ideals that might be a no go in Muslim society as well.

@MarkSharp - People in Dubai don't like the Flintstones, but the people in Abu Dhabi do.

Tournament 2018: What is the best theme park in Europe?