What is the 'right' look for a super hero?

April 6, 2018, 9:47 AM · Warner Bros. World Abu Dhabi is promoting its summer debut with a big presence at the Middle East Film & Comic Con this week. During the con, the park has been posting to its Facebook account pictures of its characters' appearances. But one of its super heroes is not sporting the look that many fans around the world have come to expect. 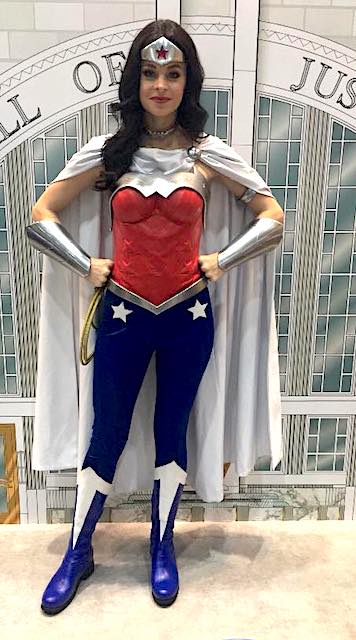 Instead of her traditionally skimpy costume, this Wonder Woman is wearing long pants that cover all of her legs. She also is wearing a cape that covers her shoulders as well as any cleavage on her upper chest. It's a far more modest look, one that undoubtedly reflects the much more restrictive social norm for female appearance in Muslim countries.

But before we in the West jump on our high horse and start talking smack about Islam's fashion rules, allow me to point out that Wonder Woman's Abu Dhabi costume actually brings her look much more in line with her Justice League comrades Superman and Batman. 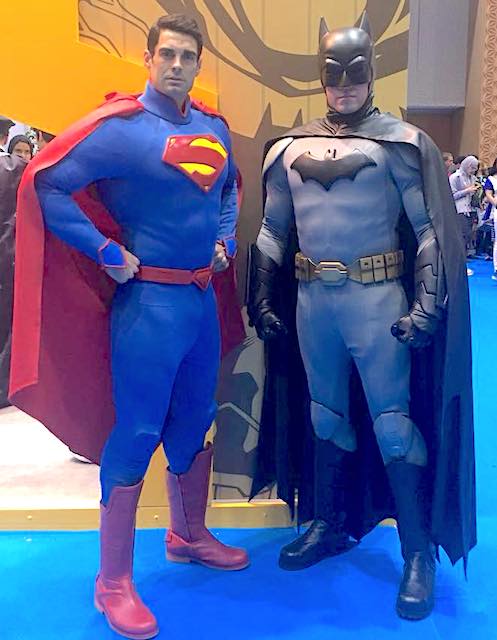 Superman and Batman aren't showing very much skin. So why does Wonder Woman? The answer, of course, lies in comic books' appeal to their initial core audience, which was pubescent boys. While both male and female super heroes have been drawn in idealized physical forms, the women typically show a lot more skin, adding some sex appeal for straight boys in the pre-Internet era, when a comic book might be the best chance you had at seeing a hot woman in her underwear.

(Eventually, the industry figured out that girls read comics and even that some boys were interested in seeing the guys show some skin, too, so it started developing scantily-clad male heroes. But that's another post.)

Back to Wonder Woman, her initial characterization offered an amazing blend of emotional hits for young readers: some emerging male sexual fantasy, presented within a context of female empowerment, that eventually managed to evoke a host of Mommy issues, too. It's brilliant, really. (Seriously, go read that link. The history of Wonder Woman is fascinating.)

Theme park designers have to consider a wide range of issues when developing new attractions, among them, local cultural standards. That's why Tokyo Disneyland's Splash Mountain eschewed the traditional single-file, wrap-your-legs-around-the-person-in-front-of-you, seating arrangement for a flume ride in favor of more demure side-by-side bench seating that fit better with the more formal nature of social interaction in Japan. (FWIW, Disney World copied that layout when it turned out that it offered a much higher hourly capacity than the Disneyland original.) And cultural considerations are why Wonder Woman can't show a lot of skin in the United Arab Emirates.

Is that wrong? Well, it's wrong if your park fails because it offended the local market. Every business that has had success in global markets has learned that it needs to be flexible enough to tweak its products around the world. Compare a McDonald's in Singapore with one in Cincinnati, if you ever get the chance. They're not the same. Theme parks have to adapt, too.

But if you insist on passing judgment on another culture because it is different than yours, consider this: To many people around the world, a culture that makes its female super heroes strip down to their bra and panties while allowing its male heroes to remain covered up is the one in the wrong.

One of the rationales for covering women in Muslim cultures is to protect them from unwanted male leering. Is that a bad idea? Personally, I'm with Kareem Abdul-Jabbar (a Muslim!) here, and agree with the amazing piece he wrote in today's Guardian, taking the NFL to task for its hypocritical treatment of its cheerleaders. Women should be able to wear whatever the heck they want, and men need to get over that.

Yet Kareem, and I, and many of you, live in the West. In my limited experience visiting the United Arab Emirates, it appears that female visitors from the West are pretty much encouraged to wear whatever the want. But if theme parks in the country feel that they must cover up their female characters in order to appeal to the many Muslim visitors to their parks, that's their call.

If seeing a more scantily-clad Wonder Woman is really that important to you, there are plenty of Six Flags parks to visit here in the United States.

...you seemed to gloss over the fact that these costumes are just horrible. They look like cheap plastic action figures. I didn't notice that she was covered up, until it was pointed out. I was more focused on how wrong the colors and material appear to be.

I think the bigger story here is that they are even allowing Wonder Woman in the first place. Many middle eastern countries have banned the movie because Gal Gadot (aka current Wonder Woman) is Israeli. Another debate for another post whether that’s right.....

I don't have a problem with Wonder Woman being depicted this way. It should be noted, however, that women in the West have the freedom to dress as Wonder Woman any way they want with very little to no push back both culturally and legally, while women in the UAE, and other countries in that region, do not. People from cultures where those types of freedoms exist should be promoting those freedoms for females in those countries where they do not exist. This sentence, "Women should be able to wear whatever the heck they want, and men need to get over that", being directed at the West and not other regions of the world is a problem...

When many of these characters transition from comics to movies etc. we're cleaning up their costumes in the west as well. Take Marvel's Cloak and Dagger, which is being adapted to TV for FreeForm. The original look had lots of cleavage window. I'm strongly doubting that we're getting any of that on teen targeted television. Also, Wonder Woman's costume is heavily modified for DC Superhero girls products and cartoons. I think this is a case of extreme comic fanboys foaming at the mouth about nothing. I certainly don't want my six year old daughter getting the idea that Wonder Woman only has value because of her sex appeal.

I think that WBWAD did a good job on its Wonder Woman costume, save for adding a cape. Ever since Edna Mode's rant in The Incredibles, I've been in the "no-capes" camp, too. (Sorry, Superman and Batman!)

There are modern comic takes on WW both in the comic books and the animated shows that have a WW as covered as the men...

Women show a lot more skin (and shape) in society in general, not just in the comics.

While not her traditional look. Wonder Woman did sport a similar costume with long pants in the New 52 relaunch a few years back.

"What do the the Amazons think of their skimpier 'Justice League' outfits?
Nov 14, 2017 - On Tuesday, another Amazon actress came out in defense of the new ensembles. Samantha Jo, a martial artist who stars as the Amazon Euboea in Wonder Woman and Justice League, shared a lengthy response to the costume controversy on Twitte. She praised director Snyder and costume designer ..."

All though I am not pleased with the UAE in general with regards to their attitudes and wouldn't want to visit, I do think this is a fair compromise. I think they actually did a great job making the costume more "appropriate" for the location. As mentioned already if anyone has problems with this they should revisit their own attitudes considering the way male superhero are dressed.

I wouldn't personally mind if the male superheroes showed more skin on their costumes but that wouldn't make sense now would it. Obviously the only reason Wonder Woman's costume was so revealing was because of the straight male audience. This costume makes more sense as a proper super hero costume since its actually practical. Minus the cape I agree with Robert (NO CAPES!).

I really do wonder though if they had some designs with a hijab wearing Wonder Woman! That would have been a whole other story but still culturally appropriate for the region.

Frankly, I think they all look bad, especially the Wonder Woman costume. it looks like whoever designed it didn't know what he was doing.

FWIW, I am fairly sure that the weird high collar on the Superman suit is to conceal the padding that the suit uses to create the illusion of all those ripped muscles. The padding would be too obvious with the traditional low collar of the Superman suit.

I won't complain about the costume in the Arab Emirates but I will complain about the other costumes. I have seen better massed produced Halloween costumes than those pictured for Batman and Superman. To be honest the Wonder Woman costume still shows more skin than I would expect in a Muslim country. Her costume is still nice compared to her male counterparts. Just saying

I don't like any of the costumes, but in their defence, I think they may have gone for a 'painted' look.

if you look at all three of them, you will notice that they all look a little like stop motion miniatures (Ardaman meets DC). and maybe thats what they are going for?

but I like the general idea of the wonder woman character being more covered (put the costume in better hands) and you could have a fierce, striking looking WW. I will go so far as to say.... put that look into the films...

I wouldn't mind Six Flags Great America adopting the Wonder Woman costume at the very least for our chillier Octobers.

These three costumes are very similar to what Warner Bros. Animation has been using in their Justice League animated direct-to-video features for the past few years (I can't speak to the comics), e.g., "Throne of Atlantis" (2015). In that design, Wonder Woman has simple silver trim on her leotard (not an ornate gold eagle), a blue yoke, blue half-sleeves, blue boots, and one white star on each hip -- this costume adds the cape, deletes the yoke and half-sleeves, and adds the pants (which appear in some other versions of her design). So the combination isn't totally unprecedented -- but it's the *workmanship* that doesn't seem up to par. What is with the wrinkles in her torso? For all three of them, in fact. It's not like molded faux-muscle detail is a secret costuming technique.

Ten steps to boost attendance at a struggling theme park