Is VR an alternative for disabled access on a theme park ride?

Why create a VR version of a ride that people can experience IRL? Because some Efteling visitors have not been able to experience the Dreamflight. As the late Theme Park Insider correspondent Daniel Etcheberry noted in 2012, Droomvlucht was not accessible to visitors with physical disasbilities. The ride, which opened in 1993, could not accommodate wheelchairs — not even in its load/unload areas for transfers.

While now rare, this lack of accommodation is not unprecedented, especially for rides developed before the United States enacted the Americans with Disabilities Act in 1990 and the industry began developing more accessible designs worldwide in response. Disneyland's submarine ride might provide the most relevant comparison with Efteling's Droomvlucht, as it also is completely inaccessible to anyone who cannot climb a narrow staircase... and it provides a media-based alternative to riders with disabilities in response. 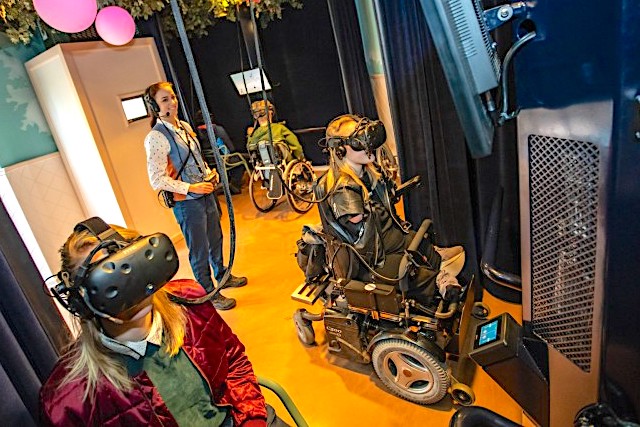 VR offers the promise of a more immersive alternative, with ability to allow visitors to select their focal point within a complete field of vision. Efteling also includes 4D-style wind and smell effects to enhance the experience. But even a VR alternative still isolates the visitor with a physical disability, as they cannot experience the attraction with their friends who can ride the regular attraction.

And that's where Efteling's VR alternative does something revolutionary. Efteling has incorporated microphones and headphones with its VR experience, so that the visitor seeing the ride through VR can communicate with their friends on the "regular" ride. 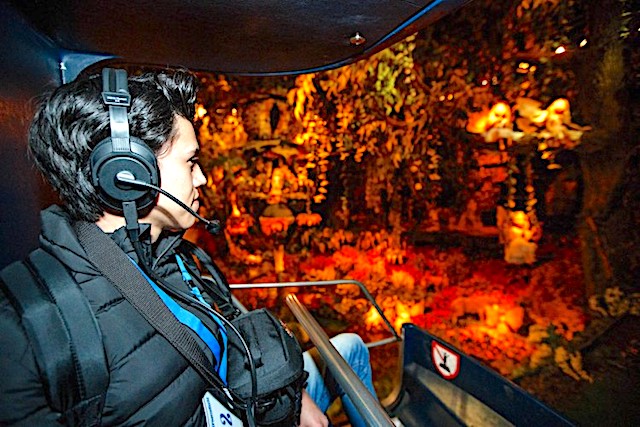 "Until now, VR has often been used for individual experiences. With the use of other techniques such as audio equipment, we have created a group experience that completely stands in line with Efteling and the theme park’s values," Fons Jurgens, Efteling's President and CEO, said in a statement.

Very clever, and the integration of headsets to interact with able-bodied riders is brilliant. However, I wonder if ADA would allow a park to go back to constructing inaccessible attractions and use a VR alternative like this to comply with ADA. While I'm sure it's annoying and in many cases an engineering challenge (particularly with load and unload platforms), zero-entry ride vehicles and separate load tracks/platforms are infinitely safer and more discrete for disabled guests. New vehicles and platforms designed to comply with ADA also tend to be more comfortable than older vehicles with lips/high sides, and tight platforms where disabled guests are crowded in the exit corridor.

The only problem is that this won't make a park any money, so only those with lots of extra cash lying around and a savvy PR staff to turn this into a differentiator against the competition will bother with something like this.

I think the inaccessibility of Droomvlucht had become a bit of an embarrassment for Efteling, which really does now see itself as an industry leader. So I'm not surprised that they dropped the coin to do this. But the real solution, as Russell suggested, is to create fully accessible attractions in the first place.

Disney did something similar when the reopened the inside of Disneyland's Sleeping Beauty Castle. That was an exception because the castle was not built to have any attraction inside, and Disney isn't going to do anything to the castle's exterior. Its better to offer the actual experience whenever possible, so I don't see this becoming the norm.

What I expect is existing attractions being modified wherever possible to make them accessible. Exceptions will be attractions like the tree house, because stairs are an essential part of the design. I am surprised there is not a wheelchair accessible submarine. No attraction that requires zero walking, steps, or other physical obstacles whatsoever should be inaccessible just because of a poorly designed loading area. They should have just redesigned the ride instead of the creating a new way to experience the ride.

The Netherlands hasn't got anything like ADA. No one has to build handicap accessible toilets or theme park rides.
Although the fact this is not regulated is unfortunate often the reality is that we have a ton of old buildings where toilets only can be created in impossible locations with no way to reach for someone in a wheelchair.
New development could be hold to a rule and I would applaud it.

Regarding Efteling there is a conscious lack of ignoring wheelchair guests. In 1995 I asked if they would include wheelchairs for Huis van de Vijf Zintuigen. It's a simple ride, able to hold a wheelchair of to have a transfer. I never got an answer but it was no. Most Efteling rides could have a transfer with just a bit of effort.
I also asked if smoking in queue's could be band...you can still smoke there.

Don't get me wrong, I love the park, but I don't love visiting it.

While Sleeping Beauty Castle at Disneyland is nowhere near as old as some buildings in the Netherlands or elsewhere in Europe, its the same problem. There is a balance between preserving historic places, and making them accessible. A building from the 16th century is never going to be fully accessible, but a new building should be. Accessible buildings in the U.S. were starting to become the norm even before the law was passed. Some Politicians in the U.S. keep going on about how Europe and other parts of the world are ahead of the U.S. I guess Efteling didn’t get that memo. It shouldn’t take a law for them to spend a few dollars more and make their newer rides more accommodating. This is just a joke. Making the actual ride accessible would be far less expensive in the long run.

The Efteling has made great strides in accommodating people in wheelchairs. I’m not sure what O T’s 1995 incident is referring to (Huis van de Vijf Zintuigen is the park entrance), but you can borrow wheelchairs from to park.

Within the park there are 4 attractions that are not accessible. Droomvlucht, Polka Marina (a 34 year old spinner), Avonturen Doolhof (a children’s maze) and Monorail (a small monorail track with 2 person carriages).

Droomvlucht was the only big ride inaccessible to wheelchair users. That sucks. The problem isn’t with the station (people can easily be transferred there) but with offloading passengers when an incident occurs. When something happens and the power is still on, all vehicles ride to a safe spot to offload (remember this is a suspended dark ride) but when there is no power, the vehicles must be unloaded from the position they were in when disaster struck. And that’s the problem. I’m not sure how Peter Pan’s Flight copes with that?

Thankfully all new developments within the park are accessible, like Symbolica, Baron 1898, Vliegende Hollander and Joris en de Draak. The re-opened Python also is better accessible with a more spacious waiting area for wheelchair users and a less steep ramp to the station. Last but not least: they’ve launched a park map specifically for wheelchair users that indicates where facilities are, which attractions are accessible and how and what might be challenging trials within the park.

Back up generators that have enough power to move the ride vehicles back to the station would be the solution. It sounds like great strides have been made, but more is still needed to be done. A VR version of the ride is a step in the right direction, but not ideal.