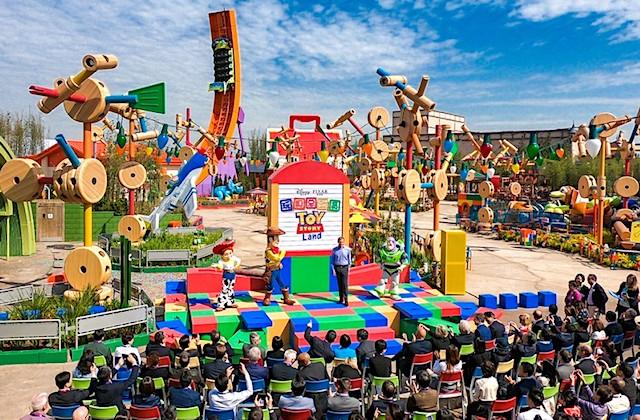 "We are grateful to the people of China for wholeheartedly embracing Shanghai Disney Resort, for truly making it their own and also making it one of the most successful theme parks we’ve ever opened," Iger said. "We are incredibly proud of the success of this one-of-a-kind, world-class destination, and we are thrilled to give our Chinese guests even more to explore and enjoy at the resort with the addition of a spectacular new land based on Pixar's beloved Toy Story characters."

Toy Story Land is the seventh land at Shanghai Disneyland and the first new land to open following the park's debut in 2016. Theme park fans in the United States will get their first Toy Story Land when Disney's fourth Toy Story Land opens at Disney's Hollywood Studios in the Walt Disney World Resort on June 30. That land will get a Mack Rides launched Slink Dog Dash coaster and a Mater-style Alien Swirling Saucers ride in addition to a new entrance for Toy Story Mania.

Have been to the Paris version numerous times which includes a toy soldier parachute drop but without doubt the American version will have the best ride line up when it opens in June.

Meh...fair ground calibre rides im afraid, nothing there to warrant a trip out there, although their 'pirates' is sure tempting. If you want to see this, just head to the studio's park in Paris.

Can't wait to visit in September!

Can't wait to visit in September!

Really shouldn't have called it a land, it's just a small subsection of the park with a couple flat rides. Hopefully an E-ticket will be in the long-term plans though, or at least a Slinky Dog coaster mirror.