Universal expands plans for its new theme park in China

Universal first announced in 2014 plans to build a theme park in the Chinese capital, officially signing off on the project in 2015. Concept art for the park included the Incredible Hulk Coaster, The Wizarding World of Harry Potter (Diagon Alley and Hogsmeade), Revenge of the Mummy, Jurassic Park, and Universal Studios Singapore's Shrek and Madagascar lands. But no attractions had been confirmed for the park until Universal Creative executives announced last week at the Fast & Furious Supercharged premiere in Universal Orlando that that attraction would open in Beijing, as well. 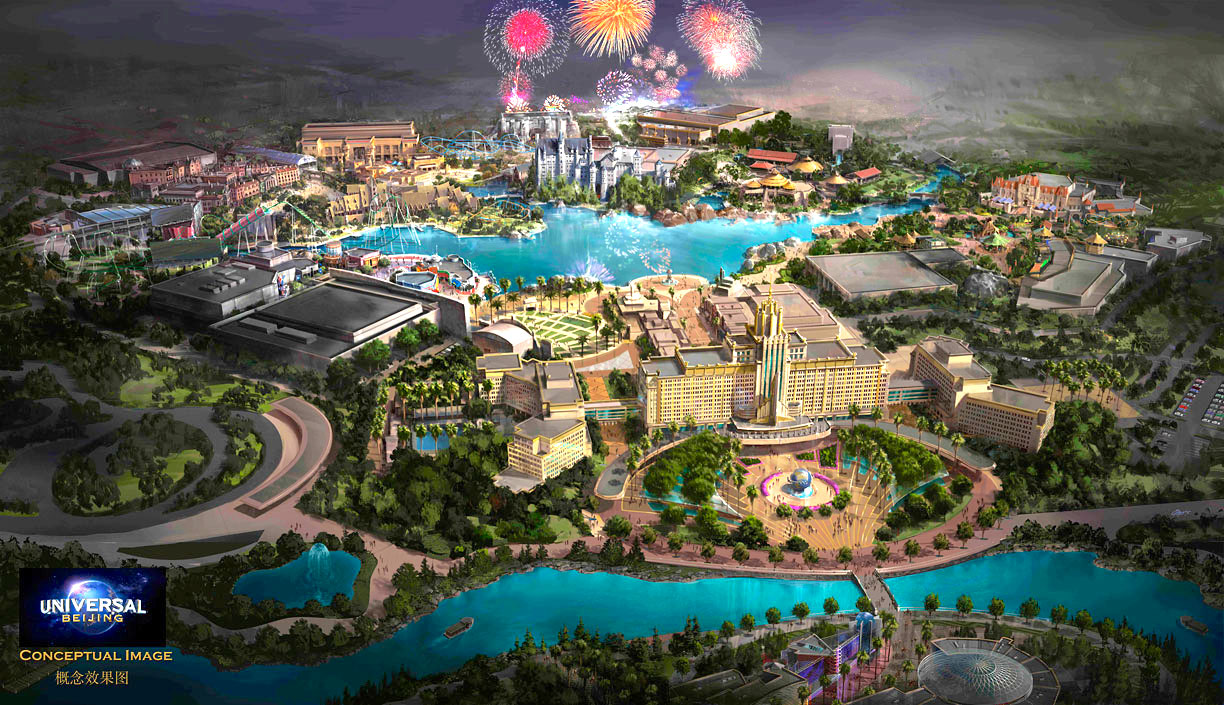 With the budget for the project growing from an estimated US$3.3 billion to US$6.5 billion, Universal is said to be adding lands and improving attraction plans for the park, as well as expanding retail and entertainment space. In addition to the theme park, the Universal Studios Beijing project includes a CityWalk shopping and entertainment district as well as the world's first in-park, Universal Studios-branded hotel.

So what will the new park really include when it opens? It's doubtful that the original concept art faithfully represented the actual plans for the theme park. And the announcement of Fast & Furious and the reported budget increase confirm that the plans have shifted from whatever they might have been in 2014. Post your guesses and wishes in the comments.

Wow, between that and their crazy bid for 20th Century Fox, they sure are hell bent on bankrupting themselves.

Still a fan I'm wondiering where they're gunna get the money to do all of that...

There be many Galleons in Gringotts Bank, and a lot of cash in Domenic Toretto's cars, too. And cloning dinosaurs is just like printing money.

However if Universal is looking to beat Disney in attendance by building a more expensive park that's just not going to happen.

First because Beijing is just not nearly as good of a destination as Shanghai for a theme park. Beijing is the Chinese cultural city, people go there to see the Tianenman Square, the Forbidden City, the Great Wall. Having a massive Universal theme park there is just awkward, IMO they would have been better off building in Shanghai where families will already be going for that kind of thing. Disney built itself as a major tourist destination in a city that had a huge economy and a lot of people, but really lacked that slam dunk modern/sleek family tourist attraction. Beijing already has them. Shanghai Disneyland is a national attraction with over half its attendance coming from outside of the Shanghai area, I think it will be harder for Universal to get that...it reminds me in a way of Disney building a park in Paris, they see the large volume of people going there but not really peeling the onion on why people are going there.

My second concern is the weather. Attendance is going to suck in the winter and there's nothing they can do about that. Are they going to close off areas of the park and attractions to save operating costs at that time? They may have to.

My third concern, and this is just from having been to both Beijing and Shanghai, is that Shanghai is an amazing city and Beijing is a hell hole with incredibly bad smog, traffic, and just overall unpleasant in every way. This may change with time.

**However, this does not mean I think Universal Beijing will be a flop, i'm sure if they build a great property people will go to it and it will be crowded and profitable. I am just saying there is no way it will have the kind of attendance that Shanghai Disneyland has if that's what they're trying to do.**

Hopefully this doesn't mean budgets are going to relocated from the US to facilitate costs overseas.

Yes, but building it in Shanghai means that they would be competing directly with Disney for both the local dollars and the tourist dollars. At least with building in Beijing they'll have a built in market of 20+ million all to themselves. Would you rather have 20 million to yourself or have to share 20 million with a rival?

It was the same logic they used with Universal Japan, instead of building in Tokyo and competing with Disney directly there, they built it in Osaka, so they only have to compete for the tourist dollars in Japan. And Universal Orlando has a higher attendance than either of the two Disney gates (though combined Disney is still higher) so it seems to have been a successful strategy. I think the same logic was behind building a park in Singapore as opposed to directly competing with Disney by building a park in Hong Kong, Macau, Shenzhen or Guangzhou. Building the park in Beijing instead of Shanghai is a sound decision, I think, though I do admit your concerns about the cold winter climate there are valid, as Beijing regularly gets below freezing for about three moths of the year, whereas Shanghai only gets that cold for about one month of the year. The bonus is, most of Universal's rides nowadays are completely indoor screen-based rides, so generally they wouldn't have to shut down as much of the park in cold weather than a Disney park would.

The logic behind building the park in Singapore was that it was free money for Universal (due to sweetheart deal from developers) especially at a time they desperately needed it. But that's the same reason Tokyo Disneyland was built...and the reason all of these parks in the UAE are being built.