May 27, 2018, 7:33 PM · Theme park fans learned last year that Disney's new Star Wars land would be set on the new planet of Batuu in the Star Wars universe. And at the Star Wars Galactic Nights event at Disney's Hollywood Studios in Florida tonight, fans learned more about the Batuu village that will provide the setting of the new land.

Widely known for the petrified remains of its once towering ancient trees, the spires now stand guard across the river valleys and plains and have long captured the imagination of travelers to this planet. To the first settlers, these petrified spires became more than just landmarks; they became the heart of the outpost itself. 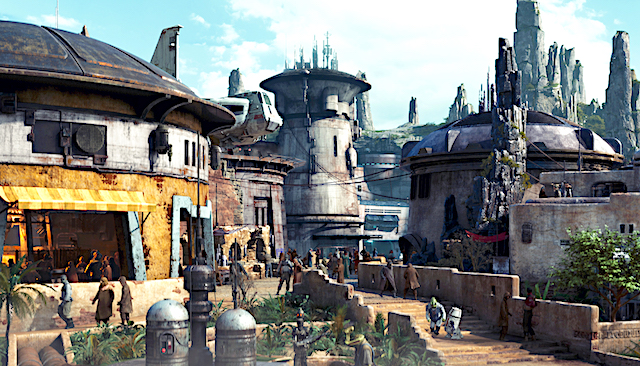 The new land will include two attractions, one in which visitors will fly in the cockpit of the Millennium Falcon and another featuring battle with between the Resistance and the First Order. Disney is building full-scale AT-ATs and other vessels that will be featured around Black Spire Outpost and in the land's attractions. At 14 acres in each park, Star Wars: Galaxy's Edge will be Disney's largest, most ambitious and most expensive theme park lands to date.

Star Wars: Galaxy's Edge opens next summer at Disneyland in Anaheim, California and in late fall of 2019 at Disney's Hollywood Studios at the Walt Disney World Resort.

Hmmm. A place where scum and villany reigns. A place that is filled with (by disney's prior press releases) all types of shadowy creatures from across the galaxy.

Attaching the description black to this. It sounds like disney is practicing racism. First they dress darth vader all in black, and now this. Not to mention jar jar. racist racist racist.

Your joking right? Give me a break.

Eh. Barry White is black. Jack Black is white. And your point is?

@davedisney They also said "It’s also a convenient safe haven for those intent on avoiding the expanding reach of the First Order". And sins when is black clothing racist? And it wasn't Disney but Lucasfilm before Disney bought them due to a lack of creativity.

If you want to complain about this thing you could mention that it doesn't evoke Star Wars in any way or form (as most of the later films don't for me). That the "safe haven" isn't that safe because the First Order is there in abundance making the backstory as solid as a paper bridge. Or that timelines are all over the place regarding characters and ships used in this patchwork land. But I have a hard time seeing anything racist in there.

@OT Thanks tired of hearing everything is racist, waiting for someone to tell me that walls are painted white due to racism and be serious.

I also don't like how thin the backstory is on this land, as immersive and expensive as they are building this up to us the backstory should be solid. a mix of all that sells doesn't do that at all for me.

@Robert I recognize Cars Land from the movies. Galaxy's edge doesn't do that for me.

OT and herwig. I was completely being sarcastic there. You are right. The sad thing is on other topics, there are snowflakes who will bring race into it on equally absurd basis.

except, they are being serious. And on universities and on facebook and twitter, there are a lot of them.

These updates about Star Wars Land seem to confirm I'm going to spend time looking for what is familiar within everything that is new. I was kinda hoping I'd be bombarded with what I was familiar with, and discover things that are new.

Black Spire got a name drop in Solo, nice to see the continuity between attractions and movies.

@davedisney of course, it's you who first brings up race.

@ Daniel.....Not sure if they'd actually go that far, lol (Even Chewie had second thoughts), but I'm sure someone must have brought up the possibility!

I'm sure that "milk" from Last Jedi, might be a beverage option...

What do Star Wars land and the Incredicoaster have in common?