June 10, 2018, 7:43 PM · One of the world's more popular theme park resorts is about be all over the news. Theme park fans might know Singapore's Sentosa Island as the home of Universal Studios Singapore, which claimed the final spot among the Top 25 most-attended theme parks in the world in last month's annual TEA/AECOM Theme Index report. But the world's eyes will be on Sentosa Island this week not because of a theme park but because its Capella Hotel is hosting the summit between U.S. President Trump and North Korea's leader Kim Jong Un.

The hotel stands just a couple of football fields' distance behind the Jurassic Park Rapid Adventure ride in Universal Studios Singapore. One of 14 hotels on the island, Capella is not part of the Resorts World Sentosa development that includes Universal Studios and takes up much of the northern part of the island. The Norman Foster-designed Capella opened in 2009 and includes 112 luxury suites, manors, and guest rooms across 30 acres between the islands's two golf courses. 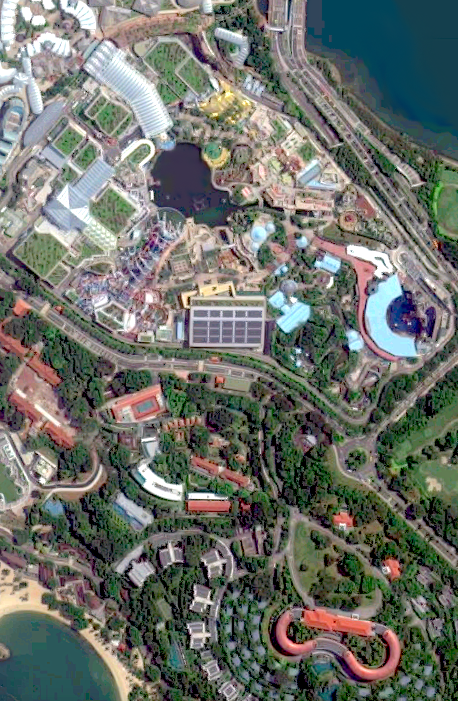 Aerial view of Sentosa, with Universal Studios Singapore at the top and the Capella at the bottom right. Image via Google Maps

I have visited Sentosa twice as editor of Theme Park Insider — once for a tour of Universal Studios Singapore just before it opened to the public and again a year later for the official debut of the first installation of Transformers: The Ride.

Imagine the high end of Las Vegas, combined with a compact version of a Universal Studios theme park, connected by a luxury version of CityWalk, and set on a tropical island, surrounded by white-sand beaches and five-star resorts, and you would have a pretty accurate view of Sentosa. It's a amazing place to visit. Connected to the Singapore mainland by a causeway and gondola, it feels secluded, but it's just a short drive from Singapore's Changi Airport — rated by many as the world's best. Run by a government known for efficiency and neutrality (and with absolutely no patience for public dissent), all these qualities make it an alluring location for a diplomatic summit involving Pacific Rim nations.

Universal Studios Singapore offers what I consider by far the best version of its Revenge of the Mummy ride, along with outstanding lands based on Shrek and Madagascar, which could provide solid templates for Dreamworks Animation-themed lands at Universal's widely-expected future new gate in Orlando. At 49 acres, it is Universal's smallest theme park, but it is loaded with attractions and as well decorated as anything Universal has created. 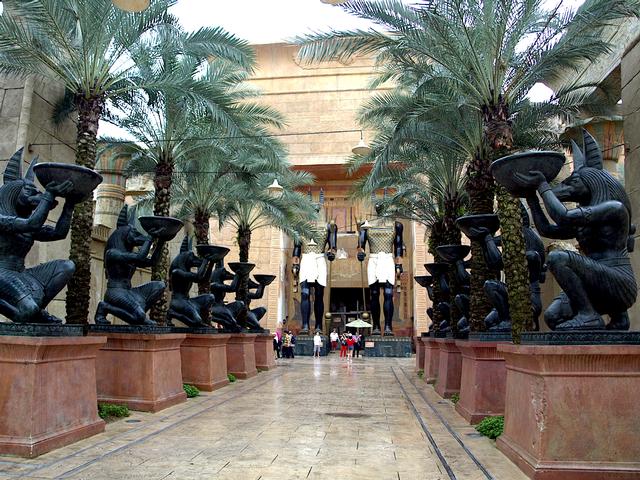 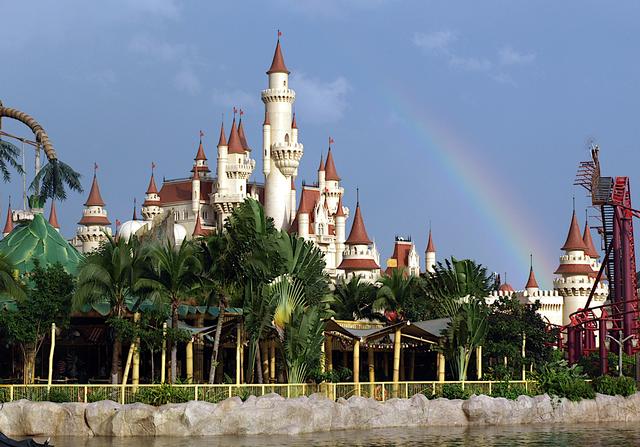 Beyond Universal, Resorts World Sentosa offers is CityWalk-plus FestiveWalk shopping and dining area, six hotels, a massive aquarium exhibit, and one of the world's most popular casinos. The rest of the island offers eight more luxury hotels, including the Capella, multimedia theaters, observation towers, and an adventure park with a zip line, rope course, and rock wall, as well as those beaches and golf courses. 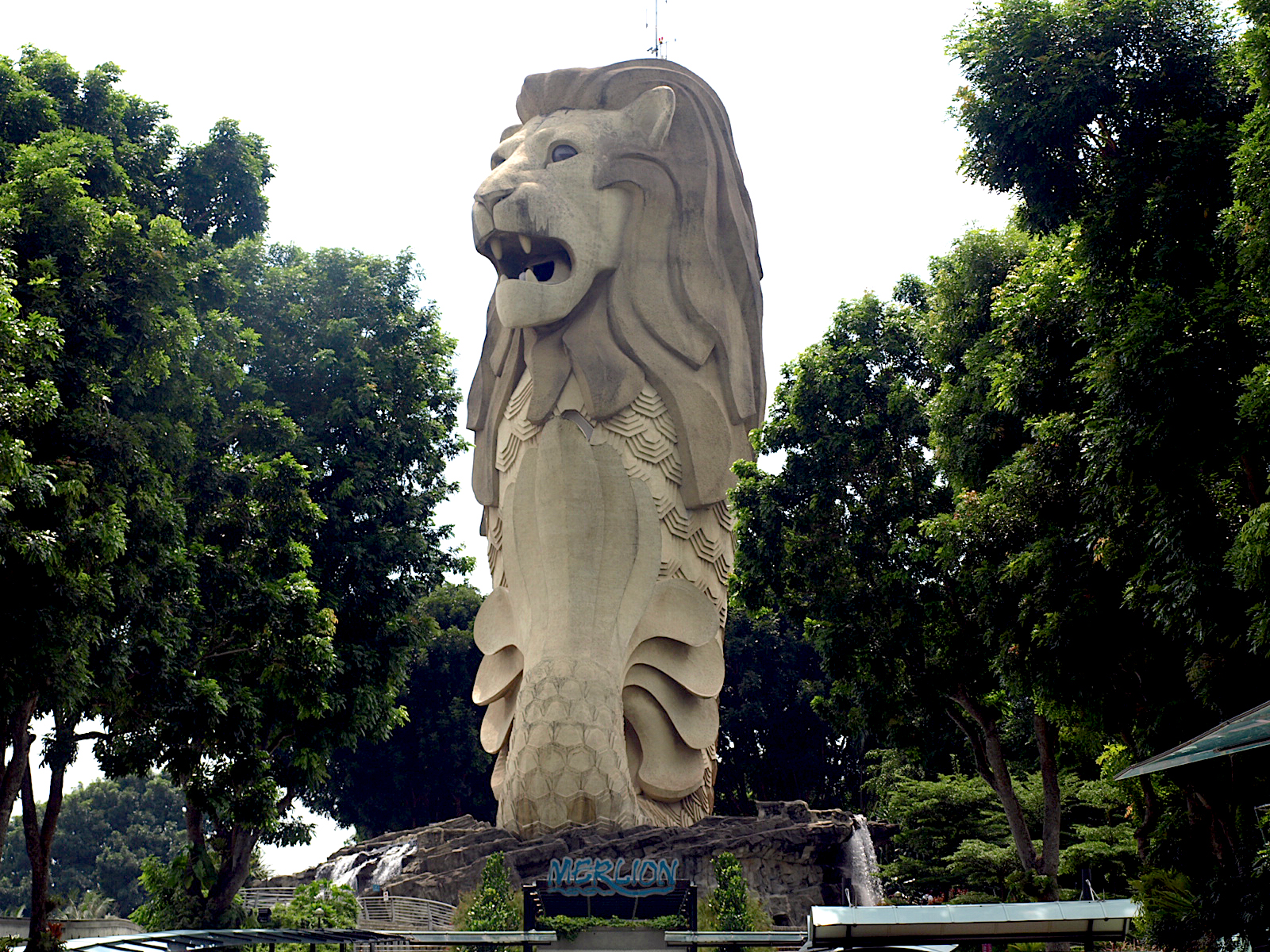 The Merlion on Sentosa Island, a symbol of Singapore

This is hardly the first time that big non-theme park news has happened at or near a theme park resort. On November 17, 1973, President Nixon delivered his infamous "I am not a crook" speech to a meeting of the Associated Press Media Editors at Walt Disney World's Contemporary Resort. A little over a year later, on December 29, 1974, John Lennon signed the contract that officially broke up The Beatles, again at the Walt Disney World Resort. And for less news-worthy international incidents, there was that time that the future President of France got lost in Pirates of the Caribbean.

No matter how this summit goes, Sentosa remains an excellent destination for theme park fans from around the world.

and then something goes horribly wrong...

It's a beautiful small park - a little too much in the way of 'Shrek' attractions i must say.

But it's appalling lack of new attraction, inability to expand has hampered it's growth. You simply can't just keep the same attractions going for near a decade and expect growth. It's somehow must find a way to expand, or cull attractions and replace with new.

Any ideas as to why GoogleMaps only offers 2-D and fairly low quality images of the area around the park? Is this something that has just happened recently with the upcoming summit, or has it always been like this?

They might remove a few attractions to put in Harry Potter. Trump prefers Mar-a-Lago.

Capela isn't part of Resorts World Sentosa as you say in the article, so eyes of the world aren't at all on Universal Studios Singapore. Kim does have a theme park connection to his dictatorship elsewhere- his murdered, elder brother was disgraced for trying to use fake passports to visit Tokyo Disney when both were teens and that's how they keft their Swiss boarding school.

I knew there was another angle I was missing! Thanks for the reminder. News gets bizarre when it gets close to theme parks, I swear.

Themeparkinsider.com is a place I consider a site not dealing with politics. The president is already all over the news so why talk about him on this site? I love coming on this site to learn about upcoming attractions, ticket deals and anything related to theme parks and resorts, not the president of the United States. That's just my opinion.

Sheesh. Maybe because there are a bunch of people hearing about Sentosa Island because of this summit, some of whom might be interested to learn that there's a major theme park on that island that we at this website just happen to know quite a bit about and are eager to talk about?

But this news is not directly linked to the park though. at all. Now if his meeting what held in the actual park then ok but its not. This is not like Disney's Hall of Presidents which was directly about him. That's what I'm saying. Like I said before, it's just my opinion.

Why is Disneyland now offering new deals for its annual passholders?