June 22, 2018, 12:45 AM · The Incredicoaster might be the most visible new attraction on Disney's Pixar Pier, but time might prove the most popular new attractions in the land to be its food.

Let's take a quick overview of the new offerings in Pixar Pier, with one of the Disneyland Resort's chefs:

Now that we have had our preview, let's eat our way around the land, shall we? Here we've ranked the five new food stands on the pier, from our favorite to least favorite. 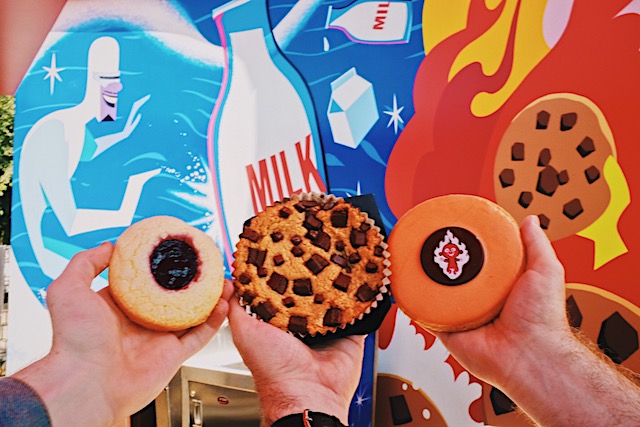 To us, this was the breakout hit of the day. The Jack-Jack Cookie Num Num ($6) isn't just a chocolate chip cookie. It's a warm, deep-dish chocolate-chunk cookie that easily could serve two, if not more. And the "gluten friendly" Incredicookie (also $6) won us over, too, with its blackberry filling and surprisingly fluffy texture. The iced Jack-Jack Shortbread Cookie (ditto) was okay, but suffered in comparison with these other delightful desserts. 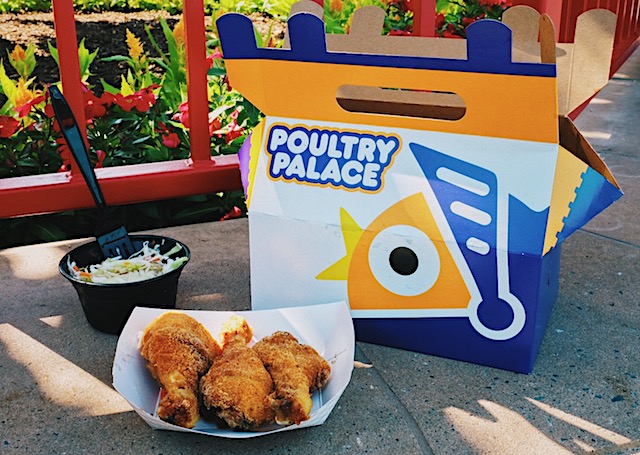 You could order a turkey leg ($11.49) or corn on the cob ($4.79) here, but you can find those plenty of other places in the parks. The signature item here is the three-piece chicken leg box ($9.99), served with cole slaw. These are roasted chicken legs with a nudge of spice — not quite as heavy as fried chicken would be, but with three legs in a box, this is more a meal replacement than a midway snack. 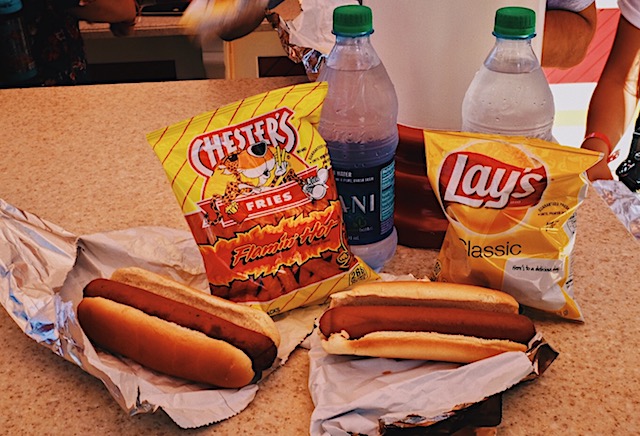 You've got two choices here: The spicy Angry Dog ($7.99) and the Slightly Annoyed Dog ($6.99) Why "slightly annoyed?" Because after a bite of each, you'll realize that you should have ordered the much more flavorful Angry Dog instead of this plain, old hot dog. Each dog comes with a bag of either Flaming Hot Cheetos or plain potato chips (guess which one is which). Save yourself a buck by skipping the side, if you'd like. 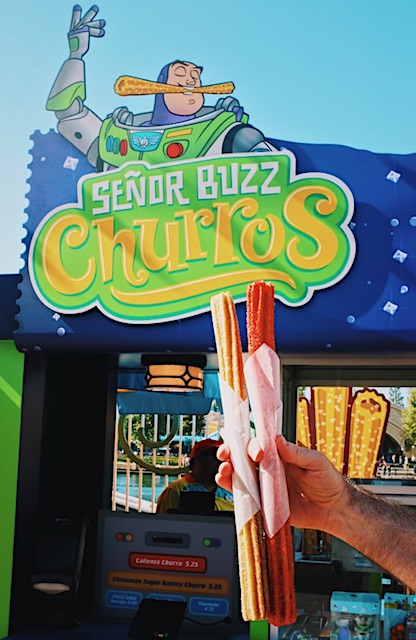 Oh, good heavens, not more churros! The Cinnamon Sugar Galaxy Churro is Disney's regular churro with a hint of glitter while the Caliente Churro (both $5.25) tastes like Cinnamon Red Hots. We'd slot that one in at number four on our overall list. 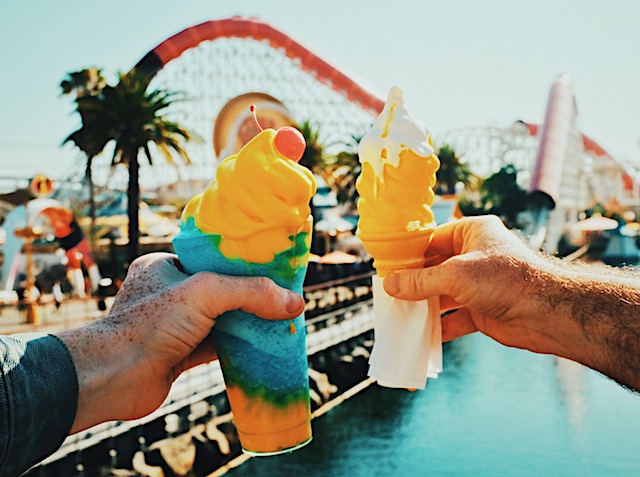 By far Pixar Pier's most popular new snack service eatery, these frosted treats didn't win us over with their simple, too-sweet taste that just didn't seem worth the wait. It's a lemon drop, in frozen form. Nice, but if I'm craving dessert, I'm heading over for a Num Num, instead. Still, the Pixar Pier Frosty Parfait ($5.99) and It's Snow-Capped Lemon! ($4.59) cone make nice photos.

Looking for something more substantial? Then it's time to head over to Lamplight Lounge, Pixar Pier's gastropub and home of enough adult beverages to make you forget all about the kids. (We Tweeted the full 10-page menu across three Tweets.) 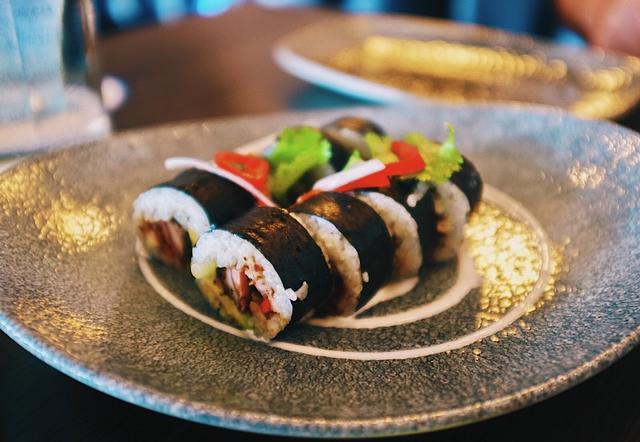 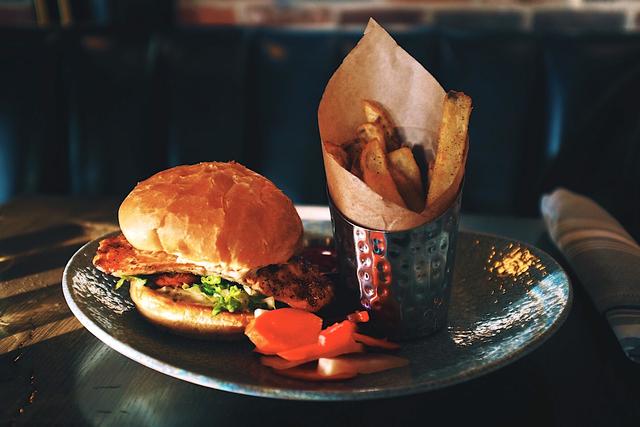 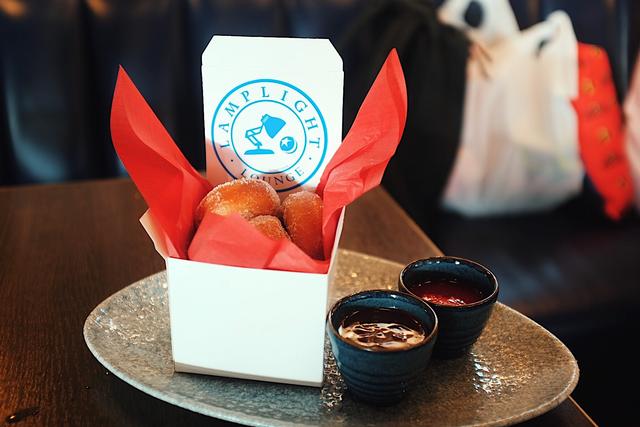 The Carne Asada Roll ($17) was a nice surprise, with flavors that came together well, though I don't know that they improved over what was a pretty nice steak on its own. Brian liked the Chicken Sandwich ($21), with its spicy (and messy!) chili glaze, and I enjoyed the pancetta on the Salmon PLT ($23), though after all those sweets earlier, I pushed aside that carby bun to focus on the tasty protein within.

The Donuts ($9) were amazing, not needing either of the dipping sauces, though the Nutella-esque chocolate sauce would make a good dessert on its own.

Next: The debut of the new Incredibles float in the Paint the Night parade

Take a ride on the Incredicoaster at Disney's new Pixar Pier

"time might prove the most popular new attractions in the land to be its food."

I'm not sure if that's an indictment of the lackluster attraction and land overlays or a compliment to what appears to be mediocre food. Aside from the Lamplight Lounge, the menu items look to be as "meh" as Incredicoaster. It's difficult to relay the taste of a spicy hot dog, but personally, I'd rather have seen them go for some more creative toppings in addition to varying levels of heat in the dog.

I guess this is what happens when Disney is rushed into doing something to goose attendance. Hey, at least they'll be counting their profits all summer as Incredibles 2 is a certified, record-breaking juggernaut, and that popularity will give Disney the boost they're looking for at DCA.

Question about the Lamplight Lounge. I never dined at the Little Mermaid character restaurant. I also never felt compelled to wait in the line for the Cove Bar. Have those two venues now merged to become the Lamplight Lounge? Is seating all going through one entrance now, or will there still be two entrances - one for meals and one for the upper level bar that overlooks the launch area for the coaster. Thanks.

Great point from Russell, this rushed, cheap overlay that dramatically worsens the area is going to haul in huge crowds and big bucks for the company. Incredibles 2 (rightfully so it seems) is a massive hit, and the much less creative Pixar Pier will see Disney reap even more benefit. DCA had been trending so well, too, but I think from an artistic standpoint it will forever remain the black sheep of Disney's domestic parks.

Yes, Rob, the Cove Bar and Ariel's Grotto and now combined as the Lamplight Lounge. One entrance. It's a very bar-centric menu, with eight pages of alcohol, one of mocktails and one page of food. And the food is mostly apps, including the Lobster Nachos. For a meal, there are four sandwiches (we tried two), a salad and the ratatouille.

In essence, Ariel's is gone and it's all now a Pixar-themed Cove Bar.

How is this rushed? They planned this for over a year. The food is already proven a hit. The Incredicoaster was anticipated for so long. Seems like Pixar Pier will open successfully although 2 more rides have yet to finish construction.

"How is this rushed? They planned this for over a year."

They announced Pixar Pier in October 2017. Considering the quality of what has been revealed so far, it's unlikely planning for this happened more than a couple of months prior to the official announcement. Pixar Pier reeks of a last second decision to do something to piggyback on Incredibles 2 and to give DCA an attendance boost ahead of Galaxy's Edge in 2019. All of the rumors pointed to a Marvel Land coming, but this cheap reskin gets slipped in between Guardians and Star Wars because Disney needed a quick fix after Anaheim nixed the Eastern Gateway plans, and to keep fans happy while they wait for the big addition next year (they saw people were delaying trips in 2018 waiting for Galaxy's Edge, and needed something to stabilize attendance in the run-up to what is likely to be the most popular theme park addition in history).

"The Incredicoaster was anticipated for so long."

Really??? They took it down in January, so if 6-months is "so long" then the time to build Galaxy's Edge must seem like an eternity.

"Seems like Pixar Pier will open successfully although 2 more rides have yet to finish construction."

If "successful" is measured in attendance gains divided by amount of money spent, then yes, I think Disney brass will call Pixar Pier successful. However, Disney and its fans hold their creative teams to a higher standard, and expect such additions to last the test of time. In that respect, Pixar Pier should maintain and grow those increases over the next decade without further additions, to which I think the new land will fail to do. The moving of a kiddie flat ride to a currently empty concrete pad and the reopening of a carousel, which rarely had lines over 10 minute on the busiest of days, doesn't move the needle any further. I would even say that the fact that Disney couldn't even open Pixar Pier fully realized demonstrates how haphazard and poorly conceived this land is. Disney teased the Inside Out attraction as if it was going to be something new, only for it to be a relocated kiddie ride from the soon to be defunct Bug's Land.

More power to Disney for being able to squeeze blood from a rock, but theme park fans need to hold Disney to task as they did with DCA 1.0, and not support lazy reskins like Pixar Pier. Not only was Paradise Pier ignored during the DCA 2.0 renovation, but when they finally get around to the land, they half-a$$ it on the cheap and market it as if it's the next coming of Fantasyland. That's what irks me more than anything, the over-publicizing of Pixar Pier and the tease of "more to come" only for it to be the relocation of a ride already in DCA.

The food is only a hit because it's different from what is currently offered in the park. Once all the season passholders have gone around and tried it all, the lines will die back down. Very few of the new items have staying power, which seems to be the MO for the entire land (lots of shiny newness, but not much to see once you've experienced it once).

Disney 'paints the night' with a new Incredibles parade float

Take a ride on the Incredicoaster at Disney's new Pixar Pier