Who's got the best fried chicken at a theme park?

July 6, 2018, 1:10 PM · It's National Fried Chicken Day, and yeah, we'll play along. Disneyland and Knott's Berry Farm are promoting their fried chicken dinners this weekend, with Knott's offering 10 percent discounts today between 11am-2pm and 8pm-10pm. But which chicken dinner is better?

And why stop with those choices? I've added four more theme park fried chicken meals that I have enjoyed over the past few years, for your selection. Which one of these is your favorite for a fried chicken fix? 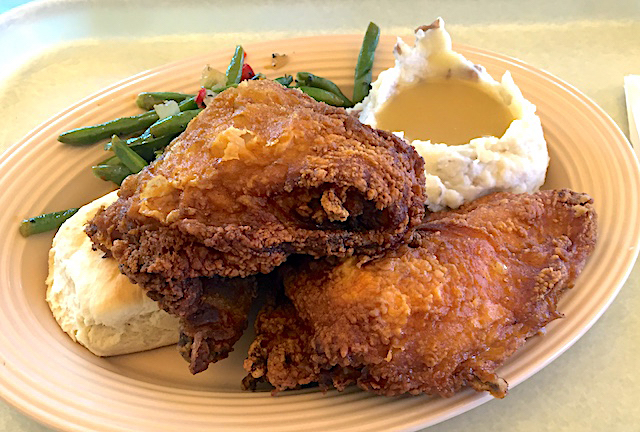 Disneyland's Plaza Inn is my favorite for a complete fried chicken dinner. Three pieces of beautifully fried bird, complemented with mashed potatoes with gravy and sauteed green beans — it always looks like way more food than one person could eat, yet somehow I finish it all, every time. To be fair, when I do, that's it for the day for food at Disneyland. I am full! 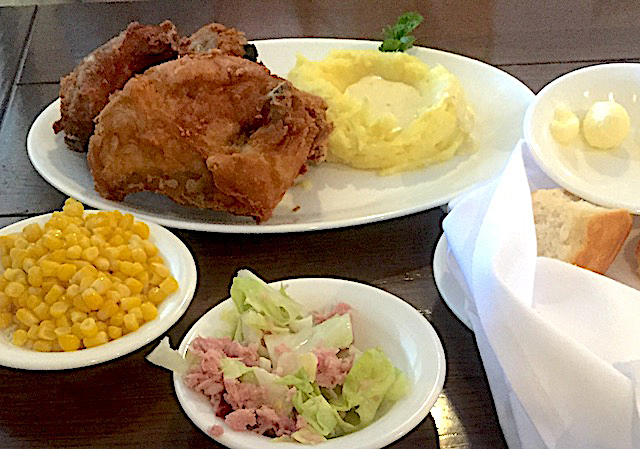 Mrs. Knott's Fried Chicken Restaurant is older than Knott's Berry Farm itself, and is the reason why Walter Knott build the park in the first place — to entertain people waiting in line for chicken dinners. Including way more than what Disneyland's Plaza Inn offers, including pie for dessert, it's a great choice, But I still prefer the Disney meal just because I think the chicken tastes better there. YMMV, of course! 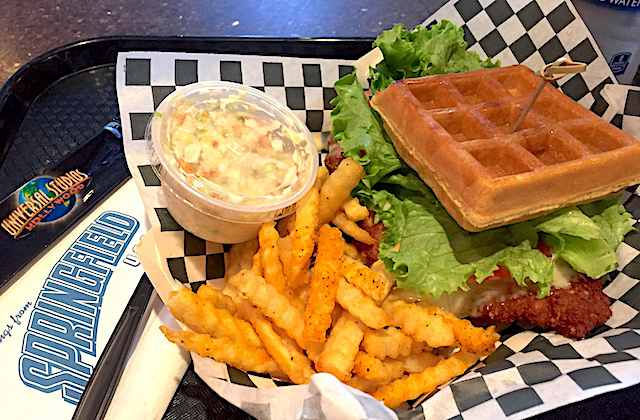 Now, for other options. Cletus' Chicken Shack at Universal Studios Hollywood (and Universal Studios Florida) offers a sneaky-good fried chicken, especially when served on waffles as a sandwich. Is it a destination meal? Not for me, but if I ever tire of The Three Broomsticks, this is my go-to choice at USH. 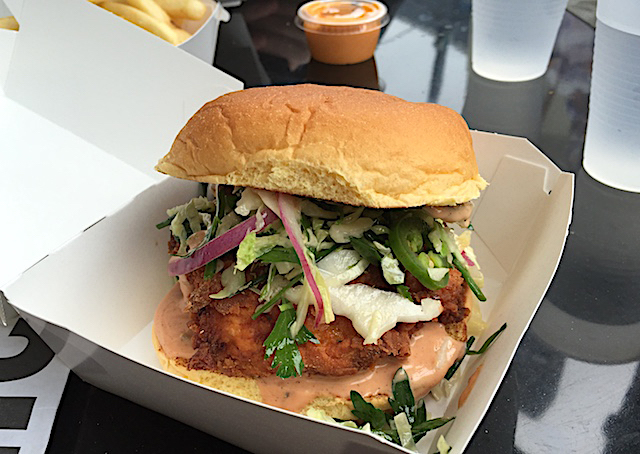 But I think an even better fried chicken sandwich at Universal's Hollywood property is waiting at CityWalk Hollywood's Ludobird. The work of celebrity chef Ludo Lefebvre, Ludobird's fried chicken offers a welcome kick of spice. 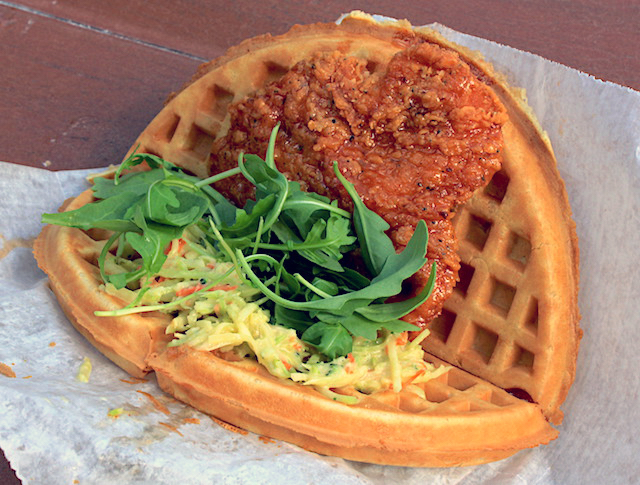 For many theme park fans, though, the place to go for a spicy fried chicken sandwich is Walt Disney World's Sleepy Hollow, which keeps taking and adding this sweet and sour fried chicken waffle sandwich from and to its menu. 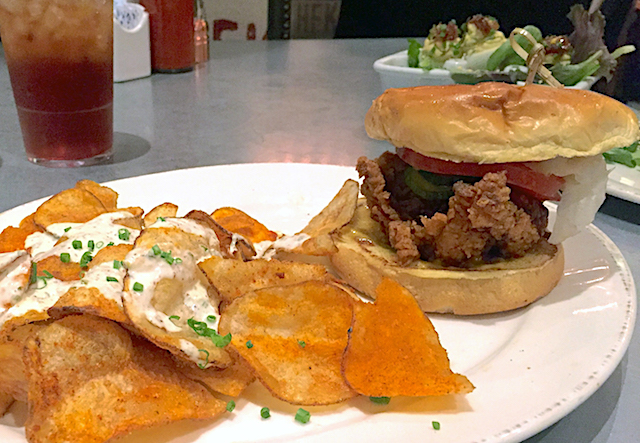 Yet my favorite fried chicken in Orlando is at Chef Art Smith's Homecomin' in Disney Springs. Available in a variety of entrees, I've ordered it as a sandwich in this photo, but many fans rave about the Fried Chicken & Doughnuts indulgence, too.

Of course, theme parks offer many more options for fried chicken. If you have a favorite I haven't listed, please share it with us, in the comments.

The chicken at Art Smith’s is so good. I usually get the thigh high chicken biscuits with hot honey and add one of their delicious sides. Man that guy makes good chicken.

Of course I voted Mrs. Knott's, but Aunt Granny's at Dollywood is pretty good.

I also voted for Mrs. Knott's. I think the chicken at Plaza Inn is practically perfect in every way, but the chicken soup that comes with Mrs. Knott's dinner tips the scale heavily in favor of the "House of Boysenberry."
If given the opportunity - I'd have quickly voted for Miss. Lillian's Chicken Dinner at Dollywood. The food is fantastic, and Miss. Lillian has unbelievable charisma, making a meal there feel extremely homey.

Knott’s is way too focused on the sides and desserts at the expense of the chicken. There’s so much biscuits, corn, mashed potatoes, pie, and boysenberry sauce that I was too full to eat the dry fried chicken. I prefer the far more juicy fried chicken at Plaza Inn.

Got to get back to Miss Lillian's soon!

Whenever best theme park food is rated/voted, Dollywood should ALWAYS be on the list.

I absolutely love Knott's Berry Farm back when the Knotts still owned it, and at the time I would've told you that their chicken was great. But I tried it again recently, and found it very bland. I don't know if the quality has declined, or if my own tastes have simply become more sophisticated. But the chicken served in the Chicken Dinner Restaurant wasn't anything that I would come back for. In fact, even fast food chicken like KFC or El Pollo Loco is a lot better.

Now there boysenberry jam? That is still tops.

I’ve only eaten there once, but Mrs Knotts was awful. Chicken was old and dried out to the point of being tasteless. Service was so slow, too. Sides were not bad, but the gas station by my house has better chicken.

Mrs. Knotts is absolutely fantastic and still the best reason to visit that park after all these years.

I have actually eaten most of these Fried Chickens on the list (both Cali and FL).

Nothing is better than Homecommin, I am sorry to say. That chicken is a transcendent experience.

I will agree that Knotts is pretty good and both Cletus and Sleepy Hollow are some hidden finds, but if you want the best fried chicken in a theme park (or ever), I would get a plane ticket down to Disney Springs.

Not long ago I had Plaza & Knotts chicken on consecutive days. Liked them both, but couldn't really say I preferred one over the other. Some friends think Knotts breasts are a bit dry, but I'm a dark meat man, so can't comment on that.

That chicken and waffle sandwich at Universal Hollywood looks a hell of a lot better than the one I had in Orlando, where the waffles looked like they were pulled out of an Eggo box. I do regret not having Miss Lilian's on my sole trip to Dollywood, but we weren't in the park very long either day we were there.

This article made me miss Doc Brown’s chicken at USH. If only I could go back in time to get it.

Hi Robert. Do you know if the chicken at Carnation Cafe is same as Plaza Inn? I remember it was exceptional, plus eating right on Main Street is a fun experience.

I just hate hot Knotts basically forces you to get that giant meal. They need smaller size options and the a la carte prices are ridiculous in comparison. Sorry I don’t need that much food.

Mrs. knott's historically, is the best though I heard quality has gone down this past year. Kletus, formerly Doc brown chicken prior to the Simpson set, is pretty good, too.

This was the hottest day in Disney theme park history

Top things to do at Disney when it's over 100 degrees