Step inside for a first look at Universal's Aventura Hotel

Universal says that the Aventura will hit the same price point as the Cabana Bay across the street, but this 17-story hotel features a sleek, modern look instead of the Cabana Bay's mid-century kitsch. With in-room tech that includes tablets that control everything from the TV and temp to your room service order, Universal and its long-time hotel partner Loews are going for an upscale vibe... but at a value price. 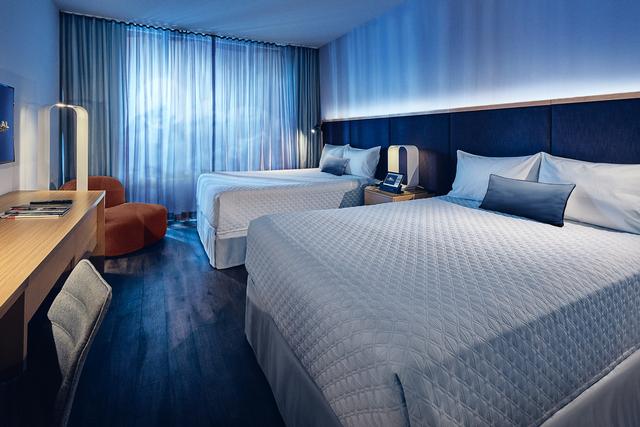 When you look around the hotel, you can discover where Universal made its trade-offs to hit that price point. There's no full-service dining, just a station-service food hall on the ground floor. The rooms feature gorgeous floor-to-ceiling, wall-to-wall windows, but can seem a bit tight when you turn in and look away from the views. The look throughout is clean and modern... which is another way of saying "plain." And those fancy tablets? They can save on labor costs, if guests use them to take charge of their room experience.

But is that a bad thing? People come to the Universal Orlando Resort to hit the parks, not just to lounge in their rooms. And the views that guests will have at the Aventura certainly should entice them to get out there and enjoy the resort. (Just maybe consider one of the other five hotels at Universal Orlando if anyone in your family has a fear of heights.)

Come along for our sneak peek at the resort:

Curiously, while we invited reporters were escorted through the Aventura for three hours tonight, we were booked to stay next door at the Cabana Bay. So I can't speak to what it's like to actually stay at the new resort, though Universal and Loews have established an excellent track record over the years for service and value at the resort's hotels. The Aventura opens to the public on Thursday, August 16, so we should get our first reviews from paying customers shortly after then.

It's indeed strange they don't let you sleep there but I guess they are not ready yet (typically Universal). I love the sleek modern look as my home also has the same style (even more modern like this). It's relaxing. I also like the so called high tech features although smart home/domotica is quite common right?
The rooftop bar is a huge plus, love it, perfect hotel for HHN.

Universal is catering to childless Millennials far better than Disney is.

Universal said the plan is to roll out the in-room tech to all UOR hotel properties at some point.

The tech is cool, and seems to really be catching on in the industry - we first experienced it a couple of years ago at the Encore (next to the Wynn) in Las Vegas. The tablet control had a bit of a learning curve, even for someone like me or my wife who are both decently tech savvy, but the need for it seemed greater for a suite, which is the type of room we had at Encore, versus a single room with limited features. I can see the applicability of these master control tablets for larger rooms and suites with lots of integrated systems/features, but for a room with a TV, HVAC, fridge, coffee maker, phone, and a handful of lights, the presence of this level of tech seems to be a bit of overkill.

Tablets have been getting cheaper and more reliable in recent years, so converting to this technology not only hits on the cool/modern factor, but does so without significant expense in initial cost or maintenance. It also allows Universal to tout their "green" angle, which the company likes to do from time to time. However, I wonder if it might have been smarter for Universal to slowly develop and test an app that guests can use on their phones to connect and control all of the electrically powered equipment in their hotel room. If they're already equipping rooms with smart-switches and the like, why not eliminate the cost of the tablet altogether, and just let guests use their personal smart phones? Perhaps these tablets are the bridge to that future.

My impression of the hotel is that they're trying to position this as a "moderate" resort (in Disney terms) along with Sapphire Falls, which lies between the value-priced Cabana Bay and the deluxe Hard Rock Hotel, Royal Pacific, and Portofino Bay (the last 3, which in addition to nice rooms closer to the parks, also include Universal Express). While Aventura doesn't have its own table service restaurant, it is close enough to Sapphire Falls (probably no more than a 2-minute walk from the hotel lobby) to take advantage of that resort's sit down restaurants, not to mention the water taxi, which is what most differentiates Sapphire Falls from Cabana Bay (not necessarily the table service restaurants).

Now, Universal could be attempting to reconfigure their hotel tiers in advance of the Endless Summer Resorts, which will not be directly adjacent to the wholly Universal-owned property. In order to simplify and consolidate the tiers, Universal may be setting up Cabana Bay to be on the same tier as Sapphire Falls and Aventura, which are differentiated from PBR, HRH, and RPR by not offering UE but still on Universal property "proper", while the Endless Summer resort would backfill the space Cabana Bay currently occupies on the value end of the spectrum with almost mandatory bus service needed to reach the parks. In any event, this is yet another step in the right direction for Universal, and by continuing their strong partnership with Loews, they are free to focus on things aside from running hotels, which is something Disney has never been able to get away from.

BTW Robert, do you get to go up to Bar17? Universal has been touting the rooftop bar/restaurant for some time now, and you would think that would have been a highlight of the tour. Honestly, I'm pretty surprised they're making their deadline (I guess they don't have a choice since they started filling rooms over a year ago), because they were still doing exterior finishing work of the structure when we were there in mid-June.

Re: @Russell Meyer, guests using their own smartphones instead of a tablet in every room: What if the guest doesn't have a smartphone? Or the memory to install the hotel's app? Or otherwise dreads the inevitable hassle of installing it? Easy solution: Keep a limited supply of loaner tablets. Looks like Universal has gone with the solution that's even easier (from an IT administration standpoint) but more expensive, that of supplying tablets directly. (I hope they keep enough spares at the front desk for inevitable breakage, the way hotels keep spare toothpaste and razors.)

BYOD ("bring your own device") is the approach airlines are taking -- incrementally remove the seatback entertainment system (and all associated weight and maintenance) and allow passengers to stream the onboard content to their own devices. (I tried that and discovered that United's "Private Screening" app is incompatible with my generic Android tablet.)

How does the hotel keep guests from absconding with the tablet? If it's anything like the policy with Handy-brand tourist loaner-smartphone found across Asia, the hotel will monitor for its loss and charge you.

OK so I have a few things - Now I will first say I do think differently than many folks. I am jaded and a bit salty....

The hotel is beautiful and modern but I do wonder about a child who decides he is hungry and want ice cream late while parents are sleeping? Might cause some problems... Of the same child ordering too many items, banging on the Ipad like a rabid Monkey while the adults are at the rooftop bar and child was sleeping when the left... (This will happen)..

And the I was thinking how clean the Ipads will be... So many folks doing whatever then touching the Ipad... Just throwing it out there folks...

"And the I was thinking how clean the Ipads will be... So many folks doing whatever then touching the Ipad"

As clean as a TV remote or light switch in a normal hotel room, if not cleaner, since the screens will clearly show smears and fingerprints. The one we had at the Encore was clearly wiped down every day by housekeeping (probably with some type of anti-bacterial wipe or electronics/glass wipe).

This is no different than PPV, room service, or check-out performed through a standard TV remote. If parents think their kids may try to cause mischief while they're away, they can place locks on the remote and limit purchases made to the room, just like any other hotel. If unruly kids order a dozen pizzas that get made and delivered to the room, that's on the parents to pay for and sort out with their misbehaving children.

Thanks Russell - When we travel I always have Lysol wipes and wipe down the TV remotes and switches.

Then I was also thinking what happens when said Ipad gets mystically breaks or stolen... "We did not steal that Ipda" but little Jimmy has it in his backpack. Not knowing it will only work in said hotel..

"Then I was also thinking what happens when said Ipad gets mystically breaks or stolen..."

No different then when you "borrow" those nice terrycloth bath robes that strangely end up in your suitcase or that bottle of Fuji water that mysteriously disappears from atop the dresser - The credit card you provided for incidentals at check in is charged to replace the missing item.

Valid points Russell… But you damn well know folks will say they did not steal the missing Ipad and will publicly complain how they were mistreated and overcharged.

I like to think as how the business plan will run when executed and what might go badly.

Only thing missing at this hotel is a floor with a Casino..

@Brian Emery As with a iPhone they can track the iPad easily. I expect non of the problems you are mentioning that are unique for this hotel. Also I expect the order button can be locked for the kids room although I hardly think a lot of kids will be seen in this hotel. There are no slides, no sand strand, no games (except for the vr thing) and the kids options in the menu is very limited. This is a hotel for adults who want a relaxing vacation with a rooftop bar.